In the middle of the coronavirus pandemic, as she was working full-time and taking care of her two young daughters, Dana McSwain was diagnosed with Stage 2 breast cancer that had spread to her lymph nodes.

The 36-year-old from Charlotte, North Carolina, had no known family history of breast cancer but on top of her diagnosis, McSwain also learned she had the BRCA2 gene mutation. 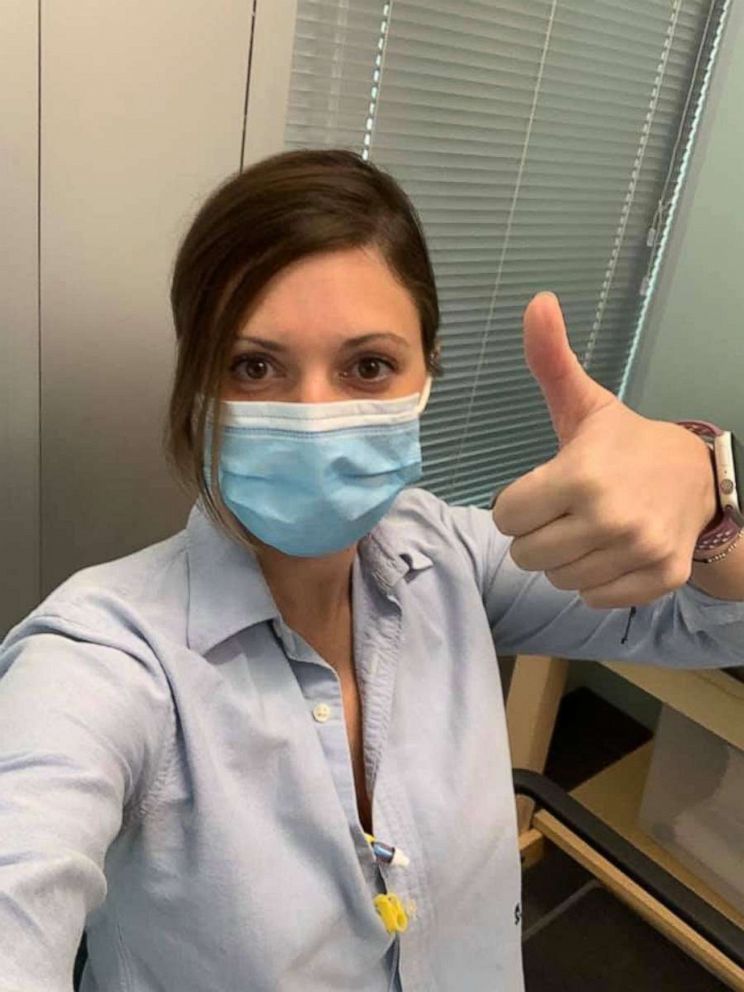 Less than two weeks after her diagnosis, McSwain, who also has an 18-year-old stepson, started chemotherapy.

Shortly after that, McSwain faced a moment she had been dreading since her diagnosis -- the loss of her hair due to the chemotherapy treatments.

"You kind of accept the cancer diagnosis and move on to the next step. So now I’ve accepted cancer and prepared myself to go through chemo, which means losing my hair," she said. "As a woman, your hair may not define you but it sets you apart. I’ve always had long hair and I started to mourn that even before it was gone."

"I remember my second chemo was on a Thursday and that following Saturday morning I took a shower and washed my hair and it came out in handfuls," said McSwain. "I got out of the shower that day and looked in the mirror and texted my whole family and said, ‘It’s time to shave my head.’" 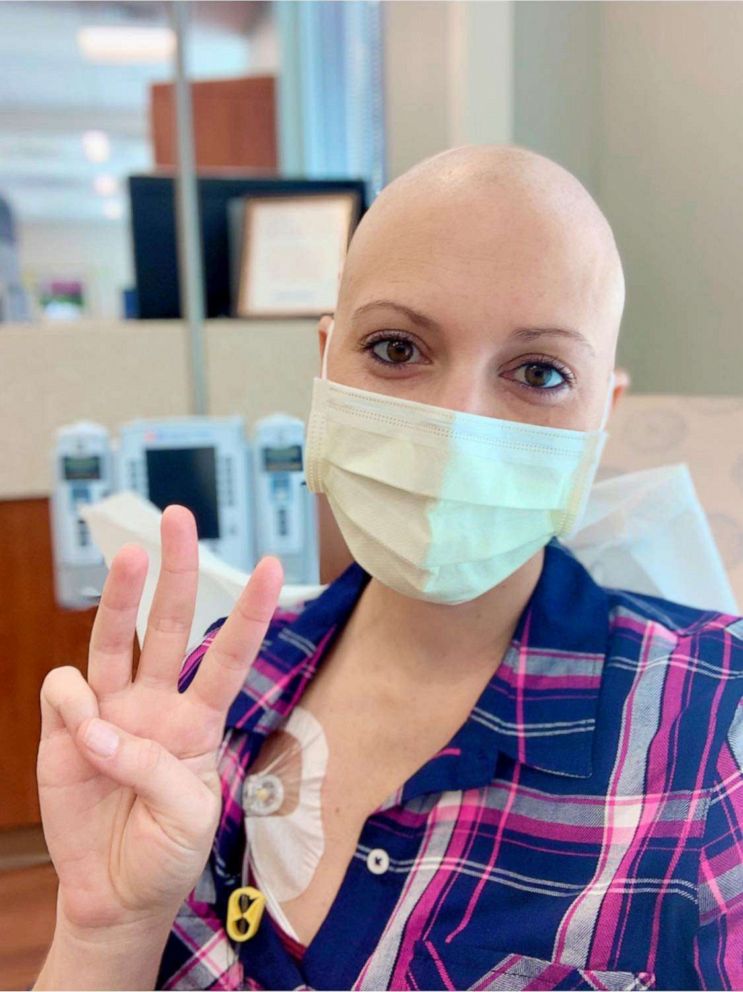 McSwain shaved her head bald and found herself frustrated at not being able to find a wig that made her feel like herself, or one that was not too expensive.

"Finding a wig is an extremely hard process, especially not knowing where to begin because this has not been anything that I ever thought that I’d go through," she said. "Every wig I put on I couldn’t get it off fast enough. I thought, ‘This is not me. This doesn’t work.’"

McSwain coped with her cancer battle by journaling at night, and one night she posted on a local Facebook moms' group about her frustrations.

"I went online one day and told them what I was going through and included a picture of myself. I just needed some support," she said. "I wrote out about wanting to get outside, mourning my hair loss and just asking for advice and tips."

On the other end of the Facebook post was Carol Daley Cook, a registered nurse whose daughter goes to the same school as McSwain's.

"I got to thinking, 'I have this really long hair, like down to my waist, and my poor friend is losing her hair to cancer,'" said Daley Cook, who had the idea to make a wig for McSwain, even though she had no idea how to do it. 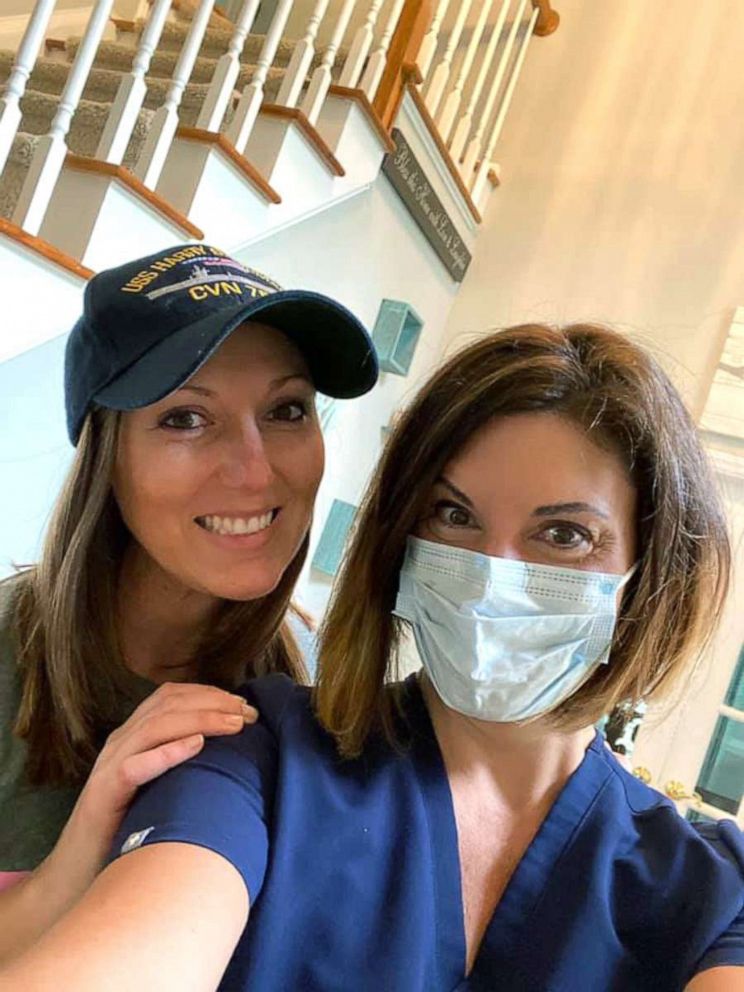 "I put a note out just asking if there was interest in getting this [wig] made for her," she said. "I had no idea how and then I found a place online, a woman in Tampa [Florida] who custom makes halo wigs."

Just hours after Daley Cook posted on Facebook, she had enough donations to pay for the wig and have it made by Christine Heinen, the owner of Chemo Diva, using the hair of McSwain's friends and strangers alike.

"Five women and one 7-year-old girl donated their hair," said Daley Cook, adding that the 7-year-old dropped off her hair donation along with a card urging McSwain to "fight like a girl" in her battle with cancer. 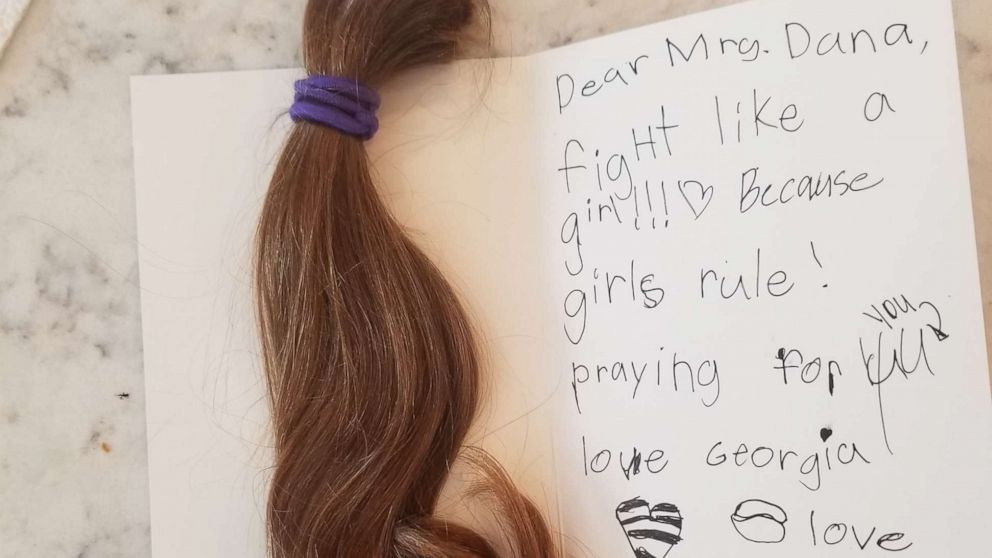 Carol Daley Cook
A 7-year-old girl donated her hair to Dana McSwain, who is battling cancer.

Just over one week after having the idea to make a wig for McSwain, Daley Cook was able to personally deliver it to her house.

"When I opened it, I knew immediately what it was," said McSwain. "The feeling of it had a different feeling than synthetic hair and I knew it was real hair and I knew Carol [Daley Cook] had cut her hair so I knew that’s what it was."

"Looking at that wig and seeing the different colors and how it came together and knowing that every strand is something special and from someone special in my life, it was truly amazing," she said. "It was such an indescribable feeling."

McSwain said she kept the wig on for the rest of the night and found herself looking in a mirror for the first time since she shaved her head, brushing her new hair and taking selfies.

"I would not take it off," she said. "It just looked like me again and I recognized myself."

Daley Cook said she cried too when she saw McSwain put on the wig and smile.

"I’m blessed that we could help her and do something to uplift her during this tough time," she said. "We can’t get together. We can’t go have drinks, but we can still rally around each other. The power of women banding together, you can’t underestimate it." 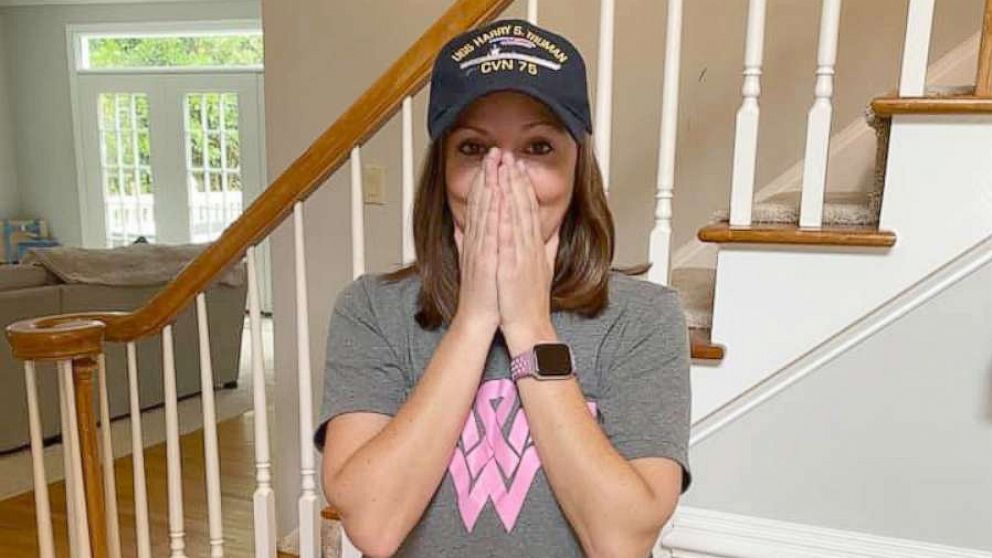 Courtesy Dana McSwain
Dana McSwain reacts to being surprised with a custom-made wig during her battle with breast cancer.

McSwain, who faces a double mastectomy and radiation treatments after finishing chemotherapy, said she is "living proof" that there are still people who "want to do good, even during a time that's so scary."

"Cancer is a club that nobody wants to be in but when you walk through it and realize not only are you not alone spiritually but you have a community surrounding you, it’s an overwhelming sense of strength," said McSwain.

Editor's Note: This story was originally published on July 28, 2020.