Christine Kump, of Channahon, Illinois, was newly pregnant with her second child late last year when she felt a lump in her breast.

She said it was in the same spot as a lump she had developed when she breastfed her now 3-year-old daughter, so she brushed it off as leftover scar tissue.

"When you Google it, it says it could be breast cancer, but most likely scar tissue," Kump, 34, told "Good Morning America." "I thought there's no way I have breast cancer."

Kump underwent IVF to get pregnant with her second child, so she also attributed the soreness she felt in her breast to side effects from the treatment. When the soreness continued and a burning sensation developed though, Kump went to see her primary care doctor.

"The doctor sent me to do an ultrasound but she wasn't super concerned," said Kump. "A few weeks later I went for the ultrasound and then they had me do a biopsy, which I did on Christmas Eve."

A few days after the biopsy, on Dec. 29, 2020, Kump said her doctor called and told her she had Stage 3 invasive ductal carcinoma breast cancer.

"I was worried that I wasn't going to make it through the pregnancy," said Kump, who was eight weeks pregnant when she was diagnosed. "I was thinking I was going to have to write letters to my [3-year-old] daughter Susie for all of her milestones because I wasn't going to be there." 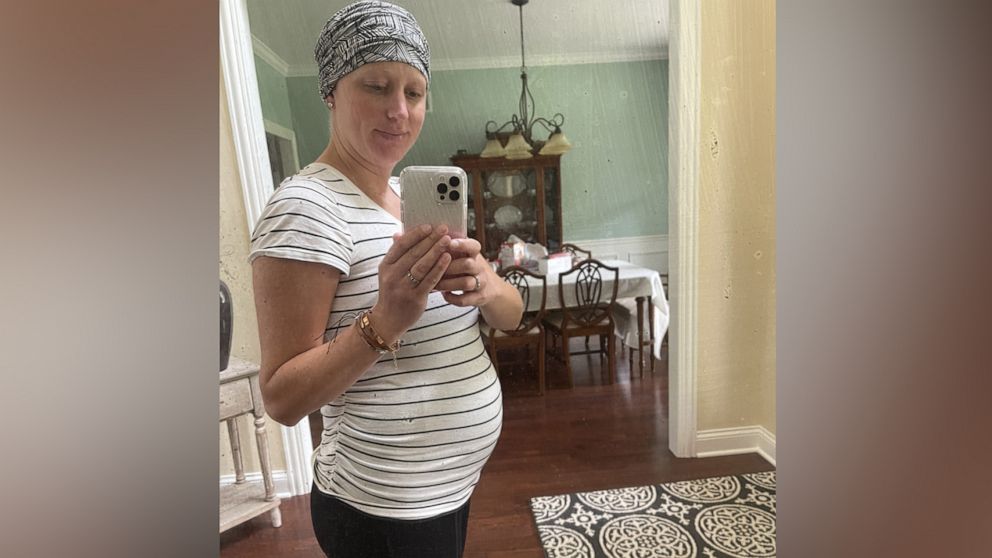 Courtesy Christine Kump
Christine Kump, 34, was eight weeks pregnant when she was diagnosed with breast cancer.

Because Kump had a history of cancer in her family, she underwent genetic testing and tested positive for the BRCA1 gene mutation, meaning she was at an increased risk for breast and ovarian cancers.

About 1 in every 500 women in the United States has a mutation in either her BRCA1 or BRCA2 gene, according to the Centers for Disease Control and Prevention (CDC).

Because of her genetic background and because her cancer was so advanced, Kump began chemotherapy once she entered her second trimester of pregnancy, a time that doctors say is safer because the baby's organs are more developed.

Kump was in the middle of her chemotherapy treatments in May, when she went into early labor.

She gave birth to her daughter, Vivian, on May 30, 2021, about three months before her August due date.

"She decided to show up super early," Kump said of her daughter, who weighed 2 pounds, 10 ounces at birth and faced complications that come from premature birth. "She was intubated for six days and then was on oxygen until she could breathe on her own." 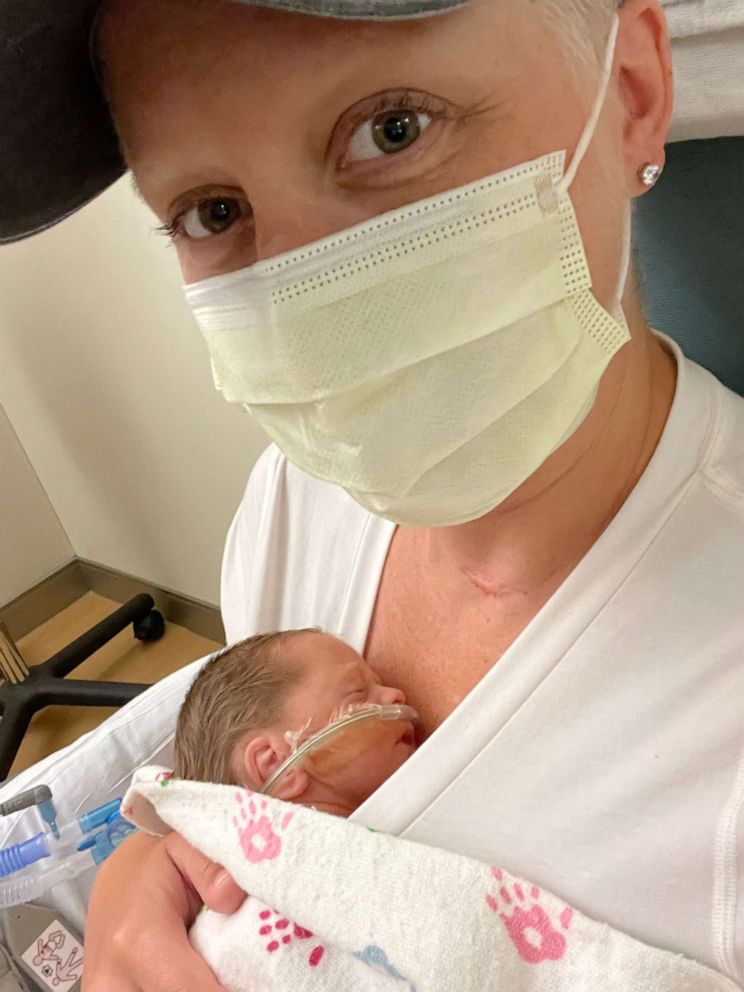 Vivian would go on to spend the next 59 days in the neonatal intensive care unit, which was 10 minutes away from the cancer center where Kump received treatment.

"My husband and I were the only ones who were allowed to see her in the NICU," said Kump, adding that she would go from receiving chemotherapy in the morning to visiting her daughter in the afternoon. "The NICU was the safest place for me to be because it was so clean." 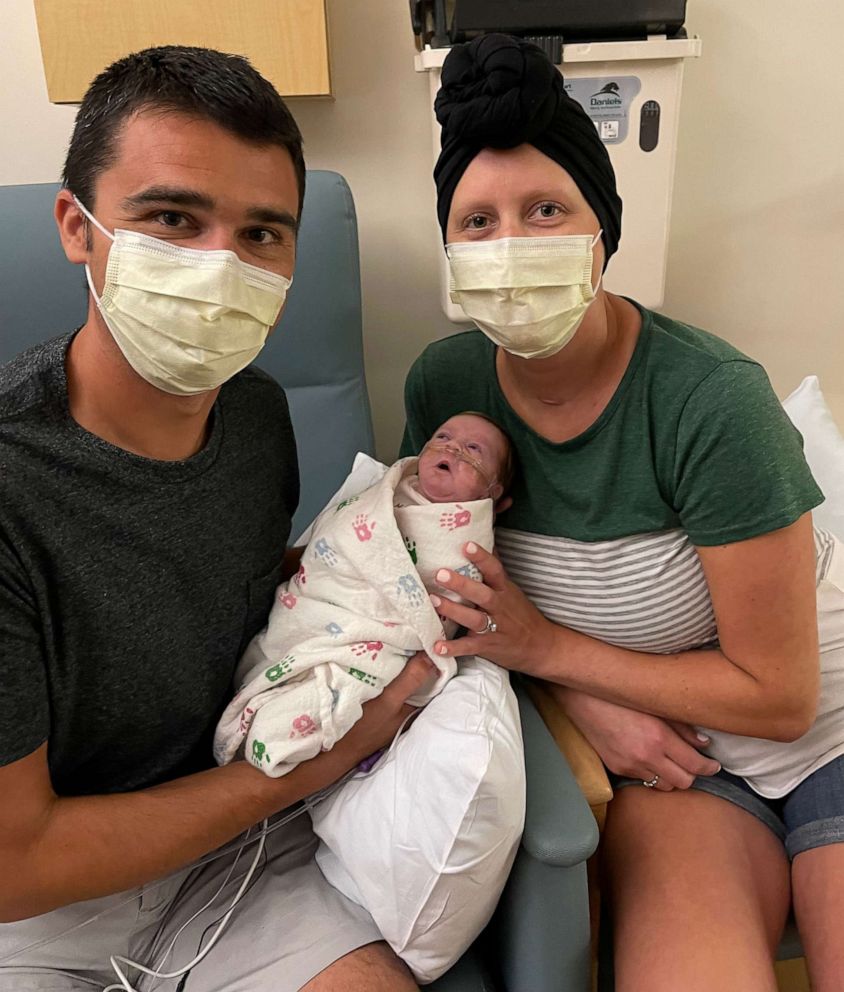 Courtesy Christine Kump
Christine Kump and her husband, Matt, hold their newborn daughter Vivian in the NICU of an Illinois hospital.

Kump continued on with chemotherapy after giving birth, completing 16 rounds in all. She finished her last treatment in August, shortly after bringing Vivian home from the NICU.

She will next have to undergo nearly six weeks of radiation treatment, and then will undergo a hysterectomy in January since the BRCA1 gene mutation puts her at a higher risk of ovarian cancer. 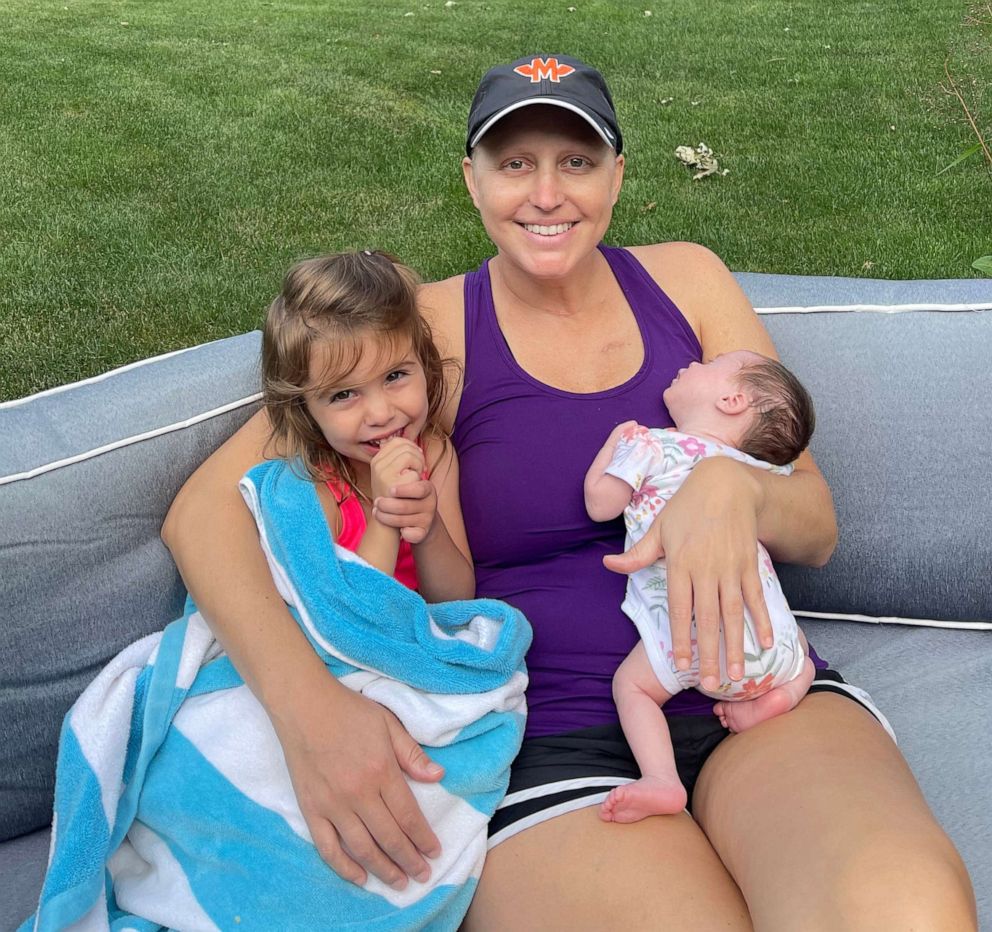 Kump said she is sharing her story publicly to both raise awareness of breast cancer during pregnancy, and to encourage women to listen to their bodies and seek help if something feels off.

Breast cancer is found in about 1 in every 3,000 pregnant people, according to the American Cancer Society.

"I was taken very seriously and was diagnosed on the first time, but a lot of women are told it's just an infection, or it's something from breastfeeding," said Kump, who, at 34, was six years below the recommended age of 40 to start annual mammograms. "If you think something is a little off, call your doctor, and if you don't like the response you get from one provider, get a second opinion. It's so important that we advocate for ourselves." 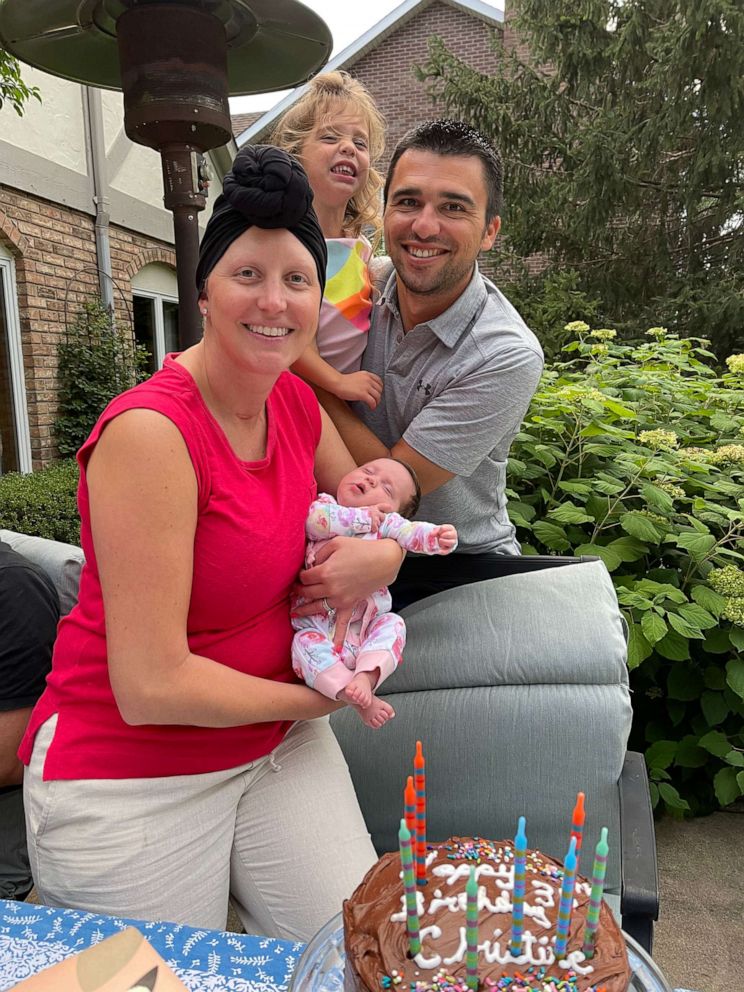 "If you're pregnant and see changes in the breast, the majority of time it is pregnancy-related, but if there is something that feels unusual, get it evaluated. It's better to be cautious," she said. "We have be our own advocates, be aware of our bodies and, if there are any questions, address them with a medical professional."