A breast cancer survivor has created a mobile app, called Feel For Your Life, to help women conduct breast self-exams.

"I found out there were three reasons women weren't doing self exams," Jessica Baladad, 36, told "Good Morning America." "They were afraid of finding something and not knowing what to do, they weren't comfortable with their bodies, and they didn't know how because no one's ever showed them or talked to them about the importance of a exam, so I thought, 'I need to advocate for this.'"

According to the National Cancer Institute, breast cancer is one of the three most common cancers in women. The NCI estimates there will be more new cases of female breast cancer than any other cancer in 2021, with a projection of 281,550 new cases.

Breast cancer is primarily detected through a mammogram, ultrasound, MRI or biopsy, and usually involves a combination of testing to ensure an accurate diagnosis. Mammograms can often detect tumors before a lump appears, so screenings are crucial for early detection.

"As a supplementary tool for women of all ages, self-breast exams can increase women's awareness of their body and what their breasts normally feel like," Dr. Elizabeth Comen, breast medical oncologist at Memorial Sloan Kettering, told "GMA." "As a screening strategy, it helps women identify any concerning findings such as new changes in the shape, skin, or nipple as well as any concerning lumps which may require further imaging and work-up." 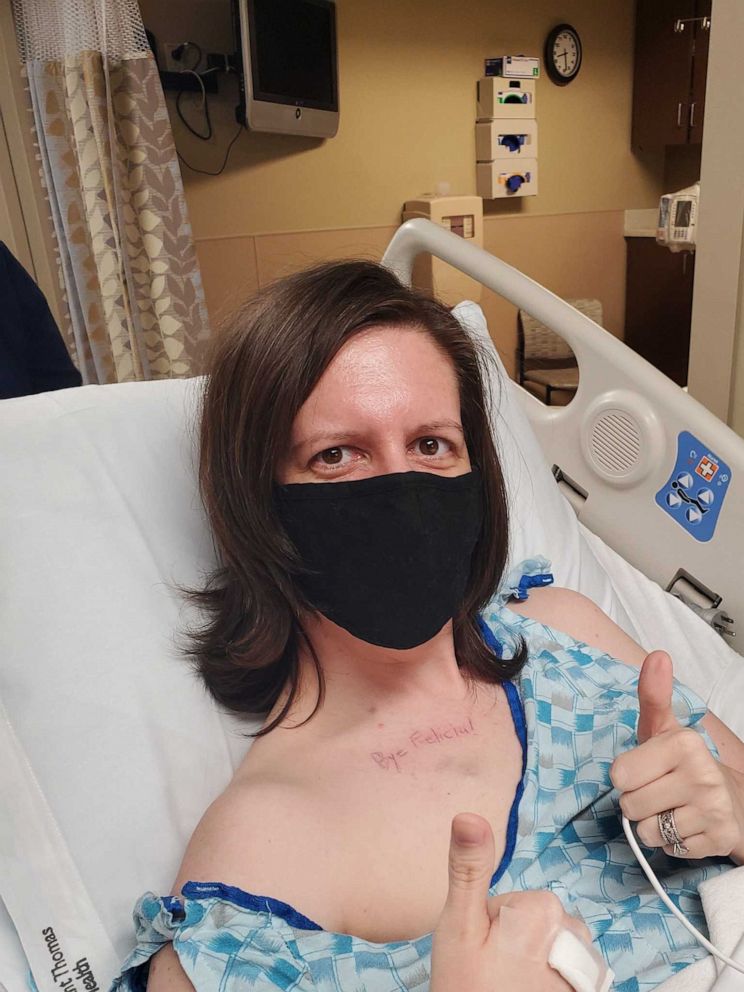 Most guidelines recommend women begin routine annual screenings once they're 45 years old; a recommendation that can leave younger women vulnerable to missing early detection of the disease.

For those under the recommended age for screening, Comen said that self-exams can have an important role in picking up breast abnormalities and prompt patients to seek out further care from their doctor.

"This is particularly true for women under the age of 40, for whom there's no routine breast cancer imaging screening recommendations," she said. "Since most of these women aren't indicated to have mammograms, many of these cancers are actually detected by women themselves, through self-breast exams."

Baladad has done regular self-exams ever since she had surgery to remove a benign fibroadenoma tumor in her breast when she was 18 years old, she said.

"I had a pain in my breast and I ran to the bathroom real quick, right before class, and I noticed there was a lump and it scared me," she recalled, adding that she immediately went to health services after class and it was from there that doctors discovered the tumor. "It was that experience that got me into the habit of doing self-breast exams throughout the rest of adulthood."

A personal connection to breast cancer

Breast cancer runs in Baladad's family on her father's side, with her great-grandmother, grandmother, five grand-aunts, and two aunts all having lived with the disease, she said. Fifteen years later after that initial scare, Baladad was diagnosed with breast cancer herself.

In March 2018, Baladad said she didn't do her routine self-exam that month because she was scheduled to see her nurse practitioner around then.

"I thought, 'Who better than my practitioner to do a clinical breast exam?' and when I saw her, she didn't say anything about a lump to me so I thought I was good to go," she said. 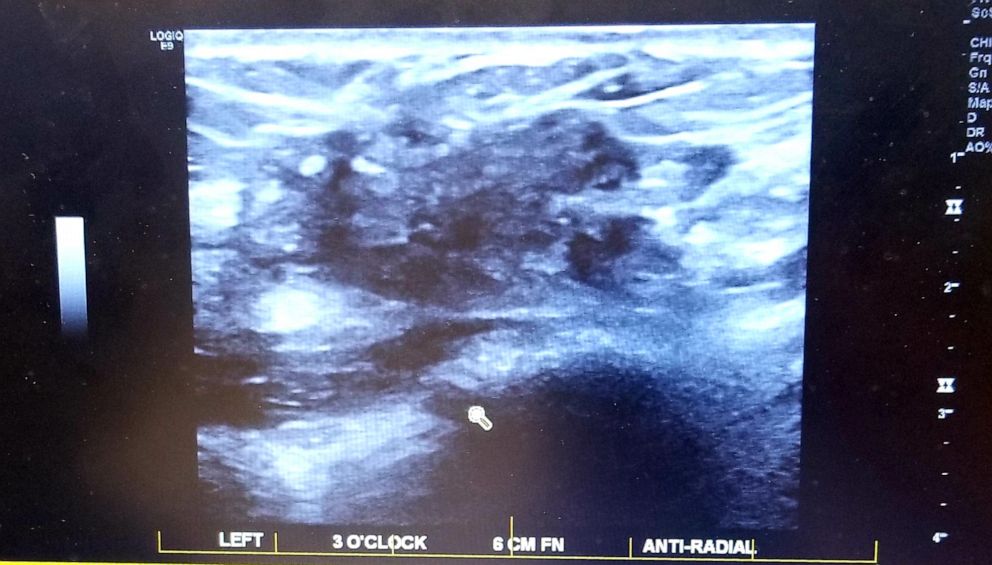 Courtesy Jessica Baladad
Imaging of the cancerous tumor in Baladad's left breast.
MORE: Breast cancer on TV: A history of the disease's depiction throughout the years

When Baladad did a self-exam in the shower just two weeks after her appointment, however, she found a lump in her left breast.

"I just started freaking out like 'This is it, it's cancer,'" Baladad said. "But then I thought, 'Wait. I'm working out in the gym almost every day. I take care of myself. I eat well. I just saw my doctor, surely she would've said something about this.'"

After calming herself down, Baladad went on with her life. But when an acquaintance posted about shaving their head due to having breast cancer, Baladad said she decided to get her own lump checked out in August 2018.

This time, Baladad went to a different doctor and had a mammogram, ultrasound and a biopsy. The lump was confirmed as breast cancer, making her one of the millions of women in the United States living with the disease at the time.

"I found out later that my original practitioner didn't tell me about the lump in my breast because she thought I was too young to have breast cancer and she thought I'd be fine," Baladad, who was 33 when diagnosed, said. "A self-exam saved my life." 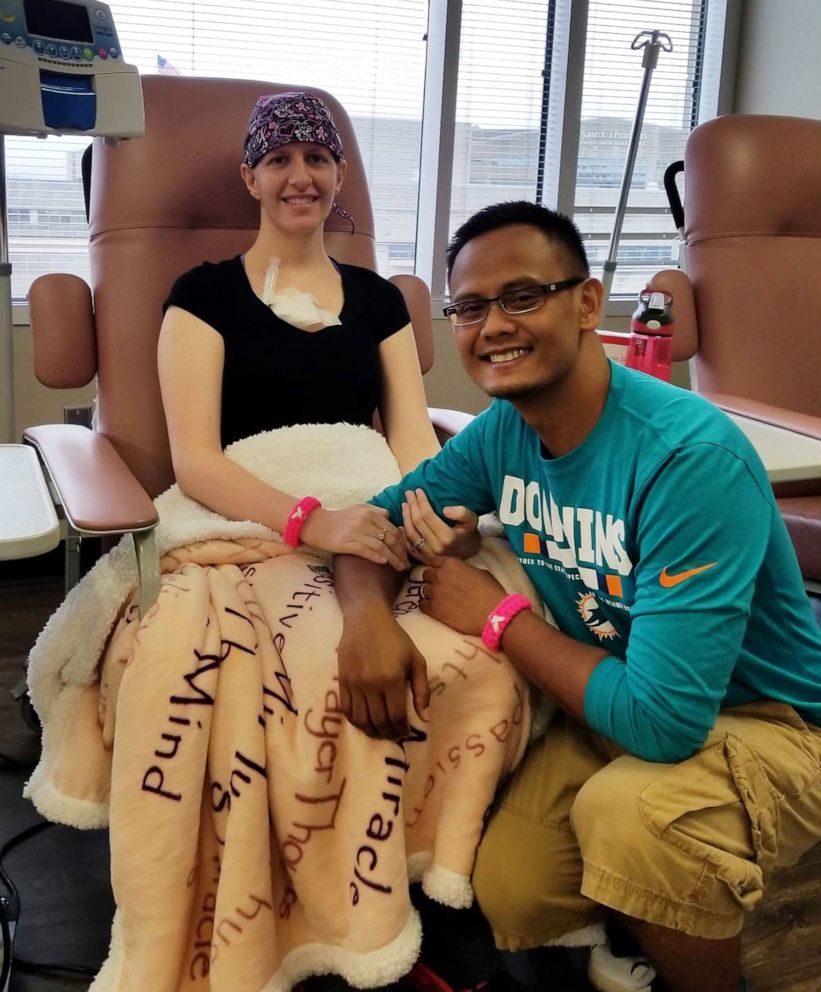 According to the Centers for Disease Control and Prevention, most breast cancers are found in women 50 and older, though age is not the ultimate determining factor. In 2018, CDC data found that there were 184 new cases of breast cancer in women ages 20-24; 1,173 in ages 25-29; and 3,300 in ages 30-34, with the number of cases continuing to increase thereafter.

"Most breast cancers are identified in women over age 50. That being said, younger women can get breast cancer too," Comen said. "Any woman, or any patient for that matter, who has an inkling that they need a second opinion, should get a second opinion. Intuition and trusting your doctor are critical for a therapeutic doctor-patient relationship."

Fortunately, Baladad's cancer has been in remission since May 2019 — but the road there wasn't easy.

"I did 16 rounds of chemo, a double mastectomy, 24 rounds of radiation, a hysterectomy, and back in February I had a 10-hour flap reconstruction procedure done where they took fat, tissue, and blood vessels from my abdomen and placed them in my chest," she said. "I have phase two of that surgery in October."

From a social media project to app launch

Baladad originally created Feel For Your Life as a social media project during her cancer journey, where she would share her story, as well as cancer statistics, and encourage women to perform self-exams and get checked out by a doctor.

"One night I was in the shower literally watching my life go down the drain as I watched my hair come off my head and the idea just kind of came to me," she said. "I felt like I was called to do it."

The idea to build an app came last year after Breast Cancer Awareness Month in October. Baladad said she "wanted to reach more women" and thought the way to do so was through an app.

Over the following months, she researched how to build an app, the features she wanted it to have, and consulted tech-savvy people who helped her with the process. It officially launched on Apple and Android app stores in September 2021. 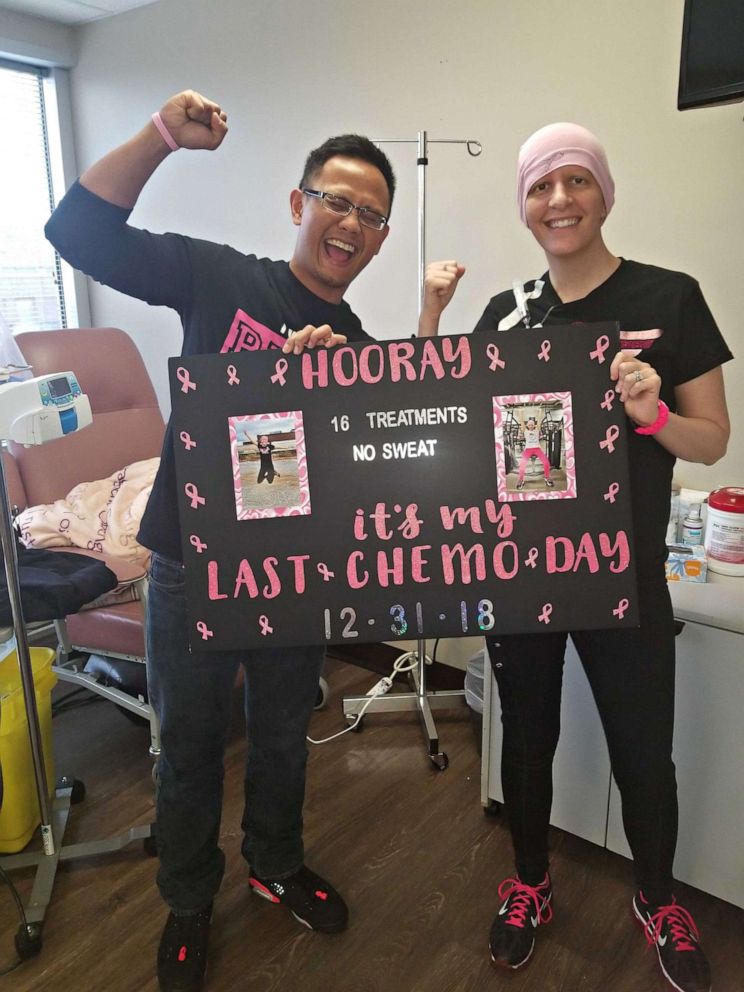 "I just thought about [the app] from a woman's experience, and I wanted it to be really intuitive for how a woman may want to use it," she said. "I'm not a coder or developer, I'm an advocate. I look at the app as an advocacy tool that women can use to communicate with their physicians. I'm not a doctor and I'm not trying to be a doctor — my mission is to help women advocate for their breast health."

The information on the app is sourced from the CDC, the National Breast Cancer Foundation, and Johns Hopkins Medicine. There are instructions on how and when to do a self-exam and information on genetic testing and counseling, types of breast screenings, risk-reducing surgical procedures, breast reconstruction options and more.

Other features of the app include the ability to set reminders for self-exams and a space to track any changes. There's also a section where users can share their advocacy wins with Baladad, plus a community feature where users can talk to others about what they're doing.

"I also have reminders throughout the app that if you find anything, please talk to your doctor," Baladad said. 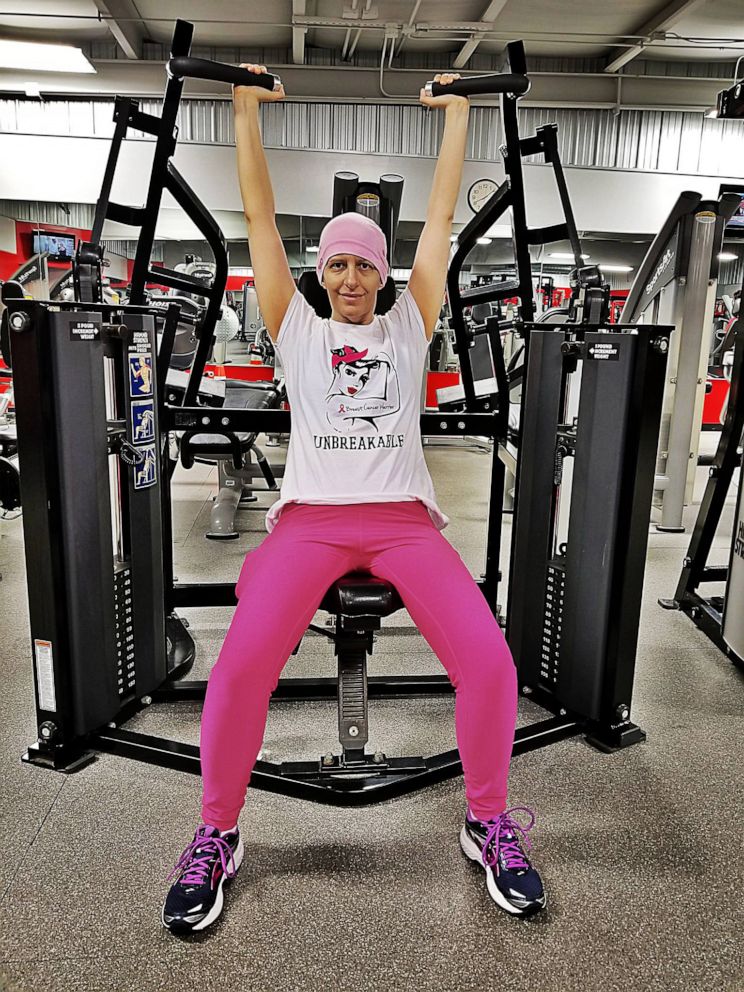 Baladad hopes to one day include a telehealth feature within the app, where users can connect with medical professionals in real time.

"If a woman is doing a self-exam and she finds a lump, she may get scared or have anxiety," she said. "I want to be able to connect her with a physician and they can put her on the right track to help her [with] getting the answers that she needs."