This October marks the 35th anniversary of National Breast Cancer Awareness Month, a time for raising awareness of a disease that touches the lives of so many.

For example, the American Cancer Society estimates there will be 279,100 new cases of breast cancer in 2020, and 42,690 estimated deaths. That's a lot of people -- not to mention their friends and families, too.

One way the public's perception of breast cancer has changed over time is from watching TV, with the disease being portrayed in a variety of ways throughout the decades. By showing women -- and even men -- taking control of their health, audiences have learned more about prevention, detection and treatment as well as helping increase acceptance and understanding of the disease.

MORE: Why recognizing the signs of breast cancer should still be a priority amid COVID-19

From the '70s to today, we've seen a change in the way breast cancer has been depicted on television, with it evolving from a more taboo topic to being a significant storyline for some shows. To check out a brief timeline of these examples, from classic sitcoms such as "All in the Family" to modern-day dramas such as "The Bold Type" and "A Million Little Things," scroll down: 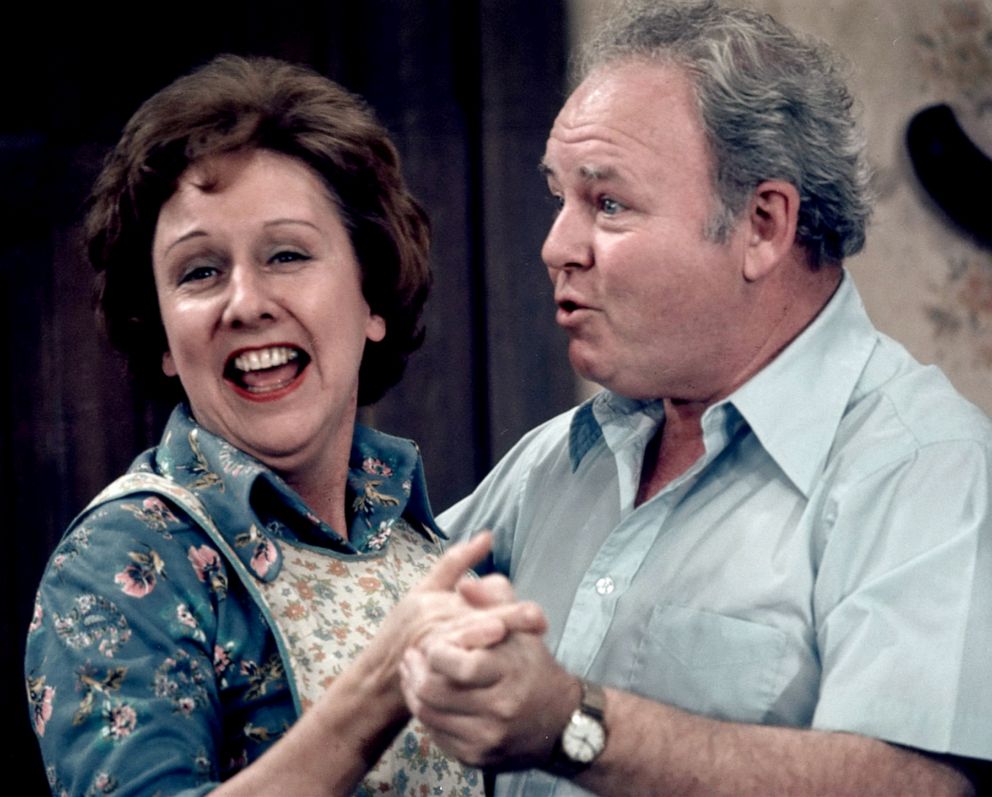 Cbs Photo Archive/CBS via Getty Images
Jean Stapleton, as Edith Bunker, and Carroll O'Connor, as Archie Bunker, in a scene from "All in the Family."

Edith Bunker (Jean Stapleton) on "All in the Family"

When "All My Family" featured a storyline about Edith Bunker (Jean Stapleton) having a breast cancer scare in the 1973 episode "Edith's Christmas Story," it was a revolutionary moment. Even the show's creator, Norman Lear, said it was out of the norm for TV shows to, at that time, talk about such issues. "Before 'All in the Family,' there were a lot of families on television, but the biggest problem they faced was Mom dented the fender or the boss is coming to dinner and the roast is ruined," he told the Harvard Business Review in 2014. "America had no racial problems, no economic problems. Women didn't get breast cancer, men didn't get hypertension."

Though she at first didn't want to reveal to her husband that she discovered a lump in her breast, Edith found comfort and support from her daughter and her best friend. Ultimately, after having the lump removed, she learned it was just a cyst. Not only that, but she found she had her husband's support when he showed up to the hospital once he'd heard of her health scare. Stapleton herself told the Television Academy Foundation she was "concerned" about the choice to address breast cancer on the show, but this early example has laid the groundwork for depictions that have come after it. 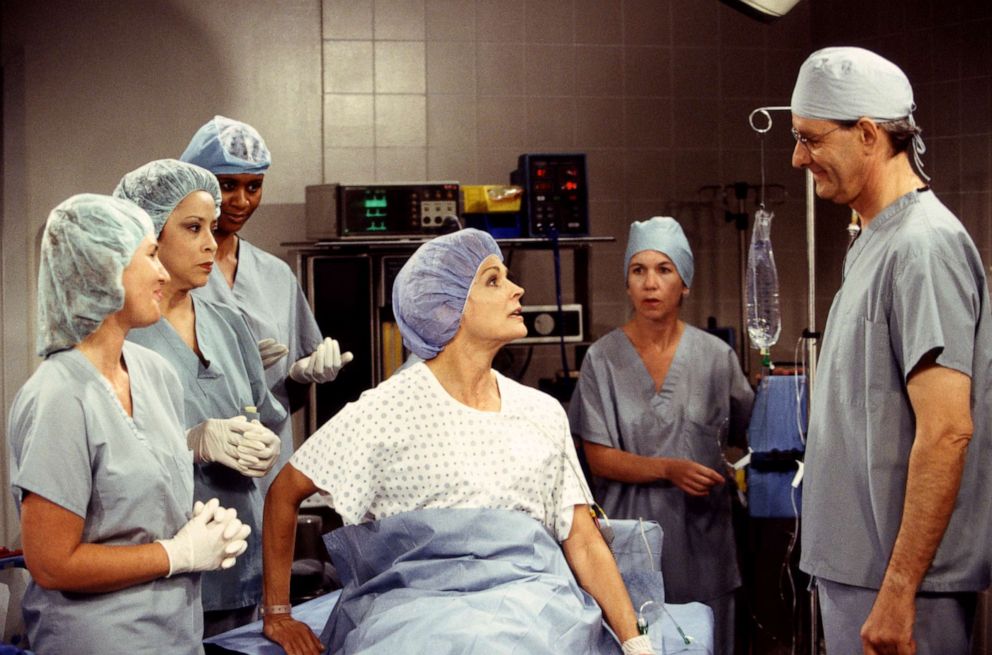 CBS via Getty Images
Candace Bergen, as Murphy Brown, center, in a scene from "Murphy Brown."

The 10th and final season of the original "Murphy Brown" series, which ended in 1998, featured a story arc in which Murphy battles breast cancer. Striking a balance between the show's sitcom DNA and serious issues, star Candice Bergen told "Today" the portrayal was responsible for a 30% uptick in women getting mammograms that year. This came after Murphy and her boss got mammograms after it was revealed they both hadn't had a recent screening. Though her boss' test comes back just fine, Murphy begins a long journey that includes a biopsy, lumpectomy, chemotherapy, radiation and a relapse scare in the season 10 finale. Bergen told the Los Angeles Times this storyline was "Murphy Brown" at its "best -- strong and funny and tough-minded." 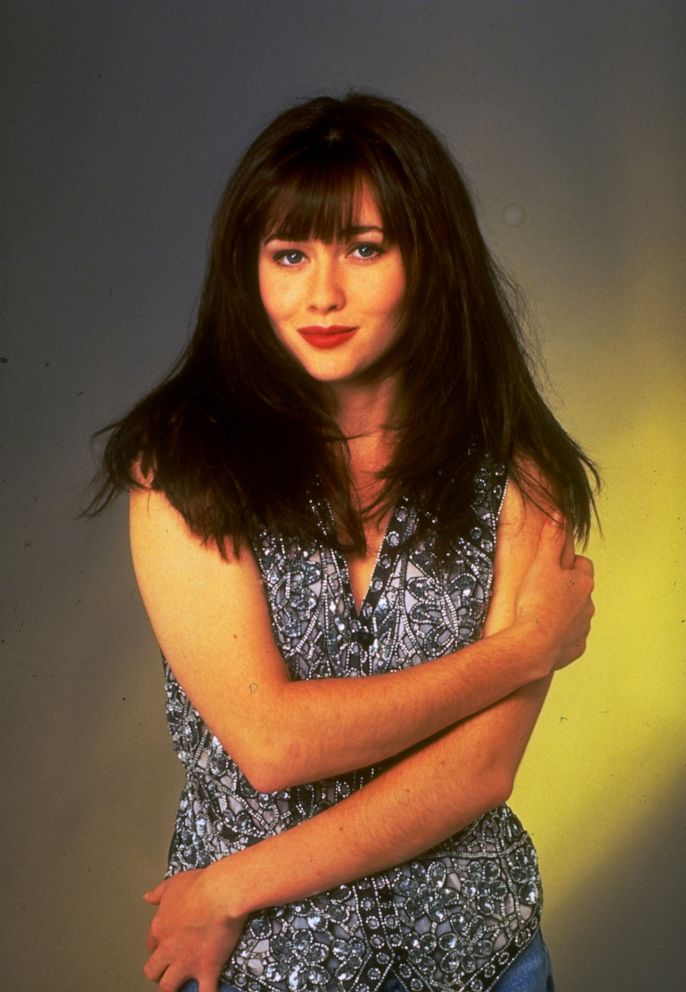 While Brenda Walsh (Shannen Doherty) is preparing to take the SAT in high school, she had to confront the reality of finding a lump in her breast in the 1991 episode "It's Only a Test" on "Beverly Hills, 90210." While one friend says she is too young to have to worry about self-exams, another reminds her it's never too early to be on the lookout for breast cancer -- especially when Brenda reveals her aunt recently died from it. Many applauded the message, as it instills good habits early. The American Cancer Society notes that 1 in 8 women will be diagnosed with breast cancer in their lifetime, but only 1 in every 1,479 women in her 20s will be diagnosed with it.

MORE: Dolly Parton teams up with other artists for song to support fight to end breast cancer

Sadly, Doherty's own experience with breast cancer has been vastly different than Brenda's. The actress was first diagnosed in March 2015, later undergoing a single mastectomy in May 2016 followed by chemotherapy and radiation treatments. In April 2017, she announced her cancer was in remission but, in February 2020, she appeared on "Good Morning America" to announce her cancer had returned and she was in stage 4. Several months later, Doherty gave an uplifting update to Elle, saying: "I'm not ready for pasture. I've got a lot of life in me." 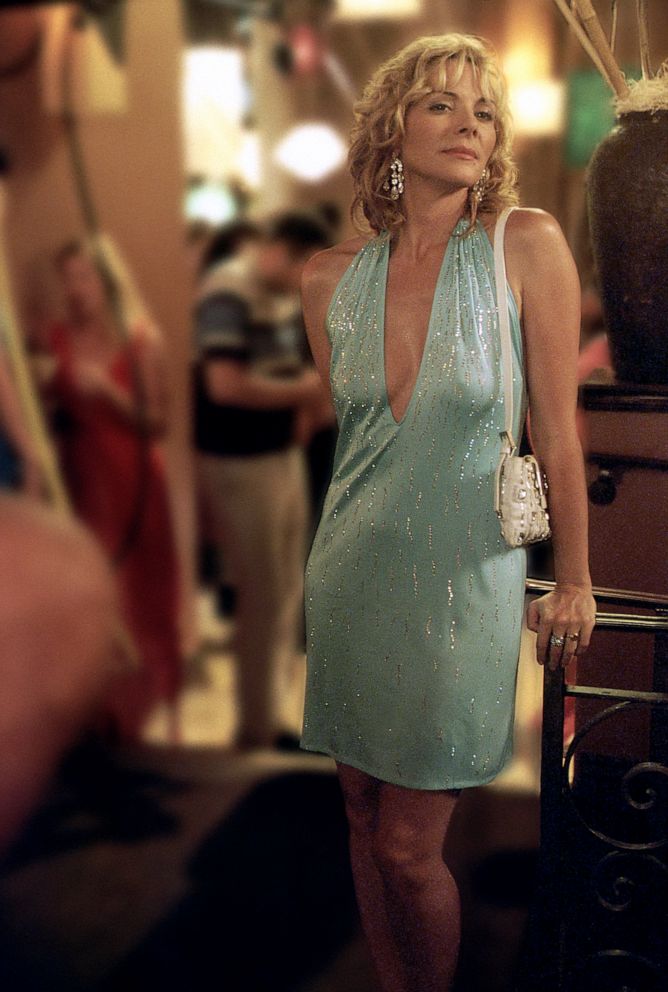 Getty Images, FILE
Kim Cattrall as Samantha in a scene from "Sex in the City."

Samantha Jones (Kim Cattrall) on "Sex and the City"

When it comes to lively women on TV, most pale in comparison to Samantha Jones (Kim Cattrall) on "Sex and the City." In the second half of the series' final season, airing in 2004, Samantha goes to get a breast augmentation consultation only to discover she has a lump, which is later diagnosed as malignant. As Samantha loses her hair due to chemotherapy, the show depicts her choosing to shave her head and embrace the situation fiercely by donning wigs, hats and headscarves to bring out her signature flair. In the penultimate episode, she wins over folks at a cancer benefit by removing her wig because she is suffering hot flashes. The audience members, appreciating her honesty, follow suit.

Cattrall once told Entertainment Weekly she was worried Samantha's cancer storyline was being used as "punishment" or "payback" for a woman who was such a titan, living life the way she wanted and not asking for permission to do so. Thankfully, in her opinion, the creative powers that be didn't let that happen. "[They] wrote a woman going through a horrific episode in her life, dealing with it in uniquely her own way," Cattrall told the magazine, saying it's "the greatest compliment" to have people tell her she helped them get through their own cancer battles. "It means so much to me that people went through something as horrific as cancer and then they could laugh at the same time." 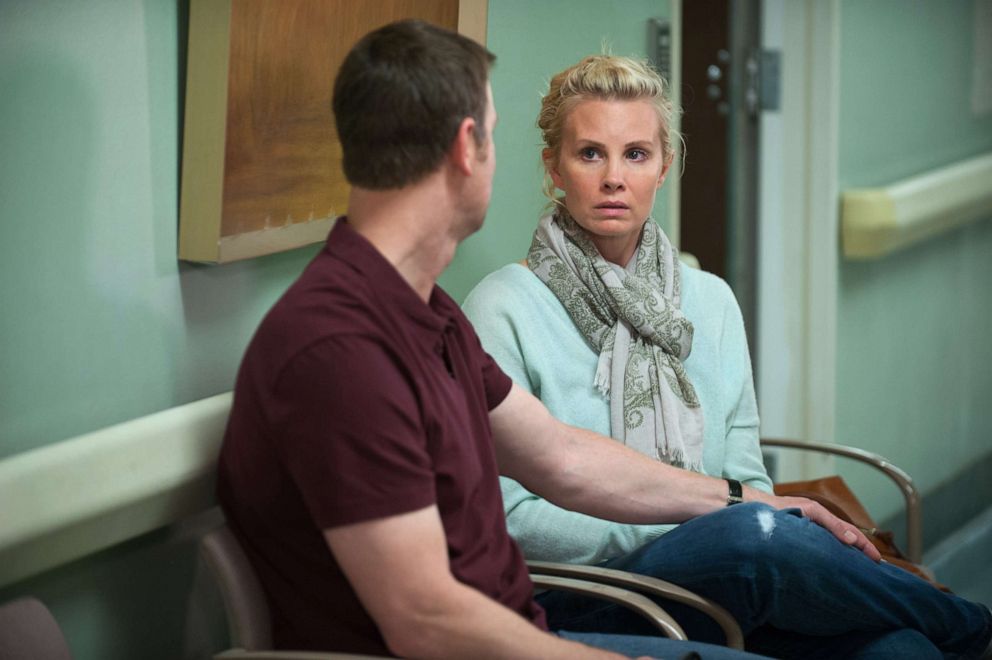 Colleen Hayes/NBCUniversal via Getty Images
Peter Krause, as Adam Braverman, and Monica Potter, as Kristina Braverman, in a scene from "Parenthood."

As for dramatic depictions of breast cancer, look no further than Kristina Braverman (Monica Potter) on "Parenthood." Throughout the show's fourth season, airing from 2012 to 2013, Kristina battles the disease with the loving support of her family. We get to see every moment along the way -- the good and the bad -- while mixing in a little humor so as to not overwhelm fans. Like many other storylines centered around cancer, Kristina finds a kinship in other survivors while experiencing side effects of the debilitating chemotherapy treatments, but it's the closeness of the Braverman family that helps her have the strength to give it all she has.

"Parenthood" showrunner Jason Katims told the New York Post Kristina's storyline was based on the cancer battle his own wife, Kathy, went through. He said it was important to him for the plot to last the full season because he knows how deeply the disease can affect a family. Striking the balance between serious and lighthearted was vital, he said. "I knew we'd be able to find moments of humor and lightness in the story that is such an emotional story and can be a difficult one to tell," he told the publication. 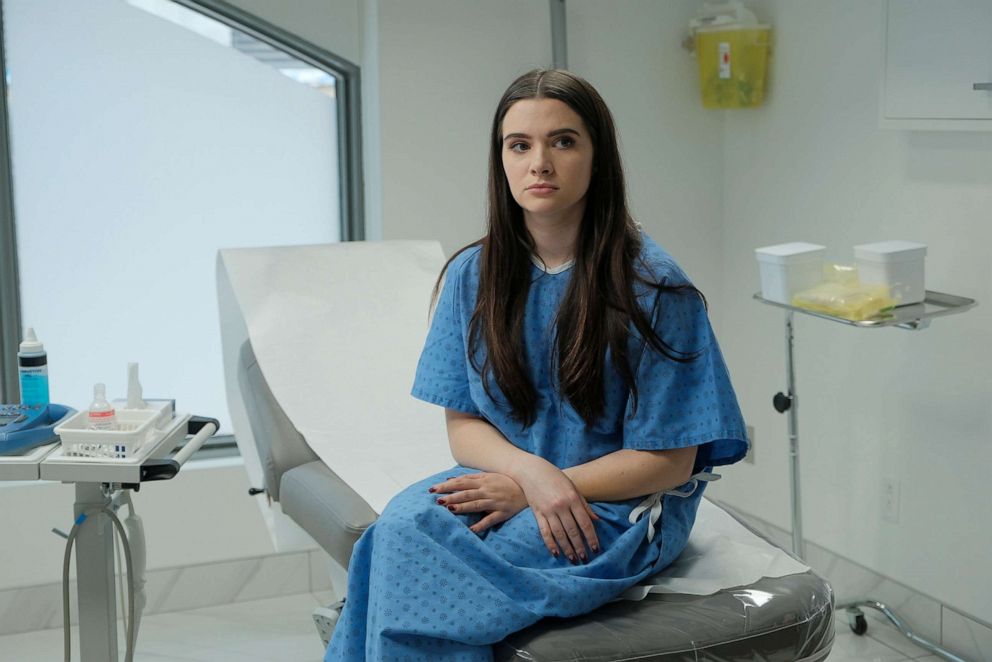 Philippe Bosse/Freeform/NBCU Photo Bank via Getty Images
Katie Stevens, as Jane Sloan, in a scene from "The Bold Type."

Jane Sloan (Katie Stevens) on "The Bold Type" has had a cancer storyline since viewers learned her mother died of breast cancer and she found out she carried a BRCA mutation early on in the first season, which aired in 2017. BRCA is an abbreviation for "BReast CAncer" and there are two different genes, BRCA1 and BRCA2, which normally help prevent the disease by repairing breaks in the DNA which can lead to the growth of tumors and, ultimately, cancer. When there's a mutation in these genes, known as tumor suppressor genes, a person is more likely to develop breast cancer because the genes aren't doing what they're supposed to. According to the National Breast Cancer Foundation, 1 in 400 -- 0.25% -- carry a mutated BRCA1 or BRCA2 gene, and gene mutations are often passed down from parent to offspring. It's estimated that 55% to 65% of women with the BRCA1 gene mutation will develop breast cancer before age 70, while that's true for approximately 45% of women with the BRCA2 gene mutation, with chances of developing breast cancer at a younger age also increasing. Fans have seen Jane take action in her future health, with her deciding to undergo a preventative double mastectomy in season 4, which aired in 2020. After doing this, she struggles to reconnect with her body and get intimate with romantic partners but, thanks to the support system around her, she is able to push through and find herself again.

MORE: How 3 women trusted their instincts and discovered they had cancer

Playing Jane has been a learning lesson for Stevens. In Sept. 2019, the actress opened up on Instagram about her own cancer scare, revealing she found a lump in her breast that, after a trip to the doctor, was deemed a "benign tumor called a fibroadenoma." Stevens said she felt "a responsibility" to share her story because of the character she plays on TV and to normalize this kind of discussion. "It's scary to find out that something might be wrong," the actress wrote, "but the quicker you get the information, the quicker you can do something about it, OR (in my case) the quicker you can have peace of mind! Knowledge is power." 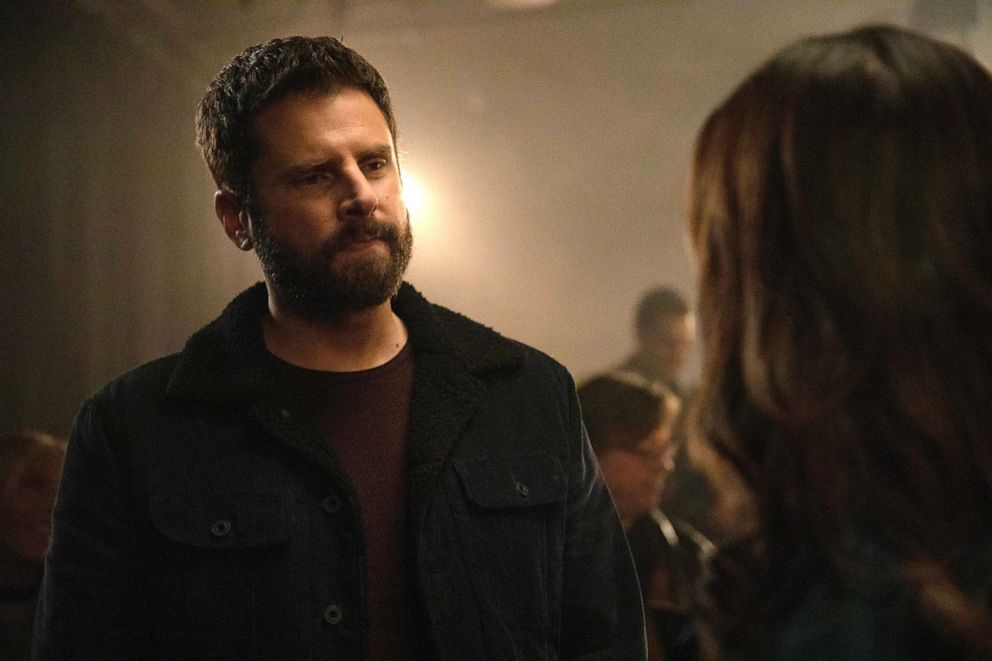 Jack Rowand/ABC via Getty Images
James Roday as Gary in a scene from "A Million Little Things."

A take on the disease very different to others on this list is the instance of male breast cancer that Gary Mendez (James Roday Rodriguez) faces on "A Million Little Things." Even though he is in remission, he is living with the understanding that the disease could return at any time. As the character likes to remind others, "Men get breast cancer, too." According to the American Cancer Society, in 2020 there will be an expected 2,620 men diagnosed, with 520 expected to die. The lifetime risk of male breast cancer is 1 in 833.

MORE: Mathew Knowles reveals he is battling breast cancer: 'We need men to speak out'

Despite the low occurrence rate, Rodriguez told ABC11 he was happy to play Gary, a character going through something not many even know is possible. "I thought it was important to shine a light on a struggle that we haven't seen a lot of," he said, "and to hopefully sort of reach out and to let these men know that they are very much not alone and that we appreciate them and see them, and we know that their struggle is every bit as real even though it can sometimes be stigmatized and somewhat alienating."