Mother’s Day is always a special celebration for Alia McCants, not only because she is the mom of twin 4-year-olds but also because becoming a mom nearly cost McCants’ her life.

McCants, 35, was close to becoming a statistic in what has become an alarming trend in the U.S., woman dying during and after childbirth, often in instances that could have been prevented.

In the case of McCants, she safely delivered her twin children, a girl, Aria, and a boy, Carter, via C-section on Dec. 11, 2014, in a New York City hospital. 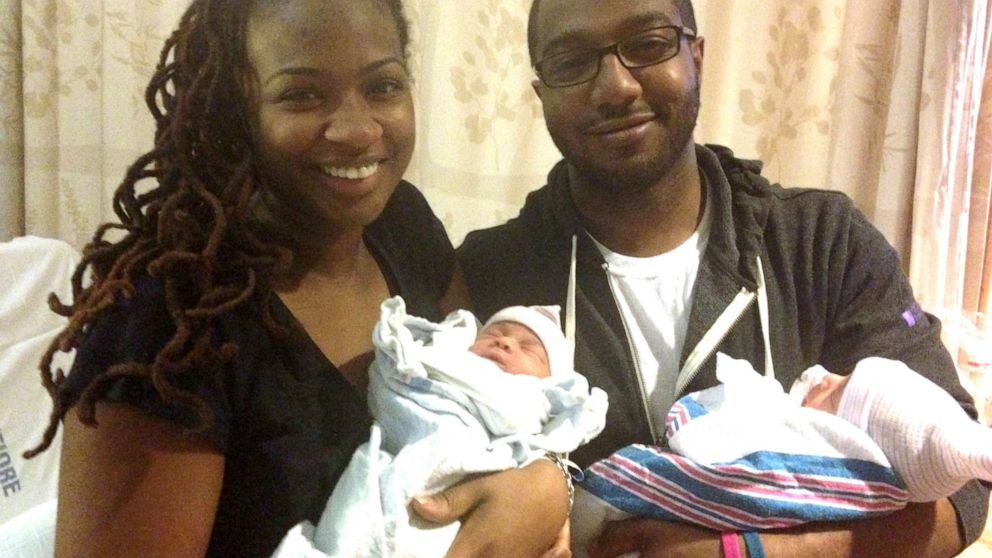 Nine days after the twins’ birth, she was home taking care of her newborns with her husband, Chris, when she began bleeding profusely.

McCants’ husband rushed her to an emergency room where, after she passed out, doctors determined she was hemorrhaging. She ultimately had a dilation and curettage (D&C), a procedure women may have after a miscarriage, to remove tissue from inside the uterus.

In McCants’ case, doctors told her a part of her placenta that should have been removed had been left inside her uterus during her C-section.

“The doctor who delivered our twins was in our doctor’s practice but not someone we had met before,” said McCants, who now lives in White Plains, New York. “I remember having real hesitation around having a C-section.”

“I remember the way I felt and the way I think the doctor treated me was kind of like, ‘You’re not a good mother if you don’t have a C-section,’” she recalled. "I definitely felt dehumanized by it, like I was the vehicle for two people to come into the world but that vehicle didn’t have a personhood attached to it."

“The reason [doctors] had to save my life was because they put it in jeopardy to begin with,” McCants said. 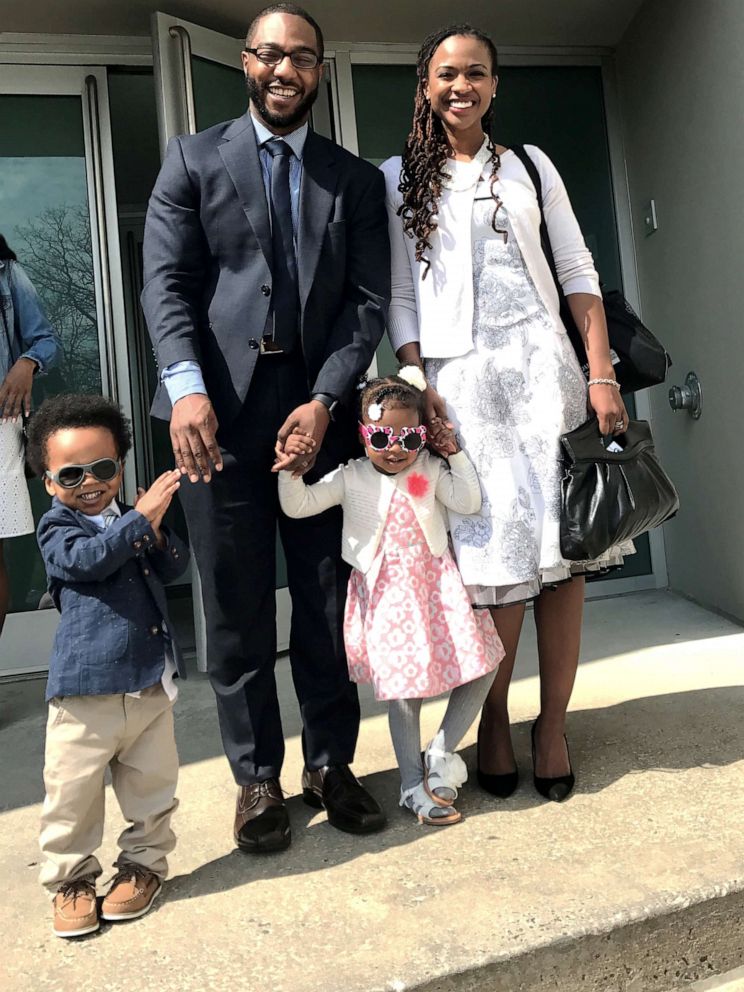 McCants said she was so traumatized by the event that it was only months later that she began to put pieces of her near-death experience together on her own, like remembering a doctor coming in overnight during her original post-delivery hospital stay and removing blood clots.

(MORE: 3 in 5 pregnancy-related deaths in US can be prevented: CDC)

McCants, who is black, also did not realize she had been a lucky survivor of the maternal mortality crisis in the U.S., a crisis that disproportionately impacts black women.

It was not until Serena Williams opened up last year about her own harrowing medical ordeal after delivering her first child that McCants realized she was not alone and that she too was ready to speak out.

In recent weeks, Beyonce has also opened up about the complications she experienced while giving birth to her twins, saying, "I had high blood pressure. I developed toxemia, preeclampsia, and in the womb, one of my babies' heartbeats paused a few times, so I had to get an emergency C-section."

"I saw that there were so many other stories out there that it became hard to avoid them and I started recognizing [maternal mortality] as a term," McCants said. "I saw that it’s not just me."

McCants is now a volunteer advocate with MomsRising, an advocacy organization founded by moms.

Like McCants, MomsRising also saw Serena Wililams sharing her story -- she told Vogue she diagnosed her own pulmonary embolism, among other complications, and informed her doctors -- as a watershed moment, according to Monifa Bandele, senior vice president of MomsRising

"It was finally our ability to say, 'Look, here’s probably the most influential black woman in the country, she’s wealthy, she’s all the things we’re told you have to be to avoid negative outcomes, and it happened,'" Bandele said. "This storytelling that’s coming up from black women is what's pushing this issue into the national discourse."

It was Bandele who helped put the issue of maternal mortality even more in the spotlight when she asked Democratic presidential candidate Sen. Elizabeth Warren about the crisis last month at the "She the People" presidential forum.

Warren unveiled her plan at the forum, passionately proposing that if health systems are able to reduce the disparities found in maternal death rates for women of color and increase survival rates, they will "earn a bonus."

If not, according to her proposal, "money will be taken away from them." Warren went on to detail her plan in an Essence magazine op-ed.

Black moms in our country are dying from childbirth-related causes 3-4 times more often than white moms. Any meaningful solution to our maternal mortality crisis must address structural racism as a root cause of this problem. My new idea would tackle this crisis head on. pic.twitter.com/1YcaVNTedz

Black mothers with advanced professional degrees, such as a master's degree or higher, have a greater chance of infant mortality compared to white women whose highest education level is the eighth grade, according to a 2016 study by the Brookings Institution.

Black mothers are dying at alarming rates from pregnancy-related causes in part because of racial bias in our health care system. Everyone should be outraged this is happening in America.

👇Read about @amprog's new report on what we must do to fight this public health crisis. https://t.co/Wv371LMWlR

A report released Tuesday by the Centers for Disease Control and Prevention (CDC) also found "persistent racial disparities." Black, American Indian and Alaska native women were about three times as likely to die from a pregnancy-related causes as white women, the data found. However, most deaths were preventable, regardless of race or ethnicity.

Pregnancy-related deaths are defined as the death of a woman during pregnancy or within a year of the end of pregnancy from pregnancy complication, a chain of events initiated by pregnancy or the aggravation of an unrelated condition by the physiologic effects of pregnancy, according to the CDC.

Advocates say they are hopeful to change those statistics with women leading the way, at both the federal and local levels. In Congress, where a record number of women were elected in 2018, two female lawmakers created the first-ever Black Maternal Health Caucus last month to address the epidemic of black women dying in pregnancy-related deaths.

Freshman Rep. Lauren Underwood, D-Ill., and Rep. Alma Adams, D-N.C., launched the caucus with the support of the Black Mamas Matter Alliance (BMMA) that was formed by moms in 2015.

"Our slogan is to listen to black women, trust black women and invest in black women and if you do all of these things, we definitely believe that the issue can be solved," said the alliance's co-director, Angela Doyinsola Aina. "I think what has really propelled women is that numbers [statistics] don’t lie."

5 solutions for women by women

The three women "GMA" spoke with all said they want women to be aware of the issue of maternal mortality, but not afraid to have children. They also want women to know the onus is not on them, but on the health care system to change.

Here are their five things they want women, and officials, to know.

Women should not be burdened by the alarming statistics around maternal mortality, both Bandele and Aina say, but they should be aware of them in order to prepare themselves for the best possible outcome.

McCants, the mom of twins, for example, said she found out after her delivery that the hospital where she gave birth had high rates of both C-sections and maternal mortality.

"I wish I had known that before and I would do more research next time on the hospital so I can make an informed decision," she said. "We need to see what the trends are, things like who the high-performing doctors are, how many patients are suffering hemorrhages."

McCants, who underwent a C-section despite hoping for a vaginal birth, said she knows now that, “I needed someone to be as forceful for me [in the delivery room] as the doctor was being.”

"The doctor is the expert but they are also a human and flawed and with bias," she said, noting that she wishes she had prepared herself and her husband better for the need to self-advocate.

Part of the work of advocacy groups like MomsRising and Black Mamas Matter Alliance is to prepare women to advocate for themselves throughout their pregnancies and deliveries, and to provide doula support for women where possible.

McCants also wishes the staff at the hospital where she gave birth, and all medical professionals, had undergone the same amount of racial bias training she has had to as an educator.

"I think it’s easier to dehumanize a black woman than a woman who shares the same identity as my doctor, who was a white woman," she said. "Would they have listened to me more or treated more carefully if I wasn't a black person? I’m sure it’s never just one thing but those are the things I think of."

Groups like MomsRising and Black Mamas Matter Alliance were founded by women for a reason. They want women, who are the ones impacted by maternal mortality, to be the ones guiding the strategy on how best to help women.

"We need to value the work that is being led by black women, both at the national and local levels, and to invest in this work because we’re going to do this work in a culturally congruent and comprehensive way that is going to be actually receptive to our communities," said Aina, of Black Mamas Matter Alliance.

"We see this train moving and have to make sure we’re in the driver’s seat because that’s the way we’re going to get solutions," added Bandele of MomsRising. "It's not just representation but it’s having that firsthand knowledge of what the experience is."

5. Invest in women's health from birth on:

The CDC report released this week determined that each pregnancy-related death was associated with several contributing factors, including lack of access to appropriate and high-quality care, missed or delayed diagnoses and lack of knowledge among patients and providers around warning signs. The majority of the deaths, no matter when they occurred, could have been prevented by addressing the factors at multiple levels.

"We always tell women that you’re not alone and anything that is going wrong or not according to plan is not because there are personal failings, but that we have widespread problems in our health care system," said Bandele.

"If we did more around really promoting women’s health and investing in it form the time they are girls to old age, we will definitely help solve the maternal mortality issue," she said.