A Texas mom of three was reunited with her kids at home for the first in more than a year after battling a near-death experience with COVID-19.

Jazmin Kirkland, 34, of Bells, Texas, said her 2-year-old son didn't recognize her at first when she walked in the door of her family's home on Aug. 9, because he had no memory of ever seeing his mom outside of a hospital.

"He was 1 when I went into the hospital and he sees the hospital as, that's mom's house," Kirkland told "Good Morning America." "He was confused. He didn't recognize me because I wasn't in my PJs or my hospital gown."

Kirkland's three children, ages 2, 7 and 10, had been used to seeing her only on FaceTime or during hospital visits since early August 2021, when she was hospitalized with COVID-19.

The family was on vacation in South Carolina, staying in a home with family members, when Kirkland, her husband and their two youngest children tested positive for the virus.

While her husband and children had few to no symptoms, Kirkland said she began to have such difficulty breathing that she went to the emergency room. 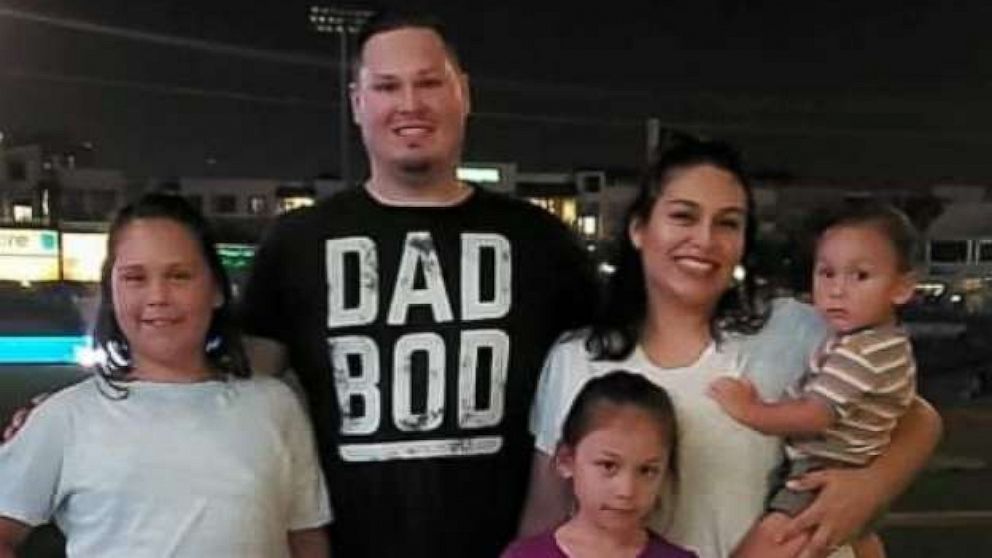 Kirkland, who described herself as healthy and with no preexisting conditions, said she didn't even say goodbye to her kids before leaving, thinking she would receive an oxygen treatment and return home quickly. Instead, she was admitted to the hospital and her condition quickly deteriorated.

Within days, Kirkland said she was put in the intensive care unit and put on a ventilator to help her breathe.

"I started to pray and was like, 'God, please don't let me die … just let me wake up. Let me be here for my kids and my husband,'" she said. "And I just texted my husband and I said, 'I love you. I promise I'm going to keep fighting.'"

For more than a year, Kirkland fought for her life in multiple hospitals and acute care facilities near her home.

She spent most of her time at Texoma Medical Center in Denison, Texas, where doctors put her on an extracorporeal membrane oxygenation, or ECMO, machine, which removes carbon dioxide from the blood and sends back blood with oxygen to the body, allowing the heart and lungs time to rest and heal. 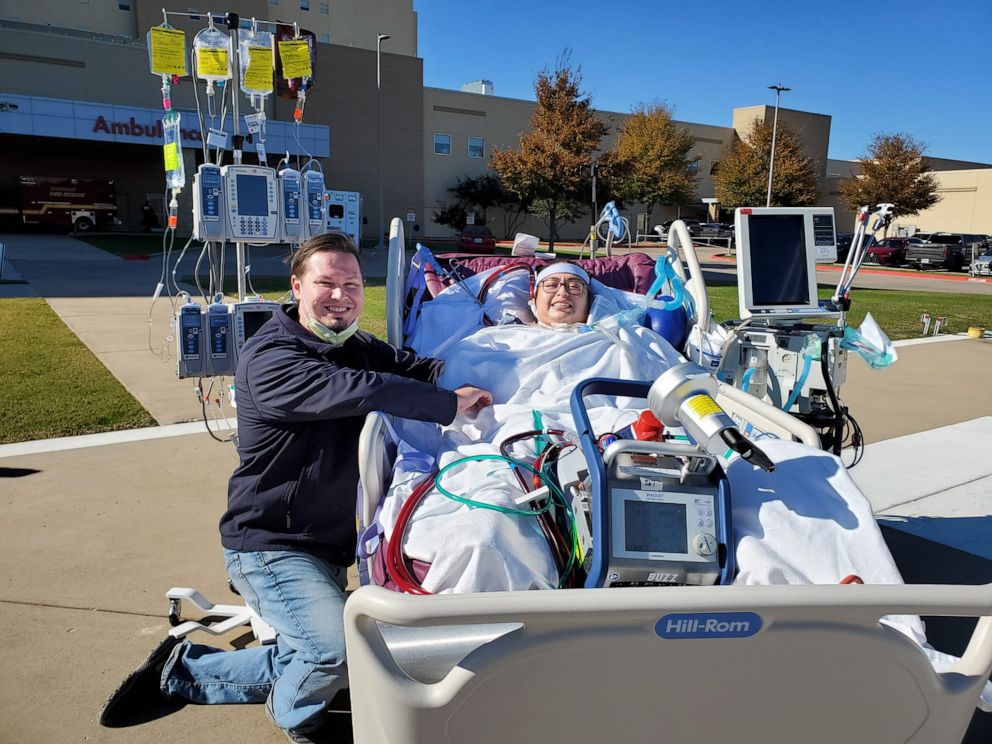 Kody Kirkland
Jazmin Kirkland, of Texas, poses with her husband Kody while hospitalized during her battle with COVID-19.

While most patients are typically on an ECMO machine for two to four weeks, Kirkland stayed on the machine for 188 days, according to Brandon Davis, the cardiovascular intensive care unit manager at Texoma Medical Center.

"It's hard on the body because a lot of times when you're looking at patients going on ECMO, they're the sickest of the sick," Davis told ABC News. "A lot of times, they have to be fully sedated for an extended period of time which, in that time, you get muscle degeneration, so you're having to work to build their muscles, not only the injured organs."

Kirkland's case was so severe that she was in a medically-induced coma until around November, when she said she remembers learning she would need a lung transplant to survive.

MORE: CDC updates COVID-19 guidelines: What it means for kids and school

Then she faced another setback, learning she would not qualify for a transplant because doctors thought her antibodies would reject it.

"I was told for so long that the only way I could live a full life was to get a lung transplant, so whenever I was declined and they told me I wasn't getting a lung transplant, I think that was the hardest hit," said Kirkland. "I didn't know what that meant, like am I going to stay in the hospital? Am I not going to get to be with my kids, to see them and go play and run with them?"

Though Kirkland remained on the ECMO machine, her lungs eventually began to improve.

"I think it was probably 100-plus days on the ECMO when she started waking up and doing a lot better and each day slowly got better," said Dr. Utkal Patel, medical director of the critical care center at Texoma Medical Center. "As expected, there were good days and bad days and ups and downs, but as a general trend she started moving in a positive direction after a very, very long time."

In March, eight months after she was first hospitalized, Kirkland was taken off the ECMO machine.

Several months later, in July, she was taken off the ventilator and was able to breathe on her own for the first time in nearly one year. Then came the hard work of rebuilding her strength and relearning the basics, like walking and eating. 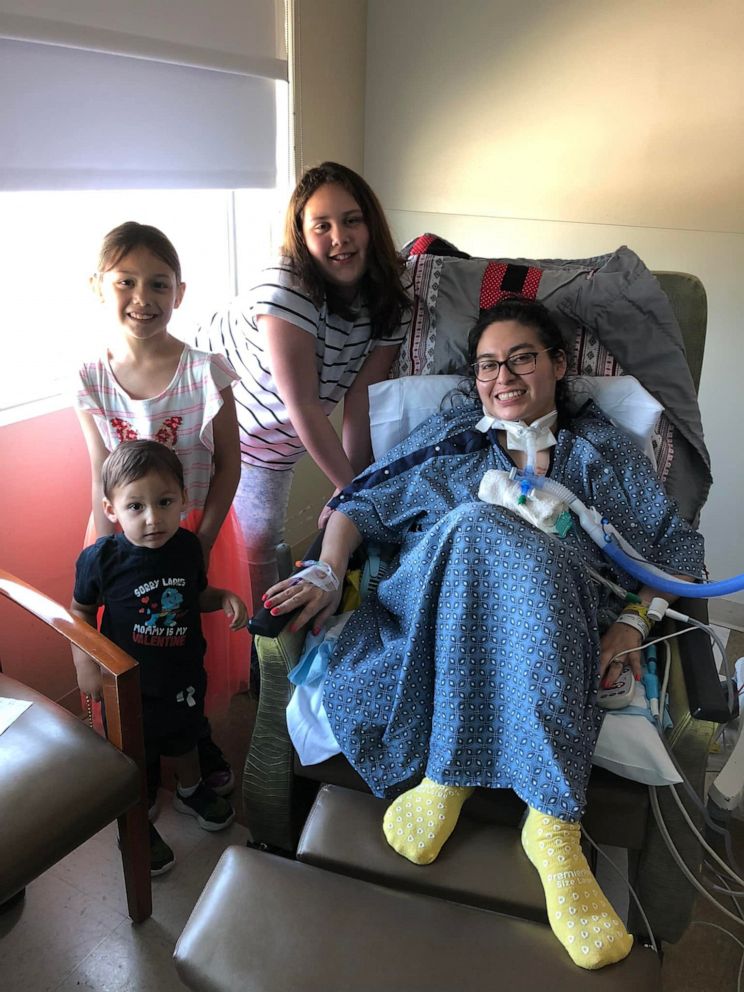 Kody Kirkland
Jazmin Kirkland, of Texas, poses with her three children while hospitalized during her battle with COVID-19.

"For the body to have to even relearn how to walk, that's a huge undertaking, or even taking that first sip of your water with your own hands -- sometimes it takes a huge effort and sometimes it's weeks and months to even get a patient there," said Davis. "So for someone to come as far as she did, it's really amazing."

By her side, through everything, was her husband Kody Kirkland, who juggled, with the help of family members, caring for his three children while being with Jazmin. He said he noticed early on that the hospital was strained due to COVID patients, and he would have to advocate for his wife.

"There was just so many patients and there were so few nurses that it was almost like, you've got to learn it," he said. "I still say to this day that the nurses and therapists are not paid enough because it was so intense. I just wanted to kind of be an extension of what they did just to try and help her get through." 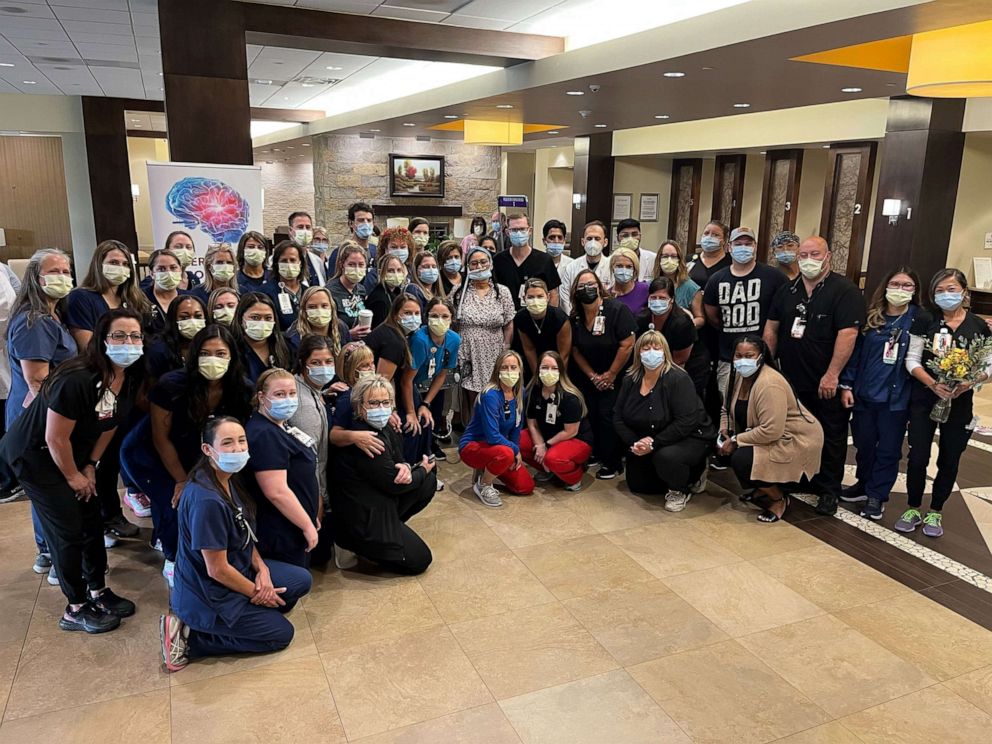 Jazmin Kirkland, who said she was supported by a community of family, friends, neighbors and her kids' teachers, said she credits her husband in particular with saving her life.

"Even our doctors joke about it because of how he was and how much he pushed to get me everything I needed to stay here," she said. "We all say if it wasn't for that, I wouldn't be here."

She said one nurse told her that at one point she brought a do not resuscitate (DNR) order for Kody Kirkland to sign, but he refused.

"She told me the story about it and she said, 'Your family has taught us a lot about not giving up and love and family because your family fought so hard for you and never, never gave up. Never accepted that you were going to die,'" Jazmin Kirkland recalled. "I said, 'That's how we are.'" 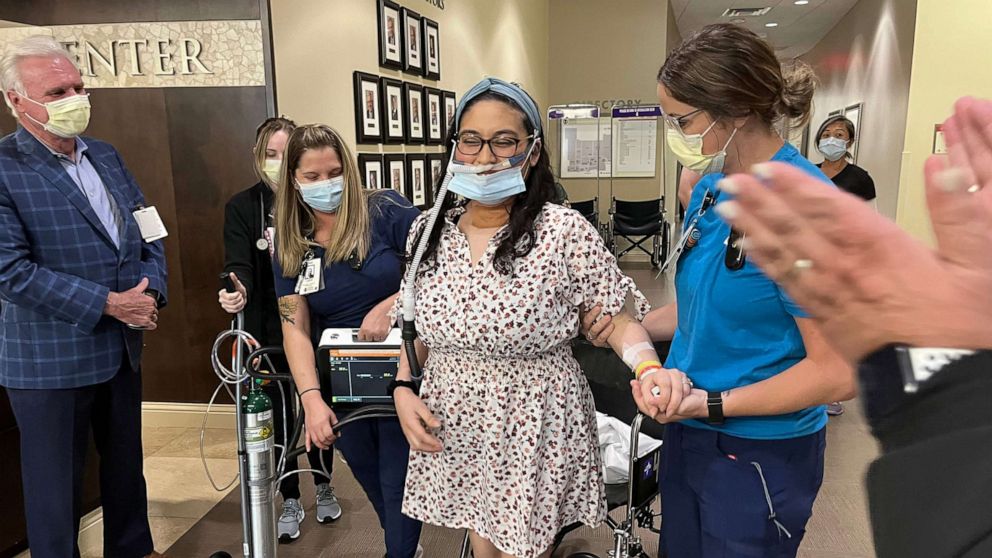 Now at home, Jazmin Kirkland is still on oxygen and still receiving nursing and physical therapy care, but is expected to make a full recovery.

"Saying thank you doesn't feel like it's enough because so many people helped and did so much for us," she said. "That's really important for me, to thank everyone, everyone who was here for us and showed us how much they loved us, who went out of their way to help."