November is National Diabetes Month. Around 1.6 million people in the United States have type 1 diabetes, including 200,000 young people under the age of 20, according to the Juvenile Diabetes Research Foundation (JDRF).

A California mom is sharing a warning for other parents after her 16-month-old son's wet diapers ended in a diagnosis of Type 1 diabetes, a chronic disease.

Courtney Moore, of Sacramento, said she began to notice in early July that her son, Maddox, was waking up with soaking wet diapers each morning.

She also noticed the toddler was waking up each morning extremely thirsty.

"When he woke up he would be so ferociously thirsty and reaching for my water bottle and chugging it," Moore told "Good Morning America." "I knew that wasn't normal."

Moore said she reached out to fellow moms on Facebook for ideas and searched the internet on her own, but did not believe Maddox's symptoms were signs of Type 1 diabetes, an autoimmune disease in which the pancreas makes little to no insulin, according to the Centers for Disease Control and Prevention.

"When you do a Google search, what pops up is Type 1 diabetes, but we don't have a family history of that," she said. "Since we had no knowledge of Type 1 diabetes, I could justify all the different signs we were seeing."

Moore said that, for example, she and her husband, Jason, attributed Maddox's thirst to the hot weather of summer and the slight weight loss they noticed to the fact that he was an active toddler who was now walking. 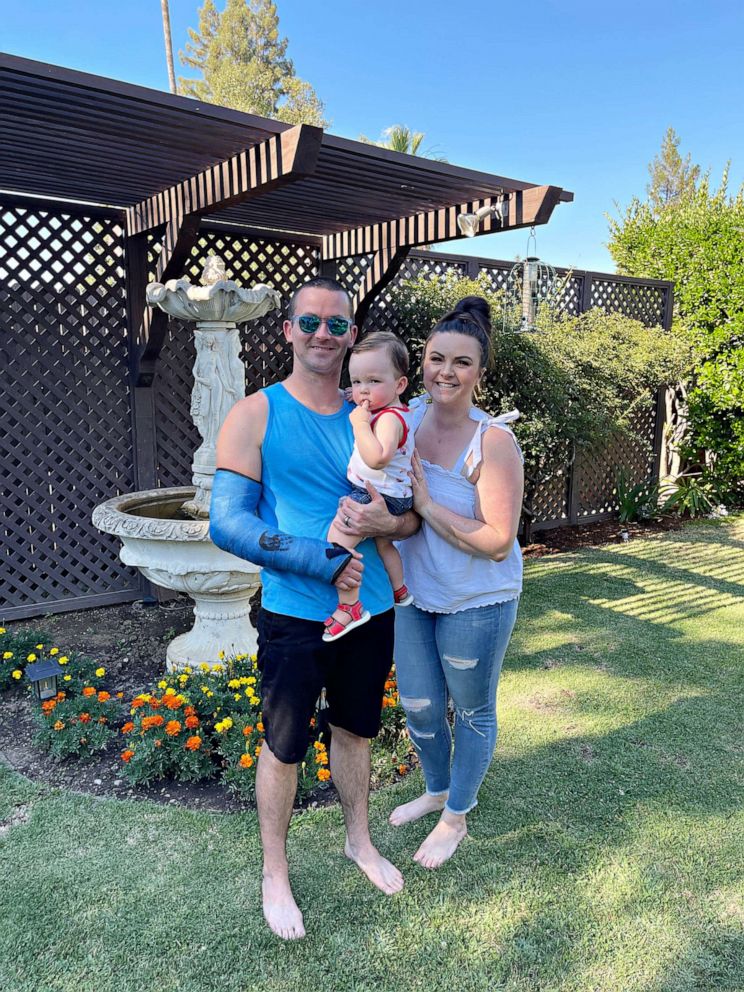 Courtesy Courtney Moore
Courtney and Jason Moore pose with their son Maddox on July 4, 2021, two days before he was hospitalized for Type 1 diabetes.

After noticing that Maddox seemed more and more "off," according to Moore, they took him to the doctor for bloodwork.

One hour later, Moore said she received multiple calls from the doctor's office telling her to take Maddox to the emergency room because his blood glucose, or blood sugar, level was nearly 700. A normal blood glucose reading for a toddler Maddox's age is 100 to 180.

"They said I needed to take him to the emergency room right away and my world just stopped," said Moore. "I can't imagine had we waited any longer."

Maddox was diagnosed with Type 1 diabetes and was immediately treated for diabetic ketoacidosis, a potentially life-threatening complication of diabetes that happens when the body doesn't have enough insulin to allow blood sugar to be used as energy, according to the CDC.

He spent two nights in the hospital and then was sent home, where Moore and her husband are now overseeing Maddox's regimen of insulin shots and blood glucose monitoring. 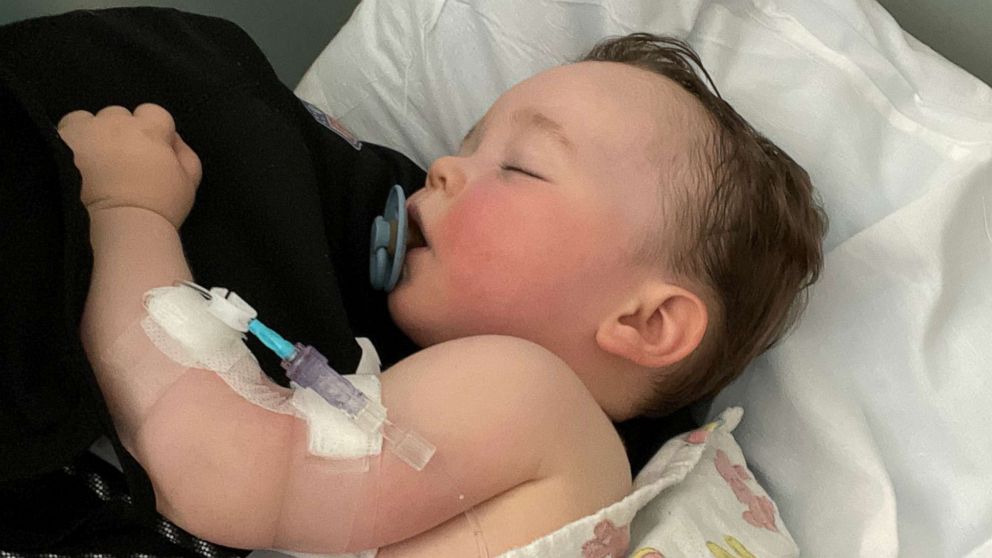 Courtesy Courtney Moore
Courtney Moore holds her son, Maddox, while he was hospitalized after being diagnosed with Type 1 diabetes.

"I'm very blessed that he's as young as he is in a sense because he doesn't understand and he's so resilient," said Moore. "Yes, our lives got turned upside down but he's happy and he's doing really well."

Moore took to Facebook to share what happened to Maddox in hopes of warning other parents to not ignore symptoms their children may be experiencing, like thirst.

"I'm sharing this because what we could've written off as being due to warmer weather and being an active toddler literally could've killed our son," she wrote. "Moral of the story, parents, pay attention to your kids and trust your gut. We got very lucky."

Describing why she spoke out about her family's experience, Moore told "GMA," "My point is not to scare people but just [remind them] to be very aware and keep tracking those things."

What parents should know

Moore's Facebook post highlighted how symptoms of Type 1 diabetes can be mistaken for other conditions or overlooked, especially in young children.

"It's really hard at [Maddox's] age when he can't talk," said Moore. "I fear for the parents who may not be adding things up and having something detrimental happen to their child."

In addition to excessive thirst, frequent urination and unexplained weight loss, symptoms of Type 1 diabetes can include dry mouth, fatigue and weakness, increased appetite and slow-healing cuts, according to the Juvenile Diabetes Research Foundation, a nonprofit organization focused on research and advocacy for Type 1 diabetes.

Type 1 diabetes, previously called insulin-dependent or juvenile diabetes, is a chronic disease for which there is currently no cure.

It is usually diagnosed in children, teens and young adults, but can develop at any age. Approximately 1.6 million Americans are living with Type 1 diabetes, including about 200,000 people under the age of 20, according to JDRF.

The disease is thought to be caused by an autoimmune reaction that destroys the insulin-making cells in the pancreas, according to the CDC. As a result, people with Type 1 diabetes must remain dependent on insulin, delivered via shots or an insulin pump, to stay alive. 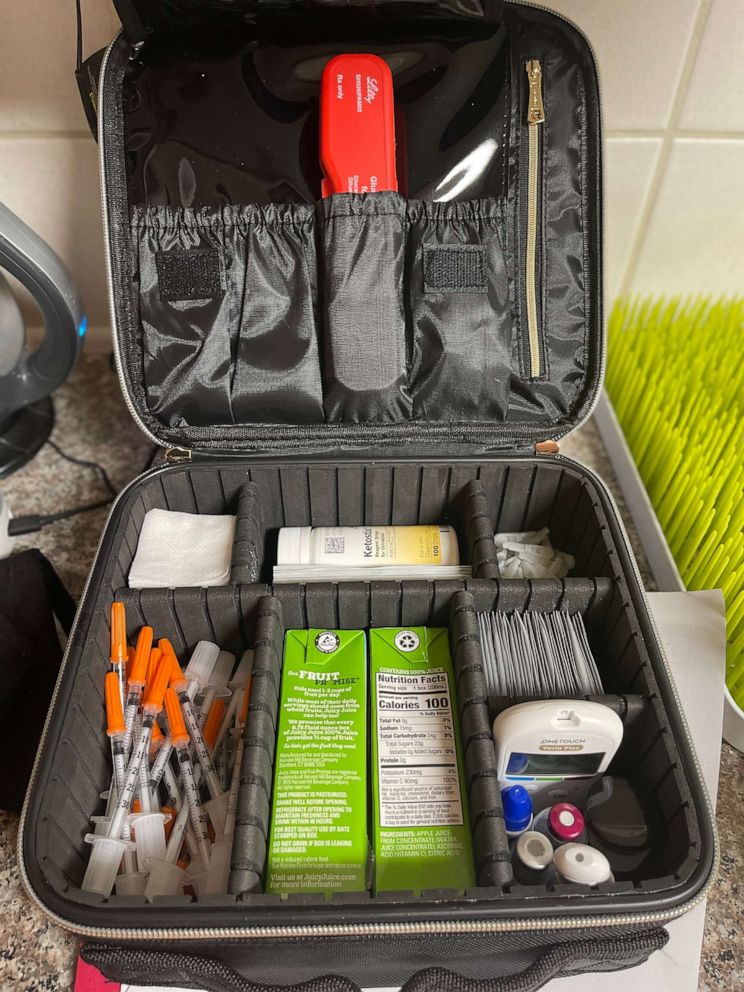 In addition to taking insulin, people with Type 1 diabetes, like Maddox, must measure their blood glucose levels multiple times a day, by either finger pricks or wearing a continuous glucose monitor.

Unlike Type 2 diabetes, which is brought on by lifestyle factors, there is no known way to prevent Type 1 diabetes, according to the CDC. Family history of type 1 diabetes or any other autoimmune disease is commonly seen

Common complications of Type 1 diabetes include hypoglycemia, or low blood sugar, and diabetic ketoacidosis. Long-term complications from the disease can include increased risk of nerve damage, kidney disease, cardiovascular disease and stroke.

Editor's note: This story was originally published on July 16, 2021.