When tennis star Naomi Osaka dropped out of the French Open this week after being penalized for not doing post-match press conferences to preserve her mental health, one of the world's most talented and richest athletes suddenly became a lot more relatable.

Osaka, 23, the No. 2 women's player in the world, proved herself to be not too different from the millions of people who struggle every day with balancing their job with their mental health, and who in some cases have to leave their job or careers because of it.

"I think now the best thing for the tournament, the other players and my well-being is that I withdraw so that everyone can get back to focusing on the tennis going on in Paris," Osaka wrote on Twitter, explaining that she has "suffered long bouts of depression" since 2018. "I never wanted to be a distraction and I accept that my timing was not ideal and my message could have been clearer. More importantly I would never trivialize mental health or use the term lightly."

Kelly Greenwood, of San Francisco, says she related to Osaka's struggled as she watched it unfold from thousands of miles away.

"I have generalized anxiety disorder (GAD) which twice in my life has led to debilitating depression, including having to take a leave of absence from work," Greenwood told "Good Morning America." "As a high performer who had always been in competitive schools and workplaces, I was terrified of professional repercussions because I had worked so hard to create this career."

"I kept it really close to the vest because of self-stigma and shame," she said.

Based on her experience in the workplace, Greenwood went on to found Mind Share Partners, a nonprofit organization with a mission of changing the culture of workplace mental health so that both employees and employers can thrive.

She said that recognizing mental health as a workplace issue is a rapidly growing trend, with change being brought on largely by young people like Osaka. 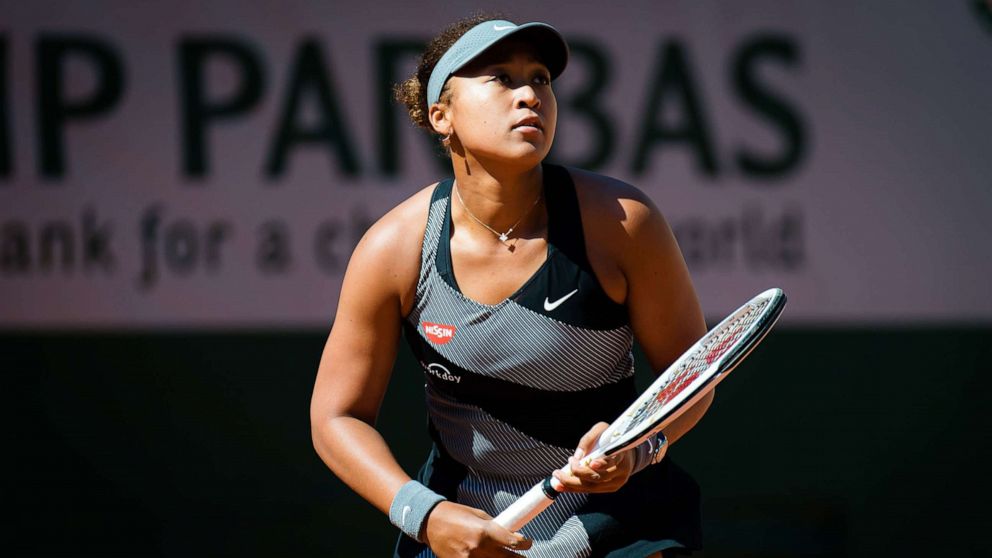 Rob Prange/Shutterstock
Naomi Osaka of Japan in action during the first round of the 2021 Roland Garros Grand Slam Tournament in Paris, May 30, 2021.

A 2019 survey conducted by Mind Share Partners found that 50% of millennials and 75% of Gen Z’ers had left roles for mental health reasons, both voluntarily and involuntarily, compared to 34% of overall respondents, according to Greenwood.

"With the younger generations there’s both a higher awareness of mental health challenges and a higher expectation of workplace’s role in that and what a mentally healthy culture looks like," she said. "As we saw with Naomi Osaka, people are going to walk away if that’s not supported and companies are going to lose some of their talent, and that’s increasingly pushing change in a really positive way and faster than it would have happened otherwise."

The pace of change when it comes to supporting and recognizing mental health in the workplace has also been quickened by the coronavirus pandemic, during which people have reported higher rates of anxiety and depression, and people's personal lives have blurred with their work lives in ways not seen before.

Both the pandemic and the example of Osaka choosing to walk away from a Grand Slam at the height of her career show that the barriers to supporting people's mental health are systemic, not individual, according to Vaile Wright, Ph.D., a clinical psychologist and American Psychological Association’s senior director of health care innovation.

The pandemic has proven that we can work effectively and safely in a more flexible, more psychologically supportive way

Wright noted that the pandemic has "almost entirely disrupted" the long held systems of the workplace, from people now working remotely and more flexibly to demanding their mental health to be accounted for.

And now as the world begins to open up again post-pandemic, mental health is top of mind again for many people as they think about how they want to work moving forward, taking with them lessons from the pandemic.

"I think people have really been given permission to share what’s going on a little bit more because everyone is dealing with something," said Greenwood. "You add the racial reckoning on top of that, the political divide, and so many other challenges we’ve been facing, and workplace mental health really is an imperative at this point. It’s really not optional."

In the case of Osaka, she appeared to collide against the old systems of professional tennis, specifically players' mandatory appearances at post-match press interviews, win or lose.

Osaka posted a statement on social media on May 27 that she would not be doing press during the French Open due to mental health, writing, "I've often felt that people have no regard for athletes' mental health and this rings true whenever I see a press conference or partake in one."

When Osaka skipped her press interview following her first-round win on May 30, she was fined $15,000 by the French Open. 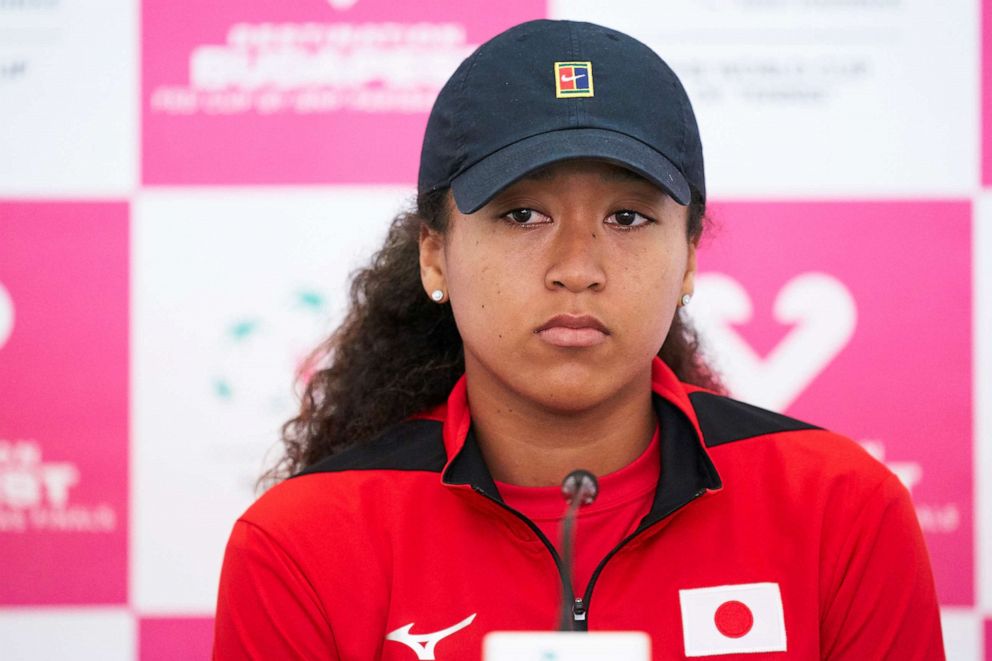 Quality Sport Images/Getty Images
Naomi Osaka of Japan attends the press conference after her match against Sara Sorribes of Spain during the 2020 Fed Cup Qualifier between Spain and Japan at Centro de Tenis La Manga Club, Feb. 7, 2020, in Cartagena, Spain.

Greenwood said a key to the work her nonprofit does with companies is teaching them how to address mental health in the workplace before a crisis arrives, as it did for professional tennis with Osaka.

"It sounds like her work circumstances really led to a breaking point because there wasn’t a workaround or a conversation around what could change," she said of Osaka. "We see that a lot in the workplace, that people need to feel a sense of control at work and there needs to be flexibility for folks to be their best."

Mental health experts have applauded Osaka for speaking up about her mental health, particularly as a woman and a woman of color. Osaka, who is of Black and Asian descent, also garnered praise last year when she wore face masks at the U.S. Open bearing the names of Black Americans killed in encounters with police or due to racial injustice.

"It does open up a conversation because it's her using her voice and her platform to really call out systemic change, which she has done before," Wright said of Osaka's French Open exit. "I think she can show other girls and women who look like her how to empower them to stand up for themselves in ways that I think we haven’t always been able to see."

In the United States, women are almost twice as likely to have had depression as men, according to the Centers for Disease Control and Prevention (CDC). Data also shows that Black adults, and Black women in particular, are more likely than their white counterparts to experience mental health issues, but less likely to seek professional help.

Asian Americans are also substantially less likely to seek mental health services than their white counterparts, according to federal data.

"This year in particular with the racial reckoning and the systemic racism against Black Americans and also the recent anti-AAPI attacks, those are very real traumas that Black and AAPI people are dealing with that don’t go away during the workday," said Greenwood. "I think these communities are obviously facing additional challenges but it’s also much harder to raise your hand at work if you’re already in an underrepresented group. That holds true even for the superstar Naomi Osakas of the world."

For that reason, Greenwood and other mental health experts recommend companies use inclusive flexibility, which is having adaptations that would apply to anyone within the company instead of an accommodation that employees have to raise their hand and disclose a mental health challenge or another disability to take advantage.

"We unfortunately don’t encourage employees to sort of widely disclose their mental health challenges unless they know that there’s a culture of trust at the organization because unfortunately while we are at an inflection point, there are a lot of people still getting up to speed in terms of how to navigate this," said Greenwood. "It’s very real that front-line workers, for example, face a lot of different challenges that people don’t who work in corporate offices and may often need that paycheck even more and be afraid to say something."

For people who don't work in a supportive mental health environment, Greenwood suggests talking with someone in human resources who is better equipped to navigate mental health issues and find solutions.

People should also feel empowered to set up their own boundaries to protect their mental health where they can, like taking all the vacation time they are offered and disconnecting from work once they leave the office or log off, according to Greenwood.

MORE: On Mental Health Action Day, here are 5 tips to cope with 'reentry anxiety' amid COVID-19

Both Greenwood and Wright agreed that while employees can call for change, the onus is on employers to "talk the talk and walk the walk" when it comes to supporting employees' mental health.

"I do think that employees need to continue to approach their employers, their managers and have these transparent conversations about what they need moving forward to support their mental health," said Wright. "Then employers need to reevaluate how they’ve operated in the workplace, and that can include training leaders to be more empathic and supportive and aware of mental health issues."