The Washington metropolitan region is home to a number of basketball greats, including NBA star Kevin Durant and the late NCAA legend Len Bias.

Among them is Delonte West, a former college basketball third team All-American who was the 24th overall pick by the Boston Celtics in the 2004 NBA draft.

West played eight seasons in the NBA alongside names like Paul Pierce and Dirk Nowitzki with his final stint at the point guard position for the Dallas Mavericks in 2012. 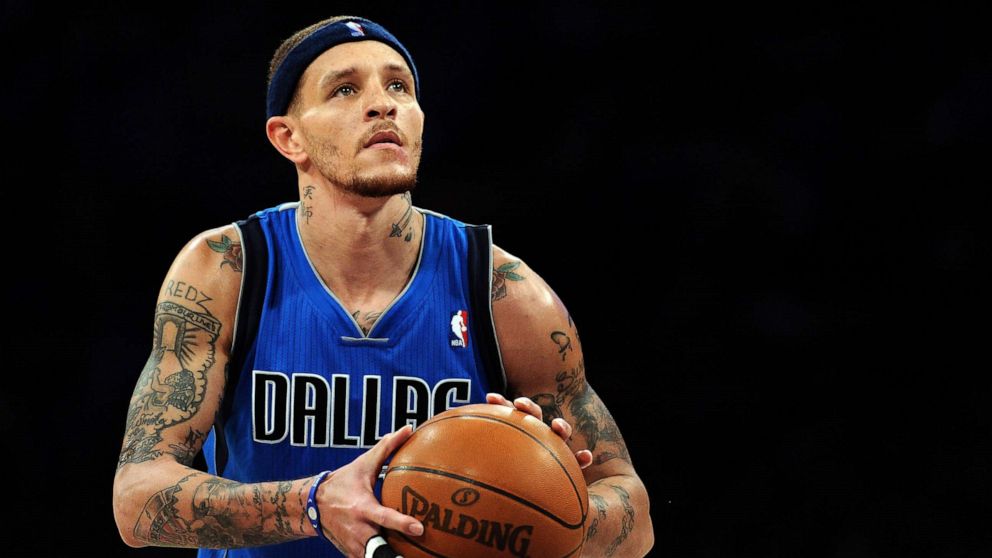 "Basketball you know, for some it is just something to do. For me, it [was] a lifestyle growing up in the DMV (District of Columbia, Maryland, Virginia region)," West told ABC News in April, in a rare interview.

Though West shined on the court, he suffered in silence. Despite clutch jumpshots and game-winning alley-oops, West was struggling mentally under the pressure to succeed, and any game-time highs were paired with personal lows.

Starting in 2013, West was acquired by the Texas Legends, part of the "minor league" NBA D-League (now known as the G League). He played with the team for the better part of the year before signing a 1-year deal with the Fujian Sturgeons in the Chinese Basketball Association. From there, he bounced around the international scene, heading back to the Texas Legends in 2015, before ultimately being waived in April that year.

Despite the constant back and forth, he said the game kept him going.

"Living a life of mental illness, they call it -- I like to say mental superpowers -- you know, basketball was always my escape." 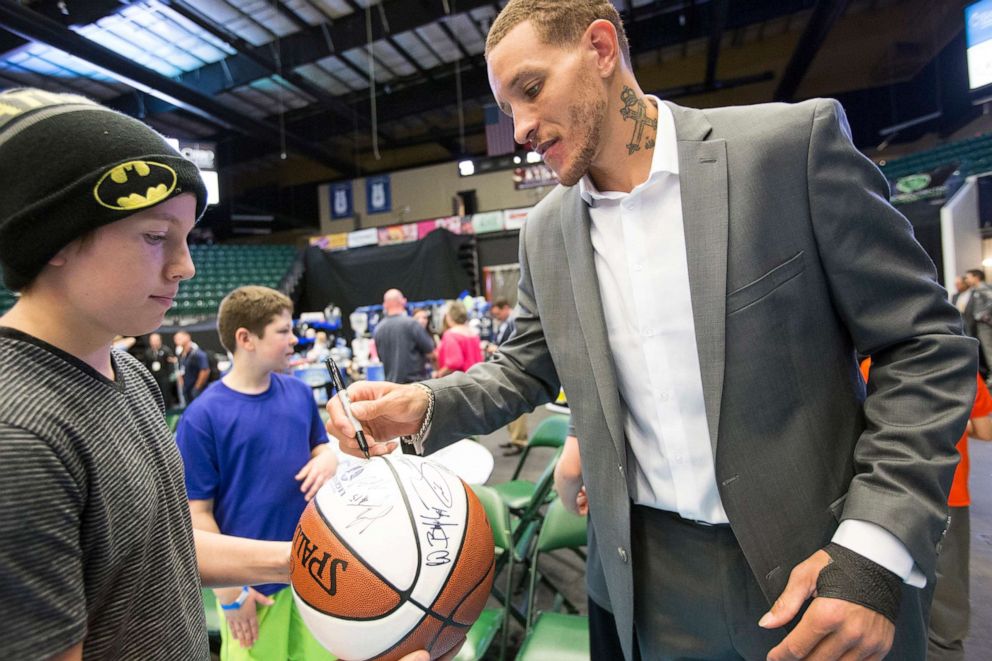 West was diagnosed with bipolar disorder in 2008.

Bipolar disorder, according to the National Institute of Mental Health, is a mental disorder that causes "unusual shifts in mood, energy, activity levels, concentration, and the ability to carry out day-to-day tasks."

"It's definitely been a spiritual journey you know, dealing with being bipolar," said West. "A missed shot or lost game, it can turn it into a spiraling snowballing depression type of thing where, you know, to where it takes me hours or it took me hours just to leave the gym."

West sought counseling and began taking medication but said the struggles between maintaining peace, calming his racing mind, and unleashing fury on the court were too tough to manage.

In 2012, the Mavericks suspended West twice, once for a reported locker room "outburst" and again for what the team's president of operations, Don Nelson, called "conduct detrimental to the team."

A series of off-court incidents accelerated his eventual exit from the game. A photo of West seen panhandling in Temple Hills, Maryland, went viral in 2016 leaving fans concerned, though West told the site Media TakeOut he had been helping an unhoused man in his neighborhood at the time, and was not homeless as some thought. 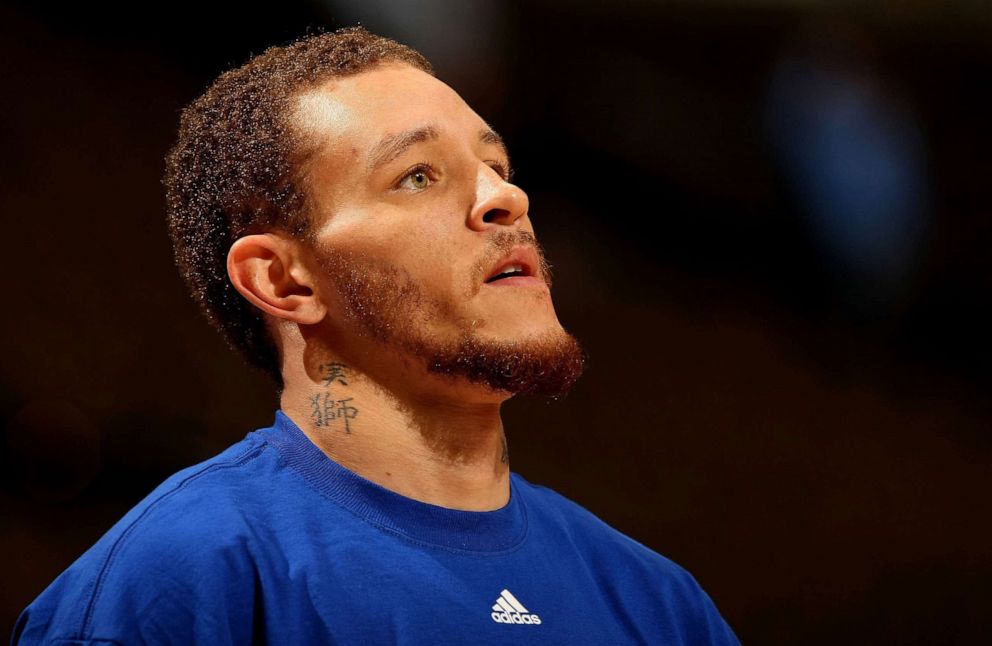 Doug Pensinger/Getty Images, FILE
Delonte West of the Cleveland Cavaliers looks on during warm ups prior to a game in Denver, Jan. 8, 2010.

In 2020, photos of West reportedly panhandling made their way across social media. Mavericks owner Mark Cuban later picked him up at a Dallas gas station in an attempt to help get West back on his feet, according to ESPN, which confirmed the story with Cuban himself.

"He's been in my corner," West added.

Cuban eventually helped reunite West with his mother and helped him financially, so West could focus on his family.

West has two children with wife Caressa Madden, whom he married in 2013.

"[Cuban] said, 'hey, man, listen, I'm giving you a break away from the game,'" West said. "I'm going to handle your finances, you know, give you some time to raise these two babies."

"He said, 'man the most important thing is that we get you feeling OK with yourself and being OK with life outside of basketball,' because that's the father my children need," he said.

West was still hopeful that he might get back into basketball. In April, he was working out daily to prepare for Ice Cube's Big3, a league made up of 12 teams of retired basketball players and international athletes, who play 3-on-3 games in an eight-week regular season. The league also hosts a playoff series and championship. 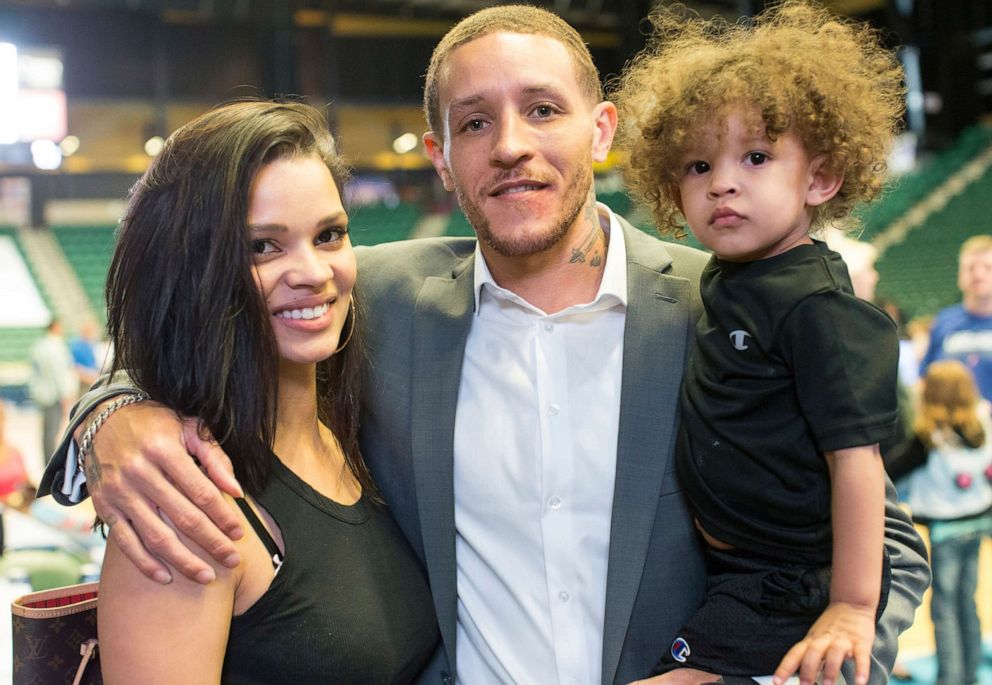 The Washington Post via Getty Images, FILE
Delonte West poses with his wife Caressa and one of his children, Cash, in Frisco, Texas, April 1, 2015.

West had punched his ticket to the tournament at the D.C. open tryout, and eventually made it to the second round Las Vegas combine.

"I was excited to have the opportunity," West told TMZ Sports at the time. "I'll be there next season. I'll be there rooting guys on."

Not every story has a fairytale ending, but West is still determined to make it meaningful.

Earlier this summer, he secured a freelance gig with ArmorGuard Coatings in Fredericksburg, Virginia, recently landing a flooring job at a Subaru dealership in the city.

"I told him that he can work with me full-time if he wanted but he told me he is still trying to do basketball," ArmorGuard owner David Drake told ABC News.

MORE: Dwyane Wade on how basketball made him a better father and husband

So Drake offered West a solution that worked for both of them: When a job is available, and West is available, he can work for the company and still have the time to focus on basketball.

"I told him I'm just trying to help him and help myself," Drake said. "I need a good worker and he's a good worker."

There's a lot in the air for West right now, and he's hopeful that things will start to fall into place soon.

His manager, Donovan Fordham, hopes so too.

"We've always known that Delonte's journey back to a normal life, a place of inner peace and even a return to a basketball career would be one of constant challenges," Fordham said in a statement to ABC News.

"But we both believe that, with the support of family, friends, former teammates and fans, he will overcome them and become the father, son, friend and teammate that we know he can be."