Just weeks before Halloween, law enforcement officials are warning about a deadly drug packaged in pills that "look like candy."

So-called rainbow fentanyl began showing up on the streets on the West Coast in February and has gradually made its way across the country.

This week, the U.S. Drug Enforcement Agency and law enforcement partners announced the first significant seizure of rainbow fentanyl. It happened on Sept. 28 when agents and officers stopped a vehicle on the Manhattan side of the Lincoln Tunnel that contained 15,000 multicolored pill with an estimated street value of $300,000.

The multicolored pills are similar in look to party drugs and meant to be more appealing to young people, according to the DEA’s Frank Tarrentino, who called it “newly packaged poison.”

“Fentanyl is everywhere and it is on everything,” Tarrentino said, noting some of the pills seized in the car were discovered in a yellow Lego box.

“The pills look like candy,” said New York City’s special narcotics prosecutor Bridgette Brennan. “We believe it is critically important to educate the public about this new form fentanyl is taking.” 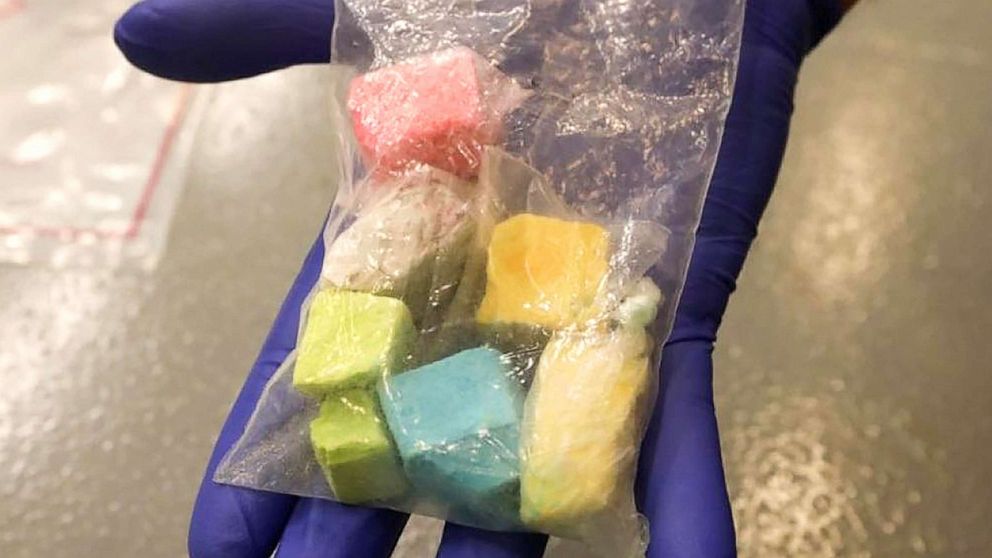 DEA
Examples of brightly-colored fentanyl cubes resembling sidewalk chalk that is being seized by the DEA.

Illicitly manufactured fentanyl, a powerful synthetic opioid, is one of the primary drivers of the significant increases in drug overdose deaths in recent years. More than 56,000 people died of from overdoses involving synthetic opioids in 2020, an increase of 56% from the previous year, according to the Centers for Disease Control and Prevention. 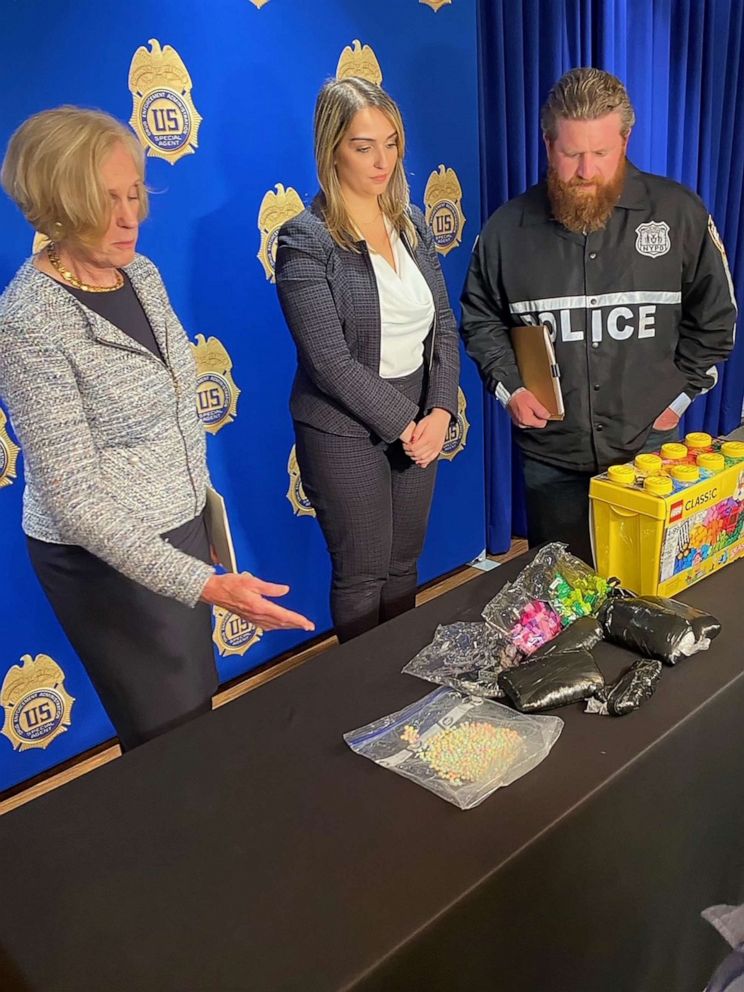 The pills are often made to resemble real prescription opioid medication like Oxycontin, Vicodin, and Xanax, or stimulants like Adderall, according to the DEA. Most are made in Mexico, with China supplying the chemicals.

In a warning issued in August, the DEA said that brightly colored fentanyl is being distributed not just in pill form but also "powder, and blocks that resembles sidewalk chalk." 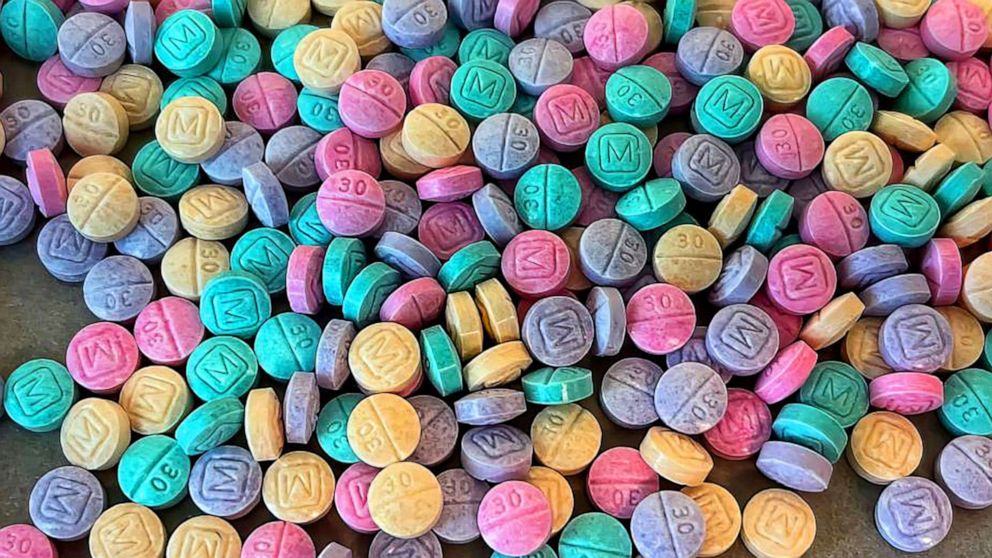 DEA
Brightly-colored fentanyl pills that are being seized by the DEA.

According to the agency, 2 milligrams of fentanyl, the equivalent of 10 to 15 grains of table salt, is "considered a lethal dose."

"Without laboratory testing, there is no way to know how much fentanyl is concentrated in a pill or powder," the DEA said. "Fentanyl remains the deadliest drug threat facing this country."

Amid all the recent warnings, statistics about rates of overdoses by so-called rainbow fentanyl are not available yet.

In response to the growing threat and the recent rise in deaths due to fentanyl, school districts in Florida, Texas and California have announced new plans to fight the crisis.

MORE: Mom warns others using a billboard after daughter dies due to fentanyl-laced pill

The Los Angeles Unified School District, the nation's second-largest school district, announced last month that naloxone, a medicine used to reverse the effects of an opioid overdose, would be available at all K-12 schools in the district in the coming weeks, provided for free by the Los Angeles County Department of Public Health.

The announcement comes after several suspected overdoses in the last month, with one juvenile dying at Bernstein High School in Hollywood, according to the Los Angeles Police Department.

Here are questions about fentanyl and the growing crisis, answered.

Why does fentanyl exist?

"It is a very good and effective medicine at relieving pain in appropriate quantities managed by anesthesia," Dr. Kimberly Sue, medical director of the National Harm Reduction Coalition and an addiction specialist at Yale University, told ABC News last year. "What we're seeing in the opioid overdose deaths in this country is related to fentanyl that is obtained outside of the context of medical prescriptions, usually on the street."

Why is fentanyl so deadly?

Fentanyl is dangerous because it "depresses" a person's respiratory function and central nervous system, and can cause a person to stop breathing, according to the Centers for Disease Control and Prevention.

If fentanyl is inhaled, consumed or injected it can be deadly, but a person cannot overdose by touching it.

How does a person know if they've taken fentanyl?

There is no way to know whether a pill or powder contains fentanyl by simply looking at it, and fentanyl has no distinctive taste or smell.

"In the case of a pill that you buy off the street, people should assume there is fentanyl present even if it is labeled as some other medication," said Sue. "I've taken care of many patients who think they're buying oxycodone or heroin and there's nothing in it. It's just fentanyl."

Fentanyl test strips are one tool people can use to test for the drug before consuming something that could be laced with fentanyl, like a pill, powder, nasal sprays or eye drops.

To use the strips, a person dissolves a small amount of the substance in water, and then dips the test strip into the water. The strips can give results in as little as five minutes, according to the CDC.

Is there a way to reverse a fentanyl overdose?

Naloxone, the medication being made available at all Los Angeles public schools, is the main tool used to reverse an overdose.

The medication, also known under the brand name Narcan, can restore normal breathing within two to three minutes in someone who has overdosed, according to the CDC.

MORE: LACDPH to give all K-12 schools naloxone amid opioid overdose increase: District

Naloxone is available in all 50 states, can be used without medical training and can be delivered by either nasal spray or injection.

In most states, naloxone can be purchased from a pharmacy without a prescription, according to the CDC.

Where does illicitly manufactured fentanyl come from?

Police and other experts say fentanyl and fentanyl-laced pills have been illegally imported from as far out as China and even smuggled through the U.S.-Mexico border.

Of the more than 11,000 pounds of fentanyl that made its way into the U.S. last year, more than half of it came through the border between Mexico and San Diego, according to investigators.

In some instances, Chinese drug suppliers send the ingredients to make fentanyl to cartels in Mexico. After creating the fentanyl, either in raw powder or pill form, the cartels would ship them across the border in trucks, according to investigators.

Border patrol agents have stepped up their searches for the pills and other related fentanyl contraband, officials told ABC News in May.

What do I do to help a person who is overdosing?

If you think a person is overdosing but are not sure, the CDC says to treat it like an overdose.

Signs that a person is overdosing may include small and constricted pupils, slow and shallow breathing, choking sounds, falling asleep or losing consciousness and pale, blue or cold skin, according to the CDC.

The first thing to do is call 911 immediately.

Next, the CDC says to administer naloxone to the person if it is available.

While administering help, try to keep the person awake and breathing and lay them on their side to help prevent choking.

If you or someone you love is in need of help, call 1-800-662-HELP (4357) or visit http://www.samhsa.gov/find-help to reach SAMHSA's 24-hour helpline that offers free, confidential treatment referral and information about mental and/or substance use disorders, prevention and recovery.

Editor's note: This report has been updated because the original version had an unverified TikTok video that has since been removed.