Scotland is on the verge of a historic first as it is poised to become the first country in the world to give period products to all women for free.

The Period Products (Free Provision) Scotland Bill received 112 votes in favor Tuesday in the Scottish Parliament. Members of Parliament can now propose amendments to the legislation, according to Reuters.

The bill would provide free period products to "anyone who needs them," according to the Scottish Parliament's website.

"Women and girls are too often left behind in the political process," the bill's sponsor, Monica Lennon, said Tuesday in Parliament. "This is a chance to put them first and to do something that is truly groundbreaking on gender equality." 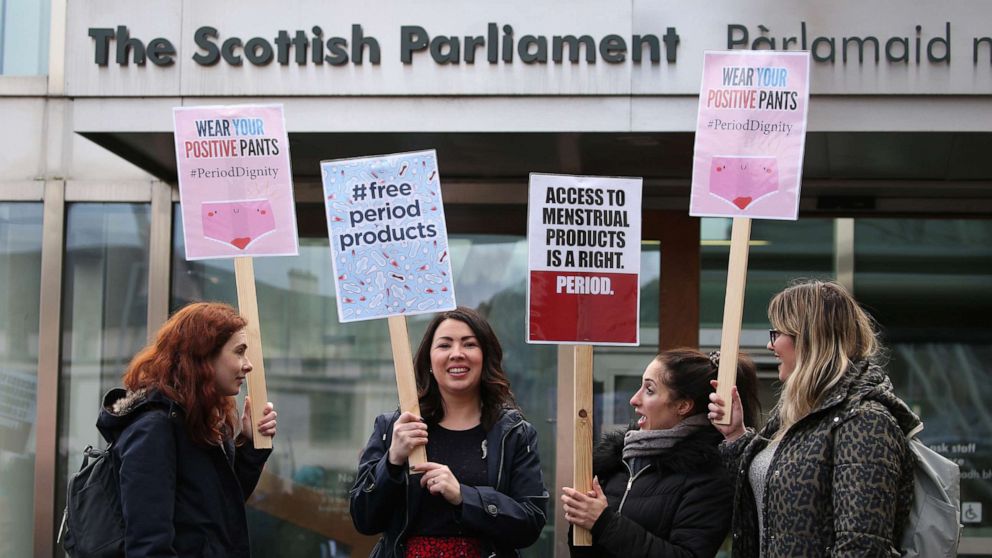 "Period dignity for all is not radical or extreme, but is simply the right thing to do," Lennon said.

Parliament approved Stage 1 of the Period Product (Free Provision) Scotland today. I am thankful to everyone who made it possible.

Was nice to have my daughter by my side as Scotland sent out a strong message on period dignity and gender equality. ❤️https://t.co/CzUKQ467Kn

Three years ago, in 2017, Scotland began offering sanitary products in schools, colleges and universities, becoming the first country in the world to do so, according to The Associated Press.

In the United Kingdom, 10% of girls are unable to afford menstrual supplies, according to a 2017 report by Plan International, a girls' rights organization.

In the U.S., where women make up more than half of the population, women are more likely than men to live in poverty, and they spend an average of 2,535 days in their lifetime, or almost seven years, on their periods, according to UNICEF.

A survey released last year of low-income women in St. Louis, Missouri, found nearly two-thirds couldn’t afford menstrual hygiene products in the past year, and more than one in five said they had the same problem every month. The women said they instead had to use cloth, rags, tissues, toilet paper and sometimes diapers or paper towels, according to the report published in Obstetrics & Gynecology.

The taboo around menstruation and the lack of access to menstrual products also hurts women economically because it costs them money for products and may keep them from jobs and school, advocates say. It also sets women back mentally and in a society where something that happens to them naturally is demeaned or even not discussed.

"Most of us have been conditioned for all of our lives to not talk about menstruation," said Jennifer Weiss-Wolf, a lawyer and author of "Periods Gone Public," told "Good Morning America" last year. "And the things that keep us potentially from succeeding are often the things that happen to be what we don’t talk about in polite society." 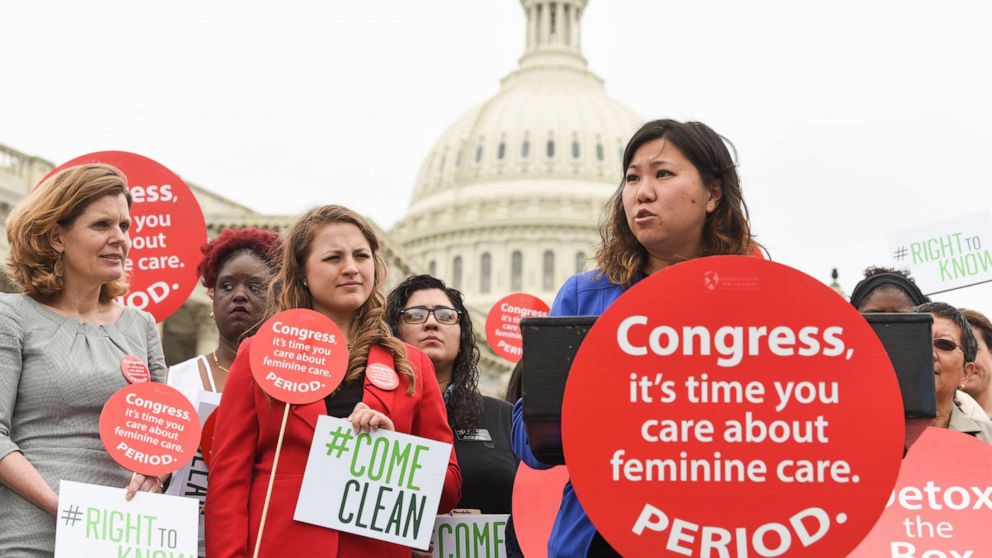 Kevin Wolf/AP Images For Seventh Generation, FILE
Rep. Grace Meng speaks at a Women's Voices for the Earth's women's health rally supported by Seventh Generation on the grounds of the Capitol on May 23, 2017, in Washington.

Meng's "Menstrual Equity for All" bill also proposes changes like requiring corporations of 100 employees or more to provide free menstrual products to employees. Her "Menstrual Products Right to Know" bill would make tampons and pads just like most other products where manufacturers are required to list out their ingredients.

Both of those bills are still pending in the House, while legislation she worked on in the last Congress that would allow people to use health savings accounts to buy menstrual products passed the House but was never taken up in the Senate.

"I don’t want to, as I [did when I] grew up, feel like I have to hide my product up my sleeve as I’m walking through the halls of school or the office toward the bathroom," Meng told "GMA" last year. "This is a natural part of being a human being and I don’t want people to be ashamed of it."