May 28, 2022 is Menstrual Hygiene Day, an annual awareness day to help normalize menstruation and highlight the of period poverty around the world, according to the United National Population Fund.

A middle school teacher in Texas is making sure no student has to miss class time due to or feels ashamed of their menstrual cycle.

Kylie DeFrance, an English as an additional language (EAL) teacher at a charter school in Austin, keeps "pad bags" filled with feminine hygiene products at her desk in her classroom so that any student can take them at any time.

It's a practice she said she began in her first year of teaching eight years ago when she saw female students, or, as she calls them, scholars, missing instruction time due to their periods.

When DeFrance started providing free pads and tampons and heating pads to her students, she said she saw they were able to stay in class and focus on learning.

"It is such a huge difference to see how much instructional time that they are not missing that they were before," she said. "I had one scholar who would literally disappear into the bathroom for 30 minutes, five days a week, once a month, who is now not disappearing in the bathroom at all, and her grade went from a 'D' to an 'A.' She's an excellent scholar."

DeFrance continued, "That just goes to show that having your period should not conflict or cause a difficulty with your learning if you're provided with the things that you need to be provided with." 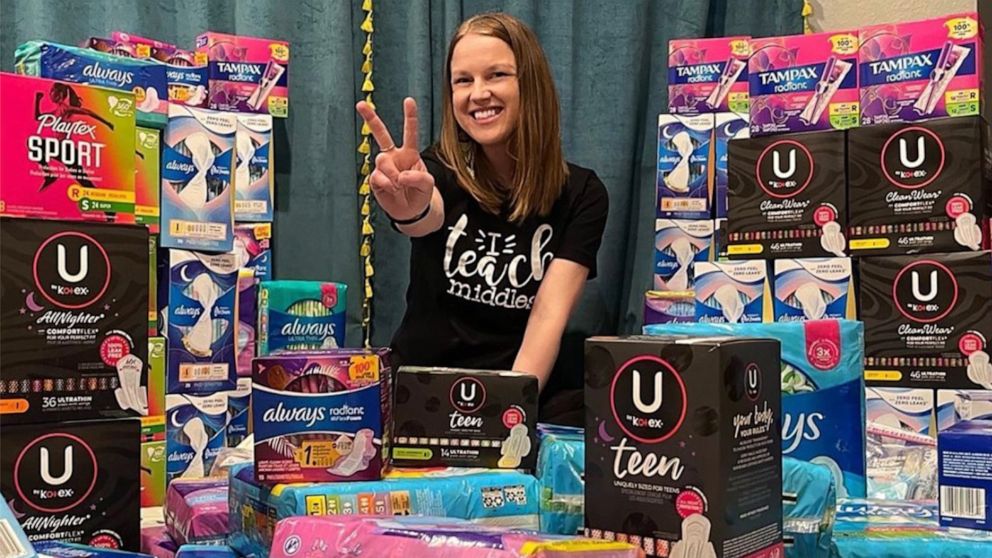 Courtesy Kylie DeFrance
Kylie DeFrance, a teacher in Austin, Texas, collects feminine hygiene products to give to her students for free.

When DeFrance started a new teaching job last August at Austin Achieve, a public charter school, she said she purchased feminine hygiene products at her own expense to store in her classroom.

As word spread at the school that DeFrance had easy-to-access period supplies in her classroom, she said the demand grew and she was soon spending over $100 per month on her own on supplies.

DeFrance said she quickly realized that for many of her students, her classroom was their only access point for supplies. Over 90% of students at Austin Achieve, a year-round school, qualify for free or reduced lunch, according to the school's website.

"A lot of the scholars go home and they're the parents for their siblings because their parents are at work," said DeFrance. "Or maybe their parents can't take them to the store because they're having to choose between food and this."

"I’m not ever going to say no and turn a scholar away," she said. "So I started keeping multiple pad bags and started asking scholars, ‘Do you need to take this home?’"

MORE: Breaking the stigma of painful periods: 'They should not be debilitating'

Period poverty, when people cannot afford even the most basic of period supplies like pads and tampons, is an issue that affects women around the world, including the United States. A lack of access to menstrual products and education affects 1 in 10 college students in the U.S., according to a study released last year.

Hoping to be able to provide more supplies to more students at her middle school, DeFrance added feminine hygiene products to her Amazon wish list, which she said typically consists of books she needs for her classrooms.

In addition to sharing the link on her Instagram page, DeFrance also posted her wish list on Nextdoor, a social networking service for neighborhoods.

Within hours, according to DeFrance, Amazon boxes filled with period supplies began showing up at her doorstep, all donated by strangers through her wish list. 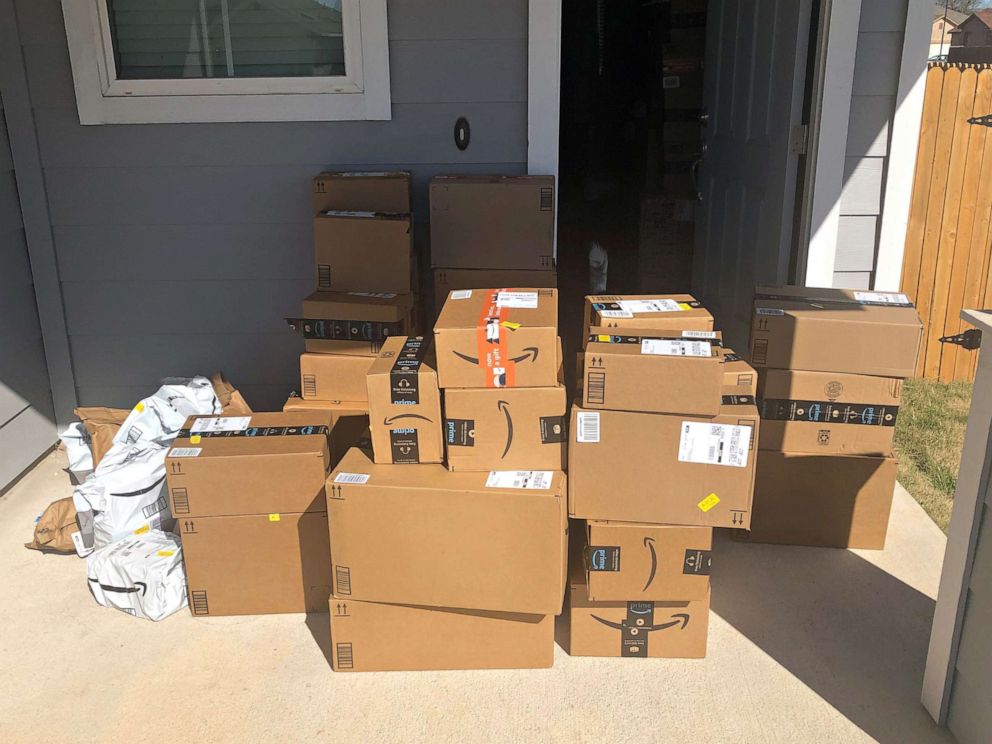 The boxes have continued to pour in, according to DeFrance. She said that since February, people have donated over 6,000 pads and 3,000 tampons, in addition to other supplies, like disposable heating pads. 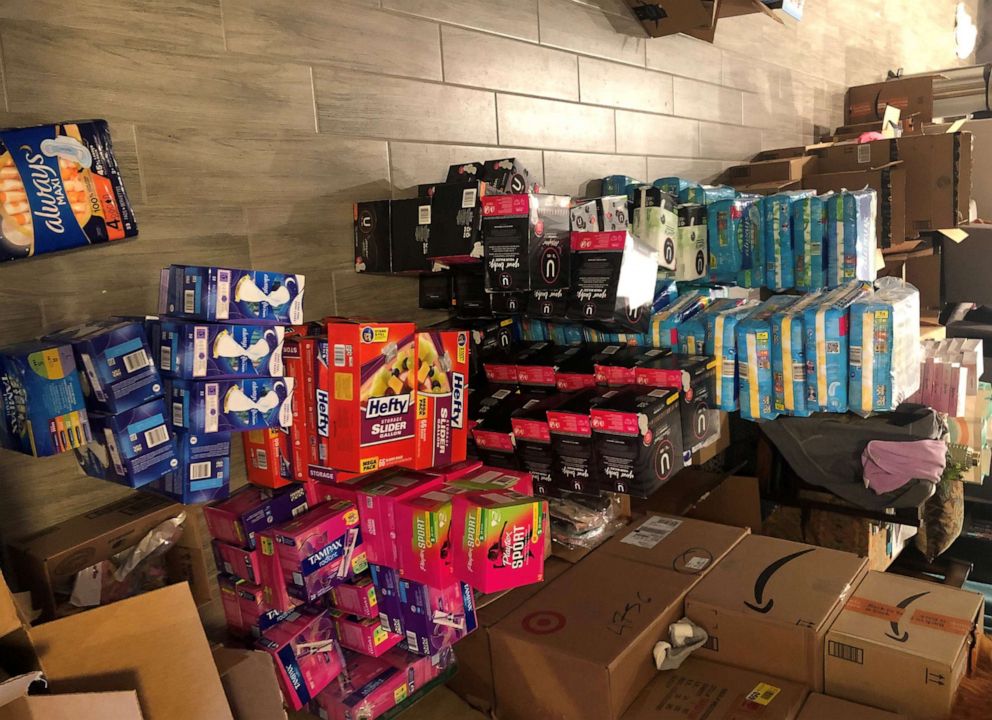 DeFrance has also been able to upgrade her "pad bags" from plastic sandwich bags to reusable, zipper bags thanks to strangers' donations. This week, she also received donations of two portable carts that she said she plans to turn into "menstruation stations" in her classroom.

After her story went viral, DeFrance was contacted by Always, a maker of feminine hygiene products, with an offer to donate Always Pads, a commitment confirmed to ABC News by a spokesperson for the brand.

DeFrance said that because her school has students in fifth through eighth grades, she is often meeting students as they are starting their menstrual cycles. She focuses on keeping supplies in her classroom and easily accessible in hopes of "normalizing" the conversation around periods. 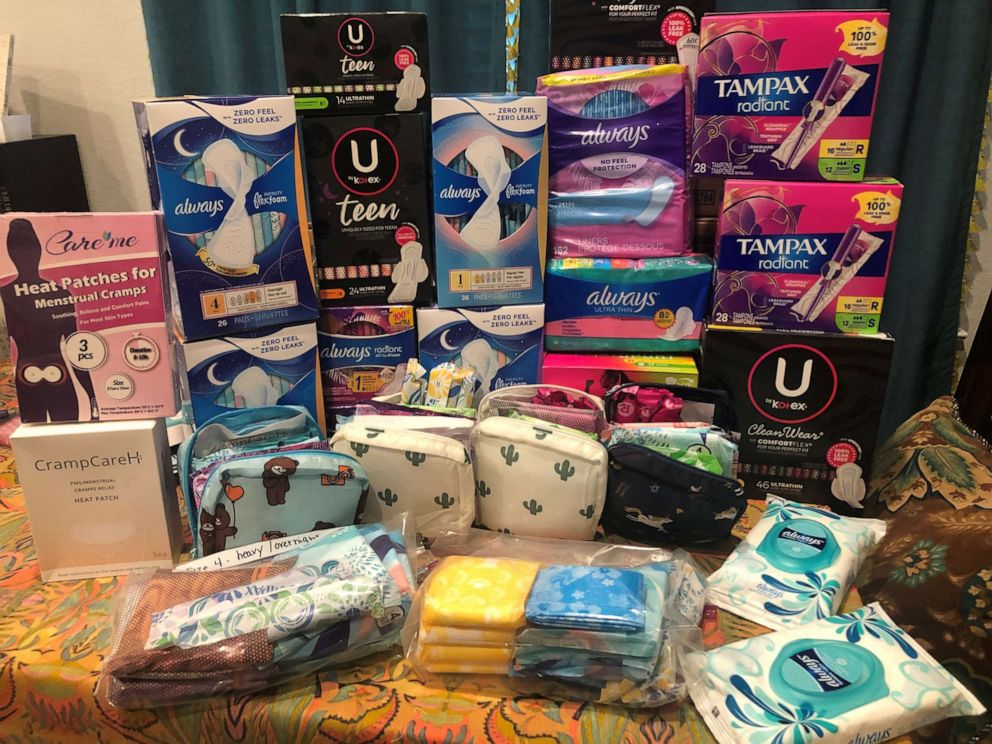 Advocates for menstrual equity say the taboo around menstruation and the lack of access to menstrual products hurts women economically because it costs them money for products and may keep them from jobs and school. Poor menstrual hygiene poses health risks for women, including reproductive issues and urinary tract infections.

On average, a woman will spend around seven years in their lifetime on their period, according to UNICEF.

DeFrance said that in her case, due to the surplus of donations, she has plans to put free period supplies in her school's bathrooms and has already provided period products to teachers at nearby schools to distribute for free. She said she is also meeting this week with the leaders of Austin Achieve's high school to discuss making supplies more accessible to students there.

Editor's note: This report was originally published on April 13, 2022.