A woman who survived three heart attacks in three days at age 40 is now leading an effort to make Black women aware of the risks of heart disease.

Tara Robinson, of Grand Prairie, Texas, is the founder of the Black Heart Association, a nonprofit organization whose mission is to "significantly lower the number of Black deaths caused by heart disease and stroke each year."

Heart disease is the leading cause of death for Black women in the United States, according to the Centers for Disease Control and Prevention (CDC).

Across all races, heart disease causes one in every five female deaths each year, while only about half of women know that heart disease is their No. 1 cause of death, according to the CDC.

Robinson, now 48, said she had no idea she was at risk for a heart attack, even though she later realized she had symptoms months before, including fatigue, numbness in her arm and pain in her neck.

"I had 99% blockage in my main artery, known as the 'widow maker,'" Robinson told "Good Morning America." "I was completely healthy as far as I knew. No high blood pressure, no cholesterol or diabetes, nothing, but I was highly stressed."

Robinson said she was even told by doctors that she was too young to be having a heart attack. After she recovered, she said she made it her mission to educate other Black women on the health screenings to get and signs and symptoms to watch.

"The reason God saved me is because I have to do this work," she said. "I'm the heart healer, mentally and physically."

Robinson is the brains and heart behind her organization's mobile heart center, a bus that provides free health screenings across the Fort Worth area.

"Our goal with the mobile bus is to make sure that we are wherever our people are -- that’s at the car wash, the barber shop, the beauty shop, the church," she said. "Wherever you are, that's where the bus can pull up to." 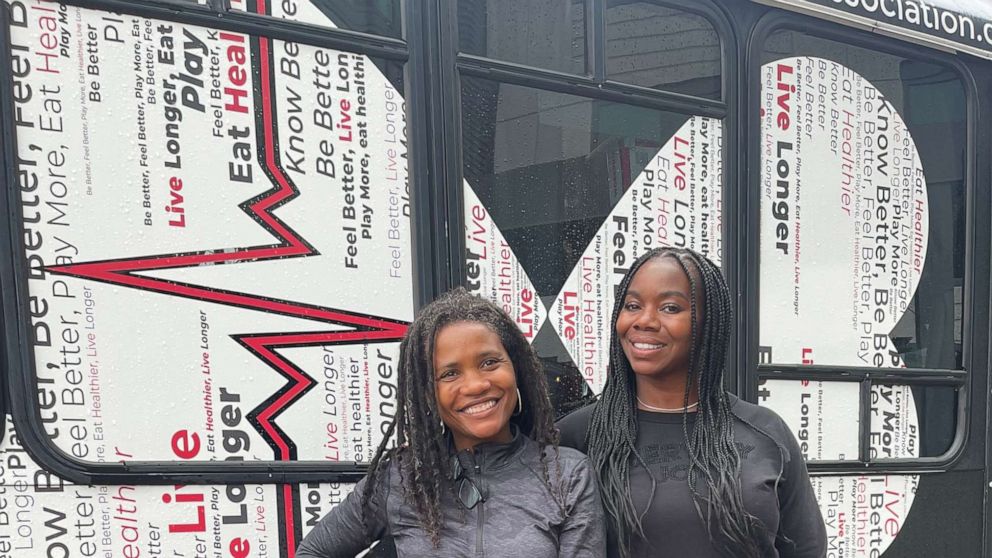 According to the CDC, women can reduce their risk of heart disease by getting routine screenings for everything from diabetes and blood pressure to cholesterol and triglycerides.

Black women in particular are more likely to have conditions that increase their risk of heart disease, including high blood pressure, diabetes, obesity and pregnancy-related complications, according to Dr. Sandy Charles, a cardiologist and medical director of Novant Health Women's Heart and Vascular Center in Charlotte, North Carolina.

"These things frequently cause no symptoms and we don't know we have them unless we get screened," Charles said of the risk factors, adding that women can also ask for specific tests like stress tests and CAT scans to check their heart health.

High cholesterol can contribute to plaque, which can lead to clogged arteries. A total cholesterol of less than 200 mg/dL is considered desirable, including less than 100 mg/dL of LDL and 60 mg/dL or more of HDL, according to the CDC. The recommendations for when to check cholesterol are once every five years after the age of 20, and more frequently if you have a medical condition such as high blood pressure, diabetes or obesity, according to the CDC.

MORE: I survived a heart attack at age 30: Here's what I want women to know

Women can also reduce their risk of heart disease by making lifestyle changes including staying active and eating a clean diet free of foods high in sugar, fat and cholesterol, according to Charles.

When it comes to recognizing a heart attack, women may not experience any chest pains at all, according to Charles. She said symptoms to watch for include shortness of breath, fatigue, nausea and indigestion.

"It's so important for women to know, and for everyone to know, that nobody knows your body better than you," said Charles. "So if something doesn't feel right, do not ignore the symptoms."