A first-of-its-kind study has provided new evidence that wearing a virtual reality (VR) headset during labor can reduce pain levels and heart rates for moms.

Women who did not use a VR headset also had a higher heart rate than women who did, according to the study.

“VR is already being used effectively by the medical community in a variety of applications, such as helping to rehabilitate people who have had a stroke or other brain injury, and for overall pain management," the study’s lead author Dr. Melissa Wong, a maternal-fetal medicine subspecialist at Cedars-Sinai in Los Angeles, said in a statement. "However, using VR to help ease labor pain is one of the least looked at applications."

“I think there is a tremendous opportunity to offer VR as another safe and effective option — and one that is medication-free ― to help ease a woman’s pain during childbirth," she said.

The study -- which looked at women who had not received any medication for pain -- is the largest to date looking at VR during labor.

Wong told "Good Morning America" last year she was motivated to study VR in labor because of growing patient demand for drug-free deliveries and what she described as "indisputable data" showing that VR can help with medical conditions including depression and anxiety as well as acute and chronic pain.

"VR, to me, represents potentially one other method for helping manage pain that would be non-pharmacological for women interested in it," she said. "It doesn’t have to be in lieu of anything and it doesn’t have to replace epidurals for women."

For the study, Wong worked with a California-based VR company that enlisted the help of a doula to create visualizations and guided narration focused on getting pregnant women through contractions and delivery.

Wong studied 40 first-time moms for the trial, checking their vitals and pain levels as they used the VR headset for up to 30 minutes during the labor process, three times the length of use examined in a previous study.

"Laboring women represent a population that is vulnerable and looking for options for complementary and alternative methods for managing pain," she said. "I wanted to make sure there was data instead of virtual reality being something that was going to be marketed, quite frankly, inappropriately."

"If this is proven by data again and again to be beneficial, then it becomes something that women who believe they could benefit from it can use," she said, noting other labor options at Cedars-Sinai include birthing balls, aromatherapy and birthing tubs.

There are only a very small handful of hospitals in the U.S. known to offer VR to women, according to Wong.

One is the Greater Hudson Valley Health System in Middletown, New York, where Erin Martucci, a mom of three in New Hampton, New York, wore virtual reality headsets while giving birth to her two youngest children.

The 43-year-old had such a quick labor with her first child, a now 4-year-old son named Michael Jr., that she wanted to go drug-free giving birth to her second child, just over one year later.

Martucci said she barely knew about virtual reality, much less the fact that the technology was being used for labor. As her labor progressed, and the pain grew more intense, Martucci's obstetrician offered the option of trying a VR headset. 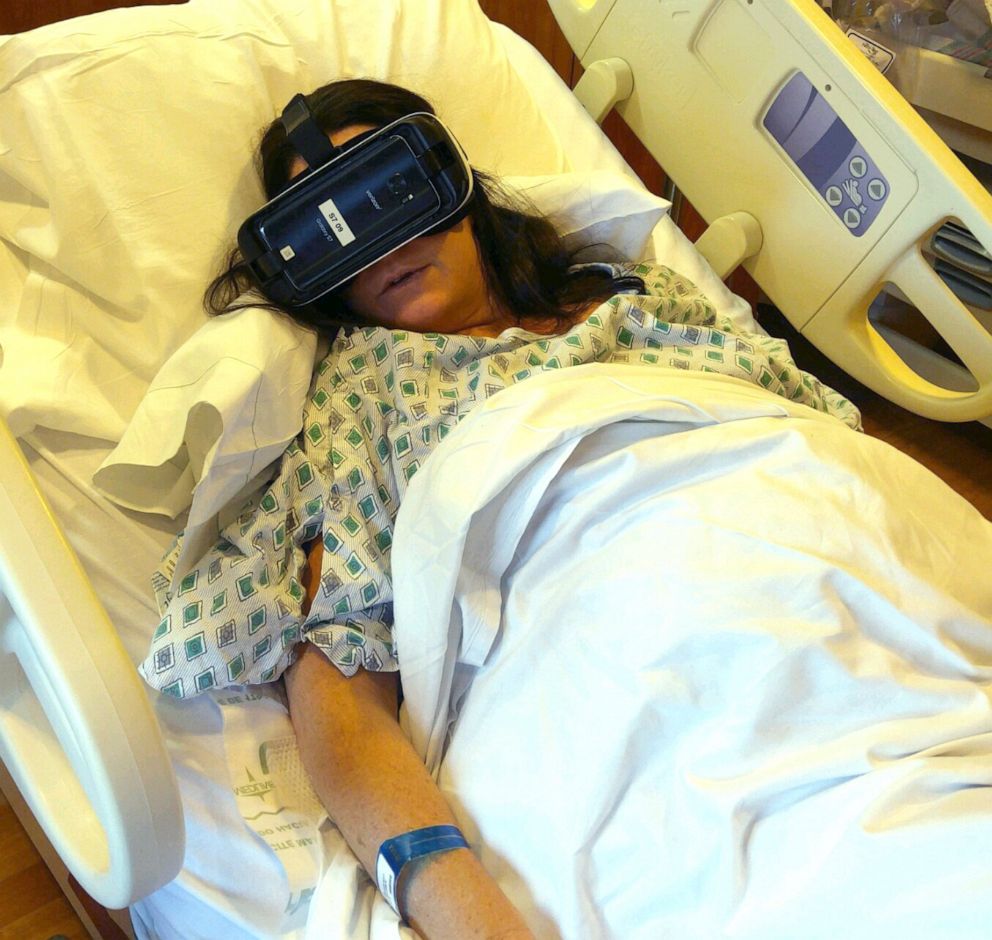 "[The doctor] came in with the equipment and put it on my head and the scene was a beach and there was also a voice guidance," Martucci told "GMA" last year. "The voice guidance and the visual calmed me down and made me know I could get through the labor without drugs."

"When [the doctor] came to take them off I was like, 'What are you doing because I’m using them,'" she recalled. "He said, 'You’re going to push your baby out,' and literally one or two minutes later I pushed the baby out." 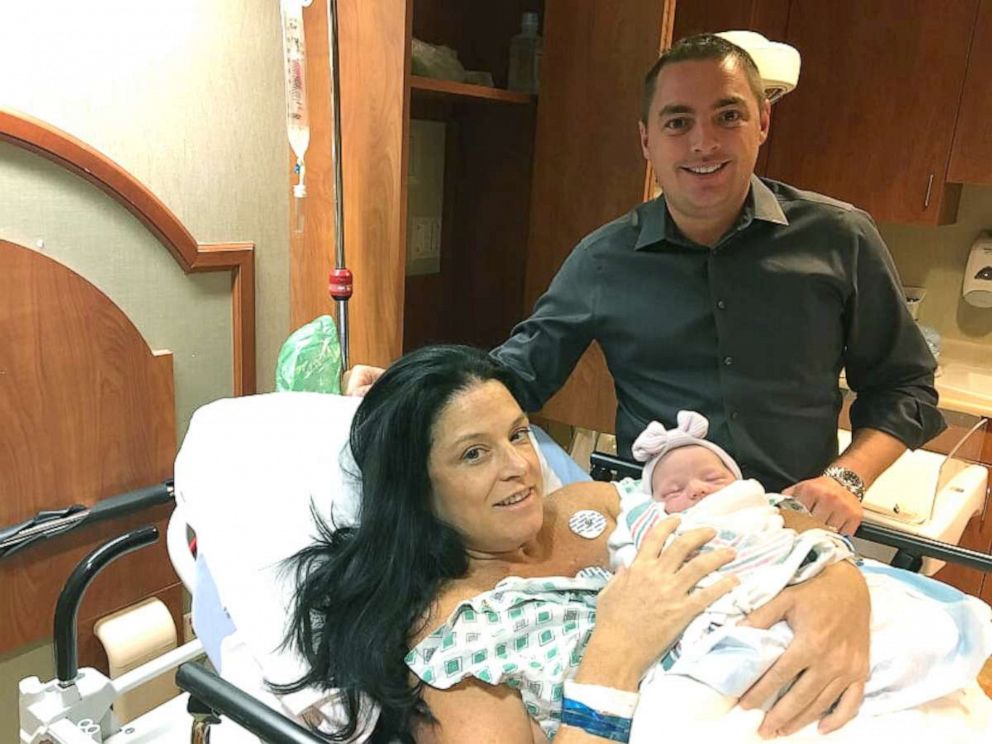 Martucci's daughter, Elizabeth, now 3, was born healthy and happy after about four hours of labor. Martucci said she wore the virtual reality headset for about half the labor, or two hours.

In October, Martucci gave birth to her third child, another daughter whom she and her husband Michael named Catherine.

Martucci again wore a VR headset for about 30 minutes during labor, from the time doctors broke her water to right before Catherine was born. 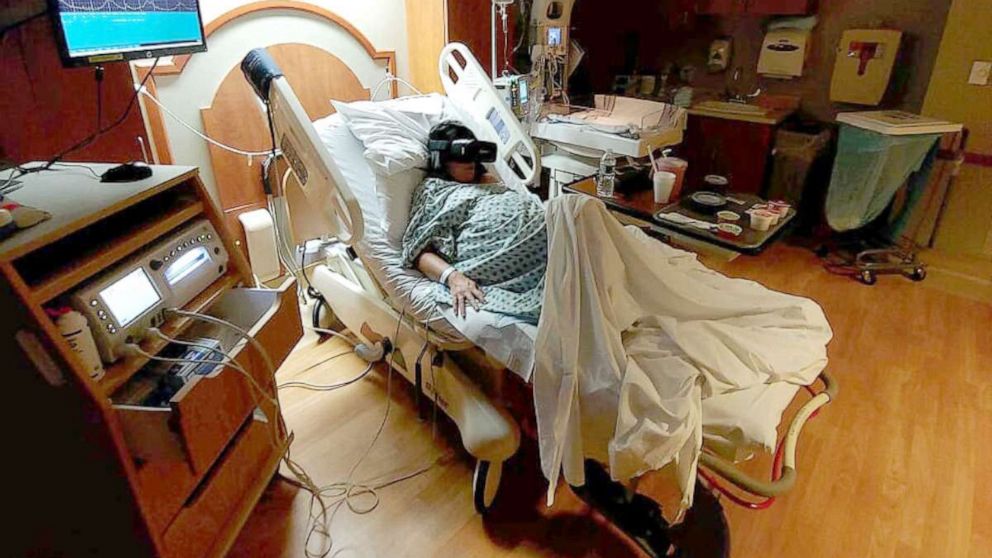 "You know your body is progressing through labor but it gives you something to concentrate on," Martucci said of the VR technology. "I really focused on what was presented in front of me during contractions and the guidance helped me breathe and stay in control and calm."

The Greater Hudson Valley Health System in Middletown, New York, declined to comment to "GMA" about its VR offering for women in labor.

One of the only other studies on VR during labor, a pilot study released last summer, looked at 27 women using VR headsets with non-pregnancy specific visual and auditory guides.

"Labor is a very specific pain and it's different than other areas of hospital treatment because it can last for hours," said David Frey, a board-certified anesthesiologist and one of the study's co-authors. "VR affects the brain and response in different ways than classic types of distraction because it's more immersive and therefore takes up more attentional resources."

The study's authors concluded that VR is a "potentially effective technique for improving pain and anxiety during labor," but more research needs to be done, notes another co-author, Melissa Bauer, a professor and obstetric anesthesiologist at the University of Michigan, where the study was based.

"Some patients may get bored with it and get fatigue and some patients who are prone to motion sickness may have nausea using it," Bauer said of possible side effects to be considered. 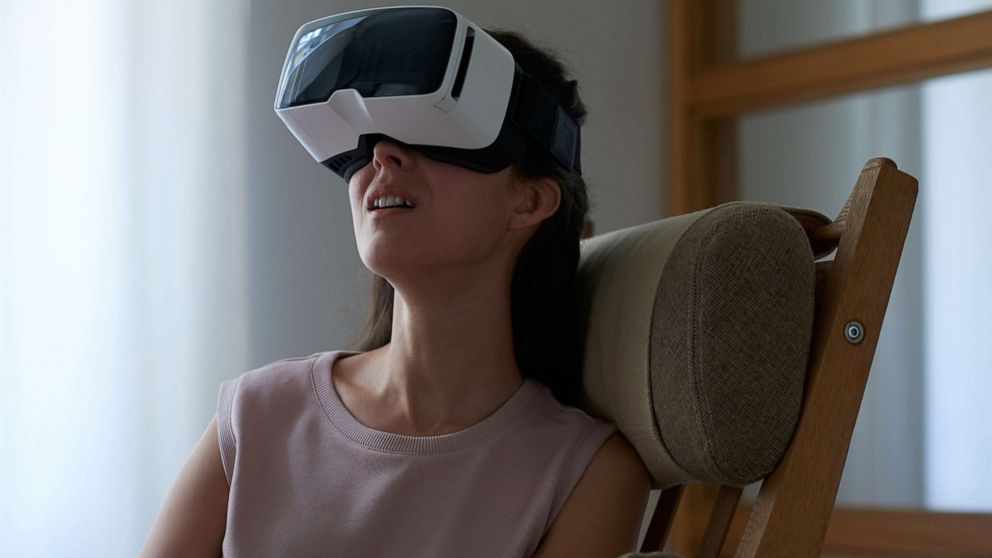 Bauer points out that the epidural that a majority of women choose to use for pain management during childbirth is also a safety feature for them. If a woman requires an emergency C-section, doctors use the epidural catheter to quickly provide anesthesia.

That would be missing for women who choose a drug-free option like VR.

"Our main goal is to keep the baby and mom safe," Bauer said. "[Doctors] want to see good, strong evidence when they’re going to use something on a pregnant person, which is reasonable."

Bauer and Frey both said they believe the popularity of VR for women in labor will depend on how quickly content makers see the market demand and create the pregnancy-specific content that will be the most beneficial.

They hope that female content makers step in to help fill the void.

"The cost of hardware is decreasing and the level of immersion is increasing and coming in easy mobile packages that would be easy to use and intuitive for first-time users," said Frey. "It really depends on the creation of new content at this point."