Schneider's 40-game winning streak, which began Nov. 17, came to an end Wednesday when she lost to Rhone Talsma, a librarian from Chicago, in a competitive game. She remains insecond for all-time consecutive wins, only behind Ken Jennings, whose 74-game record has held since 2004.

Speaking out Thursday morning after her "Jeopardy!" loss, Schneider told "Good Morning America" it was "hard to be that sad when I've done so much better than I expected" and she "could never be disappointed in winning that many games."

Schneider also said she felt her time was "coming to an end" and she "couldn't quite explain it." Part of it, she said, was feeling that the milestone of surpassing Jennings in wins "still felt unfathomably far away" after overtaking Amodio. "It just sort of seemed like I had done all I could do," she said.

In the end, Schneider told "GMA" she wanted to send a message to her fans -- and one to the trans community, too.

"If you've got a goal and you're kind of beating your head against the wall with it trying to achieve it and it doesn't feel like you're getting anywhere, I think it's definitely worth persisting," she said. "Again, specifically to trans people out there, anything you wanted to do before you can still keep chasing those same dreams."

The "Final Jeopardy!" which proved to be Schneider's downfall was from the "Countries of the World" category. The clue read: "The only nation in the world whose name in English ends in an 'H,' it's also one of the 10 most populous." The answer: "What is Bangladesh?"

"It's really been an honor," Schneider said in a press release. "To know that I'm one of the most successful people at a game I've loved since I was a kid and to know that I’m a part of its history now, I just don't know how to process it." 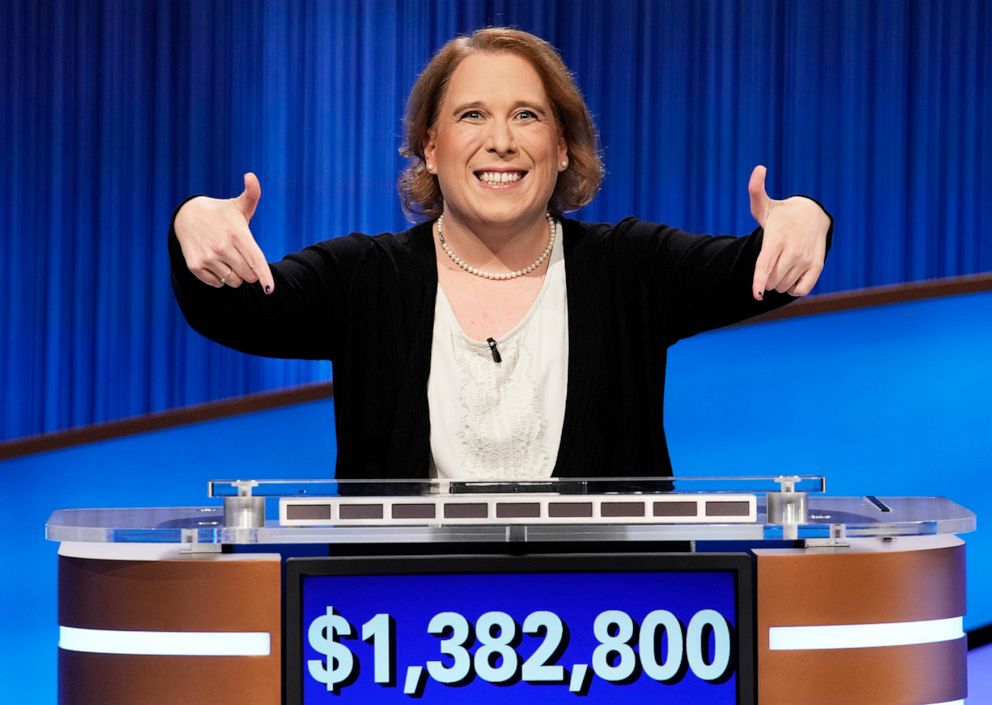 Jeopardy Productions, Inc.
Amy Schneider on the set of "Jeopardy!" for the episode dated Jan. 26, 2022.

Beyond setting records, Schneider -- an engineering manager from Oakland, California -- has left a lasting impact on "Jeopardy!" as the show's most successful trans champion thus far.

Schneider recently told "Good Morning America" that her favorite part of her "Jeopardy!" experience was "being on TV, you know, as my true self, expressing myself and representing the entire community of trans people."

During her time on the beloved quiz show, Schneider has used her platform to discuss the importance of trans visibility and representation. She wore a trans flag pin on the Thanksgiving episode to send a message to the LGBTQ+ community during the holidays and deflected anti-trans bullying directed at her on social media in a single tweet.

Schneider will return to compete in the next Tournament of Champions, set to take place this fall. "It's going to be really challenging; a lot of strong players there, but it should be a lot of fun," Schneider told "GMA" on returning to face fellow "Jeopardy!" champions.