Jeff Benjamin is a Billboard contributor who writes the site's K-pop column.

At this point, it's nearly impossible to ignore the growing impact of BTS. The South Korean–based boy band is making their debut on "Good Morning America" on Wednesday, Sept. 26, coming through with a hurricane of exciting activities as they hit New York City. 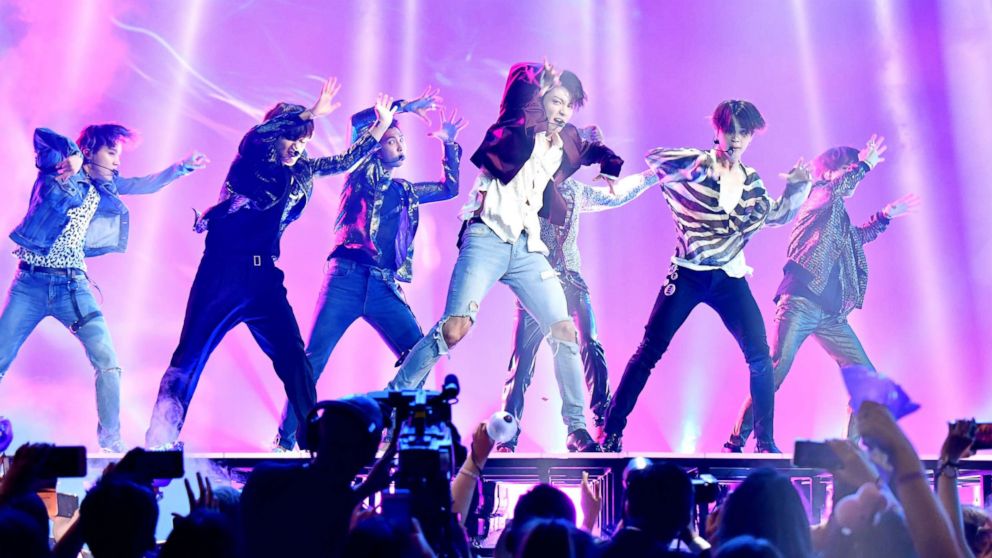 Whether or not you've kept track of their chart-topping albums, humongous social media impact or growing legion of famous super fans that includes Nicki Minaj, Tyra Banks and John Cena, the septet -- consisting of leader RM, Jimin, J-Hope, Suga, Jin, V and Jungkook -- will not slow down anytime soon as they address the United Nations in a history-making speech to take a moment to shed light on how their highly successful anti-violence campaign is making change in the world.

"BTS launched the Love Myself campaign with UNICEF, built in our belief that true love first begins with loving myself," RM explained while addressing the UN General Assembly with his bandmates at his side. "After launching the Love Myself campaign, we started to hear remarkable stories from our fans all over the world -- how our message helped them overcome their hardships in life and start loving themselves. These stories constantly remind us of our responsibility."

"Yesterday's me is still me...today I am who I am with all my faults and mistakes." -@BTS_twt

The guys have two sold-out shows at Newark's massive Prudential Center on Sept. 28 and 29, ahead of another sold-out show days later at the famous Citi Field stadium in New York in early October. And that's just a portion of their plans for the next few days.

Now, that we've got your attention, get to know the boys a bit better with five must-know facts about the group that goes beyond basic BTS knowledge.

1. BTS connected around the world with universal, socially conscious music

Boy bands often get an unfair tag for making fluffy, bubblegum pop, but BTS is quickly changing that notion. Apart from their forward-thinking productions and a meticulous blend of vocals and rapping, a major part to their music's crossover success comes in the universal topics they tackle of which anyone in the world can connect -- regardless of language.

BTS' most recent, three-part trilogy album of "Love Yourself: Her," "Love Yourself: Tear" and "Love Yourself: Answer" detail a journey to self-acceptance as the band moves from jaunty reflections on society, deal with darkness and heartbreak, and find light and self-love by the end of the series. Songs that best represent their universal messages are perhaps best seen in tracks like "134340" (a breakup song with its title taken from the name given to Pluto when it was downgraded from planet to asteroid), "Pied Piper" (detailing the pitfalls of blind fan culture and encouraging their supporters to not to lose focus of their own dreams) or "MIC Drop" (inspired by Barack Obama's swag-tasticly famous White House Correspondents Dinner speech from 2016).

From school bullying and politics to female empowerment and mental health, BTS has always made it a central point to have impactful themes and deeper lyrical reflections in their tracks. 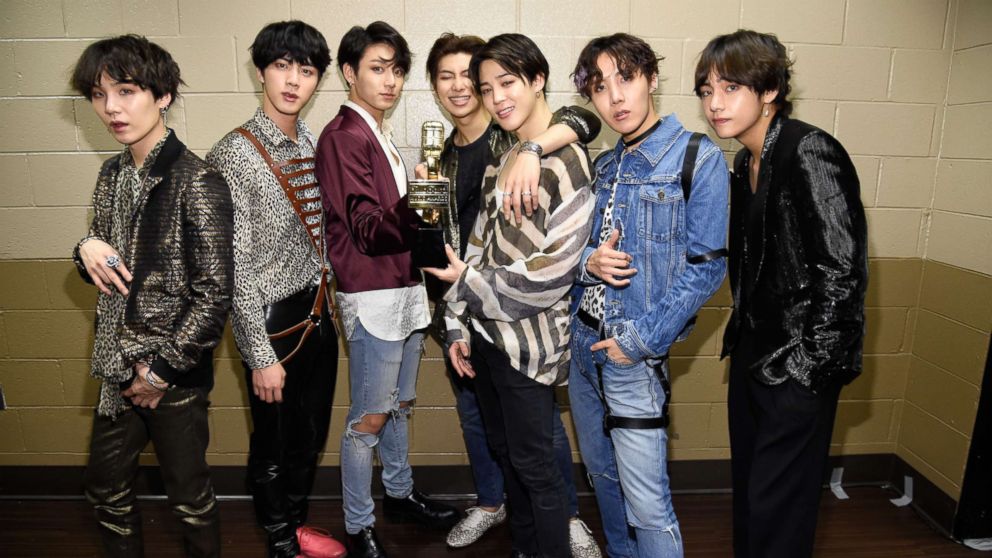 The K-pop industry is extremely competitive and only growing more so as the scene rises internationally. BTS was helmed and groomed by BigHit Entertainment, at-the-time a very small K-pop agency and label that had only minor successes with their previous acts. Signing with an established agency ups a K-pop hopeful's chances for recognition and fame tenfold, but BTS overcame the odds to break away against all premonitions one may have about the industry.

While it may be easy to magnify BTS' success and show how far they've come among all Korean acts, the numbers prove them to be a sales and touring force to be reckoned with no matter what genre you compare.

Earlier this month, BTS scored their second No. 1 album of 2018 when "Love Yourself: Answer" conquered the Billboard 200 albums chart just after "Love Yourself: Tear" topped the list in June. The last pop act to score multiple No. 1s in less than a year? That would be One Direction -- a supergroup whose presence and impact can still be felt on today's pop charts.

"Answer" also scored the third-largest sales week in 2018 for a pop album, second behind only 2018 Super Bowl performer Justin Timberlake and Shawn Mendes.

Plus, BTS saw the tickets to their special concert at Citi Field, home to the New York Mets, sell out in 20 minutes, putting them in an elite group of performers who have played the baseball stadium that includes Beyoncé, Jay-Z and Lady Gaga. 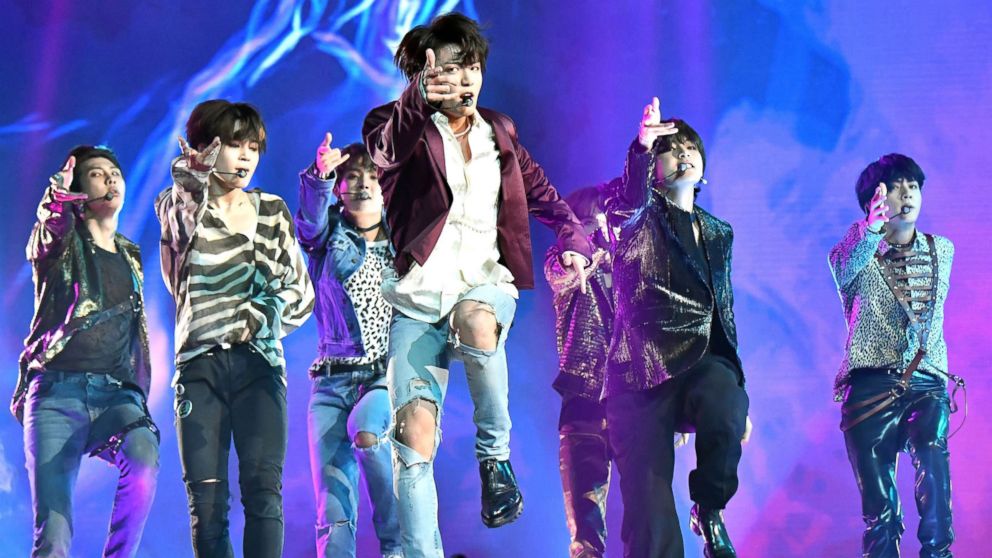 4. But BTS is still proud of their K-pop roots

While Korean acts have spent nearly a decade attempting respectable-but-minimally impactful crossovers, BTS has risen above not by singing in English or catering to the Western market, but instead by focusing on what they do best.

"Hitman" Bang, the CEO of BigHit Entertainment, gave his first U.S. interview to Billboard in 2017 where he shared his company's belief on creating music with international appeal.

"I'm not a believer in releasing full English songs to the U.S. market like many K-pop artists have," the executive said. "We must focus on what we do best as K-pop artists and producers."

The boys proved that with their latest single "Idol," where the group's leader RM kicks off the track with the line, "You can call me artist / You can call me idol," the latter lyric addressing a common term given to K-pop stars in the industry that many feel strips the singers of their artistic identities.

But BTS is saying you can call them either an artist or an idol, it's all the same since they later declare in the song, "You can't stop me lovin' myself" on the track that is mostly sang in Korean and even incorporates traditional instruments from their home country. 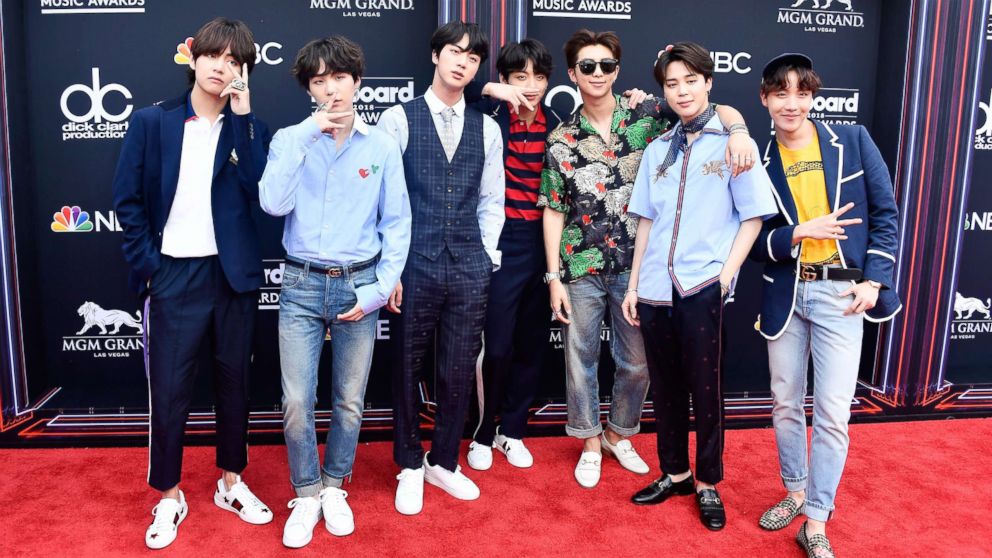 5. BTS have raised more than $1 million for UNICEF

On Monday, BTS spoke at the United Nations headquarters in New York becoming the first K-pop act to do so. In partnership with the Korean Committee for the United Nations Children's Fund (UNICEF), BTS has committed to a two-year, anti-violence campaign known as Love Myself. The project sponsors UNICEF's #ENDviolence promotion that looks to protect young people from growing up with the fear of violence and uses BTS' message to help children and teens follow their dreams and find self-acceptance. 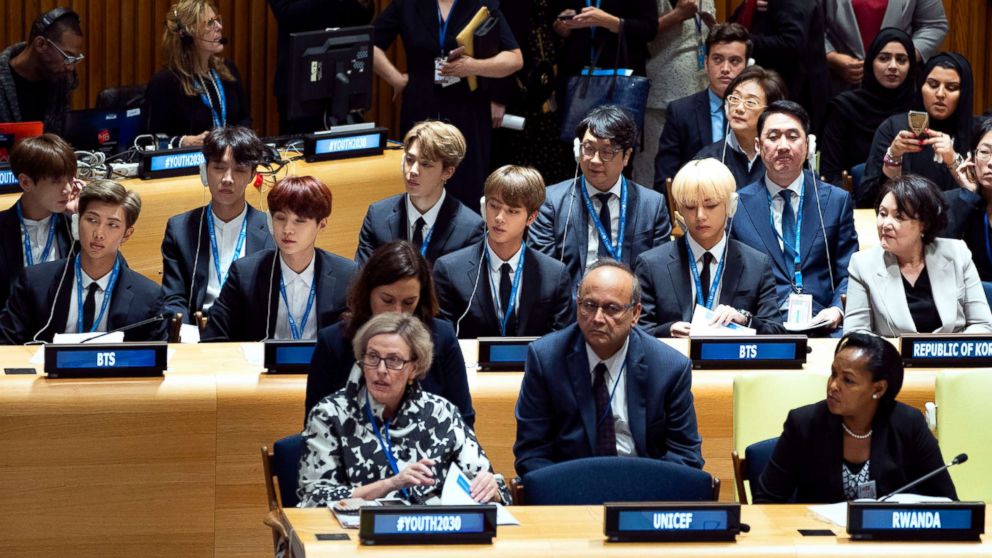 Craig Ruttle/AP
Members of the Korean K-Pop group BTS, center row, attend a meeting at the U.N. high level event regarding youth during the 73rd session of the United Nations General Assembly, at U.N. headquarters, Sept. 24, 2018.

In an emotional and personal speech, RM shared his journey to self-love through music and indicated that the next step in the Love Myself campaign was to speak your self-acceptance into the world.

"Let's all take one more step," he said at the end of his speech. "We have learned to love ourselves, so now I urge you to speak yourself. I'd like to ask all of you: What is your name? What excited you and makes your heart beat? Tell me your story, I want to hear your voice...find your voice by speaking yourself."

By the time BTS will address the U.N., the campaign will have already raised more than $1.03 million with the #BTSLoveMyself hashtag utilized more than 6.7 million times across social media. This has been achieved in part from donations from BigHit, a portion of BTS' physical album sales going to the cause, and donations from BTS' global fanbase, lovingly known as ARMY.