“The Change” by Kirsten Miller is our “GMA” Book Club pick for May.

There’s Nessa James, a mother of twin daughters, whose husband dies. When her daughters leave for college, she’s left alone in her home near the ocean. It doesn’t take long until Nessa begins to hear voices, which are the dead calling calling out to her -- a gift, which she’s inherited from her grandmother, that comes with special responsibilities. 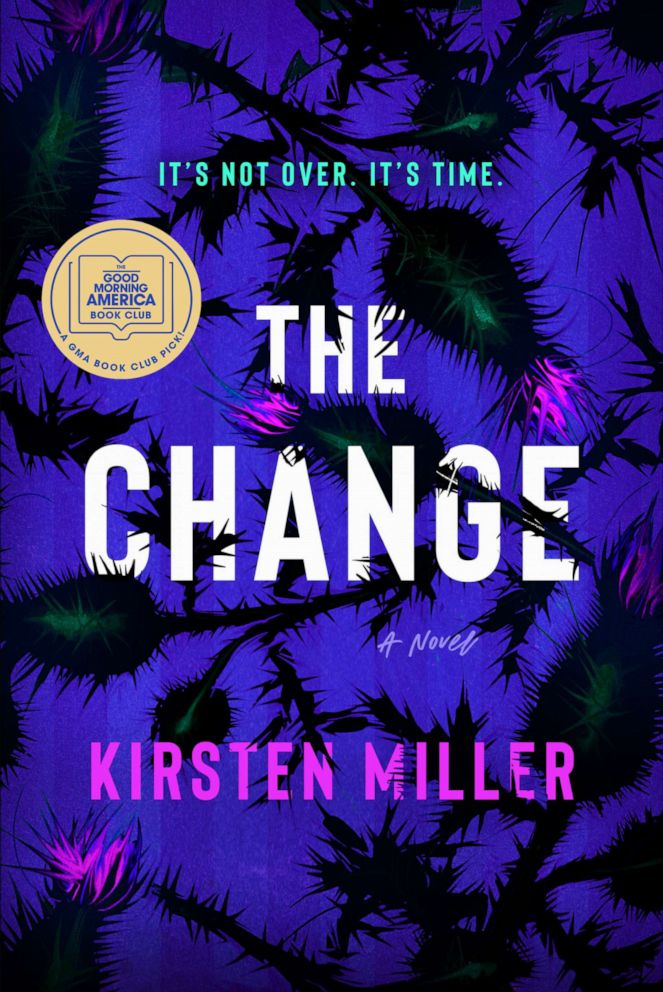 Then there’s Harriett Osborne, a 50-year-old woman who has just witnessed the implosion of her career and her marriage. She hasn’t left the house in months, but her life isn’t over. In fact, she’s undergone a stunning and welcome metamorphosis.

Finally, Miller introduces us to Jo Levison, who has spent 30 years at war with her body. Just when she’s beginning to feel like her body has had enough, she’s able to figure out that she has the ability to channel those body issues into her power.

Guided by the voices only Nessa can hear, the trio of women discover the body of a teenage girl abandoned beside a remote beach. The police have written the victim off as a drug-addicted sex worker, but the women refuse to accept the official narrative. 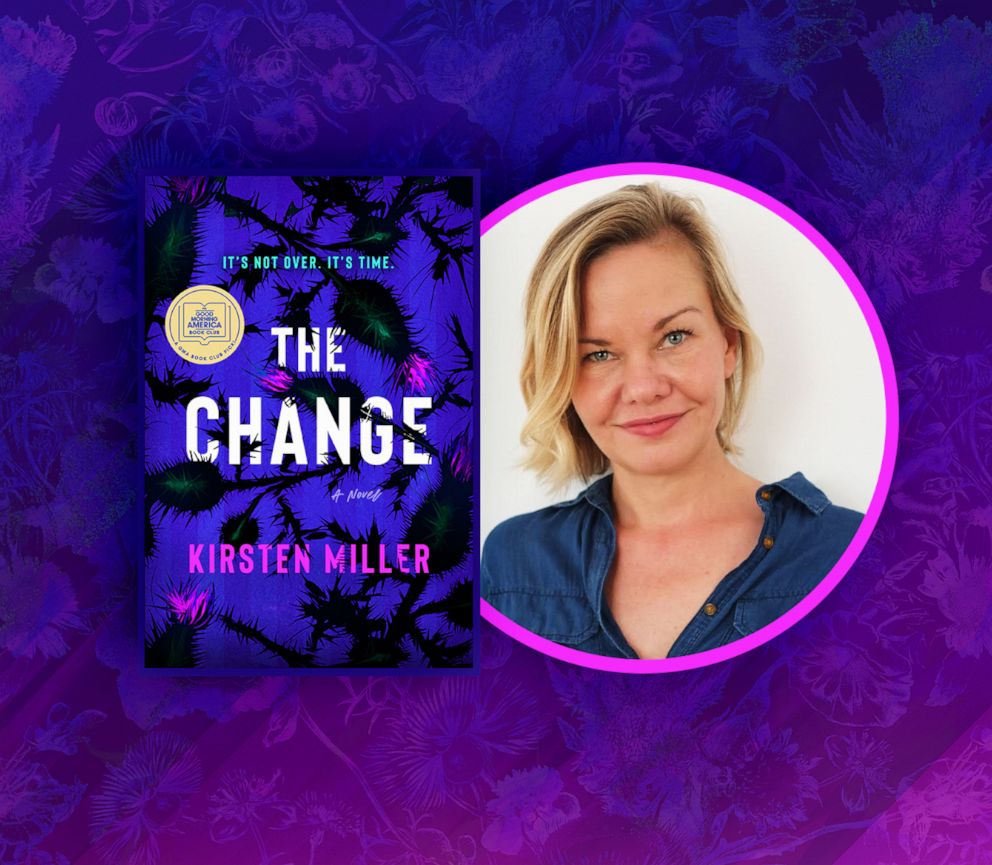 “I like to think of it as a feel good feminist revenge fantasy with witches!” Miller told “GMA.” “It follows three women who have reached a certain age and discover they’ve developed some unexpected powers.”

'The Change' by Kirsten Miller

MORE: Angie Thomas, author of 'The Hate U Give,' shares book picks for Independent Bookstore Day

Nessa’s destination appeared on a slight rise ahead of her. The moon hovered just above the jungle that had overtaken the infamous Osborne home. Leaves of every size and description glowed with its silvery light. A dense border of brambles repelled all intruders and shielded the garden from prying eyes. Nessa walked toward the property line and stopped at the thorny barricade. For the life of her, she couldn’t seem to find a way through.

“Hello,” said a woman from somewhere on the other side of the brambles. “Are you here to see me?”

“No, not at all,” the woman assured her, as if nothing were out of the ordinary. Her voice made Nessa think of rich dirt and golden honey. “I’m just doing a bit of gardening.”

“Some plants prefer moonlight. Some people do, too.”

It made perfect sense to her. “My grandmother was like that,” Nessa said. “She never did own a flashlight.” When lightbulbs in her house would burn out, she wouldn’t bother to replace them for weeks at a time.

“And you? You don’t strike me as someone who’s afraid of the dark.” Harriett sounded as if she might be grinning.

“Nor have I. Would you like me to show you my garden?”

“Yes, please.” Nessa felt a rush of childlike excitement, as though she’d been invited to tour a magical world.

“Then come on through. Just step over the brambles. I know they look bloodthirsty, but I swear they won’t bite.”

Since the night she and her grandmother had found the dead woman, Nessa had always felt the cool calm of the graveyard. When she’d encountered Jo, she had been drawn to her warmth. Together, they balanced each other out. This woman was different—far more powerful and less controlled. She pulled Nessa toward her, and though Nessa was neither scared nor reluctant, she also knew there was no point in resisting. Some forces in life are so strong that the only thing you can do is submit.

As Nessa passed through the briars, not a single thorn scratched her, and when she emerged on the other side, she knew she’d found someone she’d needed to meet. Harriett was tall, her hair woven through with silvery strands that caught the moonlight. Despite the chill in the air, she’d removed her clothes. She stood naked before Nessa, her skin sprinkled with the soil of her garden. Magnificent flora sprouted from the earth all around her. Burdock, poppies, henbane, angel’s trumpet. Hanging from her arm was a basket filled with pale gray fungi that resembled the delicate hands of young girls.

“I’ve never seen mushrooms like those before,” Nessa said, figuring it wouldn’t be proper to acknowledge the woman’s nudity.

Harriett glanced down at them. “No, I suspect not,” she replied. “They aren’t native to this part of the world.”

“What are you going to do with them? They’re poisonous, I’d imagine.”

Harriett picked one up by the stem and twirled it between her fingers. “It depends how you define poisonous. There’s a very fine line between what cures and what kills. Come,” she said. “I don’t have many visitors. This will be fun for me. Let me show you around.”

Harriett led Nessa along a path that wound through the garden. Raised beds radiated in a spiral around a giant mound in the center of what had once been the lawn. Nessa wondered if it might be some sort of ritual altar.

“That’s where I perform the human sacrifices,” Harriett said, as though she’d been reading Nessa’s mind.

“Kidding,” she said. “It’s a compost pile. Here in my garden, looks are deceiving. You must judge what you see with something other than your eyes.” She stopped by a patch of unimpressive waist-high weeds with toothed leaves. “These, for example, are stinging nettles. The leaves and stems are bristling with thousands of microscopic needles. When you brush against them, they deliver chemicals that cause a painful rash. Yet nettles are one of the most medicinally useful plants in the world. You can use them to treat everything from arthritis to diabetes.” She moved on to a shrub from which plump orange fruit dripped like teardrops. “This is an iboga plant from West Africa. Its extracts are used in other parts of the world to treat opioid addition. They’re illegal here in the United States.” Last, she pointed to a regal plant on the other side of the path, the top of its tall stem crowded with delicate purple flowers. “And that is a species of aconite, also known as monkshood or wolfsbane. Every part of it is highly toxic. Touching it will turn your fingers numb. Eat even the smallest bit, and you’ll suffocate on your own vomit. Growing beside it is holy basil, which has been used as a medicine for two millennia.”

Nessa looked around. There had to be thousands of different species planted in Harriett’s garden. “What do you plan to do with all of this?” she asked.

Harriett pondered the question as though it had never occurred to her. “Make things for those who have need of them, I suppose.”

“Or use them to punish men like Brendon Baker?” Nessa asked.

Harriett’s smile spread across her face, revealing a rather large gap between her two front teeth. “Perhaps,” she said.

“He deserved what he got. He’s not a good man.”

Harriett shrugged. “Good, bad—they’re mostly meaningless concepts. Baker is a pest,” she said. “I should have done worse. I guess I always still could.”

Nessa sensed the opportunity to get to the reason for her visit. “I met a woman like you when I was little.”

“You don’t say?” Harriett’s smile gave nothing away. “What kind of woman would that be?” She seemed to be daring Nessa to call her a witch. Nessa knew she needed to choose her words carefully.

Excerpted from The Change by Kirsten Miller. Copyright © Kirsten Miller 2022. Reprinted with permission from William Morrow, a division of HarperCollins Publishers.