By Carson Blackwelder, Hayley FitzPatrick
Video by Brittany Berkowitz
Share —
Sign up for our newsletters to get GMA delivered to your inbox every morning!

"Dancing with the Stars" season 31 premieres Sept. 19 on Disney+, and "Good Morning America" is exclusively revealing which celebrities will compete for the coveted Mirrorball trophy.

The full list of stars was announced Thursday on "GMA."

Check out the full list of celebrities competing on "DWTS" season 31 below.

Charli D'Amelio is a social media personality best known for her dance videos on TikTok, where she has amassed more than 146 million followers as the second most-followed person on the platform.

Charli, 18, said she "can't be too hard" on her mom, who will be competing as well, but still hopes to beat her. 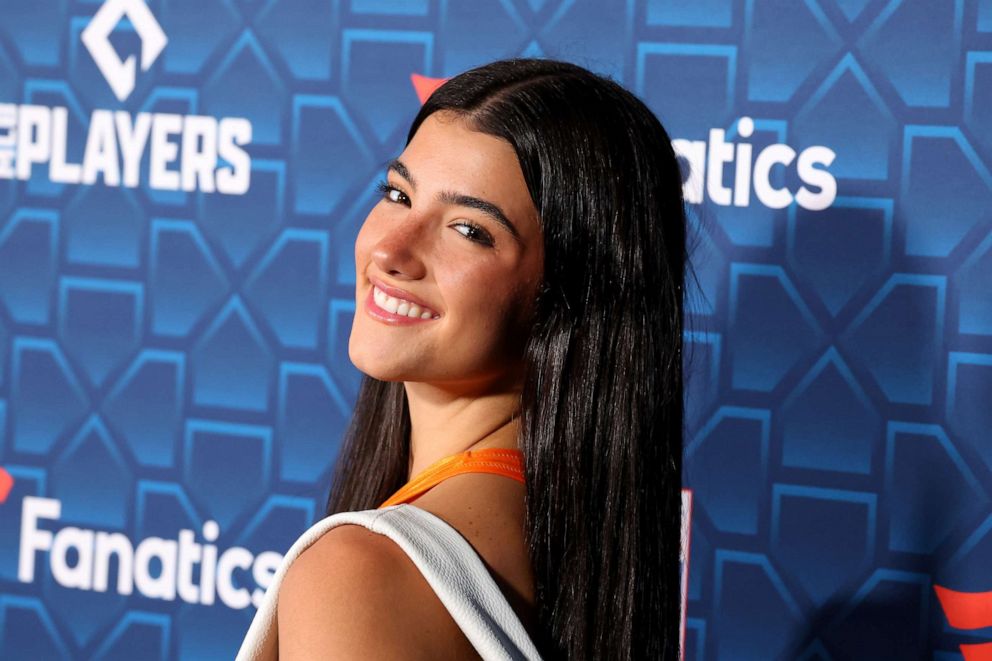 Heidi D'Amelio is best known as the mother of TikTok creators Charlie and Dixie D'Amelio. Heidi and the entire D'Amelio family are the stars of "The D'Amelio Show," which returns to Hulu for season 2 on Sept. 28.

Heidi, 50, is a former competition dancer like her daughter, but cautioned, "But that was a long time ago. It's 30 years since I've danced." 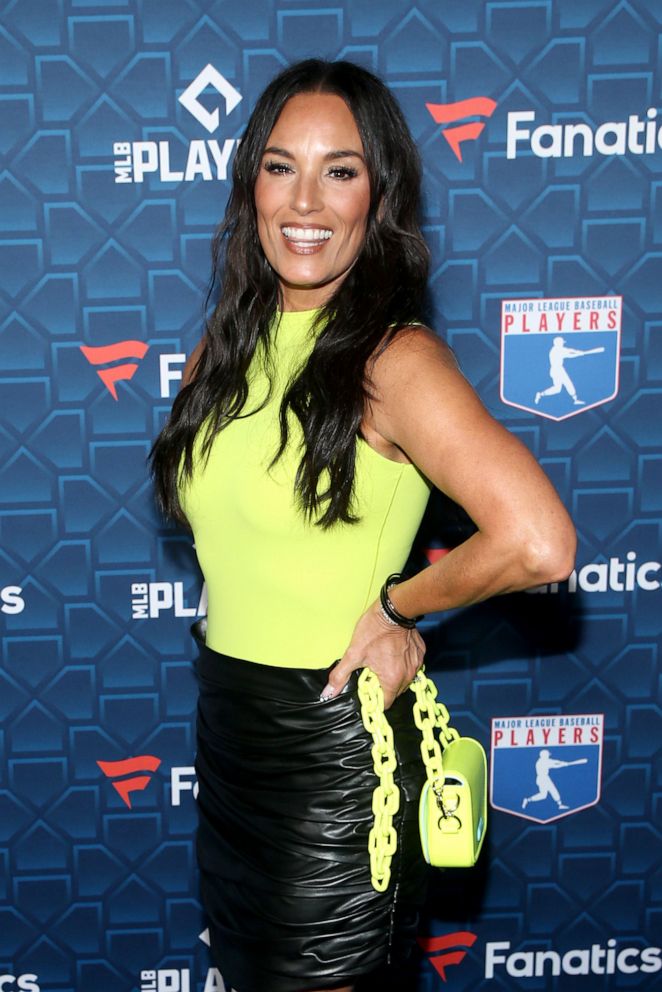 Sam Champion is an Emmy- and Peabody award-winning weather anchor for the ABC flagship station WABC-TV and "Good Morning America."

Champion, 61, said he hopes his weather moves will serve him well, joking that those are all the moves he has. "This is going to be one of the best seasons ever," he said. "I'm just happy to be here for maybe a week or two weeks before they realize I shouldn't be here." 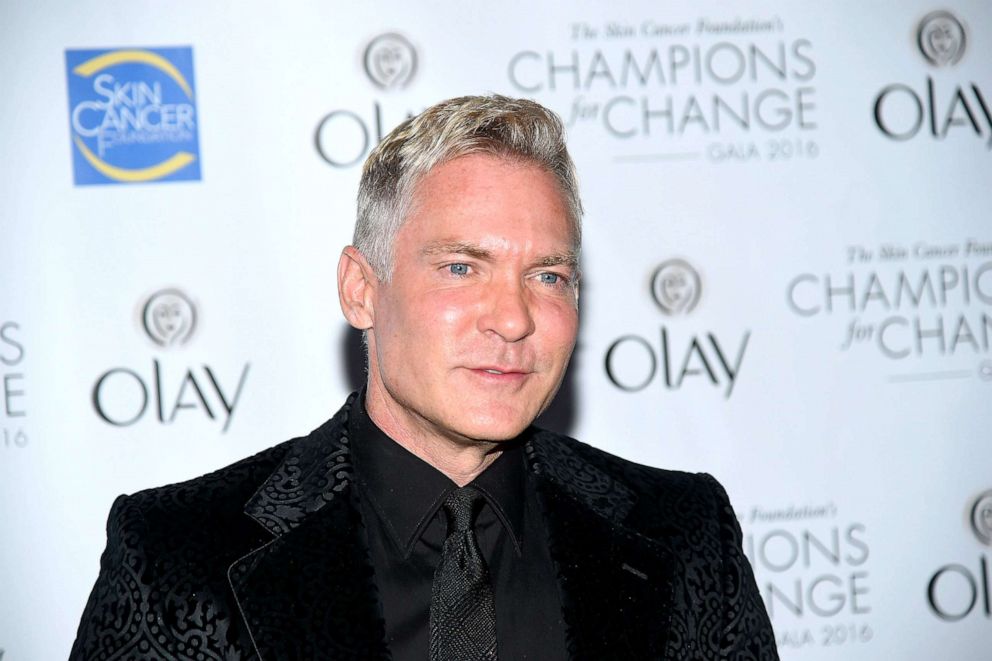 Jordin Sparks is the winner of "American Idol" season 6 and is known for songs such as "Tattoo," "Battlefield" and "No Air," the latter of which earned her a Grammy nomination. She has appeared on Broadway, in "In the Heights," and in films, such as 2012's "Sparkle." Sparks is married to husband Dana Isaiah and is mom to a 4-year-old son.

Having been on a reality competition show before, Sparks said she thinks it gives her a little bit of an advantage that she knows about live performances and is used to critique from the judges.

Still, the 32-year-old said she has mixed emotions heading into "DWTS." 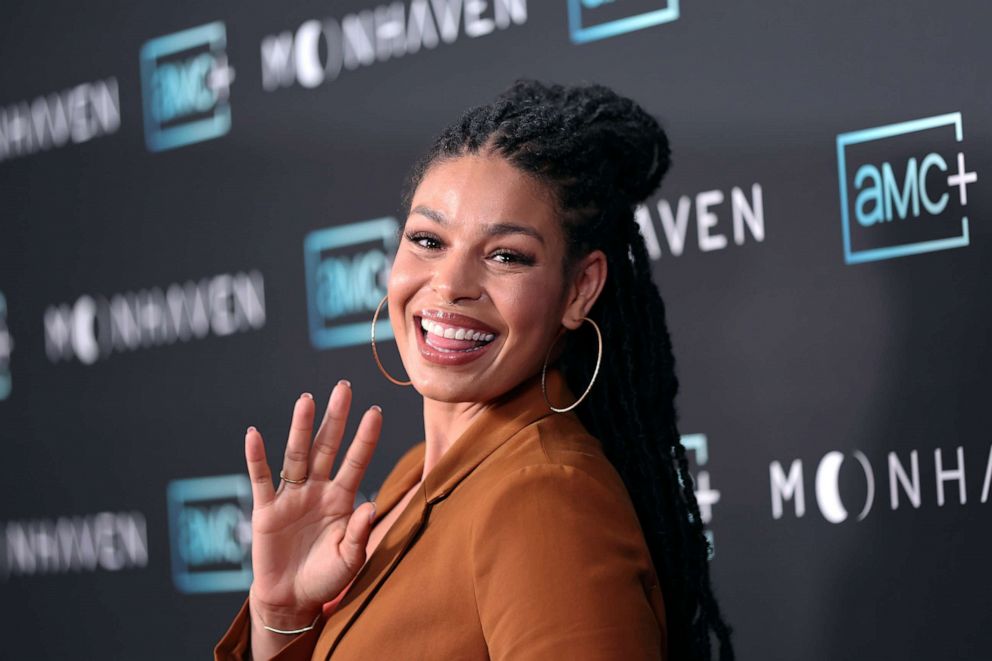 Daniel Durant is a deaf actor who first made waves on the Freeform series "Switched at Birth" and later wowed audiences in the 2015 Broadway revival of "Spring Awakening." In 2022, he and the cast of "CODA" won the top prize at the Screen Actors Guild Awards. The film went on to win the Academy Award for best picture.

"I love the stage, so I feel at home and I really am ready, but it's new, the dancing part," Durant, 32, said. "It's so weird, I've been on Broadway and done choreography, but you're not dancing with a partner."

Durant also got a message from "DWTS" alum Marlee Matlin, his "CODA" co-star, who told him, "Daniel, I'm so proud of you being on 'Dancing with the Stars.' You have my support 100 percent. Everyone else is going to support you too. Stand hard, dance hard and you're gonna have a lot of fun. And make sure to tell the judges and the audience when they vote for you, tell them to 'read my hips.' Good luck. I love you." 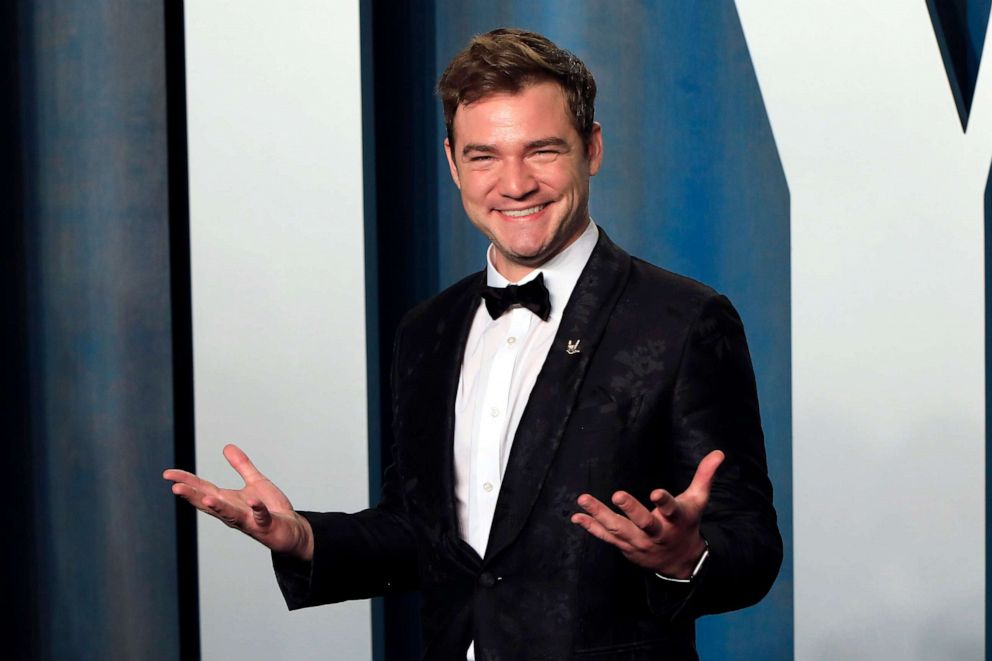 Joseph Baena, the son of Arnold Schwarzenegger, is an aspiring actor and a bodybuilder. He frequently posts about fitness and wellness to his nearly 400,000 followers on Instagram. He currently works in real estate but has a few films on the way.

Baena said he's not sure his dad, who famously showed off his tango skills in the film "True Lies," passed down any dance moves.

"You know, it's funny, I think that's probably the most I've ever seen my dad dance," the 24-year-old said, "So I hope that a little more is going to come on the Latin side of my family, so we'll see." 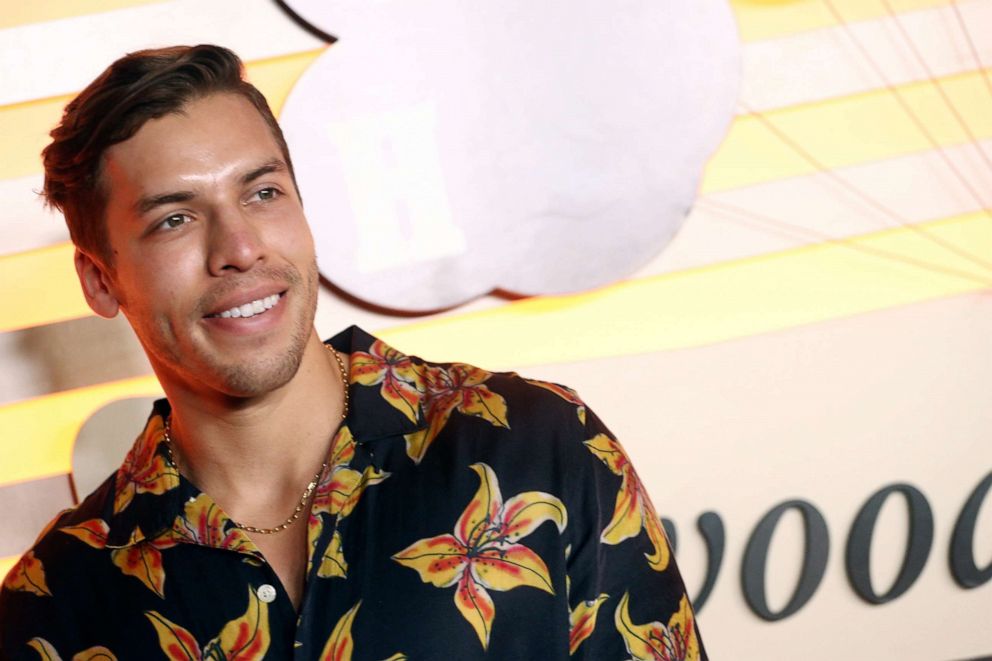 Jessie James Decker is a singer-songwriter, fashion designer, entrepreneur and former reality TV star. She and her husband, retired NFL star Eric Decker, starred on their E! reality series "Eric & Jessie" from 2013 to 2017. She founded the popular women's apparel and swimwear brand Kittenish in 2014. Decker is a two-time best-selling author.

Decker, who said her three kids are "very excited" for her, said fans will have wait to see if her moves as a country singer help her out in this competition.

"Listen, I perform and I entertain on stage, but I have never had professional dance lessons, so I have no idea what to expect," the 34-year-old said. "I just keep getting nervous I'll forget the steps, mom brain and all, but, I mean, I'm hoping for the best." 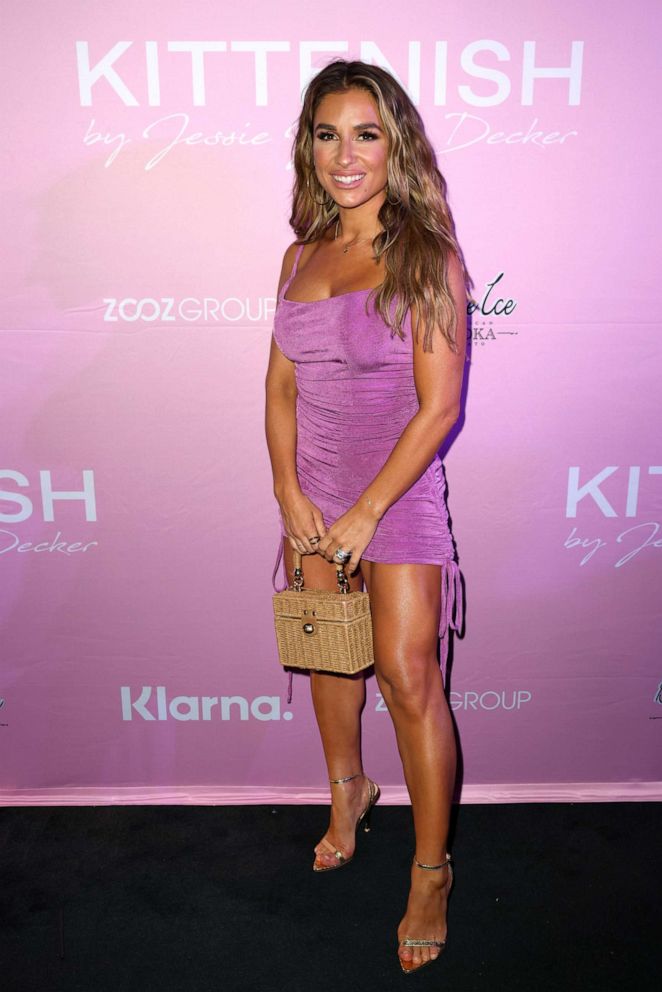 Windey said she hopes her experience on "The Bachelorette" will translate to "DWTS" because she views both shows as "confidence builders" and ways of helping people find themselves. 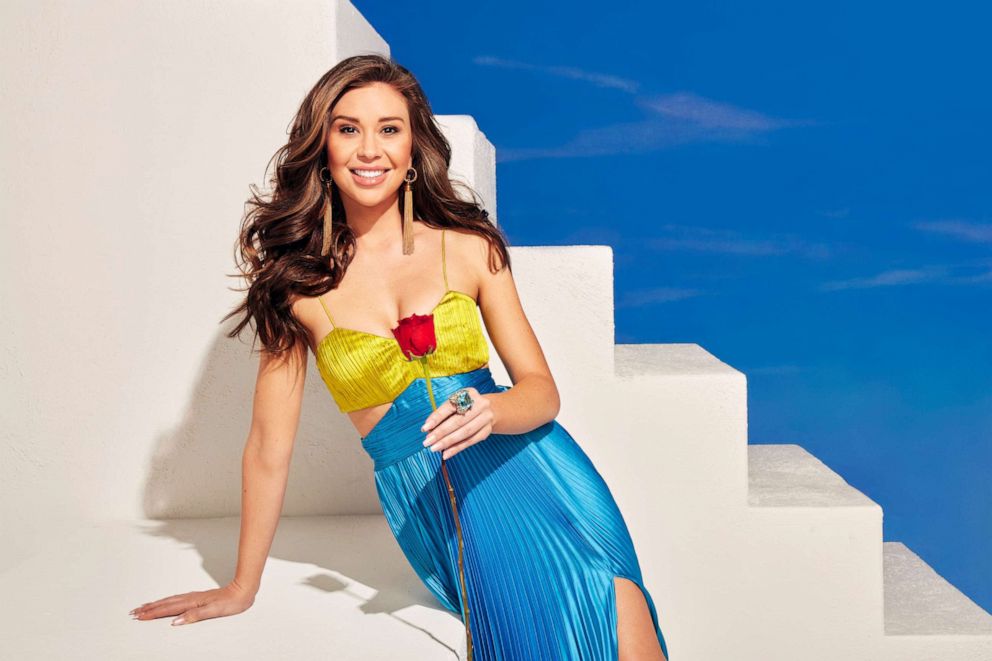 Jason Lewis is an actor and model best known for his role as Smith Jerrod on "Sex and the City." He made his debut as Smith, the love interest of Kim Cattrall's Samantha Jones, on the HBO series in 2003, during the show's sixth season. He starred in both feature films based on the TV series.

Lewis, 51, said he had "zero dance skills before this" but he's "having a good time" so far. "It's incredibly challenging," he said. "I've done a week of rehearsals so far and it's been wonderful because everybody has been super inviting and supportive." 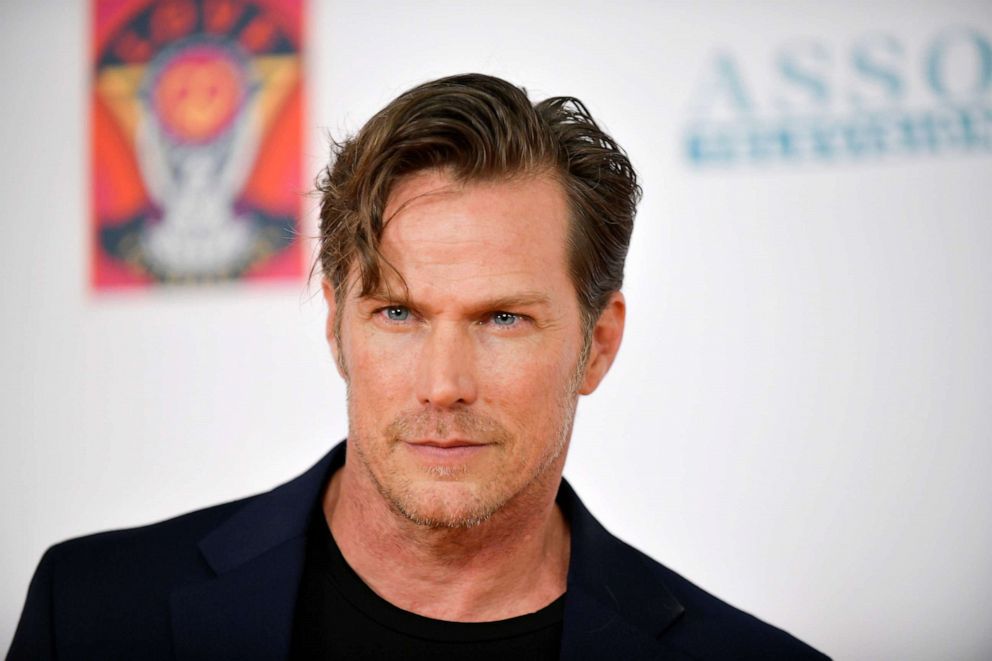 Trevor Donovan is an actor best known for his role as Teddy Montgomery in "90210." He appeared on the CW show from 2009 to 2013. He also appeared in the TV series "Melissa & Joey" and "The Baxters" and has starred in several Hallmark TV movies.

Donovan, 43, said he's going to try to use his leading man skills to help give him the winning edge. "I like to think I have a little experience in the area of romance," he said. "When I'm on the dance floor I feel like I'm standing on a different planet. I'm going to try to bring the two together, but I can't promise anything." 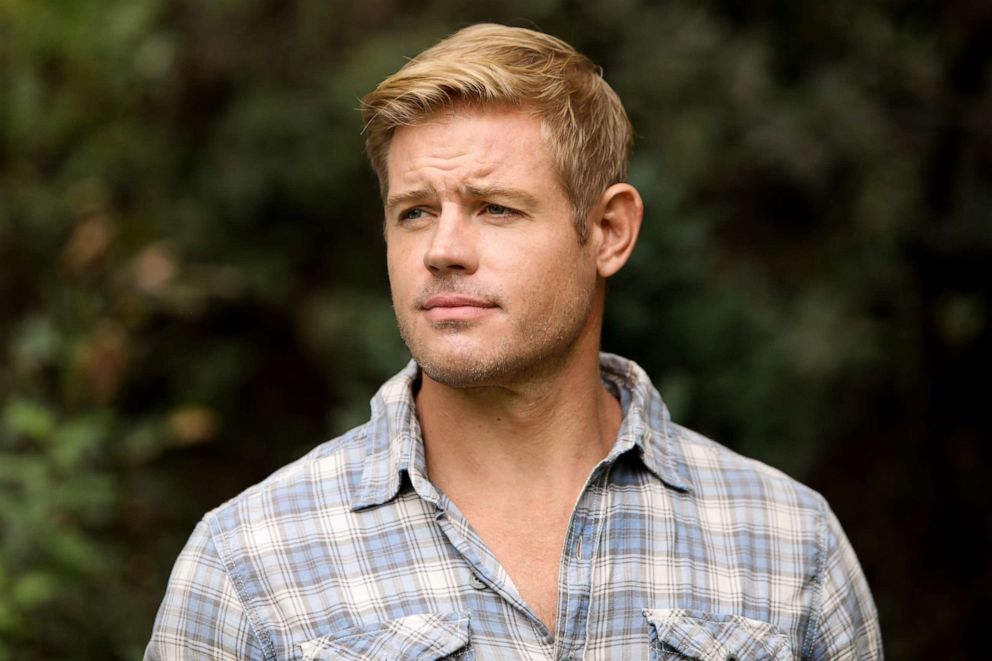 Shangela (born D.J. Pierce) is a drag performer best known for appearing on "RuPaul's Drag Race" seasons 2 and 3 and "RuPaul's Drag Race All Stars" season 3. Shangela also appeared in the Oscar-winning, Lady Gaga-starring 2018 film "A Star Is Born" and is currently co-host of the HBO reality series "We're Here."

Shangela, 40, "wants to show up for the moment" and to "show up for everyone who ever felt like they were on the outskirts, that didn't feel seen." 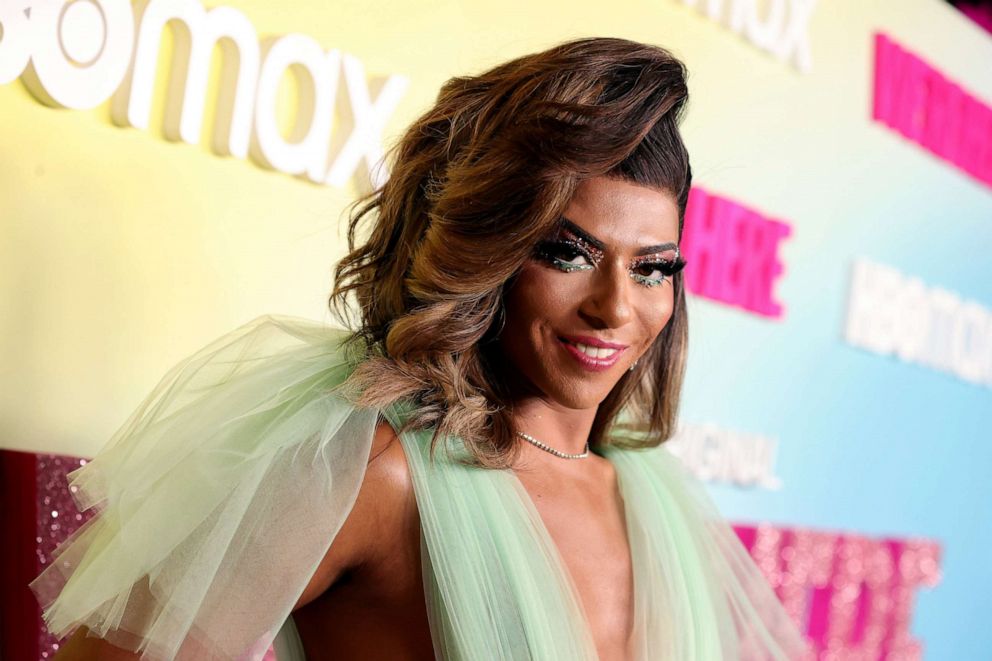 Wayne Brady is a comedian, Emmy Award-winning actor, Grammy-nominated singer and television personality best known for starring on "Whose Line Is It Anyway?" He hosted his own talk show, "The Wayne Brady Show," from 2001 until 2004, and is the current host on the game show "Let's Make A Deal."

MORE: Wayne Brady dedicates 'Dancing with the Stars' season 31 to his late grandmother

Despite being a comedian, Brady, 50, said he hopes he won't have to lean on his improvising skills, explaining, "You're not supposed to because it's dancing and it's choreographed, and so hopefully I won't have to use any improvisation and pull anything out because I'll be doing what's asked of me." 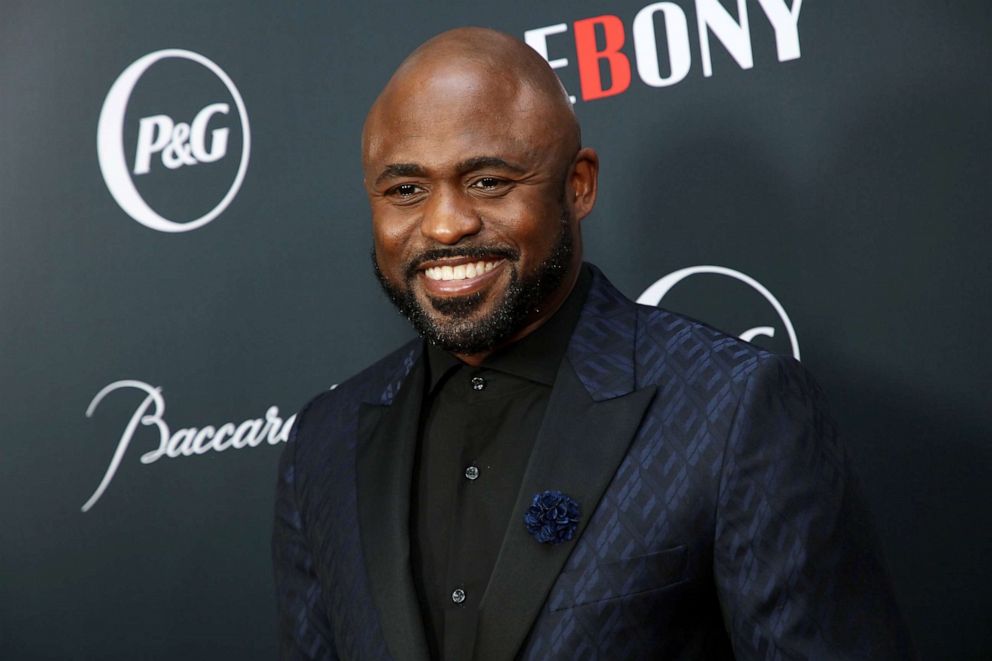 Cheryl Ladd is an actress best known for her role as Kris Munroe in the classic ABC series "Charlie's Angels," replacing Farrah Fawcett in the show’s second season as one of the three leads alongside Jaclyn Smith and Kate Jackson. Ladd has one daughter, Jordan Ladd, and has been married to husband Brian Russell since 1981. She has one stepdaughter, Lindsay Russell.

Ladd said she has been asked "several times" before to do the show but "now is the time." 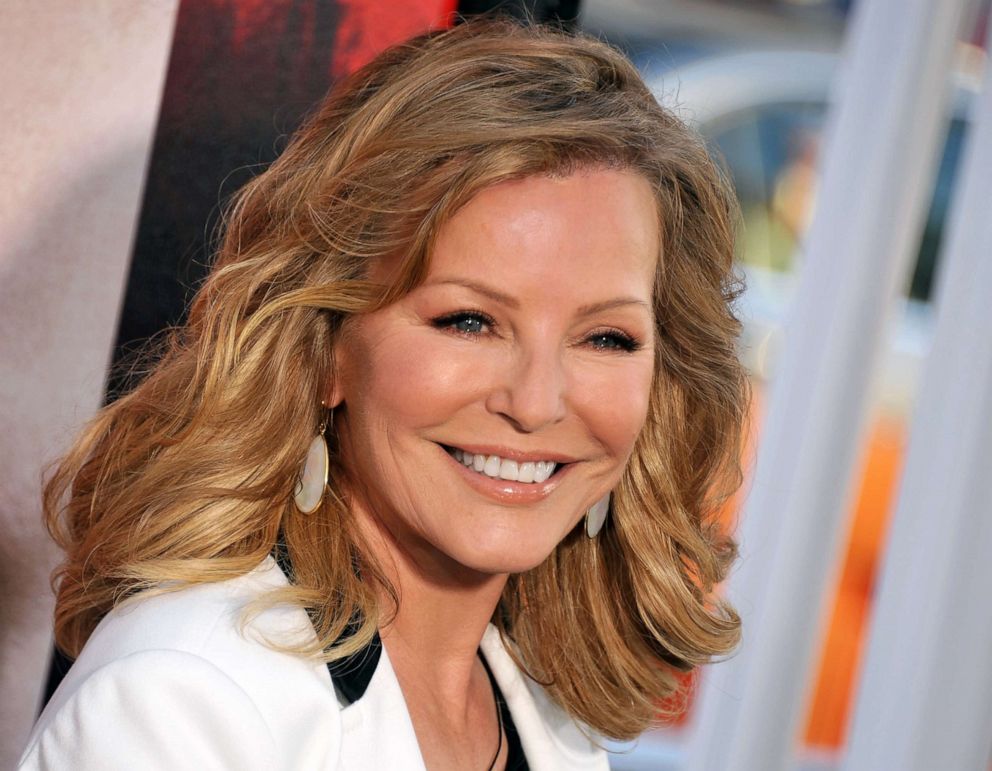 Vinny Guadagnino is a television personality who rose to fame as a cast member on MTV's "Jersey Shore." He appeared on the famous reality TV series, which ran from 2009 to 2012 and was filmed in Seaside Heights, New Jersey, for all six of its seasons, as well as its spin-off, "Jersey Shore Family Vacation."

"I don't know how fist pumping and ballroom goes together, but I'm gonna make it work," Guadagnino said.

The 34-year-old self-proclaimed "mama's boy" said his mom will "come to the show and make chicken cutlets and pasta for everybody" because they need some "real, home-cooked food" before they dance. 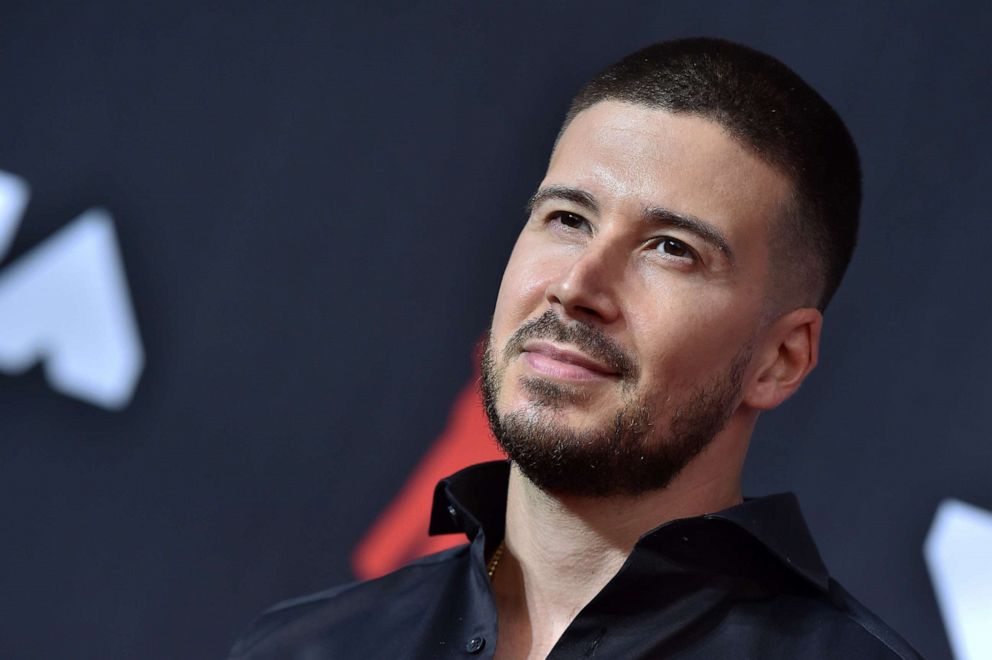 Teresa Giudice is a television personality, best-selling author and podcast host who rose to fame on "The Real Housewives of New Jersey." She has appeared on the Bravo reality TV show for 13 years, since its premiere in 2009. In 2015, Giudice served less than 12 months of a 15-month sentence after pleading guilty to multiple fraud charges.

Giudice, 50, said her youngest daughter gave her some advice, telling her not to be scared, to have fun, to feel her partner's energy and to give it her all. "I love watching her on stage and shine so I hope I do the same for her," the reality star said. 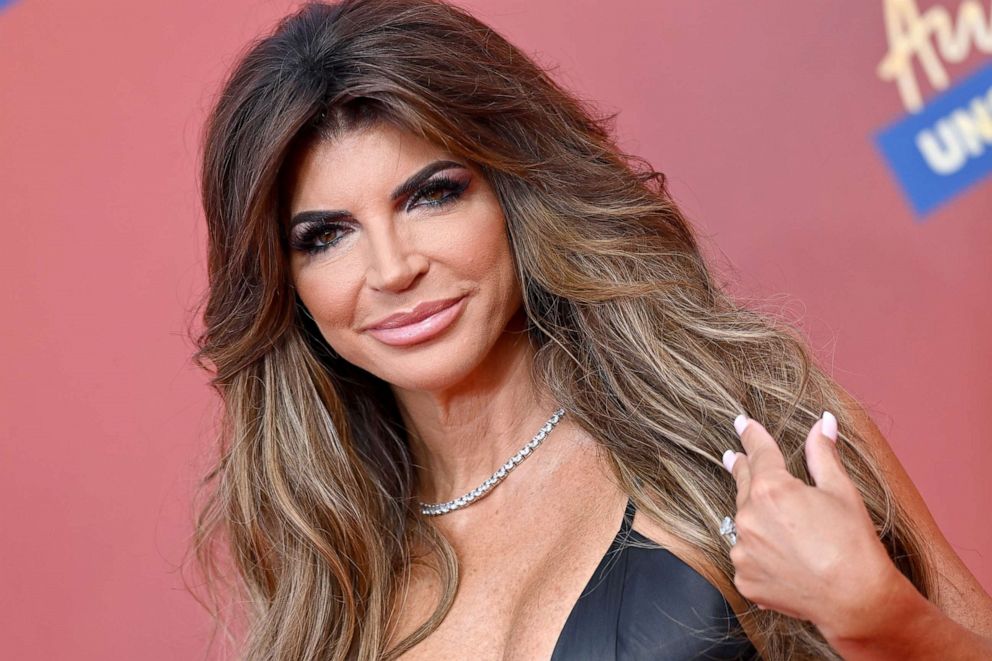 Selma Blair is an actress best known for films like "Cruel Intentions," "Legally Blonde" and the "Hellboy" movies as well as portraying Kris Jenner in the first season of "American Crime Story." She was diagnosed with multiple sclerosis in 2018, writing about her experiences in her best-selling memoir "Mean Baby." As of 2021, Blair, who has an 11-year-old son named Arthur Saint, is in remission from MS.

Blair, 50, called this a "full circle" moment, adding, "I'm beyond thrilled. I'm [here] with perspective and coming back and realizing the support of people when you try, it's changed my life. This is so powerful to me."

"I'm feeling good and I'm really happy ... to really do things that are pushing stamina and being visible," she continued. "I'm grabbing at every joy we have in life."

Blair said her son is "a little worried that I'm going to fall on my tuchus," but said she is confident he'll "be proud how much happiness I can find in this." 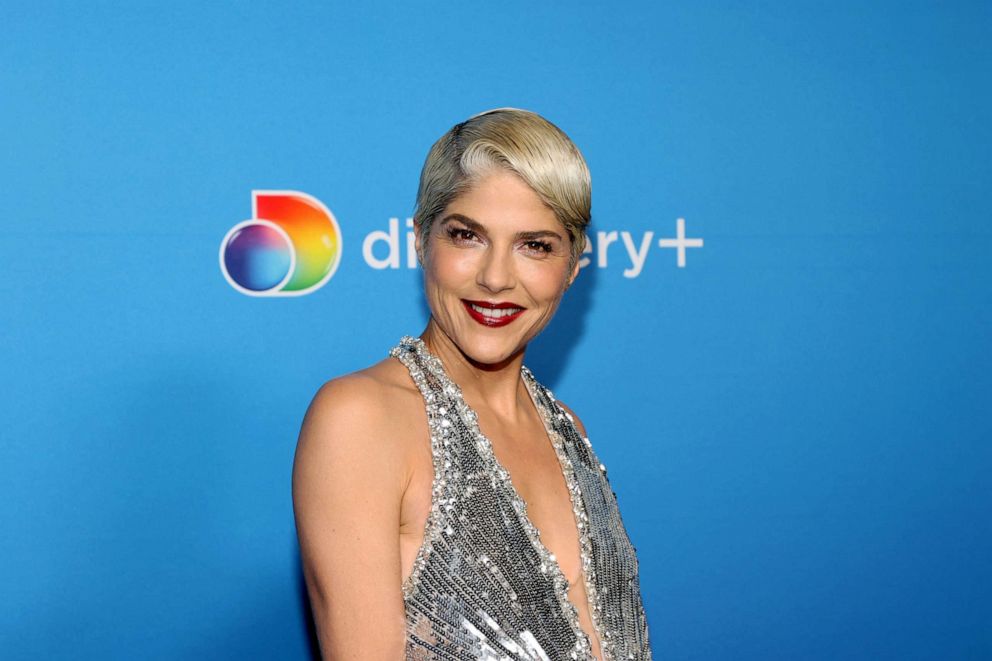 "Dancing with the Stars" season 31 premieres Sept. 19 on Disney+.