For Pride Month, "Good Morning America" spoke with author Torrey Peters about her favorite books that celebrate queer culture in all of its triumphs, challenges, joy, love and authenticity.

Peters' debut novel and national bestseller "Detransition, Baby" took the world by storm when it first hit shelves in January 2021, turning the spotlight on the transgender community in a way not seen before in mainstream literature.

"Detransition, Baby" follows three women who are transgender and cisgender, or non-transgender. Their lives collide after an unexpected pregnancy forces them to confront their deepest desires. Peters' book was named "one of the best books of 2021" and was longlisted for The Women's Prize.

In her list of books to pick up for Pride Month, Peters shared titles that not only impacted her life, identity and writing, but that she believed would resonate with all "GMA" readers.

"I wanted books where people would see something they never had before, or books that had something new to say," Peters told "GMA."

"There are stories like mine that I think the cisgender audience can relate to," she added. "There's a lot that cis and trans women have to say to each other. We're all dealt blows, and we move on with tenacity and ferocity, and I wanted to speak to everyone. We all go through transitions, whether it's divorce, or any number of things, and the way we talk right now is very 'stay in your lane,' but I'm interested in the ways we can speak across differences through analogy."

Read below to see each of her book recommendations to celebrate Pride Month. 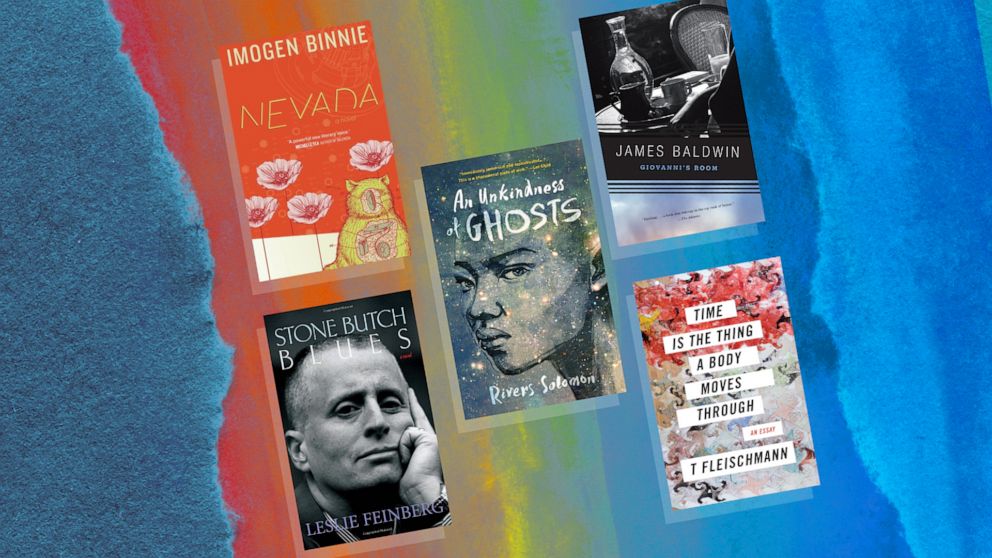 This is the book that launched the trans writing scene in Brooklyn that changed my own life. The scene had a basic premise: trans women writing for other trans women. It seems simple, but it had revolutionary effects, similar to Toni Morrison's famous declaration that she "writes for Black women." When we trans women wrote for each other, we never had to stop to explain our transness. It was full-out story all the time -- and it turned out, everyone else could keep up. Meanwhile, the bar was higher -- it's more difficult to impress other trans women about trans issues, to tell stories they haven't heard or even experienced. "Nevada" -- the story of a trans woman on a road trip -- was the book that taught us how to do this, and it remains an original.

If "Nevada" was an original for a certain scene of trans writing, "Stone Butch Blues" is an original in literature, no qualifications. The book tells the story of Jess Goldberg, a baby butch who grows into a new masculine identity, defying the terrible institutional violence of pre-Stonewall America. Along the way, readers are immersed in the vibrant queer subcultures of the era -- drag queens, gay men, lesbians, trans identities, bars, clothes, resistance to police brutality -- basically, the elements that still define much of queer politics. It's a heartbreaking story, and after 30 years, a classic.

'An Unkindness of Ghosts' by Rivers Solomon

Not all queer lit is realism! On a spaceship shuttling refugees to a purported "Promised Land" after a planetary catastrophe, the ship's ruling class recreates the logic of a plantation. Down on the lower decks, Aster, an ambiguously gendered and dark-skinned orphan, plots to uncover the disturbing truth of the regime. Solomon is, to my mind, one of the most exciting queer writers of this generation: taking on race, gender, colonialism, environmental collapse, sex and love in gorgeous sci/fi and speculative fiction. Soloman's third book, "Sorrowland," was published in May 2021.

I waited years to read this book, resisting it, feeling sure that any book about queerness published in 1965 would strike me as antiquated, hoary and no longer relevant. How wrong I was. This book is more uncompromising, more passionate, more unflinching than almost anything that has been published since. The treatment of internalized shame, of betrayal and of love tore me apart -- I felt flayed and grateful at the end. If you're like me and kept putting this book off … don't make my mistake, this is your summer.

'Time is the Thing a Body Moves Through' by T Fleischmann

Often compared to Maggie Nelson, I personally think of T Fleischmann as working in the tradition of the prose magicians W.G. Sebald or Ben Lerner (imagine if those two were somehow non-binary and joyfully slutty). Fleischmann's nonfiction work is wide ranging, taking on the art of Felix Gonzalez Torres, the formation of ice, the Universal Friend and their own friends and lovers in the trans communities of New York, Chicago and the rural South. I'm of the belief that Fleischmann is, like many great writers, ahead of their time -- I will go so far as to bet that in 10 years, another generation of writers will be pointing to "Time" as one of the most formative books of our era.