Queen Elizabeth II hosted the dinner for King Willem-Alexander and Queen Máxima of the Netherlands. Prince Charles, the Prince of Wales and Camilla, the Duchess of Cornwall were also on hand for the banquet for 150 guests.

The mom of three stunned in a light blue Alexander McQueen gown, which happened to be a very similar hue to the dress her sister-in-law Meghan Markle donned last night at a state dinner in Fiji. 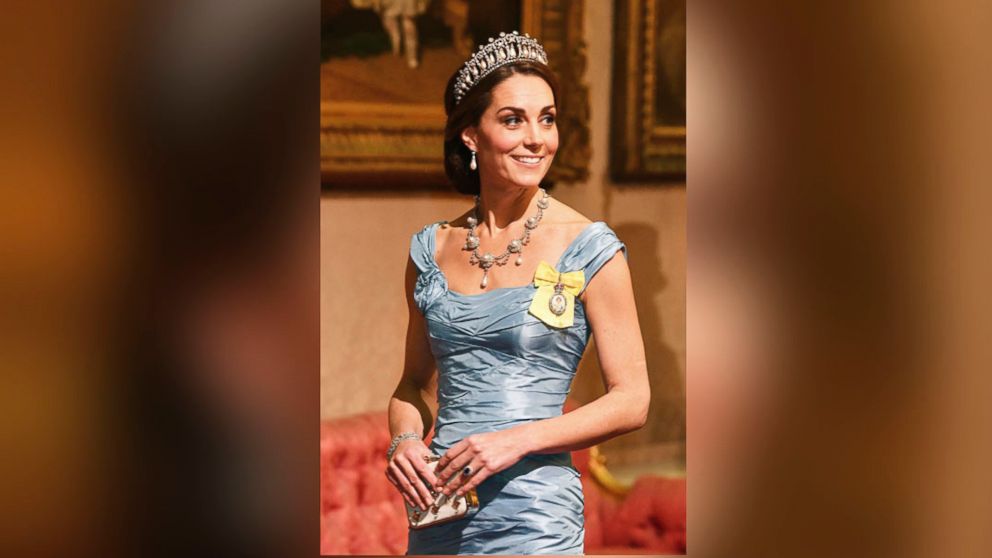 John Stillwell/PA via AP
Catherine the Duchess of Cambridge during the State visit by King Willem-Alexander and Queen Maxima of the Netherlands, at Buckingham Palace in London, Oct. 23, 2018.

Kate, 36, was accompanied by Prince William, 36, during tonight's lavish state dinner held in honor of King Willem-Alexander and Queen Maxima of the Netherlands.

The Duke and Duchess of Cambridge accompany State Visit guests, including Prime Minister Theresa May, to The Netherlands State Banquet held in the Ballroom at Buckingham Palace. pic.twitter.com/1aMGtemN0I

The Duchess of Cambridge also donned one of the late Princess Diana's most beloved tiara's -- the Cambridge Lover's Knot tiara -- which was created by Queen Elizabeth's grandmother, Queen Mary, in 1913, and was a gift to Diana on her wedding day.

Kate also wore Diana’s favorite Collingwood diamond and pearl drop earrings and a spectacular necklace borrowed from the Queen Elizabeth’s collection of pearls and diamonds. The necklace, which also features pearls and diamonds was a gift to Queen Alexandra from King Frederick if Denmark was passed down to the Queen’s mother and has been in the monarch’s extensive jewelry collection.

Queen Elizabeth accented her white gown with the Girls of Great Britain and Ireland tiara and the Cullinan III and IV brooch. Camilla, the Duchess of Cornwall wore the Greville tiara and a silver gown. 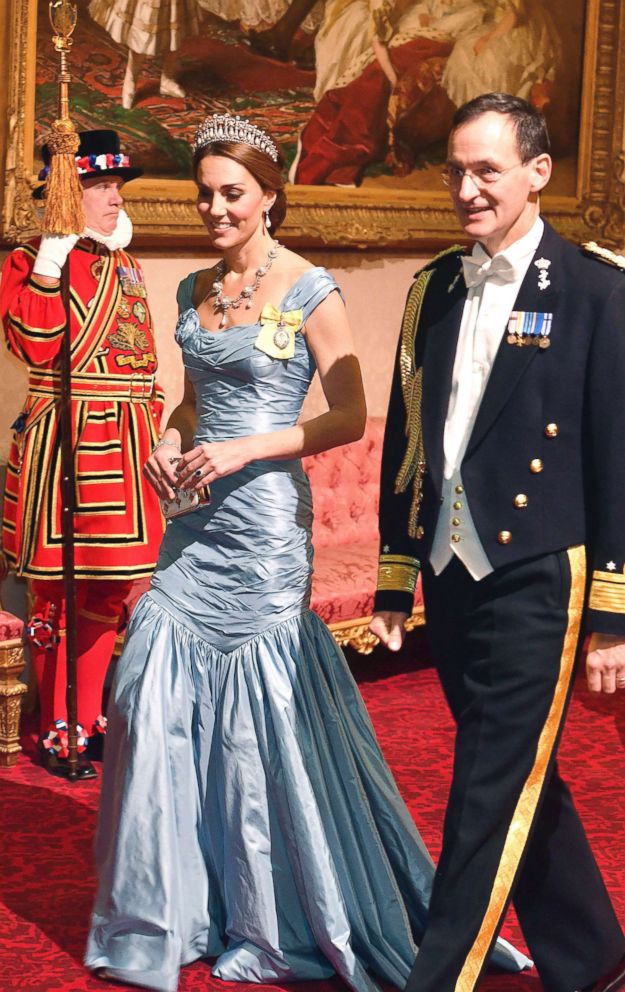 John Stillwell/PA via AP
Catherine the Duchess of Cambridge walks with Rear Admiral Ludger Brummelaar during the State visit by King Willem-Alexander and Queen Maxima of the Netherlands, at Buckingham Palace in London, Oct. 23, 2018.

The queen was called "the most fearless Bond girl ever -- with great panache," by the Dutch king, a reference to her appearance alongside Daniel Craig at the 2012 London Olympics ad that featured her jumping out of a plane on video.