Prince Harry and Meghan Markle were welcomed to Fiji on their tour Down Under with a traditional welcome ceremony and a state dinner that drew comparisons to Queen Elizabeth and Prince Philip’s visit more than 50 years ago.

Harry, 34, and Meghan, 37, the Duke and Duchess of Sussex, were greeted by top Fiji officials after a nearly four-hour charter flight from Australia.

Meghan, who is pregnant with the couple’s first child, wore a cream dress by Australian label Zimmerman and a Stephen Jones hat.

Meghan paired the look with earrings given to her by Queen Elizabeth during their first joint engagement in Chester and a bracelet gifted to her by Prince Charles. 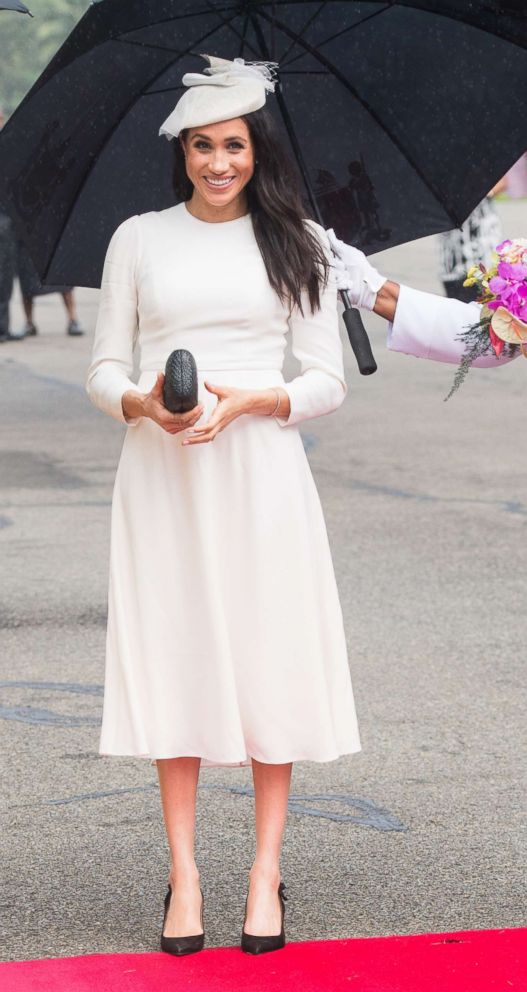 i-Images/Polaris
Meghan Markle, the Duchess of Sussex receive a Guard of Honour as they arrive at Nausori Airport in Suva, Fiji, Oct. 23, 2018.

???? The Duke of Sussex inspected a Guard of 100 Fijian soldiers, made up of representatives from the Army and Navy, on arrival in Fiji. #RoyalVisitFiji pic.twitter.com/3SHIS9MqbV

(MORE: Prince Harry reveals he hopes the royal baby is a girl)

Tens of thousands of Fijians lined the route from the airport in the rain, waving flags and cheering as they hoped to catch a glimpse of the newlyweds.

The couple, who wed in May, recreated some of Queen Elizabeth and Prince Philip's iconic moments in Fiji, including standing on their hotel balcony to greet Fijians. 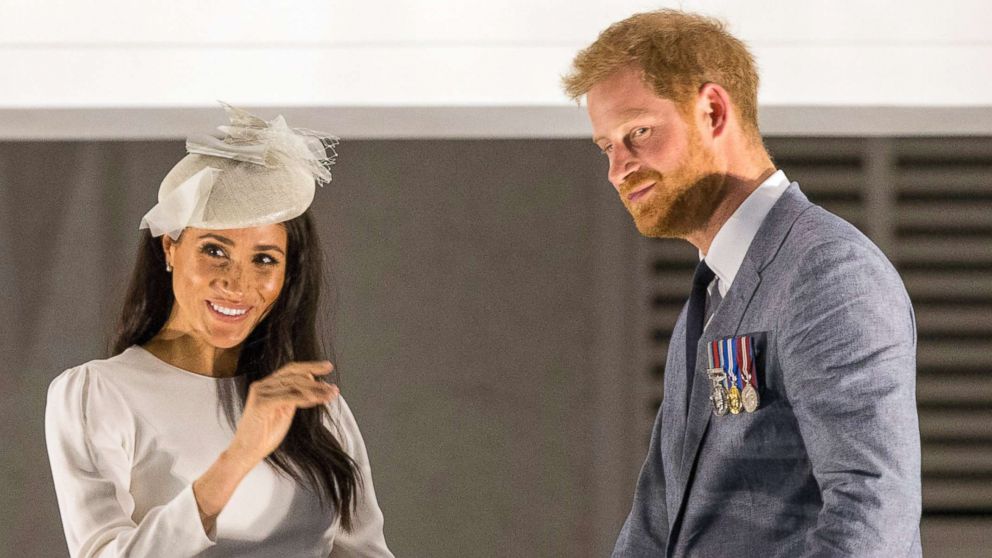 Robin Nunn/Nunn Syndication/Polaris
Prince Harry and Meghan Markle wave from the balcony of the Grand Pacific Hotel where they greeted the crowd who had turned out to welcome them in the rain, Oct. 23, 2018, in Suva, Fiji.

The Duke and Duchess of Sussex made the night for thousands of Fijians as they waved from the balcony of the historic Grand Pacific Hotel in Suva City. #Fiji #FijiNews pic.twitter.com/XXgQYMhkpL

Harry and Meghan were then guests of honor at a traditional Fiji welcome celebration that echoed an event attended by the queen and Duke of Edinburgh during their Commonwealth tour in 1953.

At Borron House, The Duke and Duchess of Sussex called on President Jioji Konrote and First Lady Faga Sarote, at the start of #RoyalVisitFiji. pic.twitter.com/IdhLNWR8EJ

???? In 1953 Queen Elizabeth II and The Duke of Edinburgh arrived in Fiji, as part of Her Majesty’s first Commonwealth tour as Queen.

Today The Duke and Duchess of Sussex will start #RoyalVisitFiji! Read about the visit here: https://t.co/p7h0DbMS4X

Harry was offered roast pig, a whale's tooth and kava, a traditional drink, as he was officially welcomed at Albert Park in Suva Fiji in front of an estimated crowd of 15,000.

The crowd maintained a reverential silence while the ceremony took place, with Harry and Meghan seated on a dais as a measure of respect.

The Duke and Duchess of Sussex joined a traditional welcome ceremony, known in Fijian as ‘Veiqaraqaravi Vakavanua’, and conducted by the people of Vuda — watched on by 15,000 people at Albert Park. #RoyalVisitFiji pic.twitter.com/8vHA6GW4sB

(MORE: These are the flats Meghan Markle has been wearing nearly every day in Australia)

"Bula venaka! The duchess and I look forward to meeting as many of you as possible during the next two days and celebrating the links and close friendship between Fiji and the United Kingdom,” Harry said in brief remarks to the crowd.

After the ceremony, Meghan and Harry changed into formal wear for a state dinner. 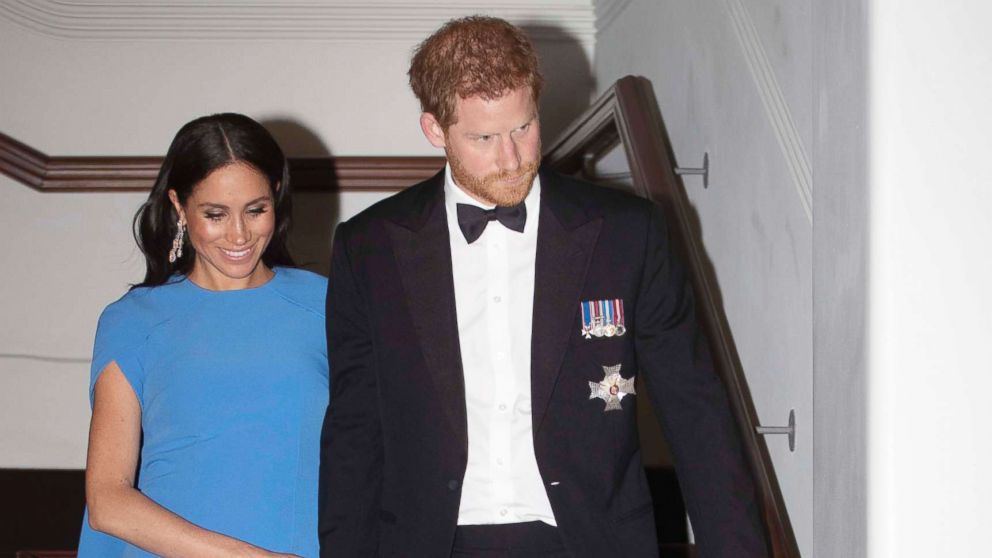 i-Images/Polaris
Prince Harry and Meghan Markle, the Duke and Duchess of Sussex,at a reception and dinner hosted by the President of Fiji at the Grand Pacific Hotel in Suva, Fiji, Oct. 23, 2018.

Meghan wore a full-length cape dress by Safiyaa that was the color of Fijian blue. She accented the dress with a pair of borrowed diamond earrings. 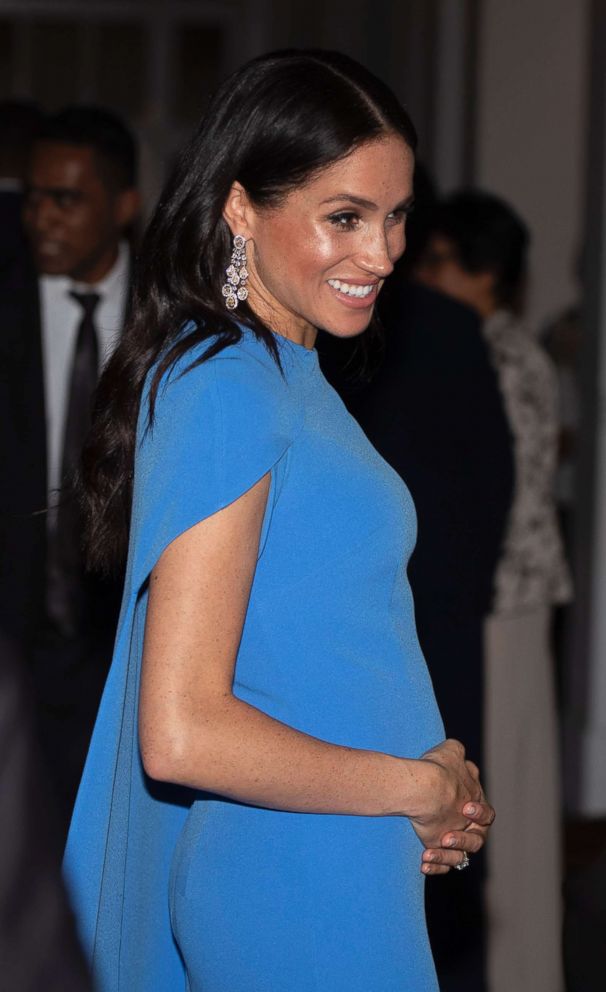 i-Images/Polaris
Meghan Markle, the Duchess of Sussex, at a reception and dinner hosted by the President of Fiji at the Grand Pacific Hotel in Suva, Fiji, Oct. 23, 2018.