Duchess Meghan, a graduate of Northwestern University, returned to college Tuesday to highlight the importance of access to higher education, especially for young women.

Meghan, 38, was greeted by cheers from students at the University of Johannesburg as she arrived at their campus.

"The fact that she’s a black woman in such a high position of power and the fact that she’s advocating for fellow black women ... for someone to be in her position doing what she’s doing for us, it’s incredible," one female student told ABC News' Maggie Rulli. "Representation matters”

The Duchess of Sussex arrives at the University of Johannesburg to take part in a round table discussion with the @The_ACU #RoyalVisitAfrica pic.twitter.com/3aVYx8sihO

Meghan, wearing a dress by U.S. retailer Banana Republic, took part in a round-table discussion with students and professors about the challenges young South African women face in being able to attend colleges and universities. 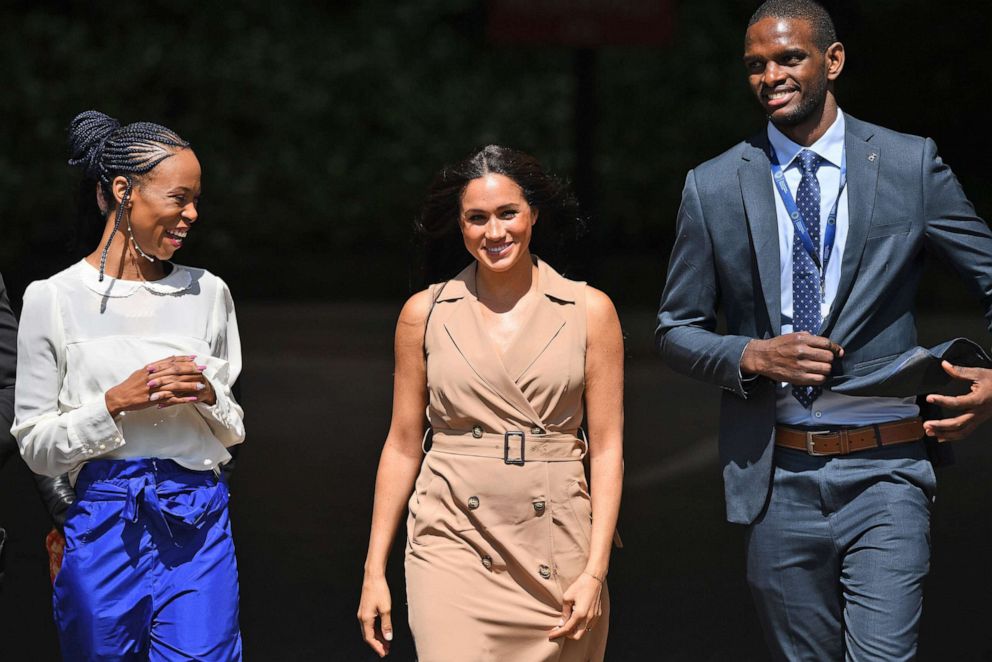 Facundo Arrizabalaga/EPA via Shutterstock
Meghan, the Duchess of Sussex, center, is accompanied by two unidentified officials during a visit to the University of Johannesburg, in Johannesburg, South Africa, Oct. 1, 2019.
Editor's Picks

"When a women is empowered it changes absolutely everything in the community and starting an educational atmosphere is really a key point of that," Meghan said in the discussion, according to ITV News.

The Duchess of Sussex also unveiled a new series of gender grants from the Association of Commonwealth Universities, of which she is patron, and four new scholarships to help students study in different commonwealth countries, according to Buckingham Palace.

Meghan also visited act!onaid South Africa, a gender-based violence charity in Johannesburg, continuing her emphasis as a royal on women and women's rights.

The duchess discussed "the importance of trying to break a generational cycle and empower young girls, as well as working with boys and young men to raise their awareness so they can be a part of the solution rather than the problem," according to Buckingham Palace. She also made a private visit with girls who are being supported after coming "out of situations of abuse and degradation."

Meghan went solo Tuesday for her two events, leaving behind Prince Harry, who is still in Malawi, and their nearly 5-month-old son Archie.

Harry joined a discussion with local youth about sexual/reproductive health and met two mothers to hear about the family planning services available there.
The UK is currently working with Malawi to ensure access to sexual and reproductive health services for 1.2m young people. pic.twitter.com/JnSN6X2jaI

Harry and Meghan will reunite for a series of events in Johannesburg on Wednesday, the final day of their 10-day tour of South Africa.