Elton John paid tribute to Queen Elizabeth II at his Toronto concert following the late monarch's death on Thursday at the age of 96.

"Well of course you know today we had the saddest news about the passing of Her Majesty Queen Elizabeth," he said onstage at the evening show. "She was an inspiring presence to be around and I've been around her and she was fantastic. She led the country through some of our greatest and darkest moments with grace, decency and a genuine care and warmth."

"I'm 75 -- she's been with me all my life and I feel very sad that she won't be with me anymore," the legendary musician continued. "I'm glad she's at peace, and I'm glad she's at rest, and she deserves it because she's worked bloody hard."

MORE: Queen Elizabeth II dies: What to know about funeral, coronation and more

He expressed condolences for the royal family and finished his message with a word on Elizabeth's impact.

"I send my love to her family and her loved ones. And she will be missed, but her spirit lives on and we celebrate her life tonight with music, OK?" John concluded, before launching into his 1974 hit, "Don't Let the Sun Go Down on Me." 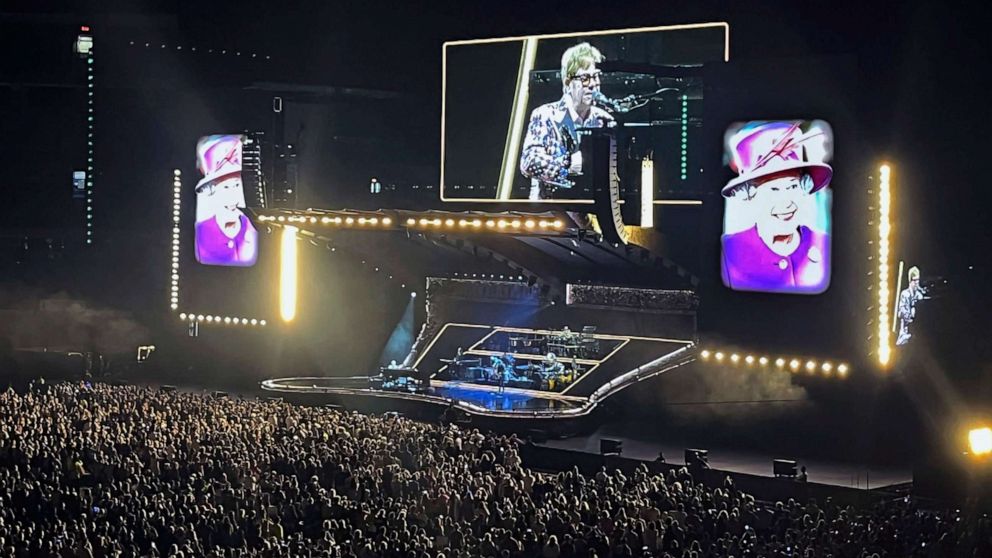 Robert Gillies/AP
Images of Queen Elizabeth are projected during Elton John's concert, Sept. 8, 2022, in Toronto. Elton John paid tribute to Queen Elizabeth II at his final concert in Toronto, saying she inspired him and is sad she is gone. "She led the country through some of our greatest and darkest moments with grace and decency and genuine caring," John said.

The remarks echoed a post on his official Twitter account earlier in the day, in which he called the queen "an inspiring presence to be around."

"Queen Elizabeth has been a huge part of my life from childhood to this day, and I will miss her dearly," he wrote.

John paid similar tribute to Princess Diana shortly after her death in 1997 with the song "Candle in the Wind (Goodbye England's Rose)," a reworking of his 1973 hit honoring Marilyn Monroe.

MORE: Queen Elizabeth II dies at 96: Look back at her 7-decade marriage to Prince Philip

He was knighted by the queen on April 24, 1998, for his musical and commercial contributions to the U.K., as well as his extensive charity work, particularly with AIDS research.

6:58
Queen Elizabeth II, the longest-reigning monarch in British history, was a pioneering female leader on the world stage.