Queen Elizabeth II and Prince Philip had a love story that spanned seven decades, and now the queen has been laid to rest next to her beloved late-husband.

The queen, who died on Sept. 8 at age 96, was buried next to Philip at the King George VI Memorial Chapel at St. George's Chapel on the grounds of Windsor Castle.

During the committal service Monday inside St. George's Chapel, the queen's coffin was lowered into the royal vault, where Philip's coffin has rested since his death last year at the age of 99.

The queen and Philip were buried together in a private family service at the King George VI Memorial Chapel later on Monday.

"The family will observe the queen being buried alongside her husband," said ABC News royal contributor Victoria Murphy, who noted the queen's father, mother and sister are also buried in the same chapel. 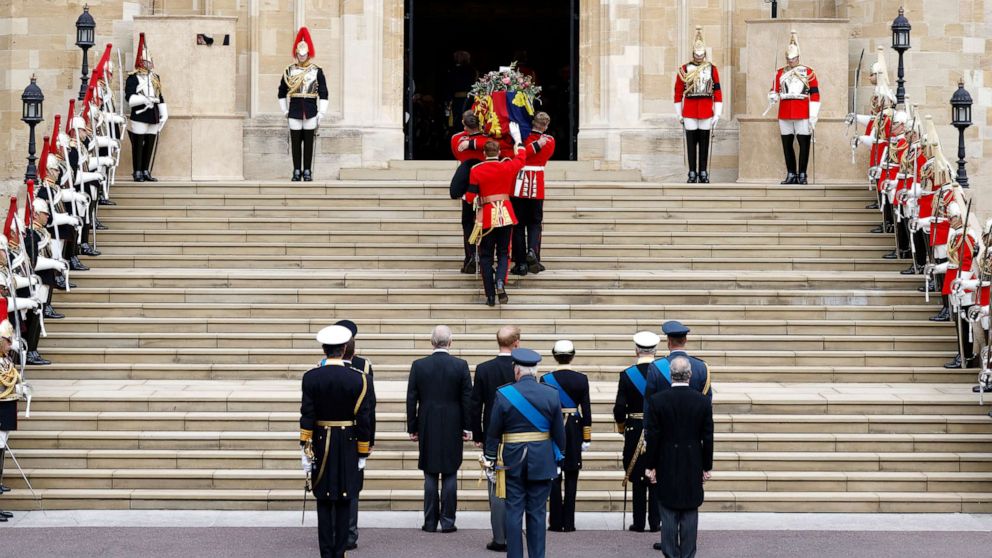 The deaths of the queen and Philip marked the end of a seven-decade love story that started before the queen ascended the throne.

"He is someone who doesn't take easily to compliments, but he has, quite simply, been my strength and stay all these years," Elizabeth said in 1997, paying tribute to her husband on their golden wedding anniversary. "And I, and his whole family, and this and many other countries, owe him a debt greater than he would ever claim, or we shall ever know."

The Greek-born Prince Philip first met then-Princess Elizabeth in 1934 at the wedding of Princess Marina of Greece and Denmark and Prince George, the Duke of Kent. 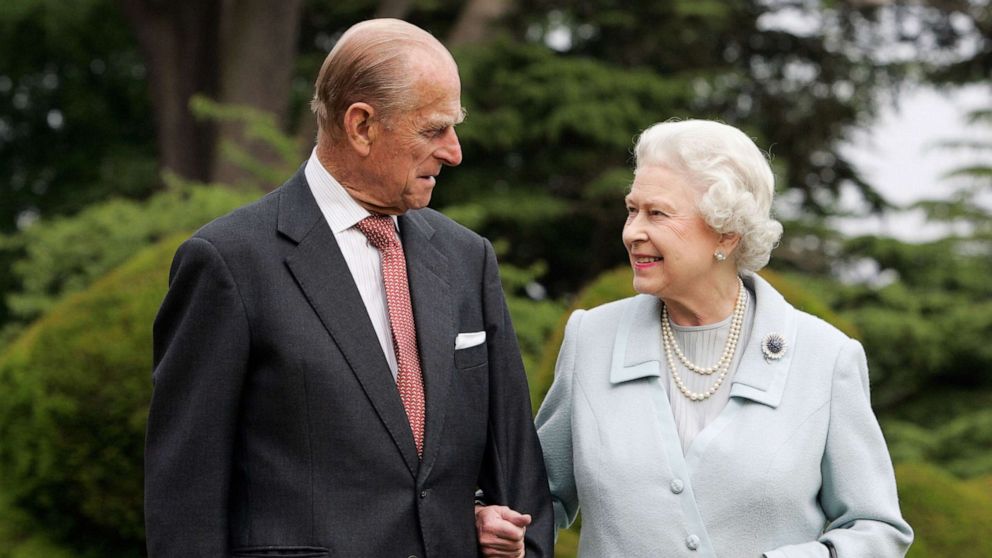 Tim Graham/Getty Images, FILE
In this image, made available Nov. 18, 2007, Queen Elizabeth II and Prince Philip, The Duke of Edinburgh re-visit Broadlands, in Hampshire, England, to mark their Diamond Wedding Anniversary on Nov. 20.

After their first meeting, Elizabeth and Philip met several times over the course of the next decade, and a very young Princess Elizabeth became smitten with the blond, blue-eyed Philip. Her governess recorded that Philip's "Viking good looks" made quite an impression on the princess. 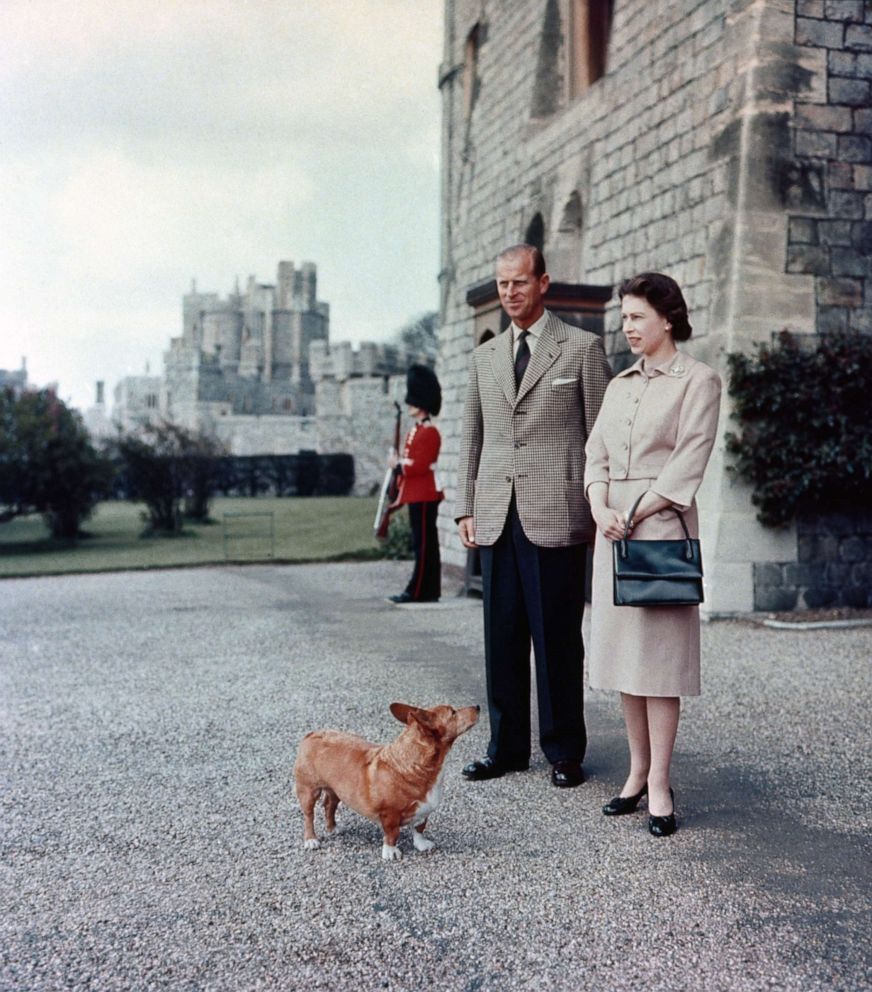 PA Images via Getty Images, FILE
Queen Elizabeth II and Duke of Edinburgh at Windsor joined by Sugar, one of the Royal corgis, June 2, 1959.

The couple exchanged letters and, in 1946, Philip, then in his mid-20s, was given permission by King George VI to marry his daughter, on the condition that they wait until Elizabeth was 21.

Her father's courtiers, however, were less impressed.

There were reportedly reservations about Philip's lack of financial resources and foreign roots, and King George VI was also reportedly concerned about his daughter's young age.

The couple endured the doubts and married on Nov. 20, 1947, in a royal wedding in Westminster Abbey. 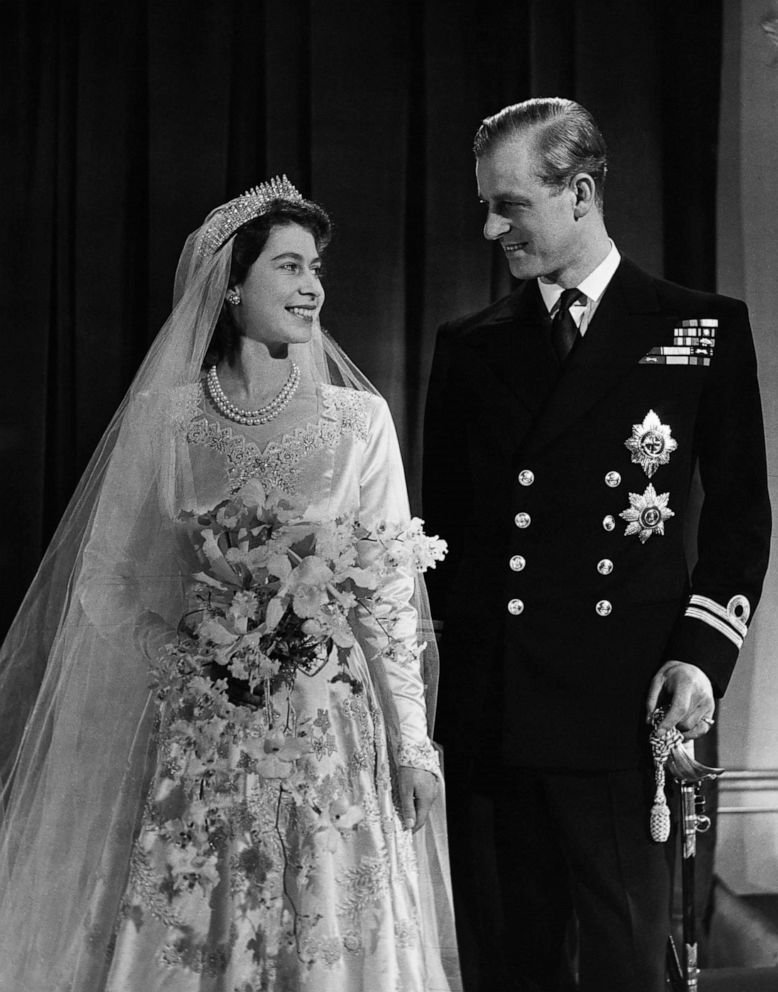 Hulton Deutsch via Getty Images, FILE
Princess Elizabeth, later Queen Elizabeth II with her husband Phillip, Duke of Edinburgh, after their marriage, in 1947.

Philip renounced his Greek and Danish titles and adopted the anglicized surname of his mother's family, calling himself Lt. Philip Mountbatten. His new father-in-law, the king, granted him the titles of Duke of Edinburgh, Earl of Merioneth and Baron Greenwich.

For several years after their marriage, Philip and Elizabeth lived a relatively normal life. He continued to serve in the Royal Navy, and the couple soon had their two oldest children, Prince Charles and Princess Anne.

Philip and Elizabeth's lives changed in 1952 when, while Elizabeth was touring Kenya, her father died.

She became Queen Elizabeth II at the age of 25, and Philip gave up his career in the Royal Navy to support his wife.

The queen did not give her husband the formal title of "prince consort," as was done in the past. Five years after the queen ascended to the throne, though, in 1957, she made Philip, the Duke of Edinburgh, a prince of the United Kingdom. 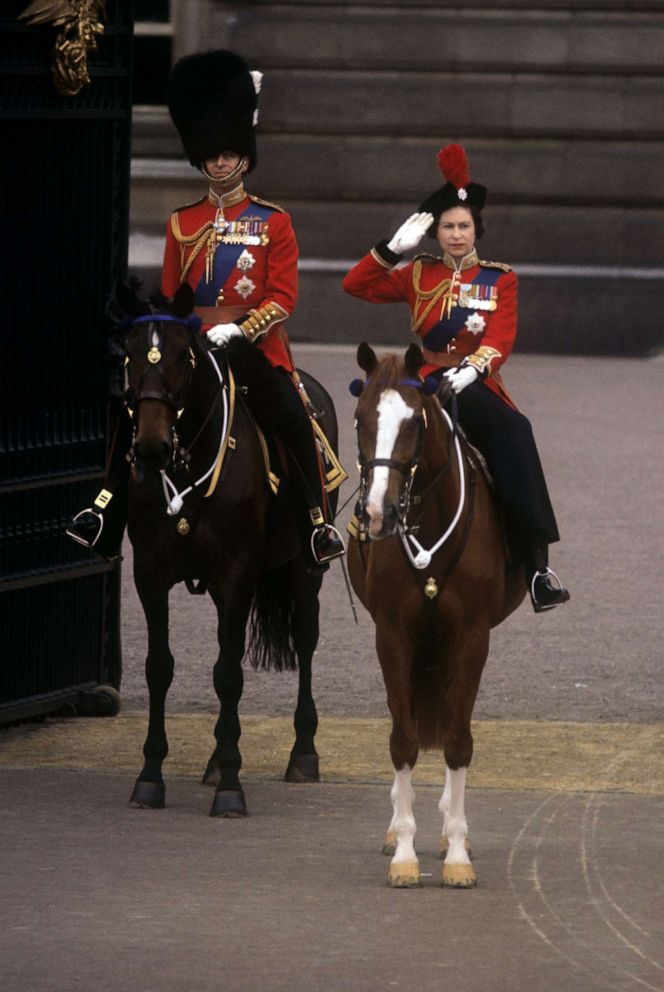 PA Wire via ZUMA Press via Newscom, FILE
Queen Elizabeth II, accompanied by the Duke of Edinburgh, takes the salute outside Buckingham Palace at the conclusion of the Trooping the Colour ceremony, June 13, 1964.

Philip, who had four children with the queen, had reportedly been angry to learn, after his wife's accession, that his children would never bear his last name, according to a 2012 biography of the queen by author Sally Bedell Smith.

"I'm nothing but a bloody amoeba," Philip reportedly said, according to the book. "I am the only man in the country not allowed to give his name to his own children."

Although they didn't bear his surname, Philip took a very active role in the upbringing of his children -- Charles, Anne, Andrew and Edward -- and was very protective of both his family and the family business into which he married. 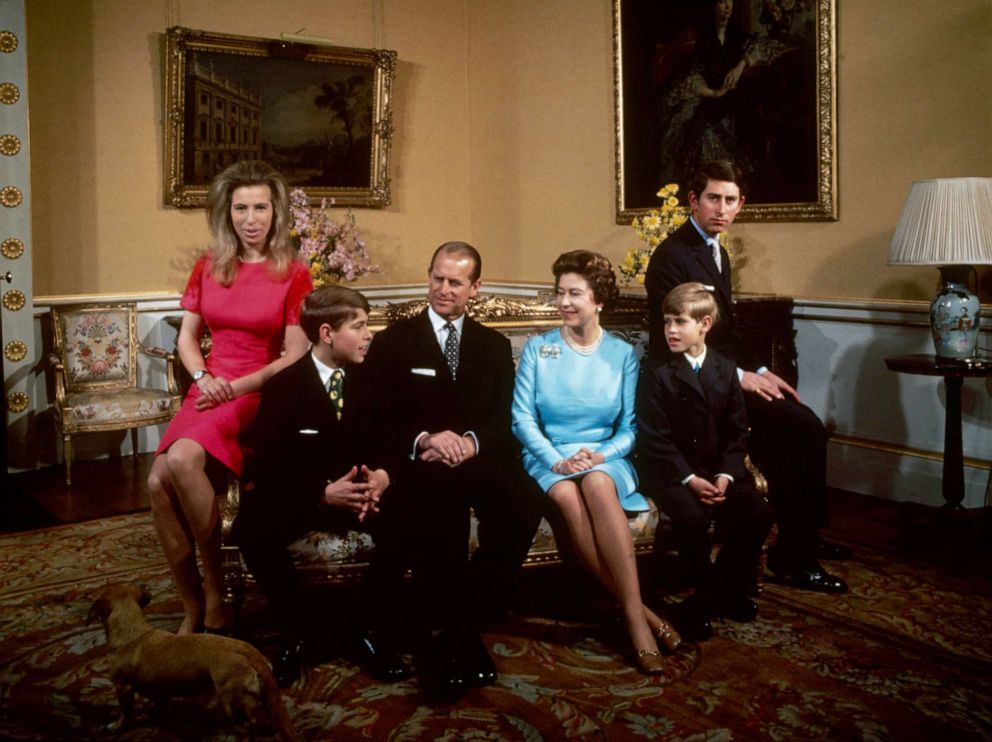 He was by Elizabeth's side on all 251 of the official overseas visits she made before Philip passed away, according to the palace.

For Philip's 90th birthday in 2011, the queen made him a lord high admiral. 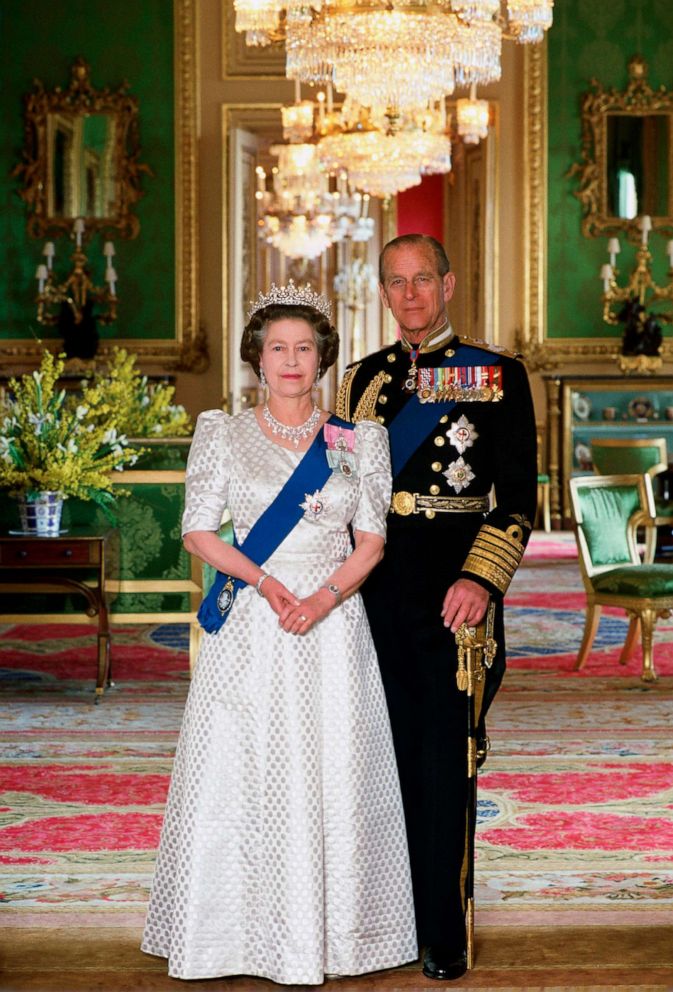 On their 70th wedding anniversary in November 2017, Elizabeth appointed Philip to be a knight grand cross of the Royal Victorian Order for his services to the sovereign.

The couple celebrated their last wedding anniversary together, their 73rd, on Nov. 20, 2020.

In honor of the anniversary, Buckingham Palace released a photo showing the queen and Philip looking at a card made by three of their great-grandchildren, Prince George, Princess Charlotte and Prince Louis, the children of Prince William and Duchess Kate.

Elizabeth and Philip are survived by three sons, King Charles III and Princes Andrew and Edward; one daughter, Anne, the Princess Royal; eight grandchildren and 12 great-grandchildren.