Jimmy Kimmel has apologized to "Abbott Elementary" creator and star Quinta Brunson for his controversial Emmys stunt in which he played dead on the stage next to her while she accepted her award for outstanding writing in a comedy.

Kimmel was to announce the winner of the category along with fellow comedian Will Arnett. Instead, Kimmel pretended to be passed out drunk and was dragged to the stage by Arnett.

Brunson had to step over Kimmel to reach the microphone. The late-night host remained lying on the ground for the entirety of Brunson's acceptance speech.

During her "Jimmy Kimmel Live!" appearance on Wednesday, the host, whose stunt sparked social media backlash, apologized, calling it a "dumb comedy bit." 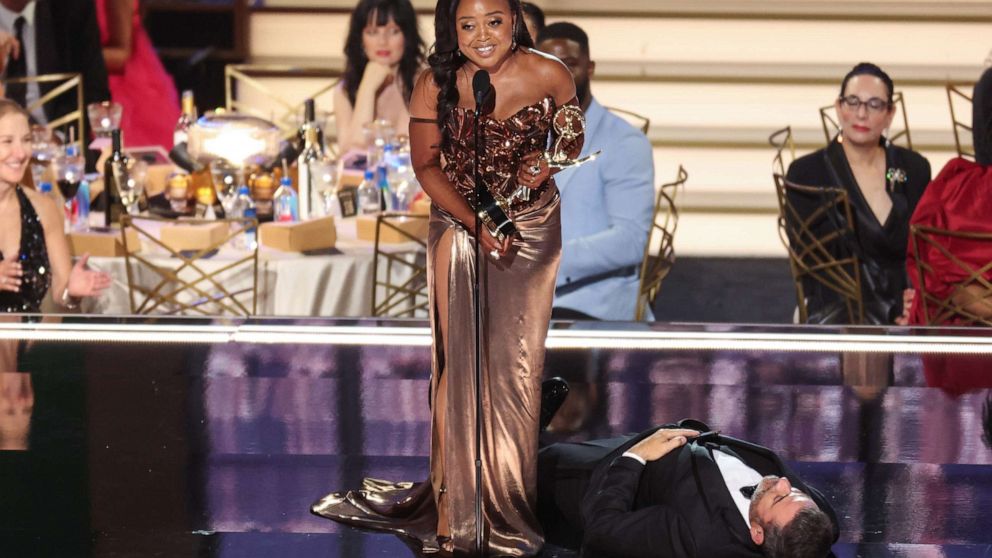 "People got upset -- they said I stole your moment," he told Brunson. "And maybe I did, and I'm very sorry if I did do that. I'm sorry I did do that, actually. And also, the last thing I would ever want to do is upset you because I think so much of you. I think you know that. I hope you know that."

Brunson accepted the apology. "It is very kind of you to say that," she added.

Brunson also said she was so "wrapped up in the moment" and didn't give Kimmel's antics much thought. "I had a good night," she said.

Earlier in show, Brunson interrupted Kimmel's monologue to ask him for "a favor."

"You know how when you win an Emmy and you only have 45 seconds to do an acceptance speech...and you get less time because someone does a dumb comedy bit that goes on a bit too long?" she joked, asking for a couple of extra minutes to thank some people she didn't get around to on Monday.

Kimmel happily agreed, stepping aside to hand Brunson the spotlight, allowing her a moment to get through her thank-you's in full.