The 2022 Emmy Awards honored the best in TV on Monday evening, on what was surely a night to remember.

Kenan Thompson hosted the ceremony from the Microsoft Theater in Los Angeles, dishing out jokes between categories and keeping the show moving as viewers were treated to a few television reunions, memorable acceptance speeches and various tributes.

In the lead performances categories, it was Michael Keaton ("Dopesick") and Amanda Seyfried ("The Dropout") who won for limited or anthology series or movie.

Jason Sudeikis ("Ted Lasso") and Jean Smart ("Hacks") won on the comedy series side while Lee Jung-jae ("Squid Game") and Zendaya ("Euphoria") won on the drama series side.

Scroll down to see some of the biggest moments from the 2022 Emmys.

Standout fashion moments from the 2022 Emmys

Stars took over the red carpet in glamorous looks ahead of the show.

Zendaya made a statement in a black strapless gown by Italian luxury fashion house Valentino. Quinta Brunson also had a standout style moment in a custom strapless gown from Dolce & Gabbana. 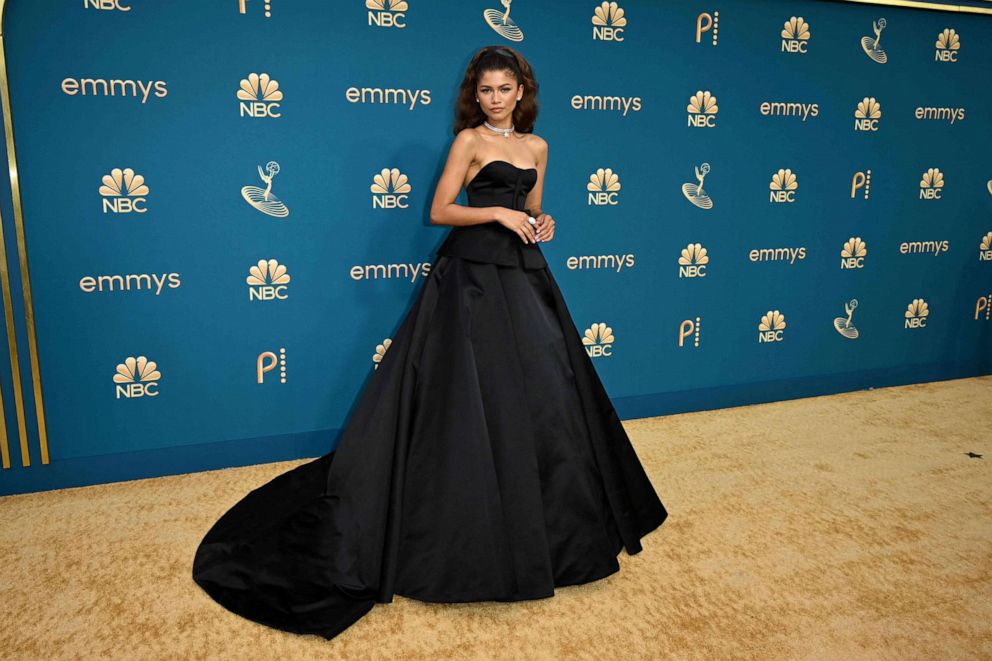 Robyn Beck/AFP via Getty Images
Zendaya arrives for the 74th Emmy Awards at the Microsoft Theater in Los Angeles, Sept. 12, 2022.

Elle Fanning and Sheryl Lee Ralph also made a statement on the carpet in gowns with two-toned trains. Check out a full recap of all the night’s looks here.

The show kicked off with a bang when Thompson showed viewers that iconic television theme songs can be sung along to -- and also danced to.

The "Saturday Night Live" star showed off his dance moves with a choreographed number to the "Friends" theme song before taking fans back to the early 1970s with a fun segment paying tribute to "The Brady Bunch." Audience members then went wild when Emmys announcer Sam Jay introduced that the original cast of "The Brady Bunch" was in the audience for a mini-reunion.

Other television theme songs parodied in the opening number included "Law & Order," "Stranger Things" and "Game of Thrones" -- all with appropriately themed outfits and choreography. 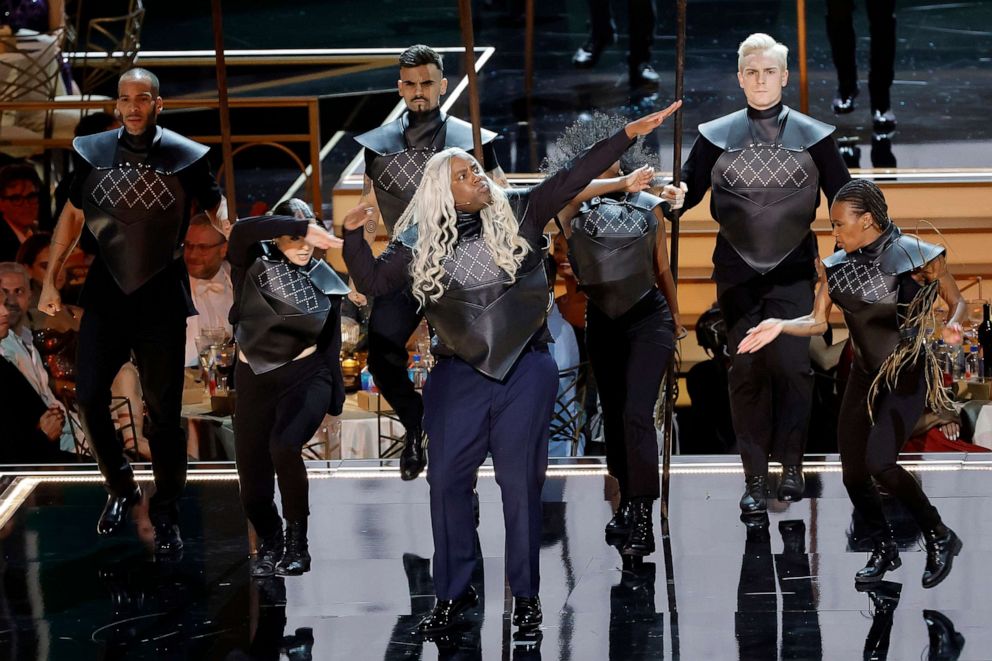 Thompson also opened the show with a joke about how TV is "the greatest invention in the history of mankind."

"I mean, if it weren't for TV, what would we do in our free time? Read a book? No one in this room has read a book in the last 50 years," he joked. "Watch TikTok? Oh, you mean tiny, vertical television?"

The best speeches of the night

Seeing who wins at the Emmys is only half the fun -- the other half is hearing what the stars have to say about their wins. This year's ceremony didn't disappoint in that regard, with the likes of Ralph and Lizzo delivering memorable acceptance speeches.

Ralph, who won the award for outstanding supporting actress in a comedy series for her role as Barbara Howard on "Abbott Elementary," took to the stage and belted out the opening lyrics to "Endangered Species" by Dianne Reeves before getting into her actual speech.

"To anyone who has ever, ever had a dream and thought your dream wasn't, wouldn't, couldn't come true, I am here to tell you that this is what believing looks like," the 65-year-old actress said. "This is what striving looks like, and don't you ever, ever give up on you."

Lizzo, who won for outstanding competition program for her reality dance show "Lizzo's Watch Out for the Big Grrrls," gave a tearful speech about representation. 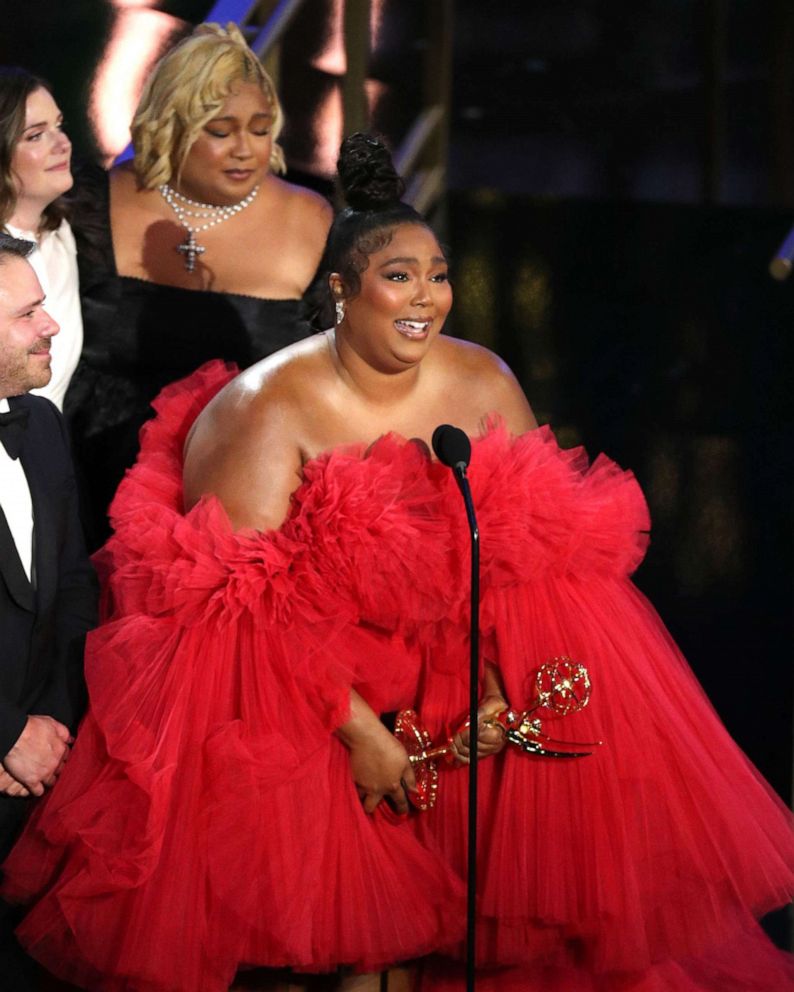 Chelsea Lauren/Shutterstock
Lizzo accepts the Emmy for her show "Lizzo's Watch Out for the Big Grrrls," at the 74th Primetime Emmy Awards, in Los Angeles, on Sept. 12, 2022.

"The trophy is nice, but my emotion is for these people who are on the stage with me," she said of the women who starred on the show. "The stories that they shared, they're not that unique -- they just don't get the platform. Let's just tell more stories."

"When I was a little girl, all I wanted to see was me in the media -- someone fat like me, Black like me, beautiful like me," she continued. "If I could go back and tell little Lizzo something, I'd be like, 'You're going to see that person, but, b----, it's going to have to be you.'"

A blink-and-you-missed-it moment of the night came when Thompson reunited with his longtime collaborator and friend Kel Mitchell. 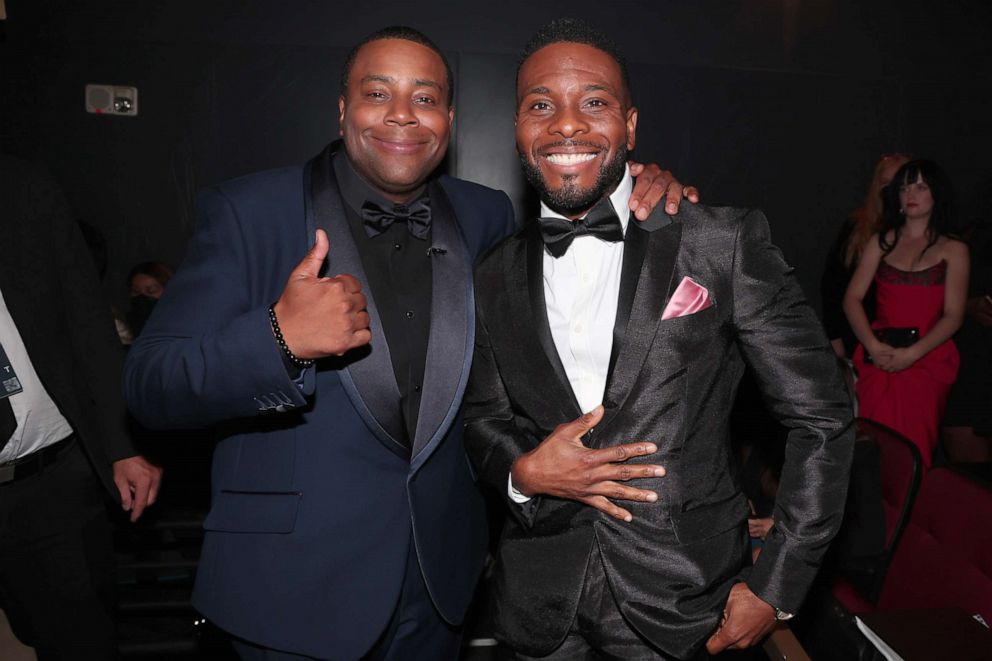 The two starred on Nickelodeon's sketch comedy series "All That" in the '90s before getting their own sitcom, aptly titled "Kenan & Kel," which ran on the network from 1996 to 2000.

Thompson and Mitchell also starred in the movie "Good Burger," which was based on the "All That" comedy sketch series of the same name, in 1997.

Actress Geena Davis accepted the 2022 Governors Award -- which recognizes "an individual, company, or organization that has made a profound, transformational, and long-lasting contribution to the arts and/or science" according to the Emmys website -- on behalf of her organization, the Geena Davis Institute on Gender in Media.

The nonprofit organization, which Davis founded in 2004, was recognized by the Television Academy for its work in promoting gender balance and fostering inclusion throughout the entertainment industry.

The institute is the "only research-based organization working collaboratively within the entertainment industry to create gender balance, advocate for inclusion and reduce negative stereotyping in family entertainment media," according to the Television Academy. 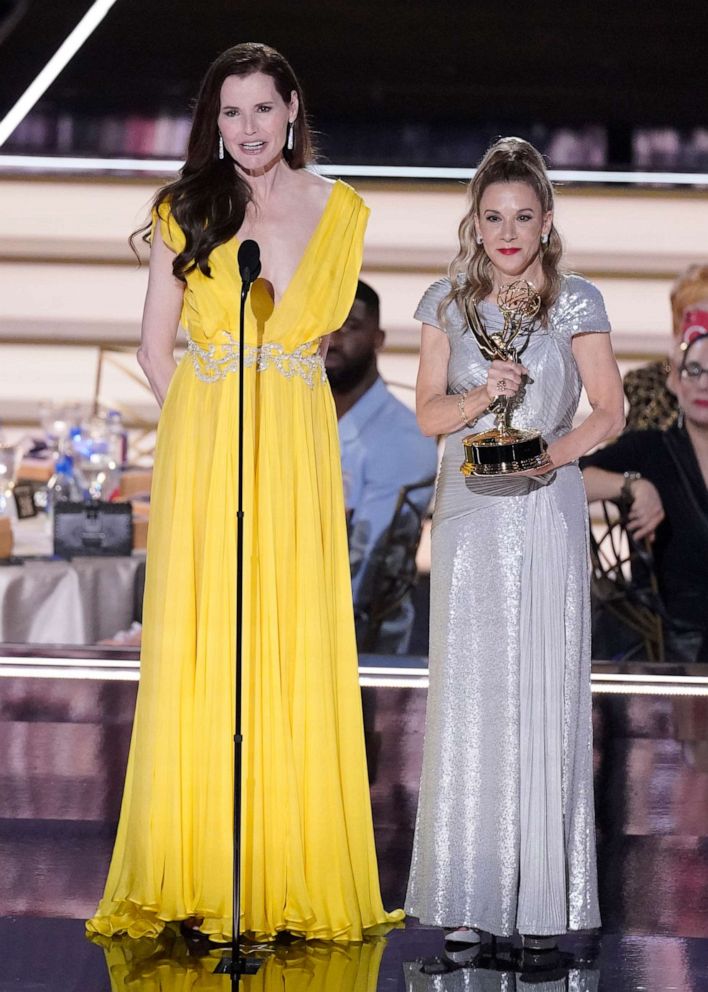 Mark Terrill/Invision via AP
Geena Davis, left, and Madeline Di Nonno accept the Governors award on behalf of the Geena Davis Institute on Gender in Media at the 74th Primetime Emmy Awards on Sept. 12, 2022, at the Microsoft Theater in Los Angeles.

"Tonight is about honoring the best of television," Davis said in her speech. "Television can often directly impact how people see themselves and judge their value in the world. And in the time since I launched the institute, we've made a great deal of progress -- but still there's more work to do, of course."

Singer John Legend delivered a moving tribute to those in the industry who died in the past year.

Legend sang his song "Pieces" on the piano while the Television Academy displayed a slideshow of some of television's biggest stars including, Betty White, Bob Saget, Gilbert Gottfried and Anne Heche. 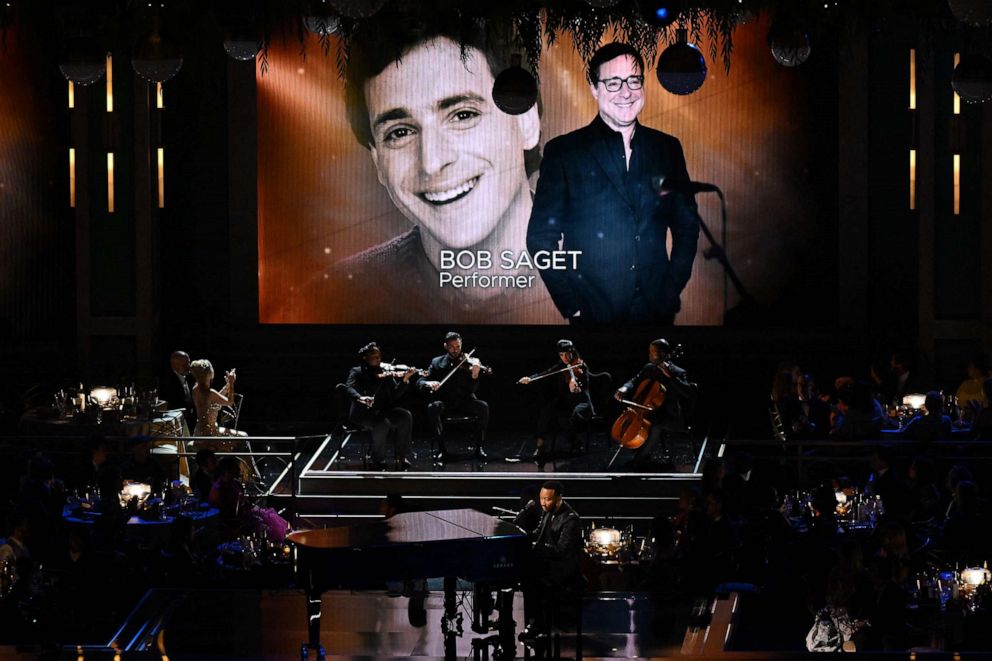 Patrick T. Fallon/AFP via Getty Images
Late actor Bob Saget is seen onscreen during an In Memoriam segment performed by John Legend onstage during the 74th Emmy Awards at the Microsoft Theater in Los Angeles, on Sept. 12, 2022.