Former first lady Michelle Obama is releasing two new editions of her bestselling memoir "Becoming," including one for kids.

The Young Reader edition of "Becoming," adapted for kids ages 10 and older, will feature a special introduction by Obama and three photo inserts, according to Penguin Random House, the book's publisher.

A trade paperback edition of the memoir will include a new introduction by Obama, a letter from Obama to her younger self and a book club guide featuring discussion questions.

Both new editions of the memoir will go on sale in March with a suggested price of $18.99, according to Penguin Random House.

"Becoming" is an in-depth, personal look at Obama's life.

“Growing up on the South Side of Chicago in the 1960s and ’70s, my parents, Fraser and Marian Robinson, always kept it straight with me and my brother, Craig," Obama writes in the Young Reader edition. "They never sugarcoated hard truths or presented their reality as anything other than what it was—because they knew we could handle it. I want to give you all that same respect."

MORE: Kids dress up as Barack and Michelle Obama from Inauguration Day

“So my promise to you is to give you my story in all its messy glory—from the time I struggled in front of my kindergarten class, to my first kiss and the insecurities I felt growing up, to the chaos of a campaign trail, to the strange experience of shaking hands with the Queen of England ... I hope that as you’re reading my story, you’ll also think about your own—because it’s the most beautiful gift you’ll ever have," she writes.

Obama, who served as first lady for eight years, won a Grammy last year for the audiobook edition of "Becoming," which has sold more than 15 million copies worldwide. 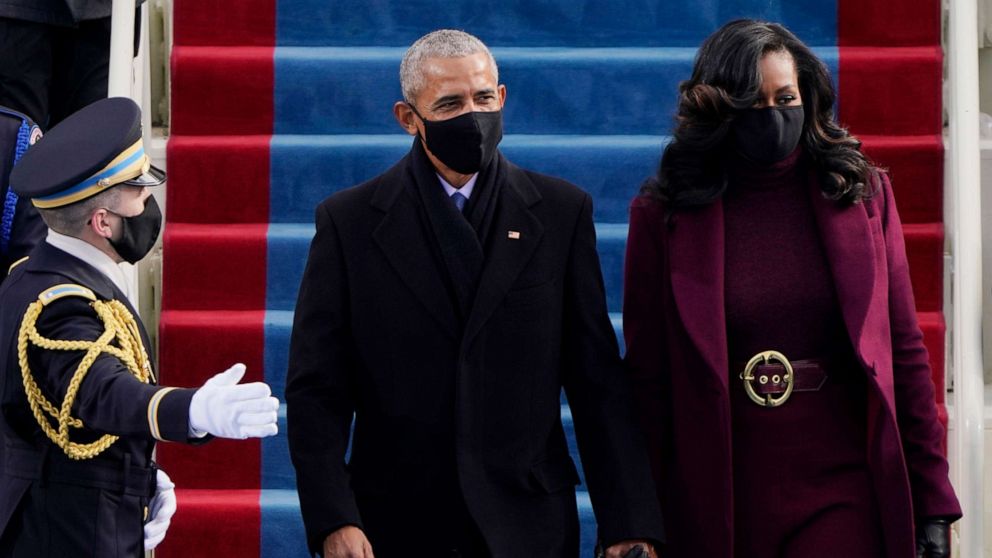 Patrick Semansky-Pool/Getty Images,FILE
Former President Barack Obama and his wife Michelle arrive for the 59th inaugural ceremony on the West Front of the Capitol, Jan. 20, 2021 in Washington, D.C.

The hardcover edition of "Becoming" has appeared for more than 100 weeks on The New York Times bestseller list, and a documentary showing Obama’s 34 city sold-out stadium book tour premiered on Netflix last spring.