Former first lady Michelle Obama is still earning praise for her headline-making inauguration look and now her stylist has given a behind-the-scenes account of her outfit.

Meredith Koop, who worked with Obama during her eight years in the White House, took to Instagram to share details of the former first lady's monochrome pants, coat and top designed by Sergio Hudson, a 36-year-old Black designer from South Carolina who also designed Vice President Kamala Harris' inauguration evening dress and worked with Obama on her "Becoming" book tour.

"With him, I don’t have to explain too much. He gets it," Koop wrote of Hudson, who called the praise for Obama's look "validating." "All of the sketches he sent were gorgeous and it was hard to choose."

When it came to the Biden-Harris inauguration, Koop said she immediately knew she wanted Obama to wear pants.

"I knew from the jump I wanted pants for her. Pants, pants, pants. Ah, the liberation of pants! No skirts, no dresses. Practical beautiful pants," she wrote. "Dark colors. Jewel tones, black, grays. Nothing bright. Sleek, chic and modern." 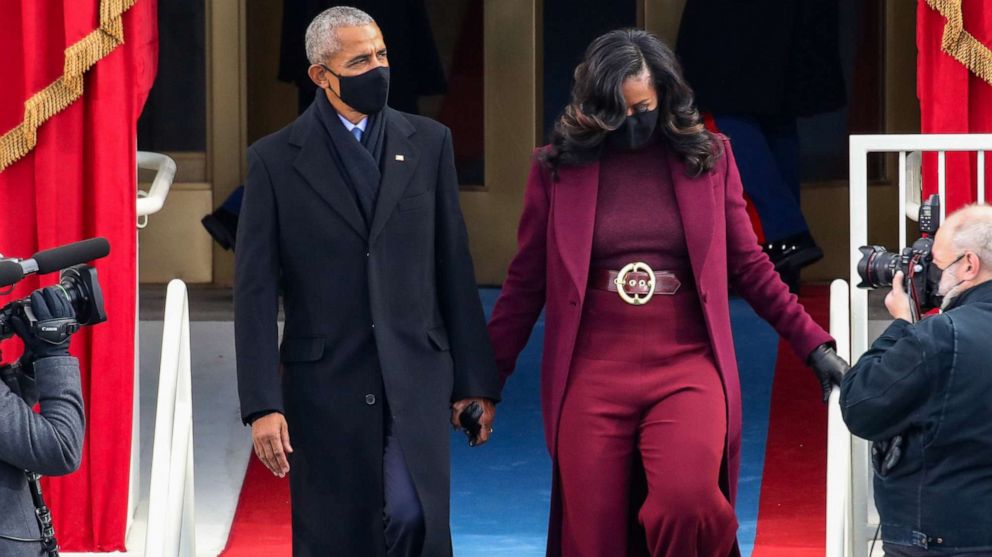 The magenta shade of Obama's suit was seen by some as a nod to bipartisanship but Koop said that was not the case.

"You can call it berry, wine, plum or burgundy. I’m calling it wineberry plum for the moment. What it wasn’t was bi-partisan purple," she wrote. "That’s a cute story, but it wasn’t the intention. I love the different textures in the coat, pants, sweater and belt of this monochromatic look. It was the perfect balance."

Vice President Harris wore a shade of purple to the inauguration, as did former first lady Hillary Clinton, who said her color choice was intentional.

"I thought if you combine red and blue, with the way that we are politically in our country, so you get purple," Clinton said Wednesday. "So I wanted to send a bit of a symbolic message that we have to come together."

Obama, who accented her look with a gold belt and black leather gloves, is known to spotlight American designers with her fashion choices.

When Obama returned from the inauguration festivities on Wednesday, she told Koop she felt "comfortable" in her outfit, a reaction the stylist described as "literal music to my ears."

"I am honored that she trusts me to do what I do, to ideate and execute looks with freedom, to be creative and, yes, to use fashion to send a message and to give a platform to artists/designers," Koop wrote.

"If my client is comfortable, she’s confident. She can show up and not be worried about her clothes or the height of her heel and STILL look fierce as hell," Koop wrote. "Beyond any symbolism I am thinking through or any fashion fantasies I may have, THAT is the essence of my professional relationship with Michelle."

"I have learned to respect her consistent sense of practicality and pragmatism (Capricorn) dressing her in pieces she can live, move and inspire in," she continued.

"What I want to convey most, though, is that this particular outfit is about the woman wearing it more than anything. It is about her and what she means to you and to America," Koop wrote. "She is powerful and she needs to move. She is stunning and she represents what is possible."

"She is relatable and she is aspirational. She has consistently articulated over the years what has been in the hearts and minds of so many," she went on. "She has taken a look at the rule book and turned the page. She leads, she inspires and she slays."