Prince Harry showed his funny and lighthearted side in a new interview with "Late Late Show" host James Corden, while also opening up about serious topics, like his decision with Duchess Meghan to step back from their royal duties and leave the U.K.

"But we never walked away. And as far as I'm concerned, whatever decisions are made on that side, I will never walk away," added Harry, who described his move as a royal as "stepping back rather than stepping down." "I will always be contributing ... my life is public service, so wherever I am in the world, it's going to be the same thing."

A post shared by The Late Late Show (@latelateshow)

Prince Harry and Meghan, the Duke and Duchess of Sussex, announced their decision to step back from their royal duties last January. The couple completed their last official royal engagement last March and have now settled in Santa Barbara, California, with their son, Archie, who will turn 2 in May.

Buckingham Palace confirmed this month that Harry and Meghan will not return as working members of Britain's royal family.

"I have no idea," Harry said when asked by Cordon how he envisions his life in California as the state begins to reopen after the coronavirus pandemic. "A slightly different version but a continuation of what we were doing back in the U.K. anyway."

He went on, "My life is always going to be about public service and Meghan signed up to that and the two of us enjoy doing that. Trying to bring some compassion and trying to make people happy and trying to change the world in any small way that we can." 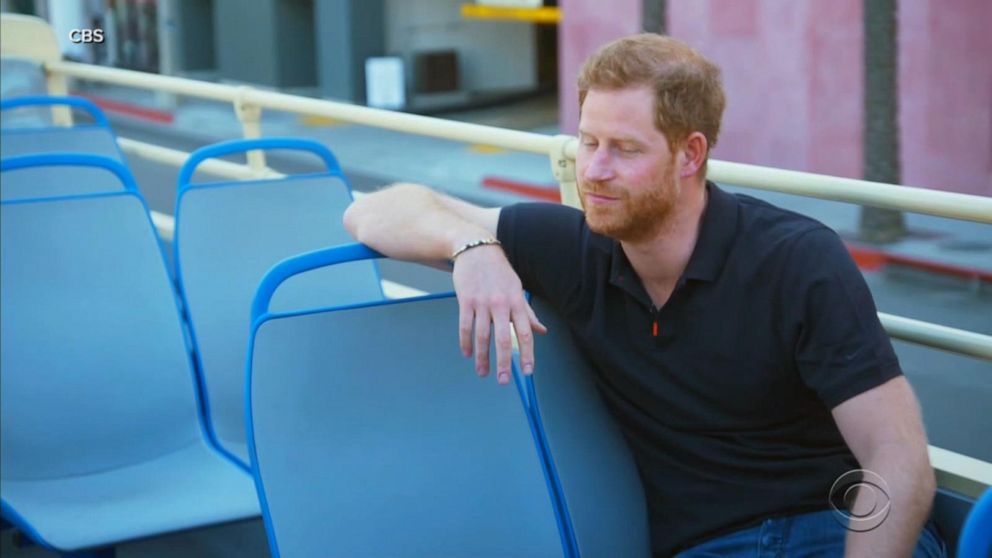 The interview with Corden, conducted atop a Los Angeles tour bus, was Harry like the public has never seen him before. The duke showed off his funny side, rapped the "Fresh Prince of Bel-Air" theme song as he and Corden visited the actual house, which Corden encouraged Harry to buy, took on a military-style obstacle course with Corden and allowed the TV host to FaceTime on his iPhone with Meghan, who we learned has a nickname for Harry, "Haz."

The Sussexes, who are expecting their second child, wed in 2018 after meeting through friends.

Harry also opened up to Corden, who attended the couple's wedding at St. George's Chapel, about his courtship with Meghan, saying the pair went "from zero to 60 in the first two months."

"The second date I was starting to think, 'Wow, this is pretty special,'" he said. "It was just the way that we hit it off with each other and we were so comfortable in each other's company."

"Dating with me, with any member of the royal family I guess, is kind of flipped upside down," Harry added. "All the dates become dinners, watching the TV or chatting at home, and then eventually, once you become a couple, then you venture out to dinners, to the cinema, to everything else. So everything was done back to front with us, so actually we got to spend an enormous amount of time just the two of us, rather than going to friends' houses or out for dinner where there are other distractions. There were no distractions and that was great."

Nearly three years later, Harry and Meghan's family life is fairly normal, with Harry telling Corden that a typical night consists of bathing and putting Archie, whom Harry described as "hysterical" and already talking and singing, to bed.

A post shared by Save The Children UK (@savechildrenuk)

Then he and Meghan will eat takeout or something Meghan has cooked and watch "Jeopardy!" or something on Netflix.

Speaking of Netflix, "The Crown," which is a fictional drama depicting the royal family, Harry said he prefers the show to tabloid stories about his family.

"They don't pretend to be news," he said of the show. "It's fictional, but it's loosely based on the truth. Of course it's not strictly accurate. But loosely, it gives you a rough idea about what that lifestyle, what the pressures of putting duty and service above family and everything else, what can come from that."

"I'm way more comfortable with 'The Crown' than I am seeing the stories written about my family or my wife or myself," Harry said, adding that he'd like to see Damian Lewis play him on TV. "Because it's the difference between that is obviously fiction, take it as you will, but this is being reported on as fact because you're supposedly news, and I have a real issue with that."

When it comes to his family members in the U.K., Harry said he is staying in touch, including doing video calls with his grandparents, Queen Elizabeth and Prince Philip, who gave Archie, their great-grandson, a waffle maker for Christmas.

"Breakfast now, Meg makes up a beautiful, like organic mix, in the waffle maker, flip it, out it comes, and he loves it," Harry said. "Archie wakes up in the morning and literally just goes, 'Waffle.'"