Prince Harry and Meghan's highly anticipated new docuseries is here and the couple is sharing more about how they met and fell in love.

In the first of three episodes that were released Thursday in the six-part series, "Harry & Meghan," the couple opened up on how they came into each other's lives in 2016.

Harry revealed he was looking through his feed on Instagram when he came across a video with Meghan in it.

"I was scrolling through my feed and someone who was a friend had this video of the two of them, like a Snapchat," he shared.

Their mutual friend, who was not named in the docuseries, reached out to Meghan to share that Harry had asked about her and then showed Meghan Harry's Instagram account.

"I went through and it was just beautiful photography and all these environmental shots," Meghan said.

Harry and Meghan decided to meet when Meghan was in London for Wimbledon. Their first date was at 76 Dean Street and Meghan said Harry was late.

Meghan said she wondered if Harry was "one of the guys who have so much of an ego that any girl would sit around and wait for a half hour for you." She said she soon realized that was not the case, describing him as "refreshingly fun." From the moment they met Meghan said she and Harry were "childlike together."

They said they chatted for around an hour and parted ways, as Meghan said she had other plans. She then shared that she called him that night and asked if he would want to go to dinner the next night.

"I'm sure he told me it was so forward and American," she said. This time, Harry joked that Meghan was the late one.

In the episode, a selfie of the couple smiling together on that date is shown, which Meghan said they took because they wanted to "capture the feeling."

"That was when it just hit me," Harry said. "This girl, this woman is amazing -- everything I’ve been looking for. She’s so comfortable and relaxed in my company."

In the episode, Meghan's friend Silver Tree said Meghan told her that she was crazy about Harry after their two dates, while her friend Lindsay Jill Roth said Meghan was "giddy" but "also trying to live in the moment."

Roth added, "She wanted to just get to know him for him, not for who the public thought he was."

Harry's pal Nacho Figueras said Harry shared that he thought Meghan might be the one even though they'd just met.

“You could tell right away that those were the eyes of someone who had fallen in love," Figueras said about Harry.

The Duke of Sussex reflected on his marriage, saying, "I think for so many people in the family, especially the men, there can be a temptation or an urge to marry someone who would fit the mold, as opposed to somebody who you perhaps are destined to be with."

He went on, "Difference between making decisions with your head or your heart and my mum certainly made most of her decisions, if not all of them, from her heart. And I am my mother's son."

Throughout the rest of the first episode, the Sussexes discuss how they maintained their long distance relationship and why privacy was so important to them as their connection developed.

"I knew that the only way that this could possibly work is by keeping it quiet for as long as possible," Harry said, with Meghan adding that their relationship was their "guarded treasure" in the beginning. They communicated through FaceTime and phone calls and Meghan said it was "relaxed" and "easy" to get to know one another. 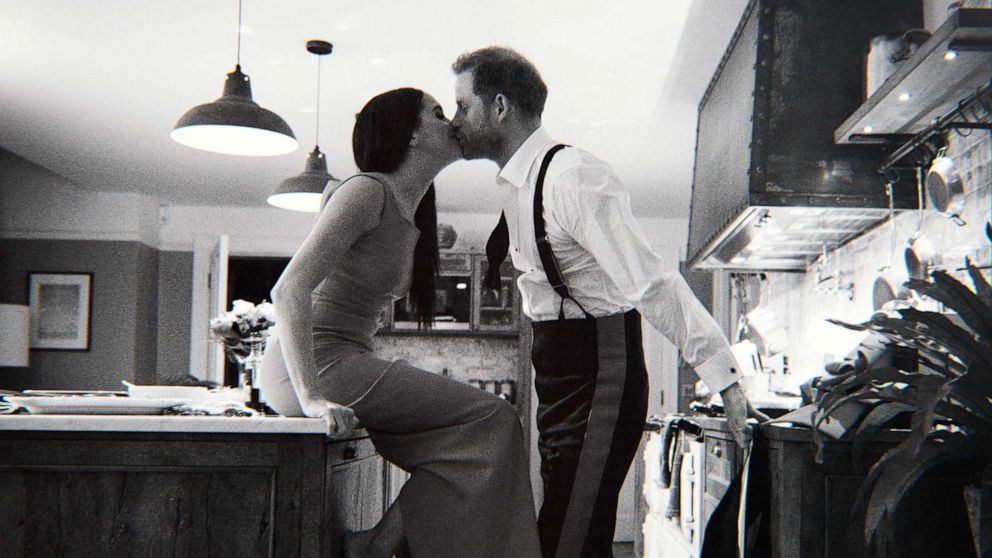 Harry also described how he saw his late mother in his future wife.

The first episode of the docuseries also features the couple reflecting on their five days spent together in Botswana in August 2016. Harry said he was "astonished" Meghan agreed to meet him there after their second date.

"We had to get to know each other before the rest of the world and the media sort of joined in," Harry said.

Harry also shared the two had a "two-week" rule that required them to see one another every two weeks. Meghan traveled to visit Harry in the U.K., as it was easier for her to go there unnoticed. She said the secrecy and privacy around their relationship at the start helped them build a strong connection.

"It just accelerates your level of getting to know each other when you're not out in the world in courtship, you're just together," Meghan said.

The final three episodes of Prince Harry and Meghan's docuseries will be released on Netflix on Dec. 15.

Read more on everything to know about the Liz Garbus-directed six-part docuseries "Harry & Meghan" here.