Prince Harry says he and Oprah Winfrey had a "key moment" while making their new docuseries, "The Me You Can't See," about how helping other people heal has helped them heal, too.

The Duke of Sussex, who co-created and executive produced the Apple+ series with Winfrey, told "Good Morning America" co-anchor Robin Roberts the moment came while the pair were in a conversation with Zak Williams, who has become an outspoken advocate for mental health awareness in the nearly seven years since his father, the actor Robin Williams, died by suicide.

"Zak's story a classic example, and the sort of parallel thread between what happened with him at his age and what happened to me at my age, it's remarkably similar," said Harry, whose mother, Princess Diana, died following a car crash in 1997, when Harry was 12. "But there was one thing that he said in a follow-up conversation, which was his service to others has helped heal him, and I think that was a really key moment for Oprah, myself, and Zak ... to go, 'Wow, this, it's true.'"

"Oprah, in your career [it's true]. It's been true for me in starting the Invictus Games, to be able to create something," continued Harry, an Army veteran who founded the Paralympic-style competition for wounded service members in 2014. "To watch other people heal is part of our own healing process."

In their new five-part series, Harry and Winfrey share the mental health experiences of everyday people around the world as well as high-profile guests including Zak Williams, Lady Gaga and Glenn Close.

"Stigma thrives on silence," Harry said of wanting to pull back the curtain on the issue. "So as long as it thrives on silence, the best that we can all do collectively is continue to talk and share stories that are so relatable to so many people around the world." 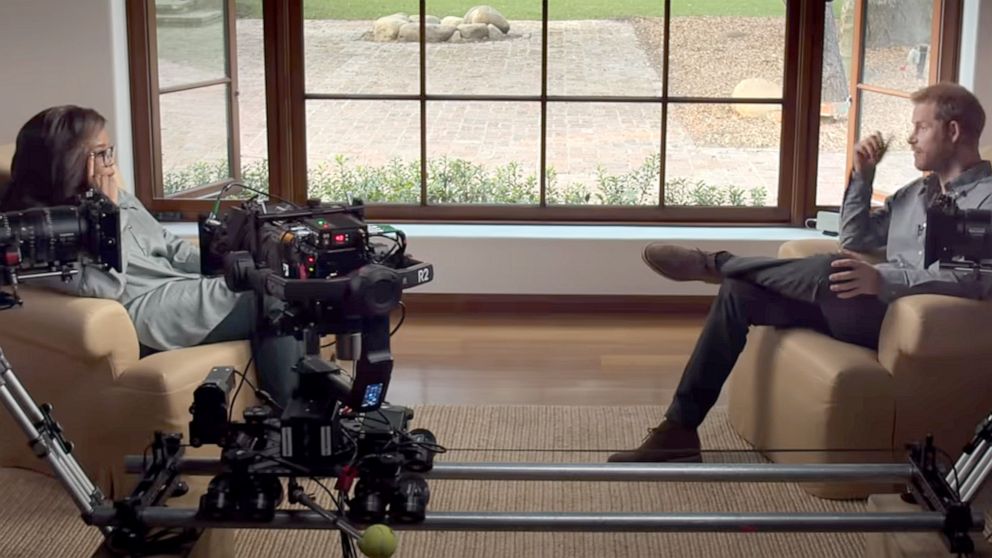 Apple TV+
Prince Harry sits with Oprah Winfrey in their new Apple+ series "The Me You Can't See" where they join forces to guide honest discussions about mental health. The series will air on May 21, 2021 on Apple TV+.

Winfrey said she and Harry hope people understand through the docuseries that "mental fitness is a spectrum and that we're all on the spectrum."

"In the United States specifically, one out of five people admit to some kind of mental health struggle so that means that everybody is or knows somebody who is going through something," said Winfrey, citing a statistic from the Centers for Disease Control and Prevention (CDC). "So I know that one of the lessons in 25 years of listening to people's stories is that everybody wants to be heard, they want to be seen, they want to know that they matter."

Harry and Winfrey, who attended Harry's 2018 wedding to his wife, Meghan, the Duchess of Sussex, announced their plans to team up for a documentary on mental health in 2019.

Since then, the pair collaborated across continents and, more recently, as neighbors in Montecito, California, and on Zoom calls during the coronavirus pandemic.

"I will have to say Harry was in every meeting. He was there, usually on Zoom before I was, and turning in his notes before I did," Winfrey said, adding with a laugh, "I was like, 'Ugh, Harry turned in his notes already.'"

"I didn't know it was a competition," Harry replied, also laughing. "Now that I know, I'm very glad I did."

Harry and Winfrey's familiarity with each other helped lead to the revealing interview the duke and Meghan gave to Winfrey in March, during which the couple opened up about their own mental health struggles and their decision to step down from their roles as senior, working royals.

Meghan -- who is pregnant with the couple's second child, a girl, and who also appears in "The Me You Can't See" -- opened up about suicidal thoughts she had during her time in the royal family, while Harry said he, too, "went to a very dark place." 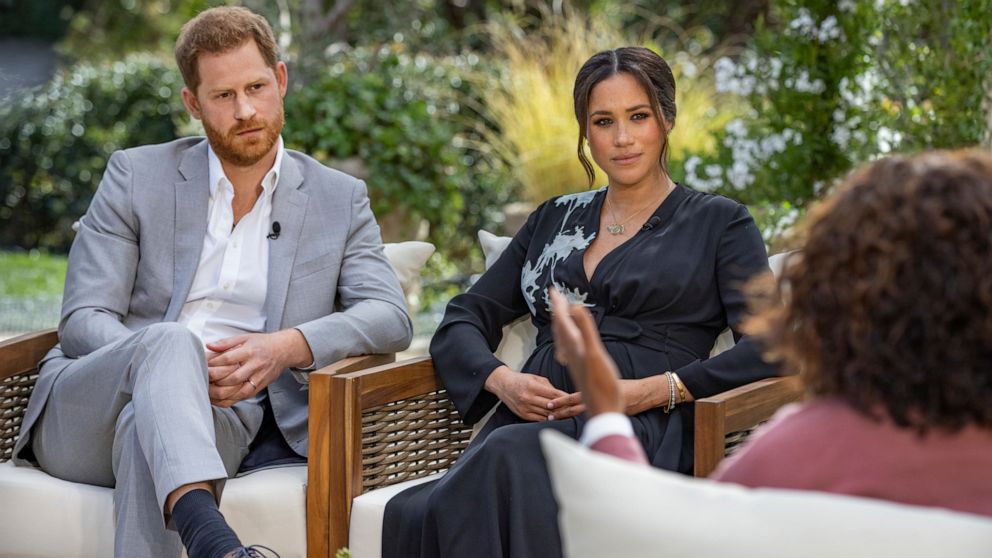 In the documentary, Harry says it was Meghan who encouraged him to address his unresolved grief when they met four years ago.

“I quickly established that if this relationship was going to work that I was going to have to deal with my past because there was anger there and it wasn’t anger at her, it was just anger,” Harry tells Winfrey. “And she recognized it. She saw it.”

Winfrey said she believes Harry opening up about coping with his own grief will be helpful to people, especially those who have lost loved ones during the coronavirus pandemic.

"I think lots of people have been through grief, particularly this year ... and have not been able to grieve properly," Winfrey said. "So I think hearing someone like Harry talk about it or hearing other people share how their inability to really step into the moment and do the grieving in a way that could be helpful to them at the time allows other people to see themselves."

MORE: Prince Harry says he is focused on 'breaking the cycle' as a dad

Harry said he also believes there needs to be new ways of talking about mental health and grief as the world begins to reopen amid the pandemic.

"I think globally we've now all had a shared experience. We've experienced something similar, albeit in different aspects and different locations around the world," he said. "We've all felt things that we probably never felt before, and that to me says that we should now be talking about things that we've never talked about before."