Prince William and Princess Kate made a surprise visit to meet students and parents Thursday to tackle and discuss cyberbullying, one of their most important charitable initiatives.

Their latest campaign is an extension of "Stop, Speak, Support" which helps children cope with bullying, and the Duke of Cambridge’s Taskforce on the Prevention of Cyberbullying.

It is an issue that has resonated and become critically important to Prince William and Princess Kate since becoming parents to their children Prince George, Princess Charlotte and Prince Louis. 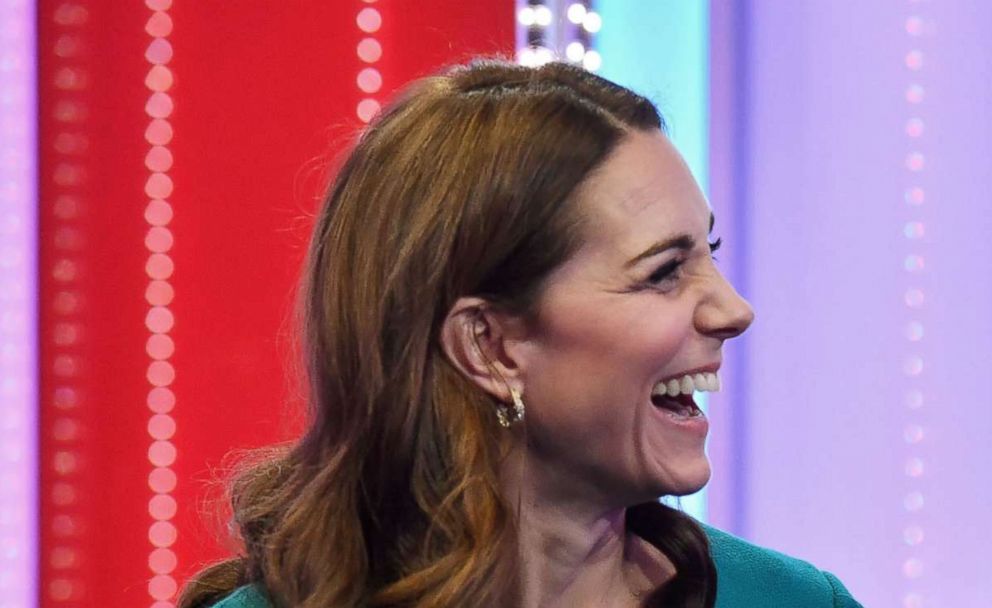 “I convened the task force because I was a new parent," William said Thursday at the BBC. "And I saw that my friends and peers were seriously worried about the risks of the very powerful tools we were putting in our children’s hands."

Prince William gave one of the most compelling speeches of his career, lambasting social media companies like Facebook, Google and other social media giants who he doesn’t think are doing enough to protect children from bullying, hate speech, trolling and privacy and are putting profits before the protection of young people.

“We have to acknowledge that much of the early optimism and hope of social media is giving way to very real concern, and even fear about its impact on our lives.” — The Duke of Cambridge #AntiBullyingWeek pic.twitter.com/75cBTvTAgm

"The noise of shareholders, bottom lines, and profits is distracting them from the values that made them so successful in the first place," said William, who was moved to act on the issue after speaking to many parents whose children had taken their lives as a result of cyberbullying.

“You can reject the false choice of profits over values. You can choose to do good and be successful. You can work in the interest of the children and parents who use your products and still make your shareholders happy.” – The Duke of Cambridge to Social Media companies pic.twitter.com/LXretdiT5c

The Duke of Cambridge’s speech coincides with Anti-Bullying Week in the U.K.

Princess Kate wore a recycled dress by Emilia Wickstead, one of the British designers she relies on frequently for a variety of her most prominent engagements. 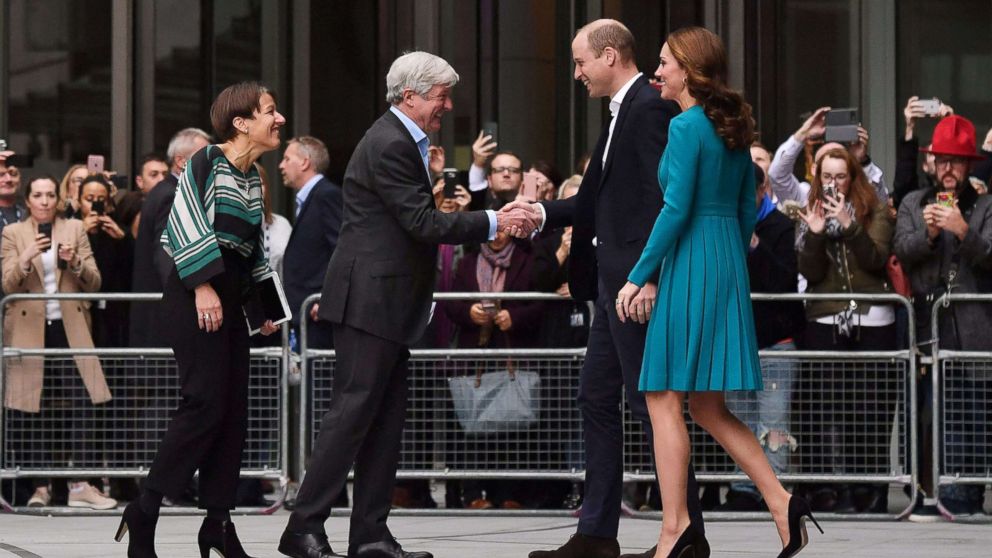 Ben Stansall/Pool via AFP/Getty Images
Britain's Prince William and his wife, Catherine, Duchess of Cambridge, are greeted by Director-General of the BBC Tony Hall and Director of BBC Children's Alice Webb during a visit to the BBC Broadcasting House in London, Nov. 15, 2018 to view the work the broadcaster is doing as a member of The Duke's Taskforce on the Prevention of Cyber bullying.

William and Kate's visit Thursday to the BBC follows a busy few days for the couple.

They spent Wednesday in Yorkshire, where they visited Centrepoint, the homeless charity that William took over as patron in 2005, following in the footsteps of his mother, Princess Diana, who served as patron until her death.

Visiting the new @CentrepointUK Andy Norman Learning Hub, which will provide a dedicated space and resource for young people at risk of homelessness in Barnsley, helping improve their skills and work towards independence. pic.twitter.com/gCMtpnKprI

Both Prince William and his brother Prince Harry made private visits to the charity as children with Princess Diana and it has been particularly important for William to carry on her work on behalf of the homeless.

(MORE: Prince Harry describes the moment he asked Prince Charles to walk Meghan down the aisle)

Kate was dressed in an off-the-shoulder pink dress accessorized by a stunning pair of statement chandelier diamond earrings that she last wore to the BAFTAS in 2017. 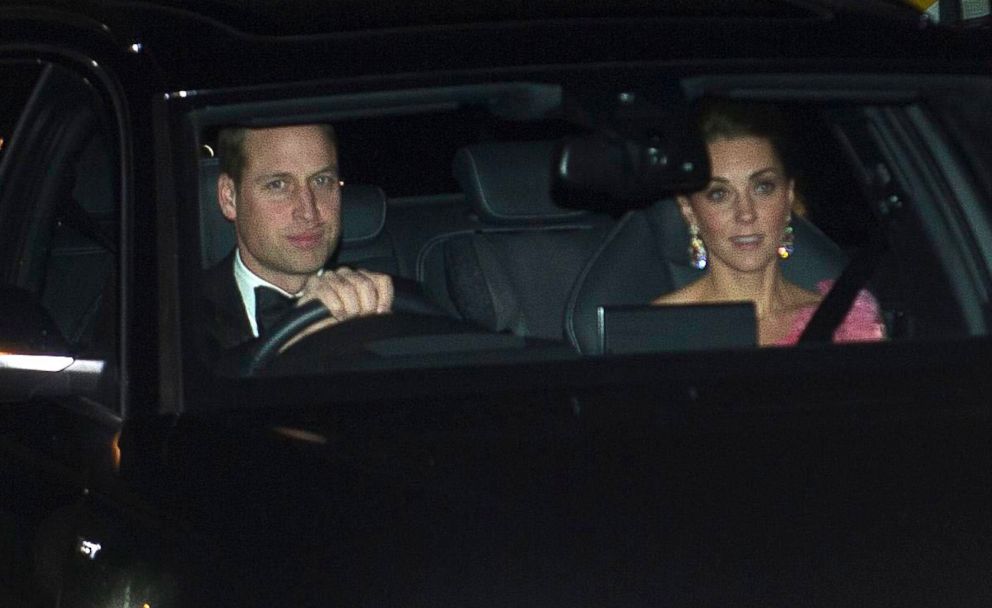 Meghan, the Duchess of Sussex, also wore a stunning pair of borrowed earrings which she was last seen wearing in Fiji. 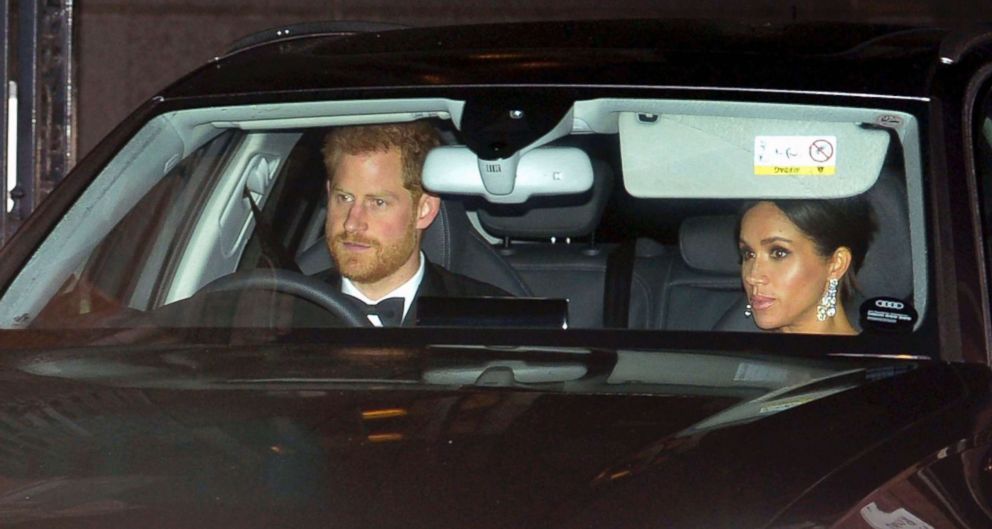 Nick Ansell/PA via AP
Britain's Prince Harry and Meghan, Duchess of Sussex arrive at Buckingham Palace in London for the Prince of Wales' 70th birthday party, in London, Nov. 14, 2018.

The Queen made a poignant toast to Prince Charles at the lavish black-tie event.

“Over his 70 years, Philip and I have seen Charles become a champion of conservation and the arts, a great charitable leader —- a dedicated and respected heir to the throne to stand comparison with any in history —- and a wonderful father," she said. "Most of all, sustained by his wife Camilla, he is his own man, passionate and creative. So this toast is to wish a happy birthday to my son, in every respect a duchy original. To you Charles. To the Prince of Wales."

The party was attended by numerous royal families around the world, including King Juan Carlos and Queen Sofia of Spain, Crown Prince Frederik and Crown Princess Mary of Denmark, Queen Rania of Jordan, King Harald and Queen Sonja of Norway and Prince Albert of Monaco.