The "Avengers: Endgame" spoiler ban is officially over -- so if you're still tiptoeing around "Endgame" details, stop here because this story is FULL of SPOILERS.

And those spoilers come directly from directors Anthony and Joseph Russo. The powerhouse duo recently taped an interview with film critic Peter Travers about their record-breaking $2 billion dollar blockbuster film.

The Russos said it's time for fans to start talking freely about the movie in their candid interview on "Popcorn with Peter Travers" featuring answers to all the questions everyone has been asking. 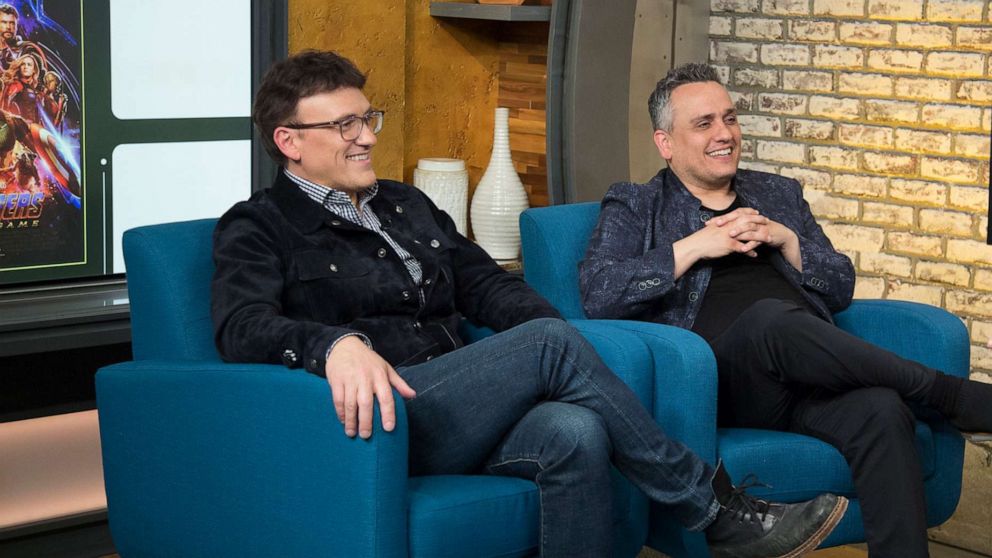 Peter Travers: "Infinity War," you snap your fingers and half the world's gone. What a power move.

Anthony Russo: One of the great joys of working in the Marvel Cinematic Universe and with the serialized storytelling at the cinematic level, is that we get to take chances and we get to go places in individual films that you might not be able to otherwise. It's very rare to see a Hollywood movie, especially a big major release where the bad guy wins.

But life isn't like that. Sometimes the bad guy wins. We all have to endure that. So to be able to tell a story where the bad guy wins and it's okay for the audience, because they know that even though the movie ended that way there's still hope for the future because the story's not over, that's a very unusual experience, unusual opportunity for filmmakers to tell that kind of story.

Peter Travers: They can't seem to accept that it's over. I think that's why you hear people saying, 'I saw it three times.'

Joe Russo: Nothing has value unless it has an ending, right? I think that's why there's so much energy around this movie ["Avengers: Endgame"] is that it's a true finale. This is an ending for a number of characters that people have come to love for the last decade. 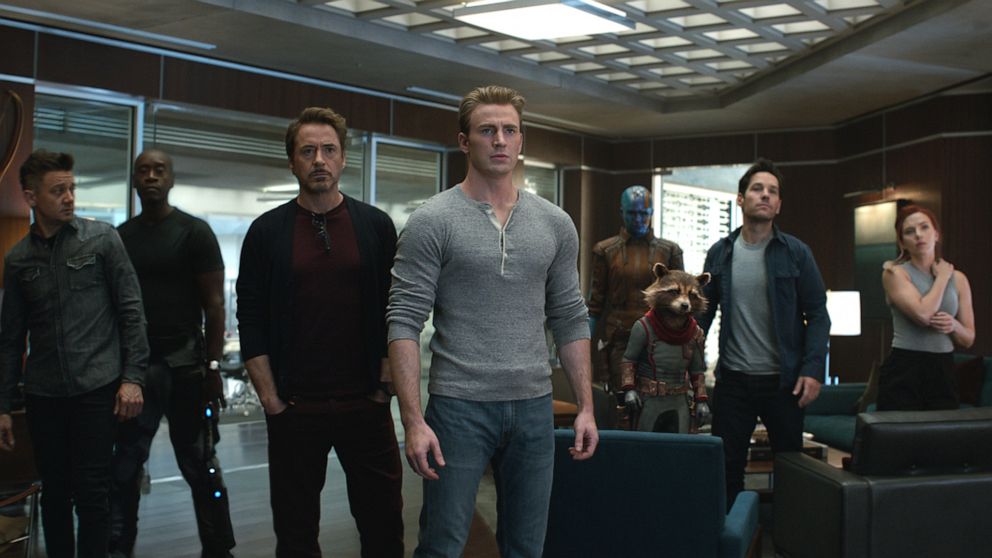 Peter Travers: How do you decide in "Endgame" who's going to live and die, who is going to survive?

Anthony Russo: Our goal for this movie was to end the run that began 11 years ago with the first "Iron Man" movie. So we looked at every one of those characters.

We looked at their arc that they'd been on through all of the films and we just started to think about what was the most satisfying climax for each of those characters on an individual level. 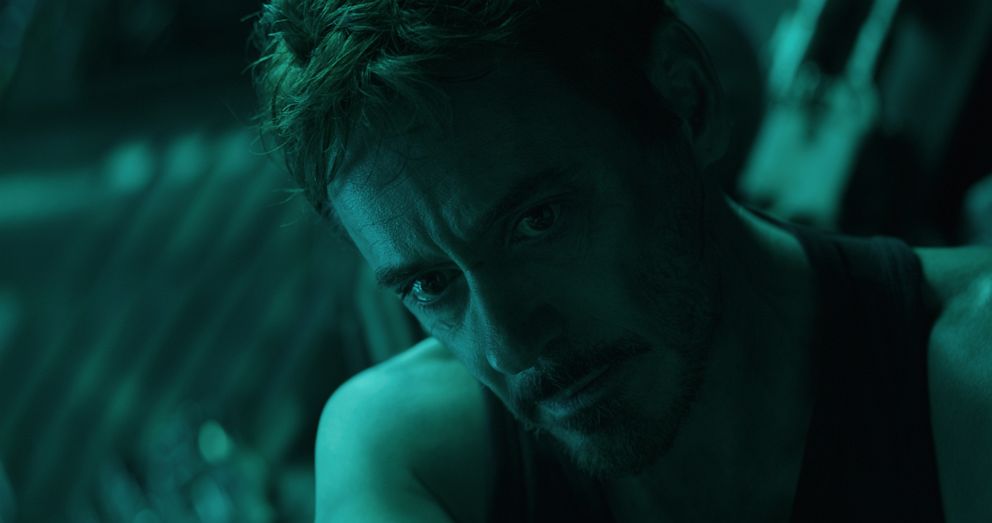 Peter Travers: The amazing thing about Iron Man is that in the beginning of all this, he's such a cynic, until he builds to some kind of self-sacrifice.

Anthony Russo: Even though he dies in this movie, this beloved character is now leaving the movies, because it's the completion of the arc for this character, because it's sort of a movement from selfishness to the ultimate act of selflessness and self-sacrifice.

And yet he's giving up a lot by making this choice. His wife, his daughter are so important to him. There is sort of a beauty and a nobility and an uplift in his decision to do that and hopefulness.

Peter Travers: There's a memorial service in the film where we see a lot of Avengers. Was that thing shot in one [take]? You really had all of those people in one place?

Joe Russo: We did. It was a one-er, and we got them all for about two hours.

Anthony Russo: It was probably the most rehearsed shot we have ever executed.

Joe Russo: We rehearsed it the day before with stand-ins.

Anthony Russo: You can imagine how hard it was to get all of those actors together. It was a really rare opportunity. It was special because they were gathering for Tony's funeral, we tried to be very secretive in executing the movie about what was going to happen.

So internally, we would always refer to that scene as the wedding, not the funeral, our code word for it. 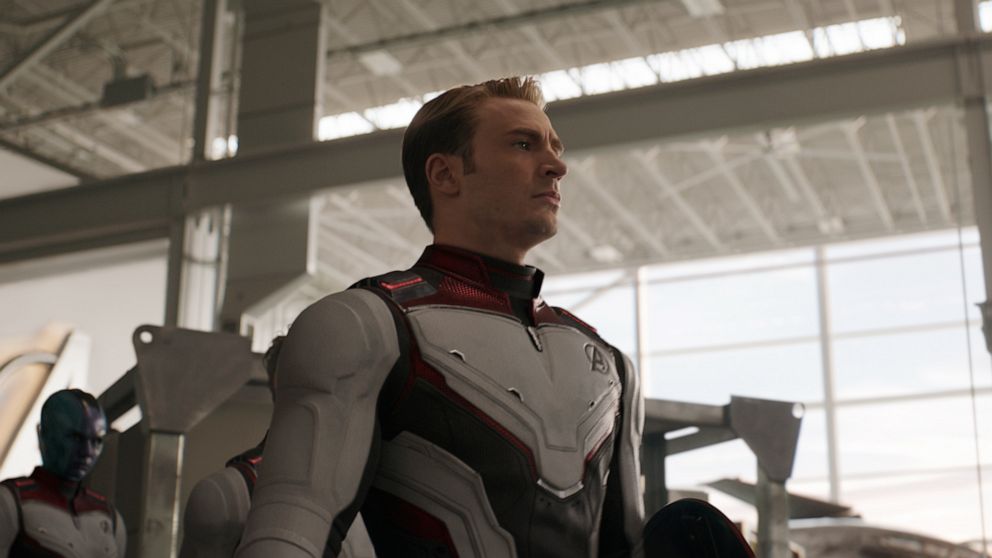 Marvel Studios/Disney
Chris Evans in a scene from "Avengers: Endgame."

Peter Travers: Do you two feel a special connection to Cap [Captain America]?

Anthony Russo: Yeah, we've been involved in such a large piece of his arc. We love the character. One of the exciting things about that character is while Tony Stark has sort of been the whirlwind center of the MCU (Marvel Cinematic Universe), Cap is the co-lead of the Avengers. And he's the co-lead of the Avengers because he's the opposite of Tony. His arc is the opposite of Tony. Cap starts only wanting to serve.

Peter Travers: When you're shooting that kind of scene where you're saying goodbye to a character, are you guys affected by it in the moment that it's being shot? Or, are you too wrapped up in the getting of the shot?

Joe Russo: You feel the gravity of years of storytelling. The last thing that we shot was Robert saying, "I am Iron Man," and snapping his fingers. That was actually the last shot that was ever recorded for the film.

That was certainly emotional because it was Robert, because it was the character's last line, because we shot it it in Los Angeles at Raleigh Studios where Robert 11 years earlier had screen-tested for "Iron Man." So literally the soundstage adjacent to where we were shooting his last scene as Iron Man, the soundstage next door is where he had once screen tested.

Peter Travers: You guys are in that editing room, you're watching this movie hundreds of times, so what can cut through that repetition to you and actually get a tear out of you?

Anthony Russo: One of the scenes, no matter how many times I watched it, it was countless times, when Ant-Man reunites with his daughter after he comes out of the quantum realm, realizing she's five years older than the last time he saw her. That scene always gets me. 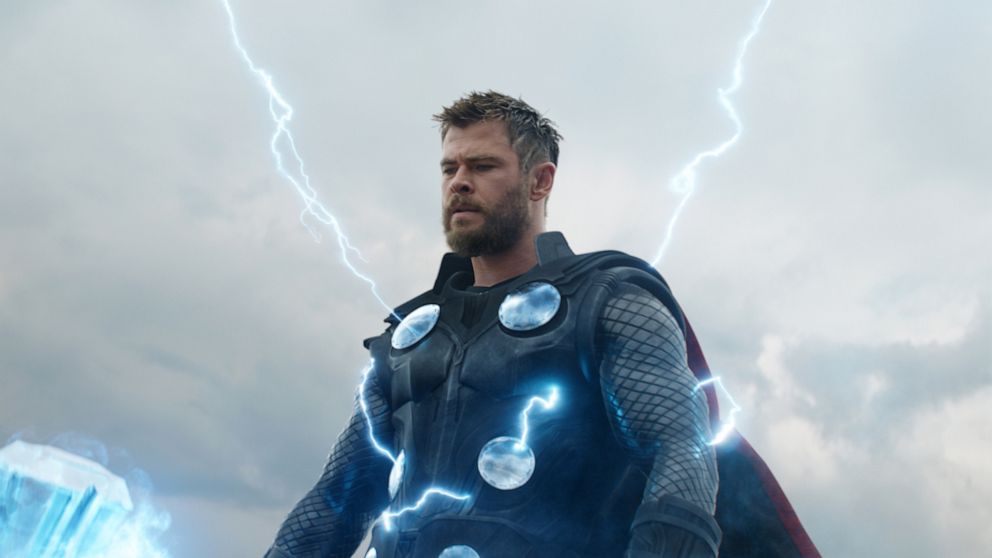 Marvel Studios/Disney
Chris Hemsworth in a scene from "Avengers: Endgame."

Peter Travers: What about Thor? Why did you decide he should be so fat?

Anthony Russo: That was drawn from the very specific road that character has traveled. If you look at his history, arguably no character has suffered more than Thor. His father was killed. His mother was killed. At the end of "Ragnarok," his planet was destroyed. At the beginning of "Infinity War," Thanos kills his brother. He kills Heimdall. He kills many of his people.

He goes on a single minded quest just to avenge them and kill Thanos by the end of "Infinity War." And he fails. He's at a low point. You can't drive that character any lower than that. Sometimes when you're in a place that that's bad, the only way to move forward is humor. 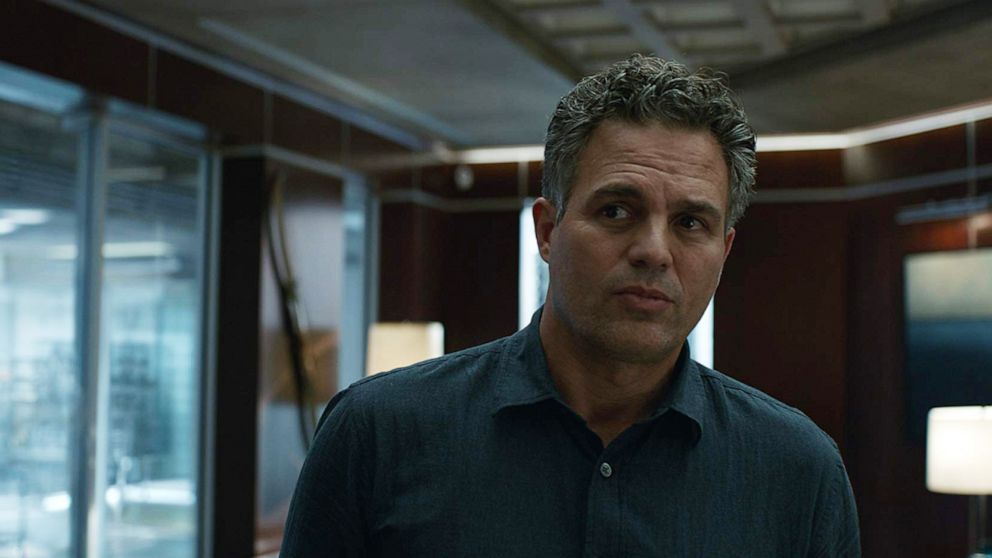 Peter Travers: In terms of the Hulk, we're seeing him as Professor Hulk now. Where does that come from?

Joe Russo: Banner sat around and thought about the fact that two characters were fighting over one host body in a very selfish way. And they could not participate in a healthy way in the fight against Thanos.

So his resolution is to merge them together. And I think that comes from his pain, his grief and his feelings of guilt and regret. 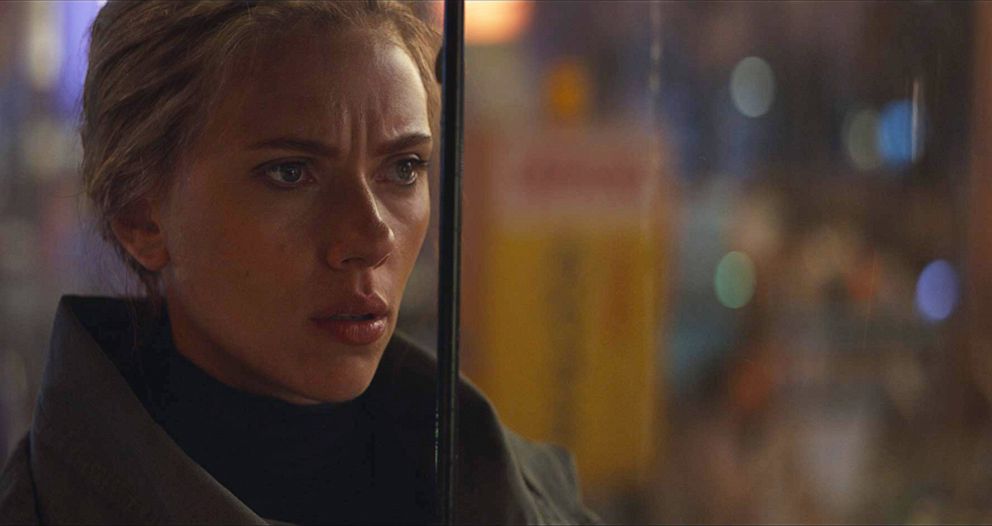 Marvel Studios/Disney
Scarlett Johansson is Black Widow in a scene from "Avengers: Endgame."

Peter Travers: Black Widow, what made you decide to go where you went with her?

Joe Russo: She came out of this culture that you couldn't trust anyone. The only way to survive was to kill your enemies. The opposite of the Avengers. Slowly over the course of the movies, we've been very fortunate to work with her on all four films, because she's an amazing actress.

In "Winter Soldier," she has a relationship with Captain America where she learns from him the value of truthfulness and the value of community and the value of family. And slowly over the movies, she starts to find herself in a leadership role.

And the thing that becomes most important to her, is no longer self-preservation. It's preservation of the community. It's preservation of the family. And that's what she says on the mountaintop at Vormir, she says, "All I've been waiting for for five years was to get to this moment to have the opportunity to bring everybody back." And I think that's a complete arc for her to travel. And we felt like it was an emotional arc as well.

Peter Travers: Is it really the end?

Anthony Russo: It is really the end. There are always new stories to tell for sure. But this was the first Marvel movie that we made where we were not thinking about the future at all.

We were only thinking about how do we complete the story, complete the journey of these six man Avengers and bring a sense of closure to this journey that they've had. Certainly the Marvel Universe is larger than these six characters. And it will find a way forward. But in terms of that journey that we've been on since that first Iron Man movie, this is the end. 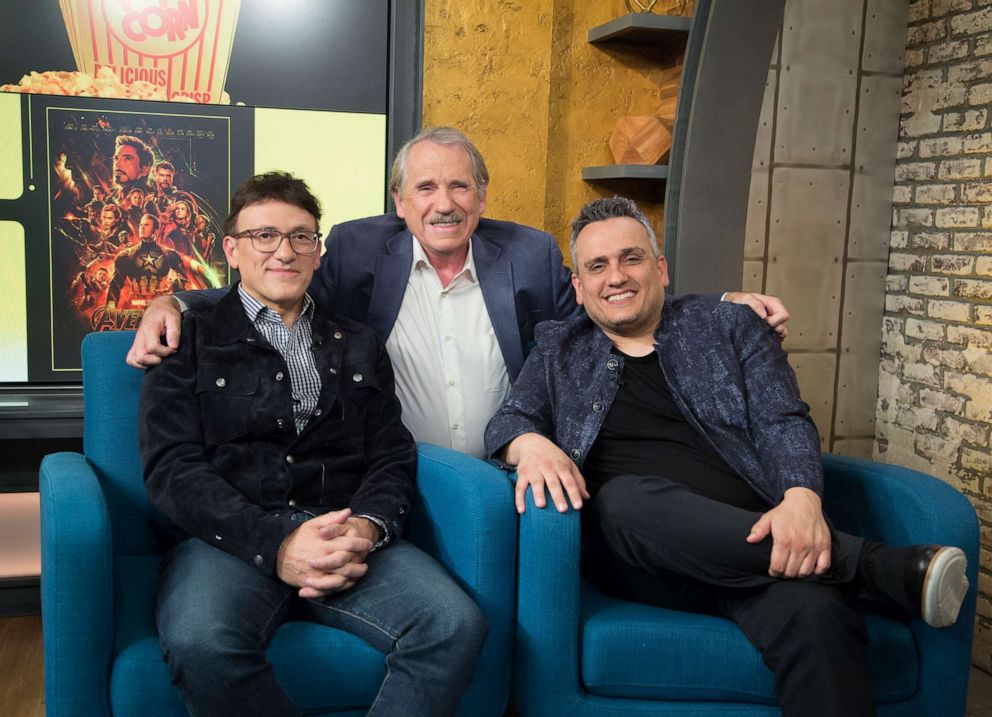 Be sure to watch the full interview with Peter Travers and Anthony and Joseph Russo in the video above.