An 8-year-old boy who spent 1,553 days, nearly half his life, in foster care was adopted Monday in a ceremony that featured a crowd of 300 people, a high school drill team and even Batman.

Nike Schwartz came to his adoptive family at the age of four as a foster child.

"We got a call asking to take him in and we said yes and he showed up at our door at midnight on May 4, 2016," said Nike's mom, Kristi Schwartz, now a mom of three who, with her husband David, has been a foster parent for 11 years.

"You see these kids in their most rawest form and you just feel this maternal instinct to want to provide that stability for them," she said. "For me and Nike, it was pretty quick that I knew that." 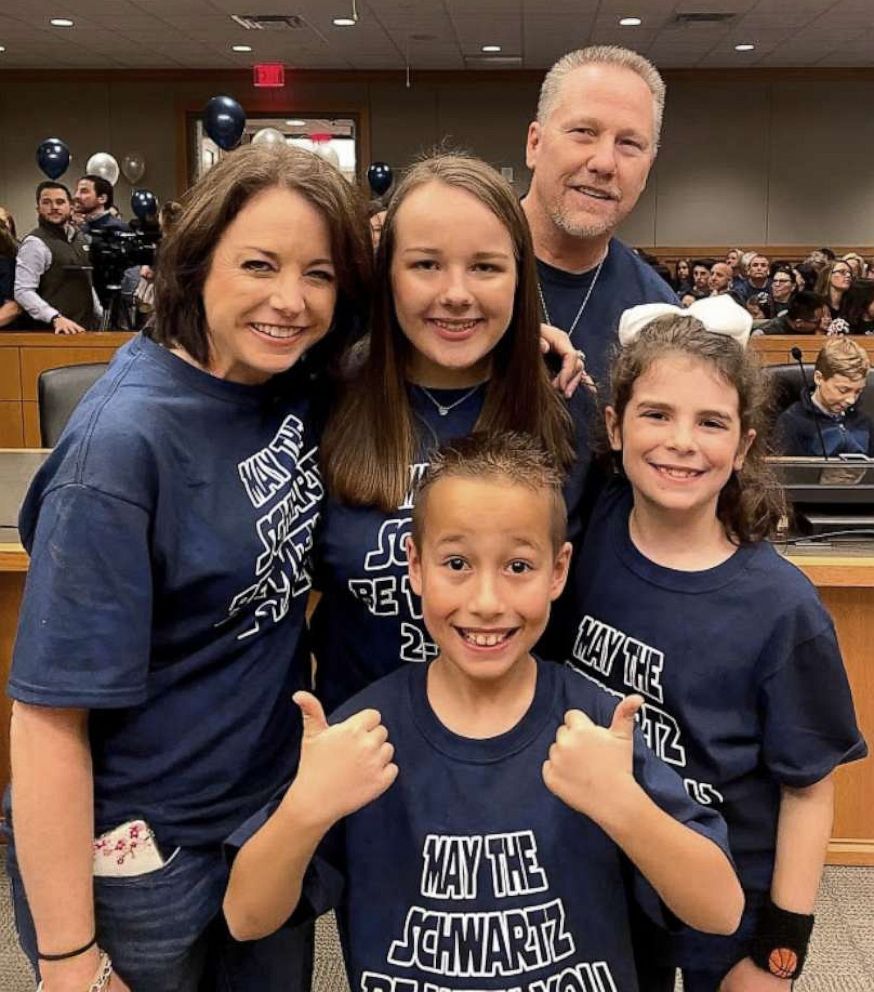 The Schwartzes, of Allen, Texas, also have a 17-year-old biological daughter and a 10-year-old daughter they adopted less than a year before welcoming Nike, who spent nine months in foster care before arriving at the Schwartzes' home.

The couple had not planned on fostering more kids until they were contacted about Nike. They were told at the time that his family placement options had been exhausted and the next home he was placed in would need to be an adoptive home, according to Schwartz.

MORE: Family fosters siblings then discovers they're having twins

Nike's biological parents' rights were terminated in 2017, but his adoption would take another two years to happen because of legal appeals made by his biological family.

The Schwartz family found out late last year that Nike's adoption had gone through and he would legally become a part of their family on Feb. 17. 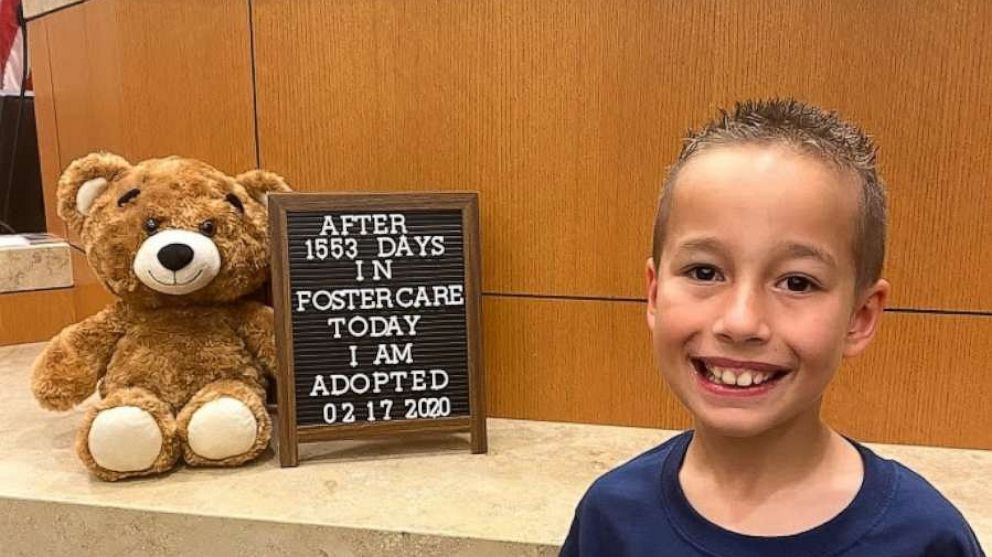 Buckner International
Nike Schwartz, 8, was adopted by the Schwartz family on Feb. 17, 2020.

To celebrate the end of four years in foster care, the Schwartzes wanted to make Nike's adoption day extra special.

They had t-shirts made that said "May the Schwartz be with you" and featured Nike's adoption date, 2-17-20.

MORE: Couple keeps 6 siblings together through adoption: 'There's lots of love and chaos'

The family also invited 300 of their family members, friends and adoption officials who have been with them throughout the journey.

Also in the audience to watch Nike get adopted were his favorite superhero, Batman, more than two dozen of his second-grade classmates and his older sister's high school drill team, who cheered Nike on with pompoms. 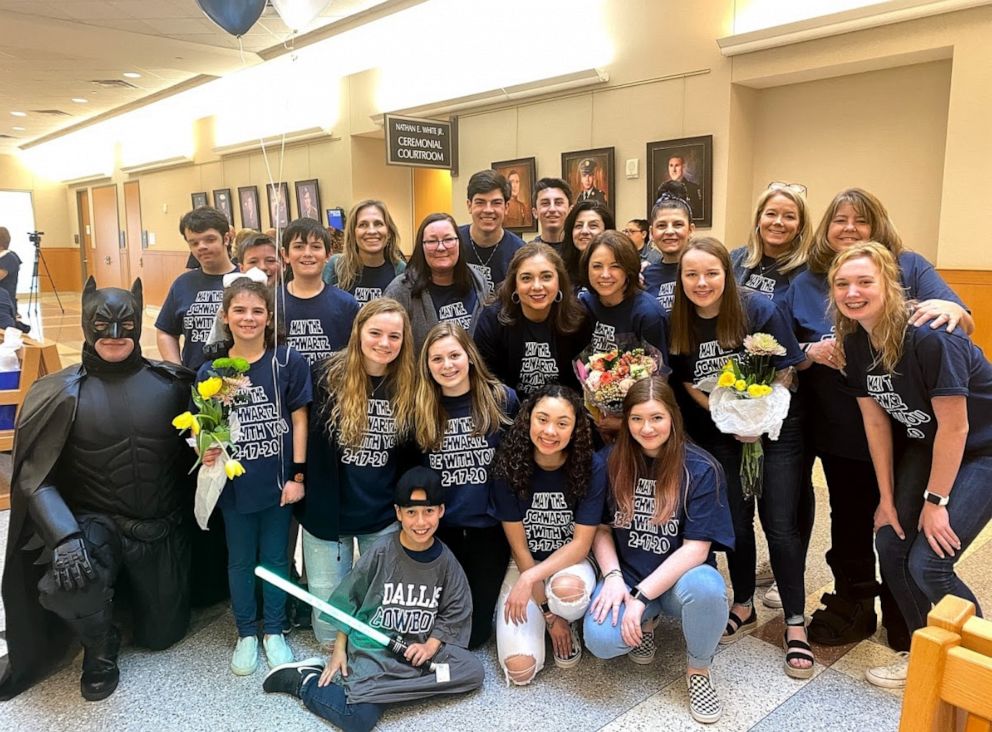 Buckner International
Nike Schwartz, 8, center, poses with a Batman character and family and friends on his adoption day, Feb. 17, 2020.

"It was just overwhelming. I can’t think of a better word for it," said Schwartz. "It was unbelievable to see everyone who came out and supported our family and who have supported us through all of this."

Schwartz and her husband were supported on their journey as foster and adoptive parents by Buckner International, a Christian, non-profit private adoption agency that contracts with the Texas Department of Family and Protective Services.

The agency knew that Nike is a huge Dallas Cowboys fan and surprised the family at the adoption with a gift basket from the Cowboys that included a football signed by the 2019 team.

"That was probably the highlight of his day," Schwartz said of the surprise for Nike, who also loves playing soccer. 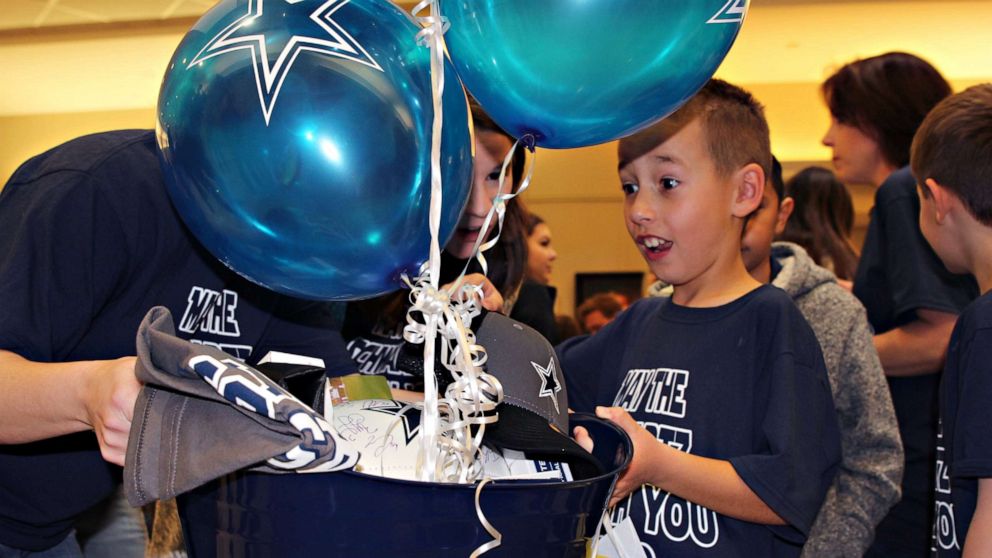 Andi Harrison, program director for Buckner International in North Texas, attended the adoption and said there was not a dry eye in the courtroom.

"It’s just heartwarming to see how much love people had not only for Nike but for the entire family," she told "GMA." "It brought tears to your eyes to see that it’s all finished and he can move forward and be comfortable knowing that no one is going to remove him from that home."

Nike Garza has been in #fostercare for 1,553 days (half of his life), and today he was #adopted by his forever family. Thank you to the @dallascowboys for making Nike's #adoption day even more special! #HopeShinesHere pic.twitter.com/ktpjrNrnlY

Harrison said the adoption was even more special because Nike, as an 8-year-old, represents a large need in the foster care system.

"There is a desperate need of homes for children who are over 8-years-old, for larger sibling groups and for children with bigger needs," said Harrison. "We are desperately looking for additional foster care parents that will not only provide short-term care but long-term care." 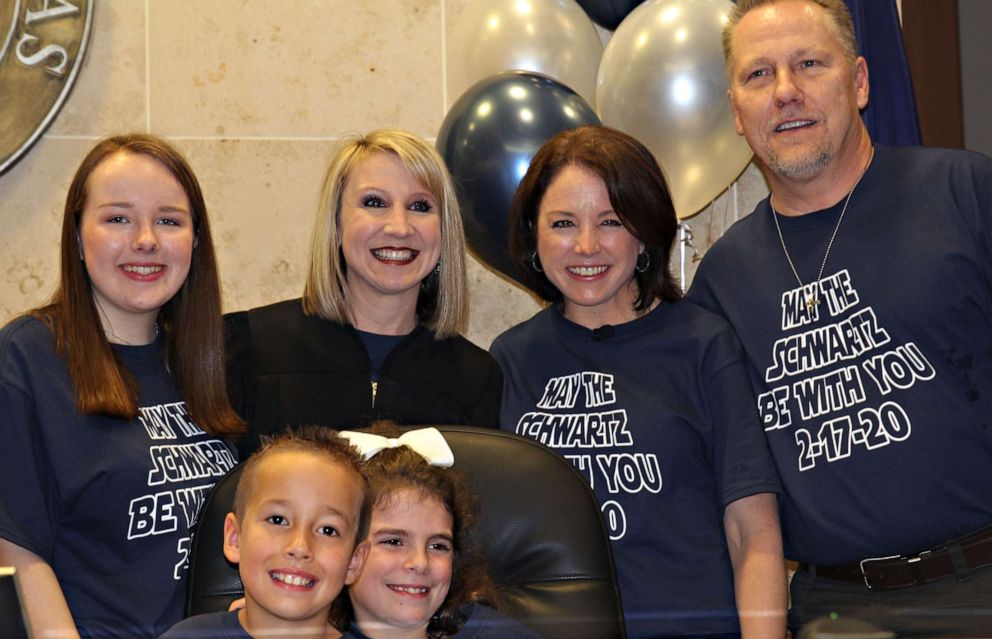 Buckner International
Nike Schwartz, 8, center, poses with his family and judge on his adoption day, Feb. 17, 2020.

"We really just need families that stand in the gap with these children and are there for them, whether it’s 30 days or something long-term like adoption," she said. "There’s a lot of fear in the unknown but when you work with professional organizations or agencies in your local area, they know how to train you and prepare you, so don’t let fear stop you from loving on our children."

Schwartz acknowledged that her family's own transition with Nike "took a little bit" of time as he adapted to their family's stability and reached new developmental milestones. Now the family can't imagine their lives without each other.

"He has just turned into this kid who is so easygoing and such a positive little force," said Schwartz. "He has a ton of friends. Everybody loves him. He’s just a great kid."