Four little girls with big hearts are raising money in hopes of paying for the adoption of their fifth sibling.

Susanna, 11, Mary Anson, 11, Eleanor, 7 and Evelyn Tate, 4, have earned $1,200 from their bracelet crafting business adorably titled, Bracelets for a Baby. The sisters came up with the idea after learning their mom and dad always wanted to adopt.

"My husband and I have been praying about it for about a year and just started casually mentioning to the girls and they got so excited," mom Sidney Tate of Brookhaven, Mississippi, told "Good Morning America."

"They wanted [us to adopt] right now. My husband told them, 'I'll make you a deal. The inital payment is $4,000 to start the adoption and you girls can help us get that together.'"

Sidney said her husband, Leighton, was trying to appease their daughters' eagerness and had no idea their little project would actually take off. 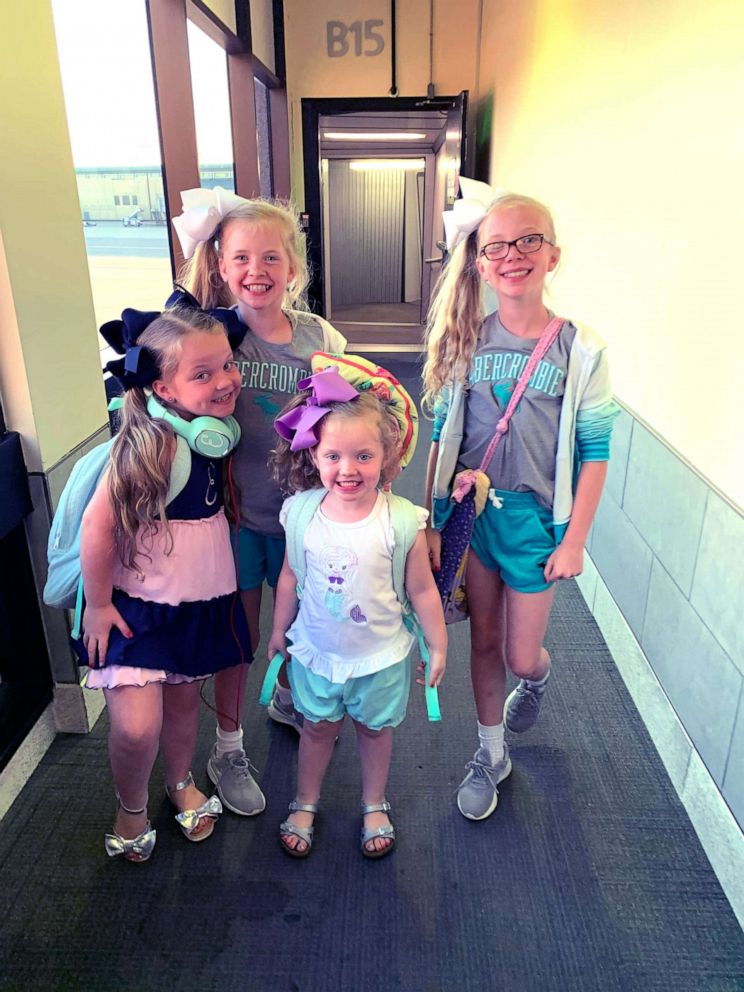 Sidney Tate
Sisters Evelyn, 4, Mary Anson, 11, Eleanor, 7 and Susanna Tate, 11, are raising money in hopes to help pay for the adoption of their fifth sibling.
Editor's Picks
(MORE: Boy gets adopted on the same day his family adopts a dog: 'I was adopted and now I'm ready to do it for him')

"When it first began they brought their little box to church with us and everyone just started buying them," Sidney said, adding that her girls have moved their business in front of her salon, selling bracelets lemonade stand-style. 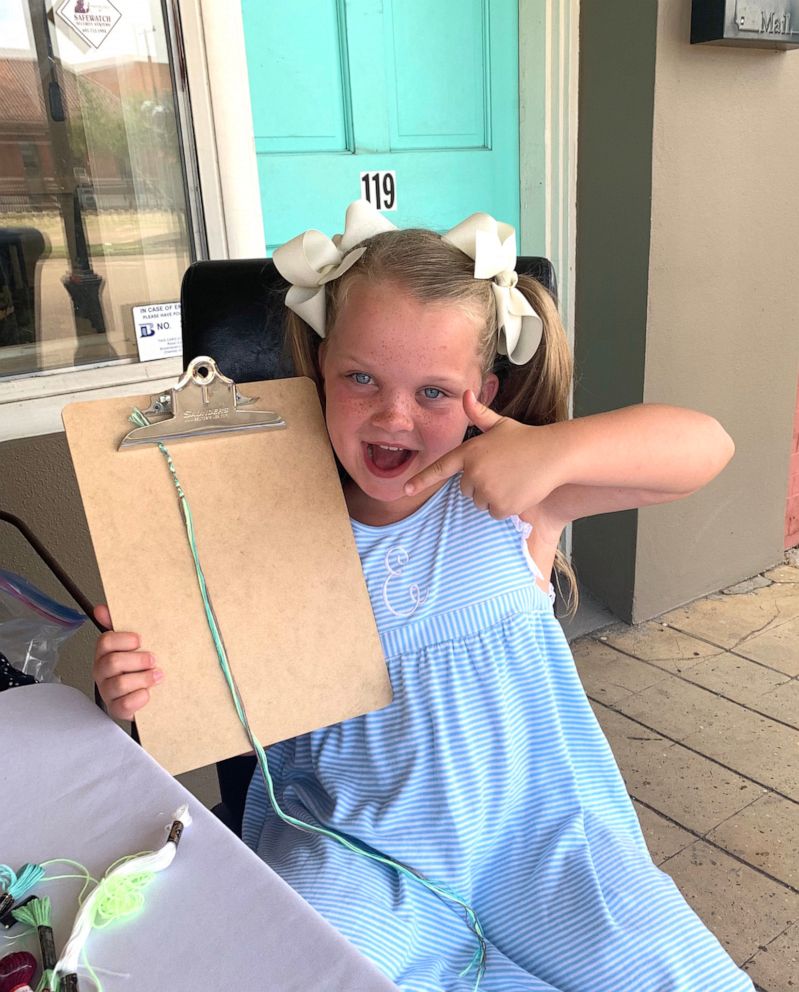 Sidney Tate
Elenor Tate, 7, smiles with a bracelet she made herself.

Susanna, Mary Anson, Eleanor and Evelyn have priced their bracelets at $4 a piece. Anklets are $3 and beaded anklets or bracelets are $8. Customers can choose up to three colors.

As the Tates proceed farther along in the adoption process, Bracelets for a Baby has become a family affair, with grandma and aunts assisting in production. 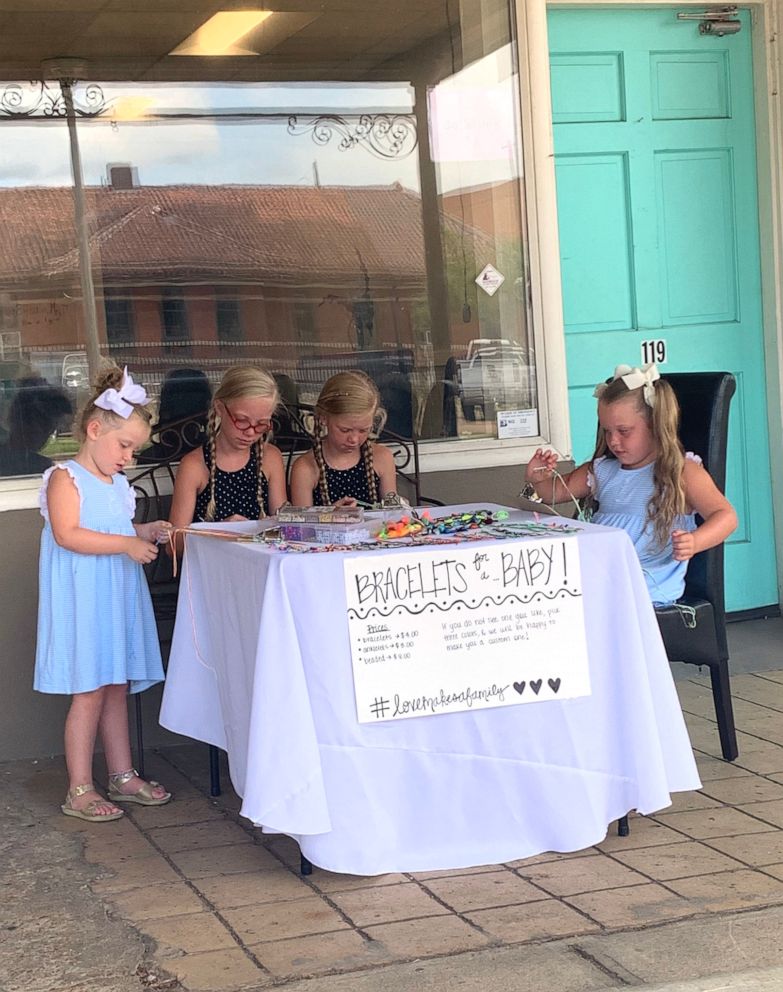 "Of course I jumped [in]," Allison Hudson, the girls' aunt told "GMA." "It really shows how big of hearts they have."

Dad Leighton Tate said he admires his daughters' selflessness in wanting to contribute. 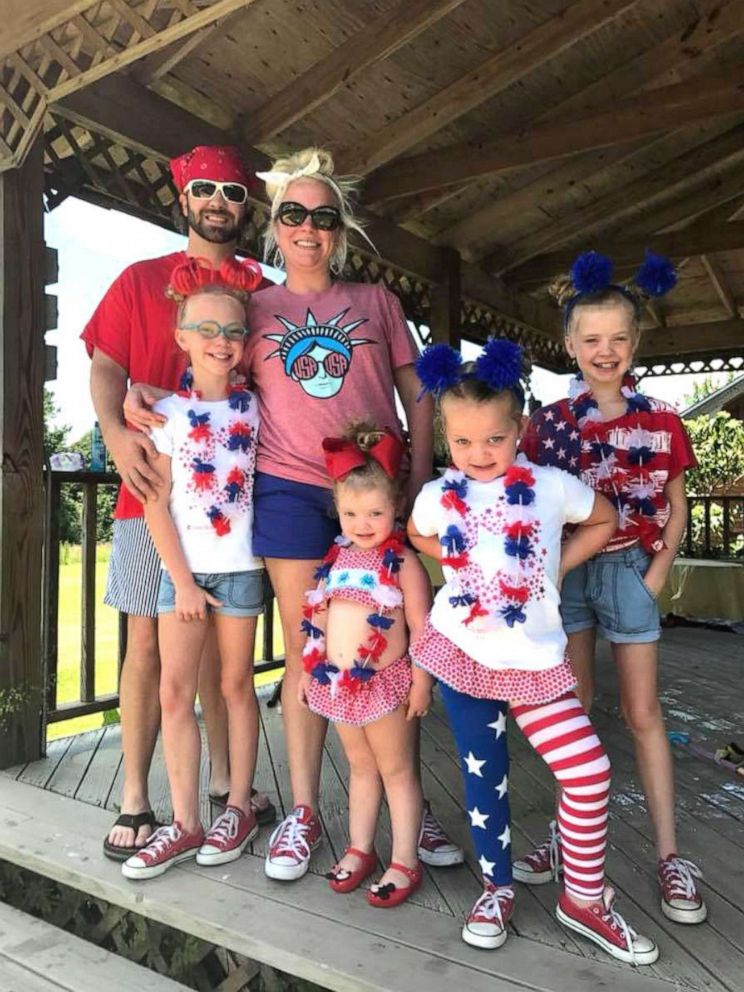 Mary Anson Tate, 11, is looking forward to someday telling her sibling that she played a part in bringing them home. 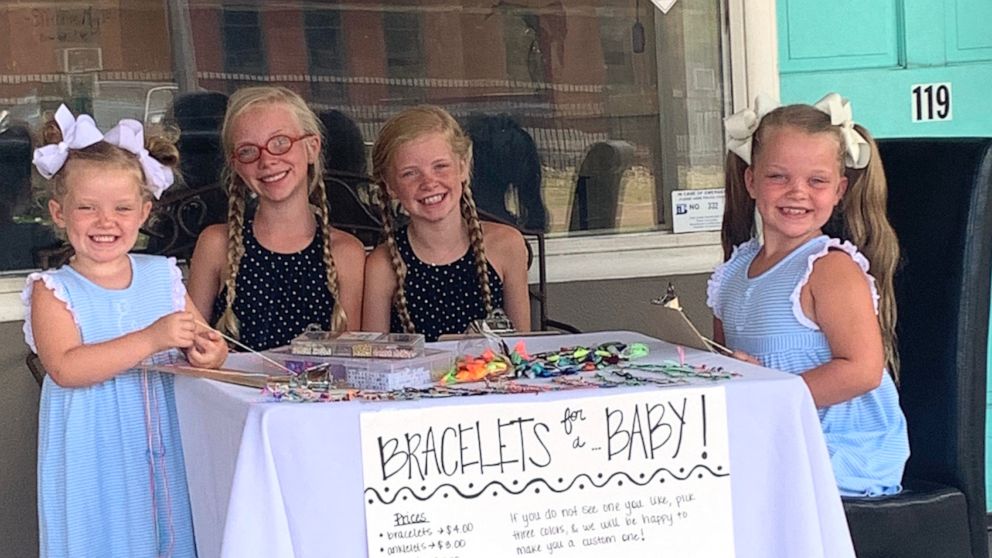 Sidney Tate
Evelyn, 4, Susanna, 11, Mary Anson, 11 and Eleanor Tate, 7, sit outside their mother's Mississippi salon making and selling bracelets in hopes to raise money so their parents can adopt a baby.

"I am so excited to get to tell our new baby that we got to help raise money by making bracelets to adopt him or her!" she said.