A 99-year-old Pennsylvania woman got to meet her 100th great-grandchild in person earlier this month.

It was a once-in-a-lifetime event for Marguerite "Peg" Koller -- also known as "grandmom" to Christine Stokes Balster and her husband Patrick Balster -- who was "absolutely ecstatic" to greet baby Koller William Balster after his birth on Aug. 4.

"We went to grandmom's, introduced her to Koller, who was named after the family name," Stokes Balster, of Lafayette Hill, told "Good Morning America." "...She was absolutely ecstatic. Limited words for sure. She was just so happy and felt so blessed and lucky to be holding him." 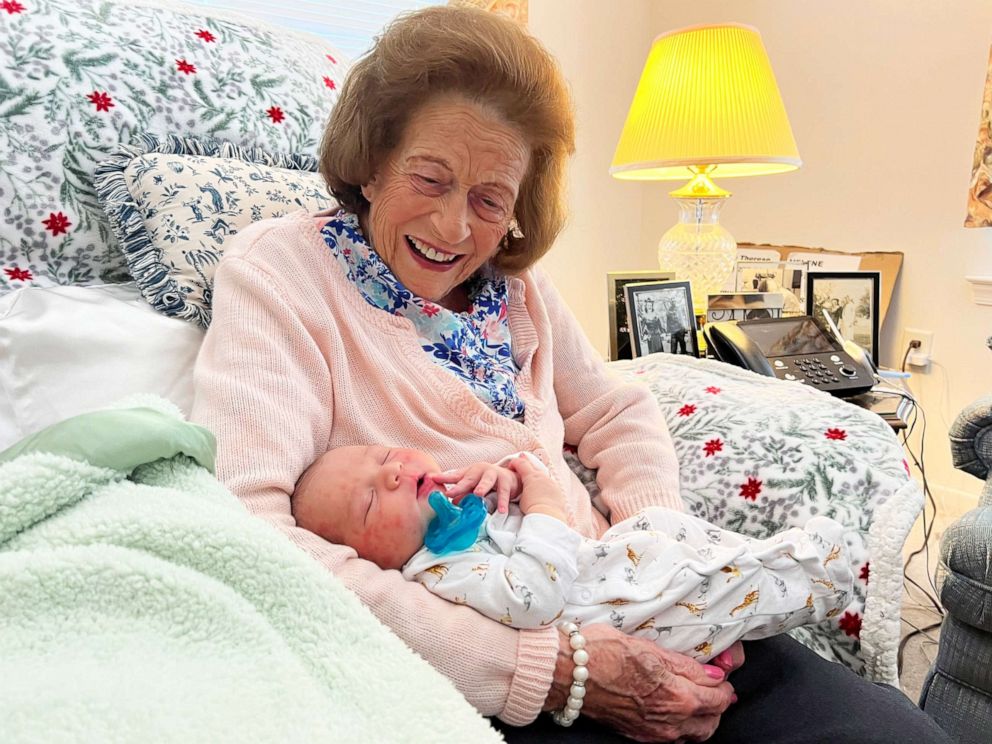 "You could feel the emotion and the gratitude and [she] just felt blessed again that she got to hold yet another great-grandbaby, and this one named after my grandfather," the mom of two added.

In total, the 99-year-old matriarch has 11 children, 56 grandchildren and 100 great-grandkids. Koller was lucky number 100 and arrived a week after his due date, weighing in at 9 pounds, 6 ounces.

"It was a race to 100," Stokes Balster explained. "My cousin Colleen and I were just a day apart [for] our due dates, and she had the 99th great-grandchild, who is absolutely healthy and beautiful. So you know, just grateful, blessed to have another few babies joining this great family." 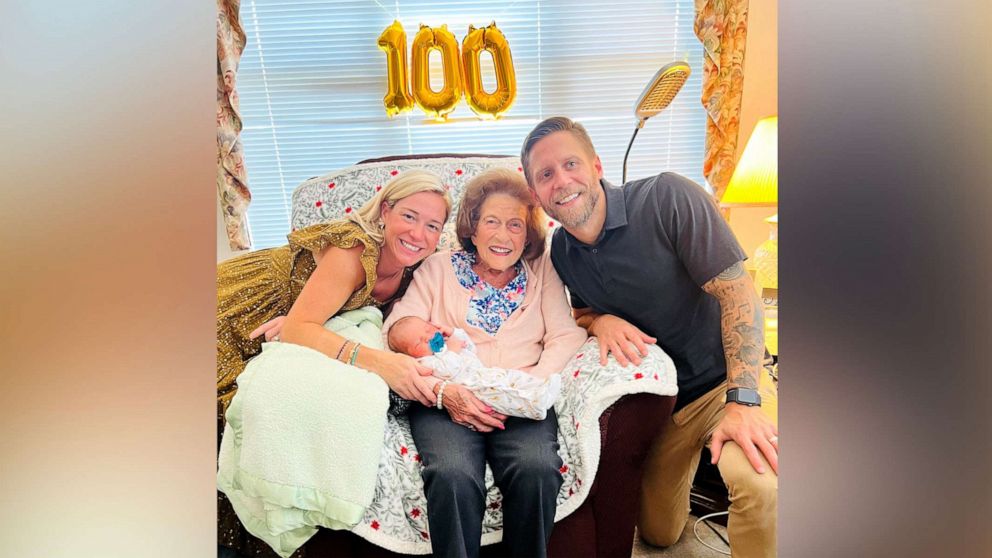 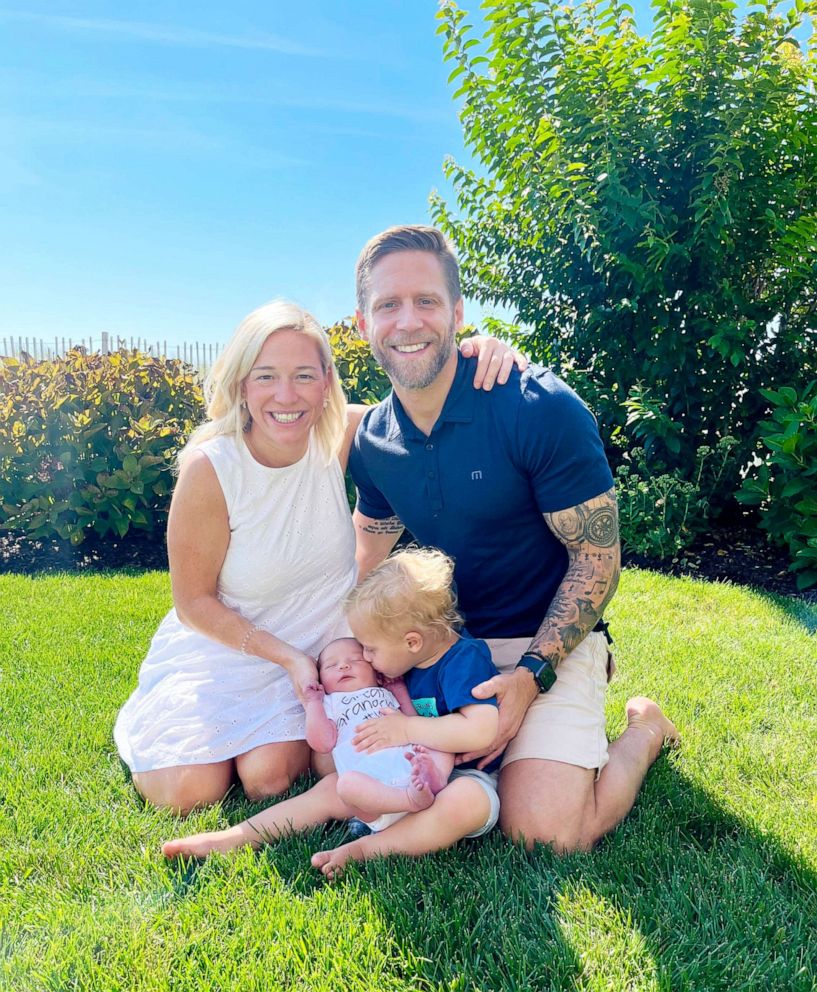 The Balsters said they wanted another name that was just as meaningful for their second son.

"We wanted to do like a name that was equally significant," Patrick Balster told "GMA." "I've always loved the name Cole. And Chris one day was like, 'Hey, how about Koller? This could be baby number 100 for great-grandmom.' We thought about Koller and we went for Koller William ... William Koller was her grandfather's name [Peg Koller's late husband, who died in 2008]. And then 'William' is also on my side of the family, I'm fourth-generation William, middle name. So we're like, it just made sense. It felt good."

The couple kept their baby's name a secret until after he was born. 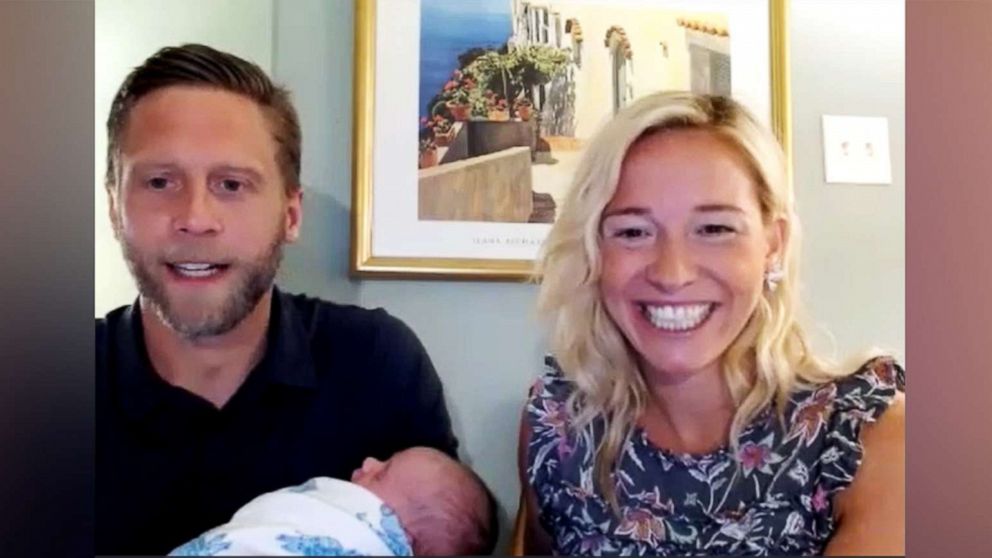 ABC News
Christine and Patrick Balster, who welcomed their second child, Koller William Balster, on Aug. 4, are interviewed by Will Ganss of ABC News.

"I think each one of my mom's siblings -- she's one of 11 -- just felt that it was such an honor to my late grandfather and the family name," Stokes Balster said. "[It was] so much love, so much support immediately once we revealed what his name was, and even more special that he was the 100th great-grandchild. So the timing was just right."

Peg Koller will turn 100 this November and the Balsters are looking forward to spending more time with their family matriarch. They say among the "secrets" to her longevity is working out twice a day and the love and support of their family.

"Faith and family really get her going," Stokes Balster said. "She is present no matter what is going on and however old she is. I mean she never misses a graduation, a baptism, a wedding, a book moment at grade school. Whatever it is, she's always there."