Haruka Kikuchi, a trombonist in a New Orleans jazz band, became the ultimate example of do-it-all motherhood when she went on a two-week tour of Europe with her band.

Kikuchi, 32, could not afford to bring a full-time babysitter on the road with her, so she relied on the kindness of dancers and other musicians on the tour to watch her 9-month-old son Shouta.

And when she couldn't find a babysitter, or when Shouta got fussy and needed his mom, Kikuchi just carried her son or held him in her lap and kept the music playing at stops throughout the tour.

Kikuchi playing with Shouta on her lap at the Herräng Dance Camp in Herräng, Sweden, was captured on video by Mildreds Kompani musician Sofia Enros and shared by her on Instagram.

Thank you @shakeemupjb for bringing the very best music, all the way from New Orleans! You are more than brilliant 🙌🏼💖🎙🎶🎺🥁 We had such a good time, dancing the night away ✨ Wrapping it all up with a seafood after party at @eckerolinjen while cruising home again ✌🏼 . . #shakeemupjazzband #herrang2019 #herrängdancecamp #herrangdancecamp #hotjazz #neworleansmusic #neworleans #louisiana #seafood #shrimps #jazzbaby #swingkids #swingkid #IlseEnros

"Everybody smiled at my baby, and my baby is such a happy baby that he smiled to everybody," Kikuchi told "Good Morning America." "I felt so much better during the tour with him there."

The musician said she and her husband weighed whether she should take their son with her on the tour, her first since giving birth, that included stops in the U.K. and Sweden. They ultimately decided the best option for all of them was for mom and son to be together.

"If I bring him with me, I feel so much better because I can take care of him," Kikuchi said. "He's fine and he feels safe with me."

Kikuchi is the only mom in her six-person band but said she received full support from her all-female Shake 'Em Up Jazz Band mates.

"It's like he has five aunties," Kikuchi said. "Everybody helps me on and off the stage."

Kikuchi said she had no trouble balancing her son and her instrument because she has been playing the sliding trombone for nearly 20 years. She continued to perform right up until her due date, too. 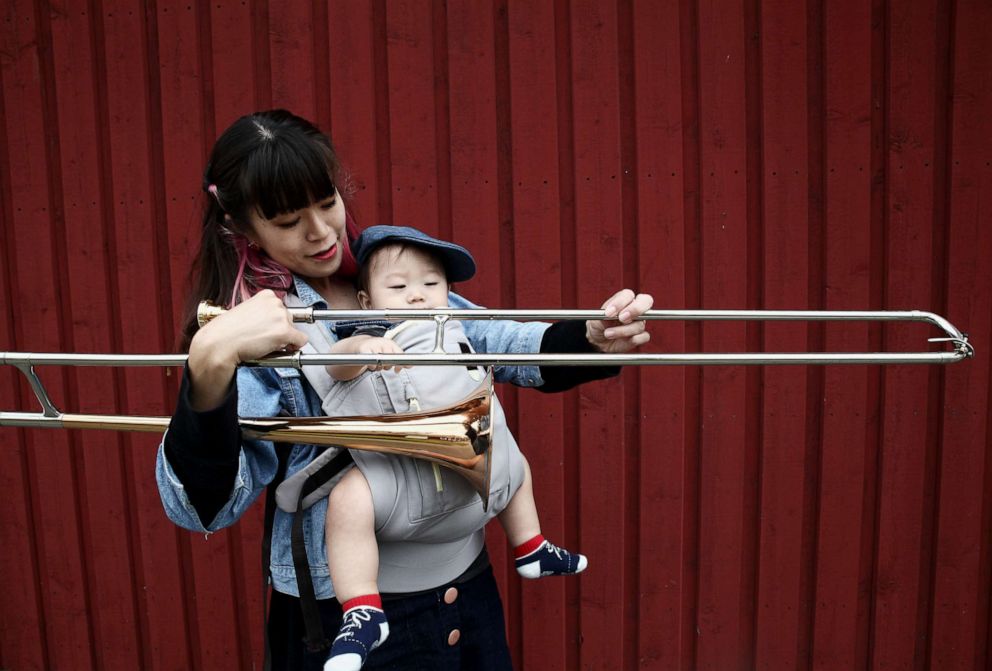 Shouta wore headphones while on stage and slept through most of his time in the spotlight, according to his mom.

Though this tour of Europe marked his first time on stage in his mom's lap, it may also mark his last.

"I feel like this just happened this once because he is so ready to walk," Kikuchi said. "For now it's fine, but I don't know when he starts walking."