Every mom knows the fear of being "those people" on a plane with a screaming baby. But for one Illinois mom, the compassion of a flight attendant alleviated all of her stress after he carried and calmed down her crying baby during the little girl's first flight.

Ashley Dowell of Rockford, Illinois, said she was flying to Disney World with her family -- husband, 7-year-old, 4-year-old and 9-month-old -- late last month when her then-baby daughter, Alayna, started screaming and crying shortly after take off.

"We’re feeling like we’re those people on the plane with the baby that's crying and everyone wants to kick you off the plane," Dowell told "Good Morning America," adding that she and her husband tried everything they could to calm her down.

"You would get the people who would look at us sympathetically but then they were like, 'Oh my gosh is this baby going to stop?'" she added.

Editor's Picks
(MORE: This dad interviewed his daughter on her first day of school for 13 years and we're crying)

After about 15 minutes, she said a flight attendant on their Southwest Airlines flight came by and held Alayna when they first got on the flight as she put her bags away, and offered to help hold her again. 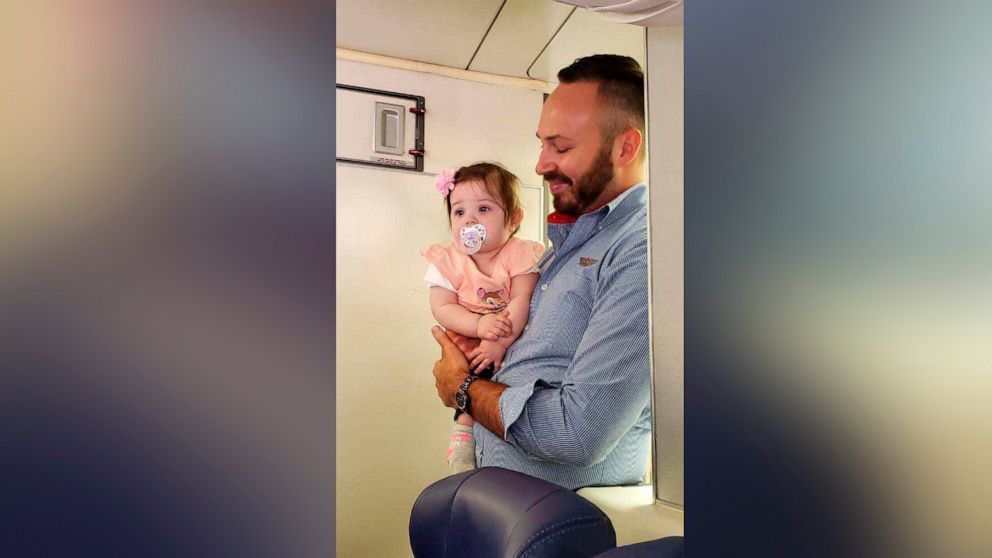 "We were in such a small, confined, area, we were really desperate," Dowell said. "He was so good with her, and so nurturing and caring and pretty instantaneously, she calmed down."

Dowell said he walked her up and down the aisles for about 15 minutes until little Alayna calmed down.

"He was rubbing her back, walking up and down the aisle like it was just a day in the park," Dowell recalled. "Once he calmed her down, he handed her back to us and then we were able to get her back to sleep." 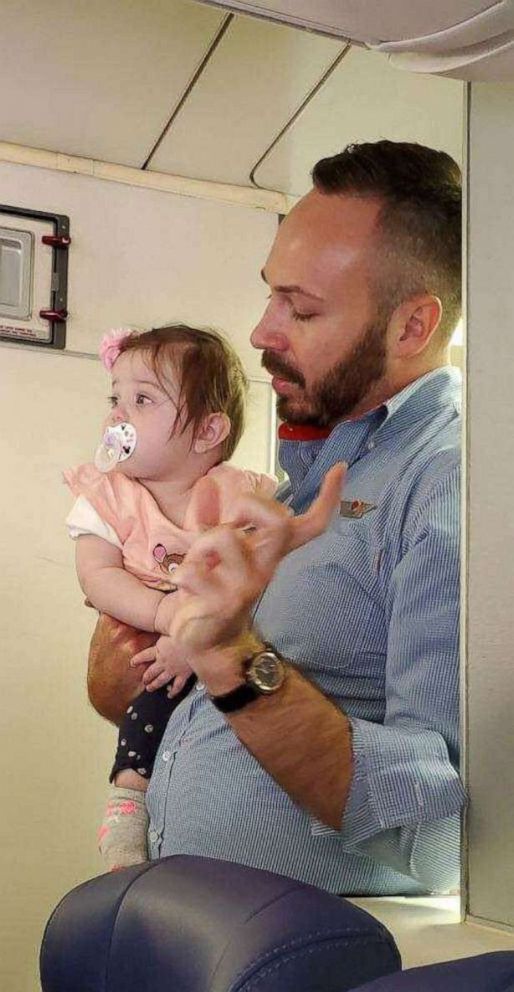 "Normally people will offer to hold your baby when they’re not crying, but when they start crying they will usually try to give it back," she added.

Dowell said she snapped a few photos and a video of the incident to show Alayna when she gets older. She also shared it on Facebook, where the random act of kindness soon went viral, garnering over 12,000 views.

"There’s just so much negativity in this world," Dowell said, adding that the flight attendant was a much-needed reminder that "there are good people out there." 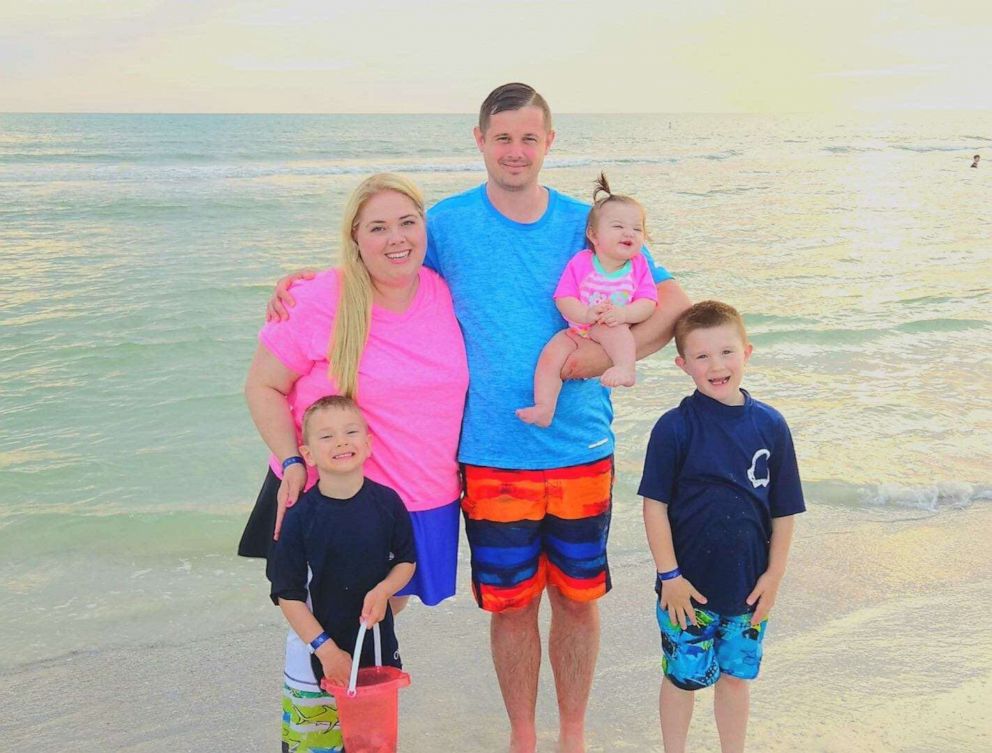 Courtesy Ashley Dowell
Ashley Dowell is pictured here with her husband, Will, and their children.

On Facebook, Dowell later connected with the flight attendant, Wesley Hunt, himself.

Hunt said when he saw the family coming on the plane, he noticed "they were struggling a little, dad was busy toting car seats, mom was toting bags."

After the flight took off, "Poor little Alayna was just screaming her head off, they could not get her to stop," he added.

Hunt said he carried Alayna and played with her up and down the aisles, adding that he even "made her a little rattler out of some pretzels with a lid on it."

"In a world full of hate, I like to be a shining light to someone who needs it," Hunt said. "I could tell in that particular moment her and her husband kind of needed a little light." 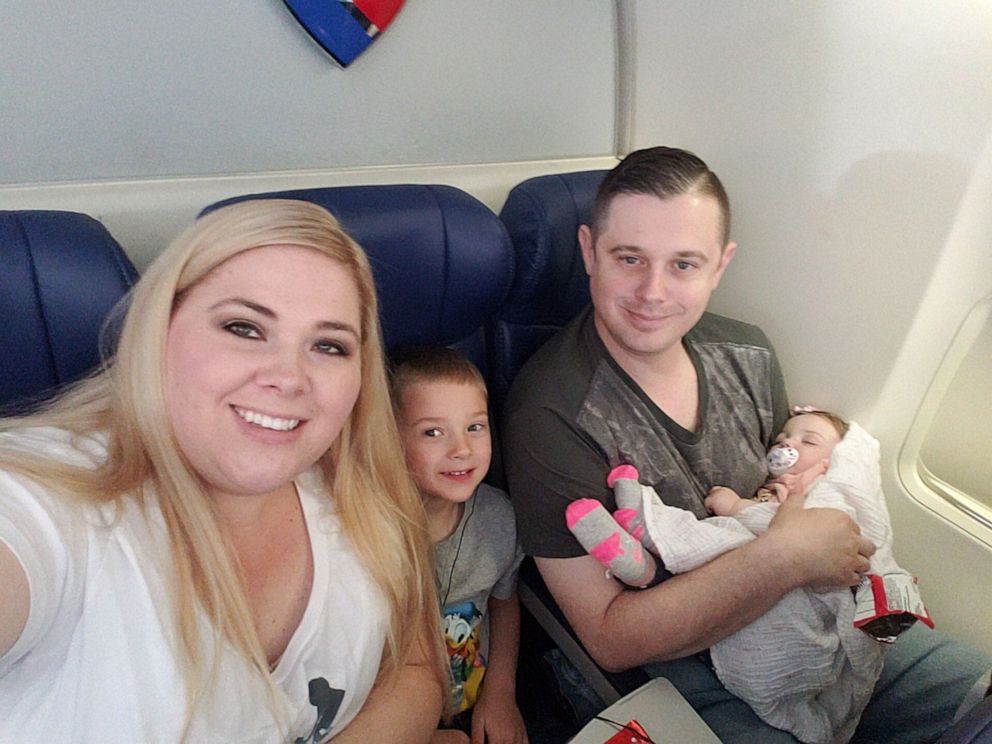 Courtesy Ashley Dowell
Ashley Dowell is pictured here with her husband, Will, and their children during their baby daughter's first flight.

"I knew they felt a little embarrassed because people were staring at them, like, why cant you make the baby quiet," he added.

"I usually don’t just pick up peoples kids, some people are like 'stranger danger,' like don't touch my kids," he quipped, but added "I just try to do what I can to help."