At the end of this school year, a family of four from Austin, Texas, plans to uproot their lives and move over 2,000 miles away to Portland, Oregon.

The family, native Texans, say they are moving because they fear for the safety of their 10-year-old transgender daughter in the wake of Gov. Greg Abbott's decision in February to direct the Texas Department of Family and Protective Services to investigate reports of gender-affirming care as child abuse.

"Our house is halfway packed in boxes," said the mom, whom ABC News is identifying under the pseudonym, Marin, because she asked that her name not be used for privacy reasons. "[My kids] are sad to leave their friends ... but they know where we're moving, my daughter will be able to play on the sports team of her choice, with the girls. She will never have a problem using the girls' restroom."

"We want our kids to have the opportunity to grow up in a place where they can just focus on being kids, and that's something that Portland can provide," she said.

Marin was among a group of moms who publicly advocated for transgender rights during the Texas legislature's last session, testifying at the Texas Capitol and ultimately helping to defeat dozens of bills targeting transgender people. When Abbott announced the directive in February, she thought her family would stay put and continue to fight in Texas, but she said the threat became too great.

"With the situation as it is, I'm not fighting effectively," said Marin. "You can't fight when you're down on the ground, just trying to fend people off of your children."

According to the Texas Department of Family and Protective Services, at least nine investigations have been opened on families since February, when Abbott and state Attorney General Ken Paxton issued their opinion on transgender care, calling gender-transitioning or affirming procedures for minors "child abuse."

The Texas Supreme Court is expected to rule soon whether the state can resume the investigations. In March, a district judge blocked state agencies from investigating gender-confirming care as child abuse, issuing a temporary injunction after hearing from the parents of a 16-year-old transgender girl who were under investigation.

Gender affirmation is when transgender people make changes to their lives in accordance with their gender identity, according to the Centers for Disease Control and Prevention. That can be done through a change of clothing, hairstyles, mannerisms, names and pronouns.

Gender affirmation can also come in the form of hormone therapy or surgeries to alter one's physical characteristics.

In anticipation of a regulation like Abbott's, Camille Rey said she made the decision to leave Texas last summer in an effort to protect her 9-year-old son Leon, who is transgender.

During the past legislative session, Rey said both she and Leon testified against anti-transgender legislation. She said she saw Leon begin to suffer mentally and then physically, becoming withdrawn and experiencing stomachaches severe enough to go to the emergency room. 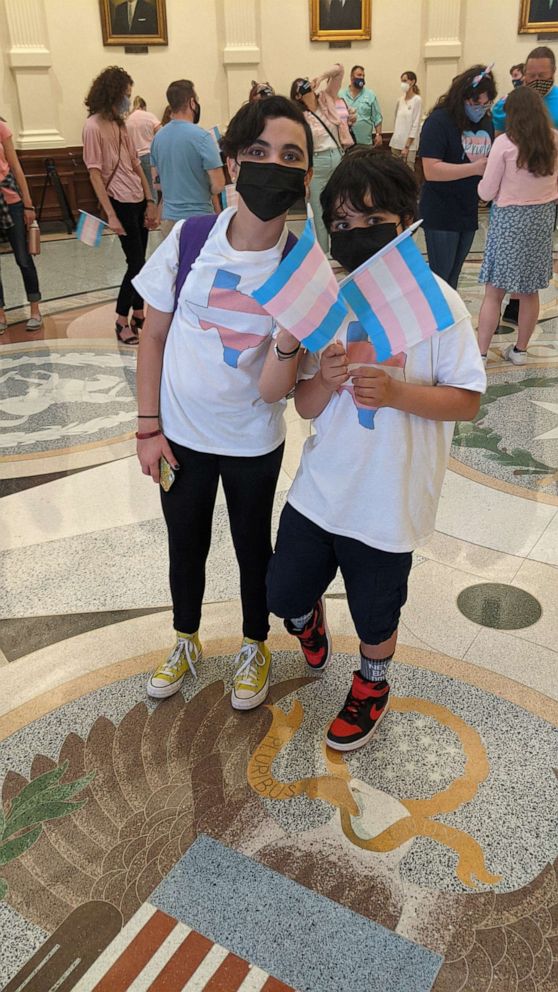 "Unfortunately, he was exposed to a lot of hate in listening to the testimony of people who were for the bills and also just hearing us talk at the dinner table like, 'what are we going to do?'" said Rey. "The teachers from his school called me and were worried about him because they said he used to be the one who made everyone else laugh and now he doesn't really talk."

In August, the family moved to Maryland where Camille said Leon is "much happier."

"Our move was all about being in a place where Leon could just be Leon, so, yeah, we feel protected because there's laws on the books, but honestly, we just need a normal environment and that's what we have here," she said. "It's not that we need anything special for him, just the absence of attack and the absence of threats to our family. That's all we need." 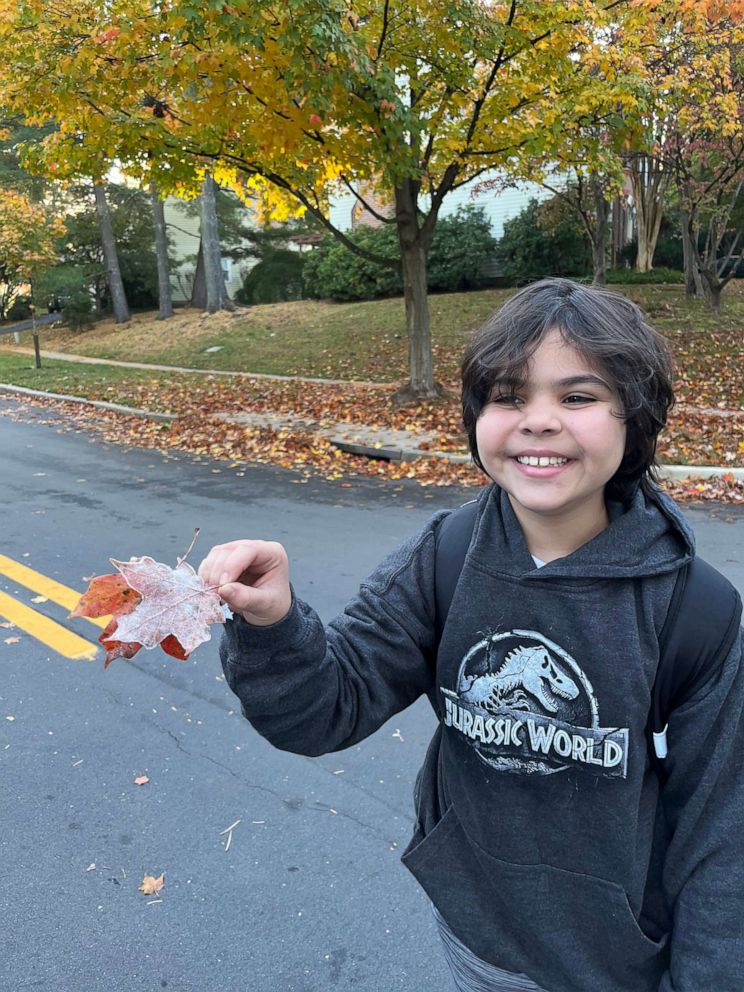 Courtesy Camille Rey
Leon smiles as he holds a leaf.

Rey said that while her family has been met with support in their new home, she worries about families still in Texas.

"I'm heartbroken over these directives coming out of Texas and I know people that I testified with and protested with last year ... some of them leaving, some of them being investigated for child abuse," she said. "And that was my nightmare." 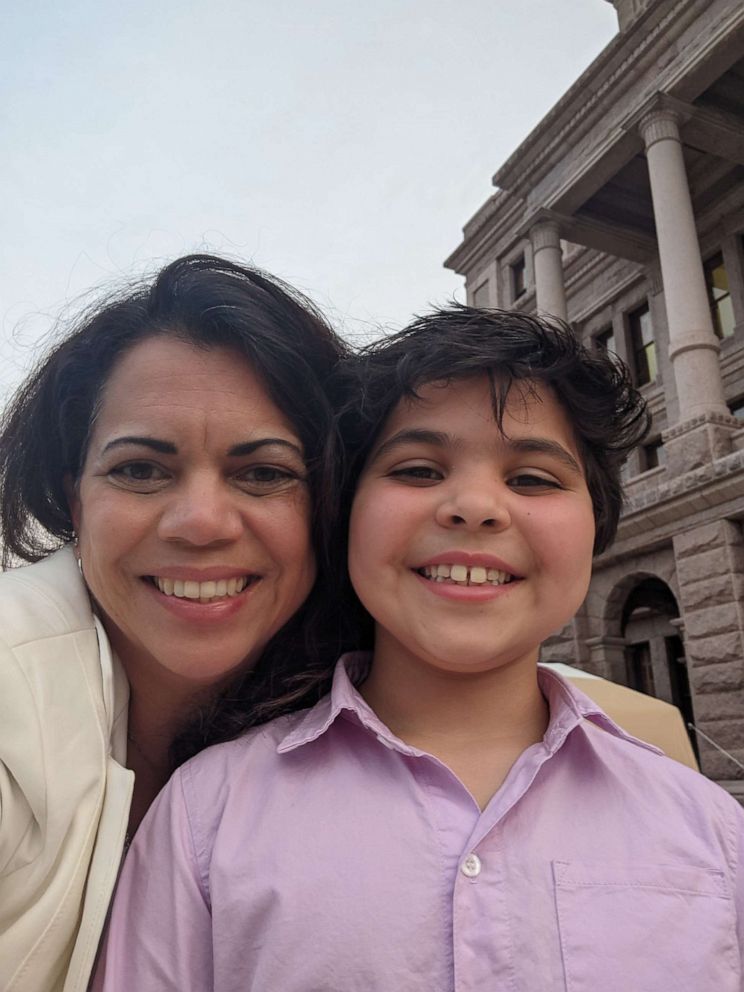 John Pachankis, Ph.D., a clinical psychologist and professor at the Yale School of Public Health who has studied the mental health of gay and bisexual men who move from a country with high LGTBQ stigma to one more accepting, said his research shows that feeling forced to move can be traumatic, but ultimately result in improved mental health.

"Movement away from states with discriminatory laws and policies might lead to improved mental health over the long-term, but in the short term, moving can be highly stressful because of the disruptions and uncertainties associated with moving," Pachankis told ABC News by email. "Our research conducted across 44 countries shows that for gay men who move from homophobic countries to more supportive countries, it takes at least five years before the negative mental health impact of moving from a homophobic country dissipates."

"But thereafter, our research shows that individuals who move to a more supportive location experience lower odds of depression and suicidality because they are less likely to hide their identities and are less socially isolated," he said.

Families staying behind in Texas

Many families of transgender children who remain in Texas may be doing so without a choice due to family or career obligations or because a move out of state is too big a financial burden.

"Most families in the U.S. don't have the financial and job flexibility necessary to move," said Pachankis. "Families with higher income have more ability to move, but when families do move, they likely relinquish the social capital, and possibly even some of the economic capital, that they've accumulated in their hometowns."

Anne, a mom of two daughters in Austin, for whom a pseudonym is also being used because she wants her name to remain private, said she and her family plan to stay put in Texas for the time being despite their fears for their 8-year-old daughter, who is transgender.

Anne shares custody of her older daughter with her ex-husband and said that by moving for her one daughter, she would have to forgo seeing her other daughter for much of the year. A move would also be a daunting financial burden for the family, likely costing them tens of thousands of dollars in addition to she and her husband having to find new jobs and the family having to find a new, supportive community and new medical care, according to Anne.

"I'm having to balance keeping both of my kids safe and happy," she said. "And it takes so much to even consider like, 'Okay, let's go do this all over again.'"

While they remain in Texas, Anne and her husband say they have retained an attorney for their family, and have prepared a safe folder, which contains their daughter's medical records and documentation from health care professionals, family and friends, in case they would be investigated.

I don't know anybody in this community that's okay right now

"I don't know anybody in this community that's okay right now," Anne said of the fear she sees among friends in the transgender community.

Ricardo Martinez, CEO of Equality Texas, an advocacy organization focused on LGBTQ rights, told ABC News there are additional challenges that families of transgender children who remain in Texas could face.

"For people who don't have the means to leave, what does that mean? That they might be incurring additional costs for homeschooling; that they might have to pay more for childcare; that they may have to either quit their job or work a third-shift so that there's always a parent or caretaker at home." he said.

Martinez also said there is also a mental health impact that comes with the fear of investigations for parents and transgender children.

"We are talking about kids not disclosing their identities at school and navigating the world secretly, which is pushing people back into the closet, which we know isn't really great for mental health," he said. "These kids have heard their humanity debated every single day for almost two years."

In Houston, Lisa Stanton, a mom of 11-year-old twins, one of whom is transgender, said she and her husband have decided to stay put for now, but at the same time they are planning an "emergency escape plan" and putting out feelers for job opportunities in states with more protections for transgender children.

"We shouldn't have to leave. This is our home," she said. "We have a network and have built a lot of relationships in this community and we're established in our careers here and our children are established and have friends."

Stanton said she and her husband are closely watching the Texas Supreme Court's decision on the judge's injunction before making a decision about their family's future.

"Our hope is that we will be able to stay and not face any emergent issue where we need to go, but if things don't go the right way with this case, then we may have to reevaluate," she said. "It's really hard because we are just trying to get through life and do all the things you have to do to take care of your family, and it should not be a concern of mine that I would have the government intervening or getting involved in private, personal family medical decisions." 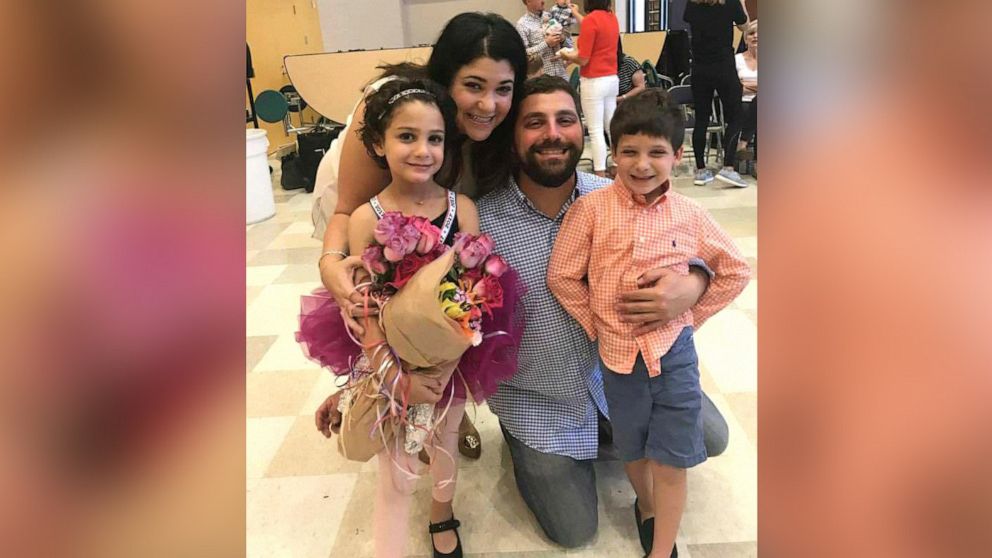 Lisa Stanton
Maya Stanton poses with her family after a dance recital.

If Stanton and her family decide to move, one of the states they are considering is Colorado, one of the top LGBTQ-friendly states, according to the Human Rights Committee's 2021 State Equality Index.

Nadine Bridges, executive director of One Colorado, the state's largest LGBTQ advocacy group, said she and other leaders are working on a resource guide for parents of transgender children in preparation for the influx of families they anticipate could move to the state.

She said that even with protections for transgender youth, there are currently not enough providers in Colorado to meet the demand of kids seeking gender-affirming care.

"That's the other area we're working on, to connect with those providers that are supporting transgender, non-binary and gender-expansive youth to make sure they also know they can reach out to us," said Bridges. "Hopefully we'll be able to find a pipeline to provide support [for parents and providers]."

MORE: Mothers of trans kids react to Texas anti-trans directive: 'It feels like we are being bullied'

In California, a major LGBTQ advocacy organization there, Equality California, is working to advance legislation that would make the state a refuge for transgender kids and families.

The legislation, which will soon be introduced, would prevent the implementation of other states' laws and policies that "would deny trans people life-saving, gender-affirming care" within the state's borders, according to Tony Hoang, executive director of Equality California.

"For us, California has always led the fight for LGBTQ+ equality, including ensuring that trans kids are protected from discrimination and have access to life-saving, gender-affirming care," said Hoang. "We have served as a beacon of hope to LGBTQ+ people everywhere, and we have a responsibility to stand up to hate and injustice no matter where it occurs."