By Haley Yamada
Video by Nidhi Singh
Share —
Sign up for our newsletters to get GMA delivered to your inbox every morning!

"Hair Love" pulled at heartstrings and took home an Oscar for best animated short for the film's portrayal of a black father learning how to do his daughter's hair.

"I was coming across a lot of viral videos about African American fathers that were doing their daughters' hair," director and filmmaker Matthew Cherry told "Good Morning America" in a Jan. 16 interview before his Oscar win. "I just wanted to normalize it and kind of shine a light cause oftentimes black men get a bad rap in not being involved in their kids' lives, and I really wanted to showcase a strong black family unit and show that dads are present."

These dad influencers are sharing their hair journeys with their daughters on social media and trading stories, tips and lessons in Facebook groups, and redefining fatherhood in the process.

Matt Prestbury, founder of the Black Fathers Facebook group, said that he wanted to create a quality space to bring black fathers together where they can talk openly, share stories and give advice. 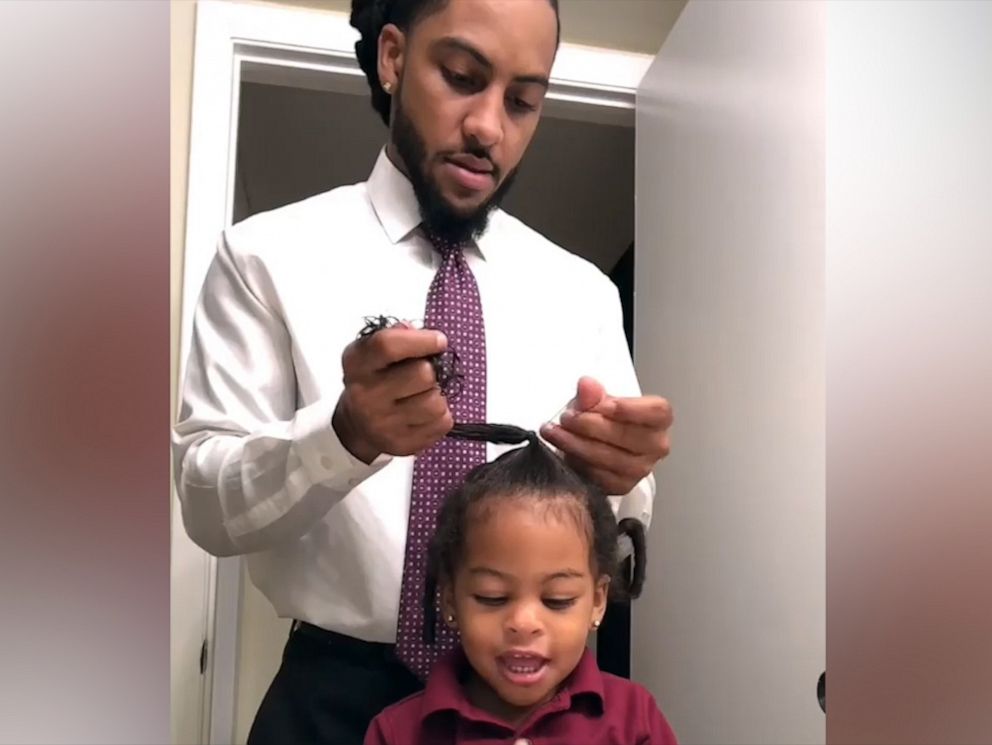 Courtesy J.R. Rivera
J.R. Rivera, a high school teacher in Miami, Fla., does his 2-year-old daughter Azariah's hair in the morning. Rivera has thousands of followers on Instagram where he shares motivational quotes and videos of him doing his children's hair.

Junior Rivera is a high school math teacher, author and motivational speaker from Fort Myers, Florida. At home, he's a single dad to a 4-year-old son and a 2-year-old daughter.

"I have really connected and bonded with my daughter, [by] doing her hair, teaching her how to get dressed, and [how to] say her ABCs, and learn the colors -- all of those things," said Rivera. "[As a 'boy dad'], you already know how to be a boy, you once were a boy. But when it comes to being a 'girl dad,' that is a totally different, delicate approach. … They tug on your heart and make you operate in a totally different manner."

Recently divorced, Rivera said he became a single dad right before his daughter, Azariah, turned 1 and wanted to share his experience with other "girl dads" -- especially single dads.

"It was time to step to the plate: Either learn to do hair or start paying for it or she is going to school and not looking very presentable," said Rivera, who turned to his sisters, aunts, cousins to help. "I'm an ex-professional athlete and knowing that without the reps, you'll never get results that you want. [At first] I had to do her hair over like three or four times, so she had to deal with me being that intensive, just trying to get things right and perfect my craft."

MORE: 'Hair Love': What to know about the Oscar-winning animated film

Eventually, Rivera said he learned the right products and the right brushes to achieve different textures. He said he wants other dads to overcome any gender stigmas and be comfortable doing hair too.

"I am a firm believer that a father is a daughter's first love and if she can't see that I love her beauty and that I love the natural look in her hair … I think I've done a disservice as a father," Rivera told "GMA." "I truly believe fathers have to step into that role early on, and start building them up before this world tries to break them down." 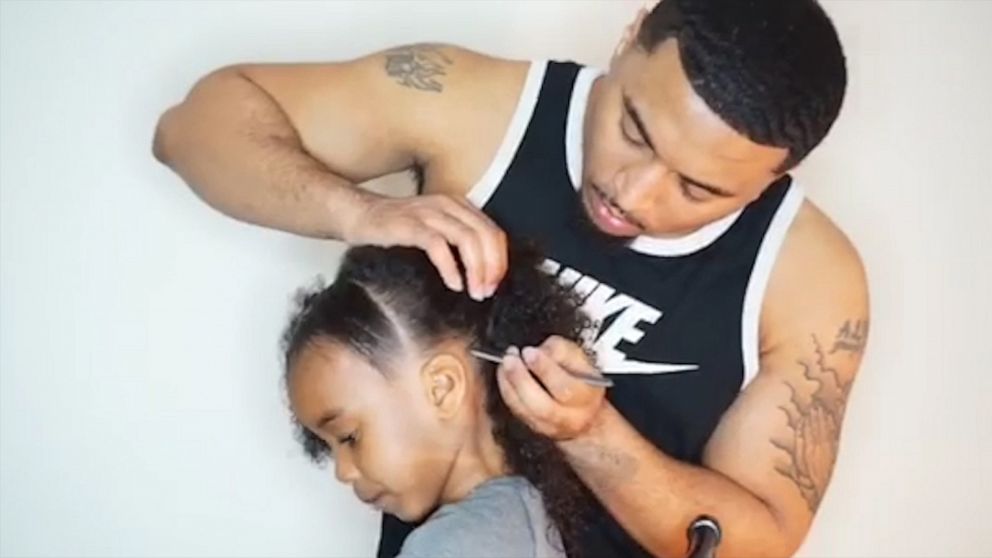 Courtesy Treach Hill
Treach Hill styles his 7-year-old daughter Breeze Hill's hair in Aurora, Ill. The father and daughter have thousands of followers on Instagram where they share videos of Hill doing her hair.

Treach Hill lives in Aurora, Illinois, with his wife and their 7-year-old daughter, Breeze.

He too said he's bonded with his daughter by doing her hair.

"I used to be that guy to leave it to my wife and let her do [our daughter's] hair," said Hill, who started doing her hair at age 3. "Then one day, I was by myself at home and I said, '[Breeze] can't walk outside just looking [like that]. So let me just try to help her out.'"

The moments have been particularly meaningful because Hill lost his own father five years ago.

MORE: A cut above: Why this Delaware principal opened a barbershop inside his school

Although he has stepped into the hair-role as a father, Hill said he has a deep appreciation for his wife and the other women in his life. It was his wife's idea to start posting videos of his daddy-daughter hair moments on social media, which have gone viral.

Like a lot of dads out there, Hill said he saw himself reflected in "Hair Love."

"[When I saw 'Hair Love'], it was like actually watching myself in the video," he said.

His advice to other dads: "Be the dad you want to be, be a good dad. Stereotypes will be stereotypes in whatever culture -- that's how I look at it." 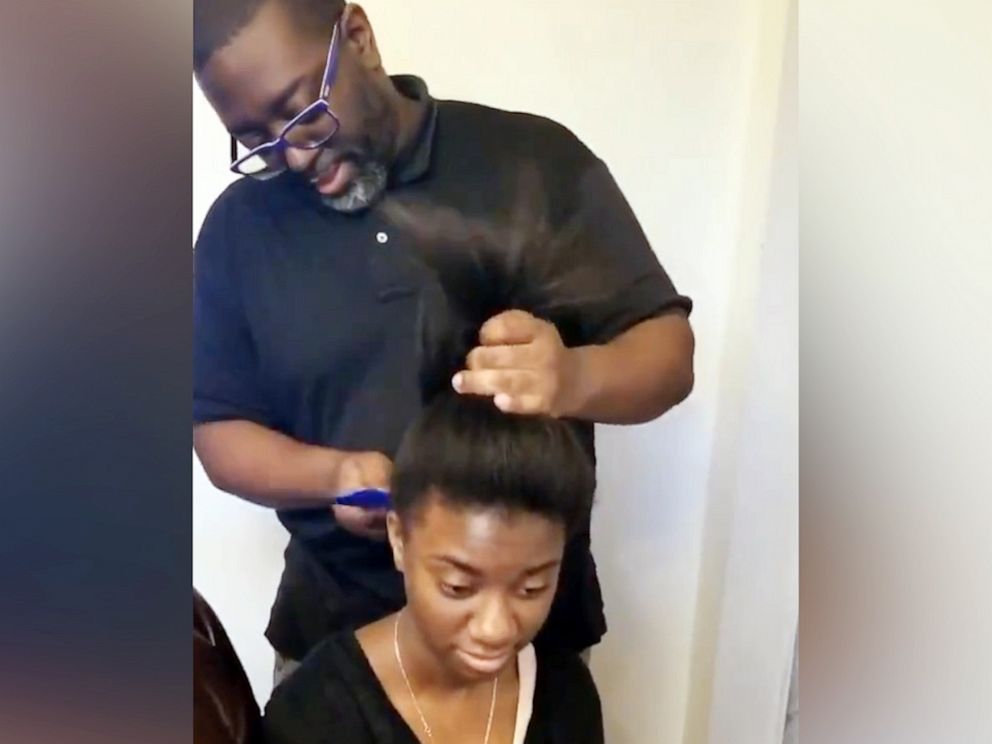 Courtesy Lufrey Jonas
Lufrey Jonas does his 14-year-old daughter Arielle's hair in Baltimore. Jonas calls these moments special because they are an opportunity for his daughter to talk him about anything.

Lufrey Jonas, a father of three from Baltimore, said doing his 14-year-old daughter Arielle's hair has made him a better dad.

"When I'm doing hair, we spend that time together. To me, it's a bonding time," said Jonas. "We talk about different things, things we may not normally talk about on a busy day."

Jonas, a member of the Black Father Facebook group, said he's tried to teach his daughter to be proud of who she is and her natural hair.

"Also, it's just a feeling to be able to prep her hair, wash it, blow dry it -- it gives me a good feeling," Jonas continued. "I want her to be proud of who she is, the hair that grows out of her scalp, and [I want to] help her grow to be a positive and wonderful woman who appreciates her natural self."

Editor's note: This was originally published on March 5, 2020.