For Olatz Mendiola Marinas, becoming a mother was her "utmost objective in life."

"I had so much love to give and wanted to give it to my child," the single mother from San Sebastian, Spain, told "Good Morning America."

She achieved her dream with the help of a woman from Rockwall, Texas, who became her surrogate.

Celeste Remediz, a former Dallas police officer, told "GMA" her third and last child was "a bit of a surprise."

"I didn't know I was pregnant with her until I was five months along. At the time, I was working as a Dallas Police Officer on patrol and no clue I was pregnant.

"After the birth of our daughter, I told my husband that if she was to be our last child, I felt I had missed out on half of the pregnancy and didn't get to fully enjoy it and take it all in. I love being pregnant and enjoyed all my pregnancies." 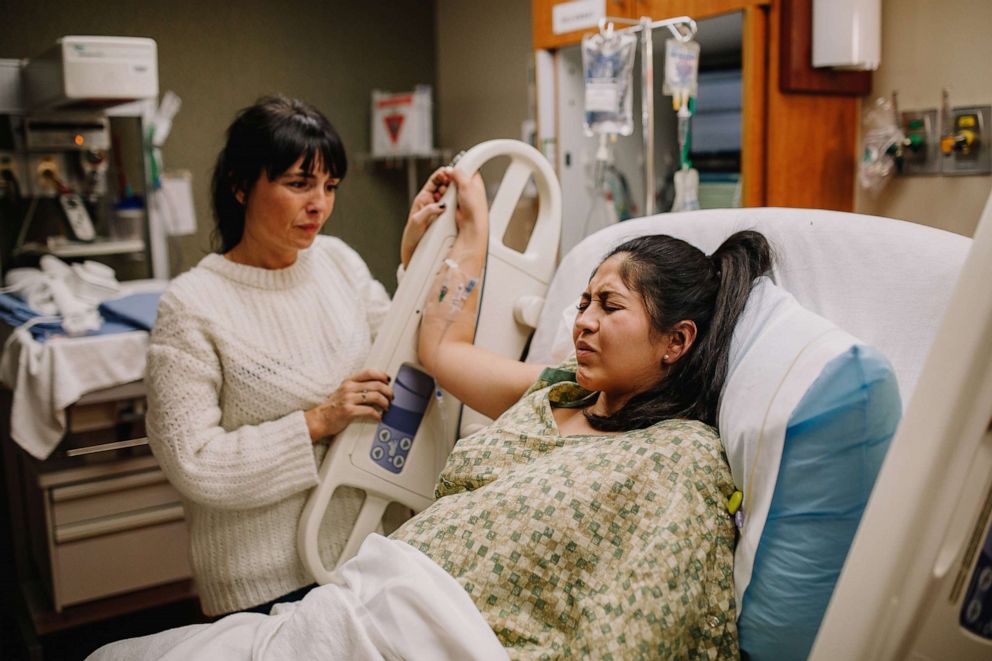 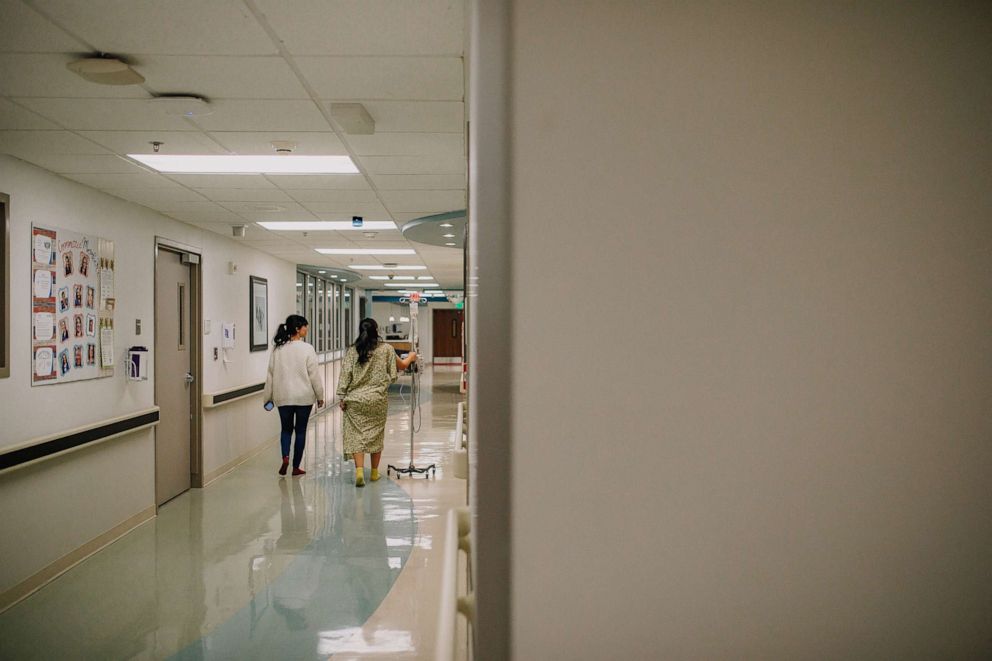 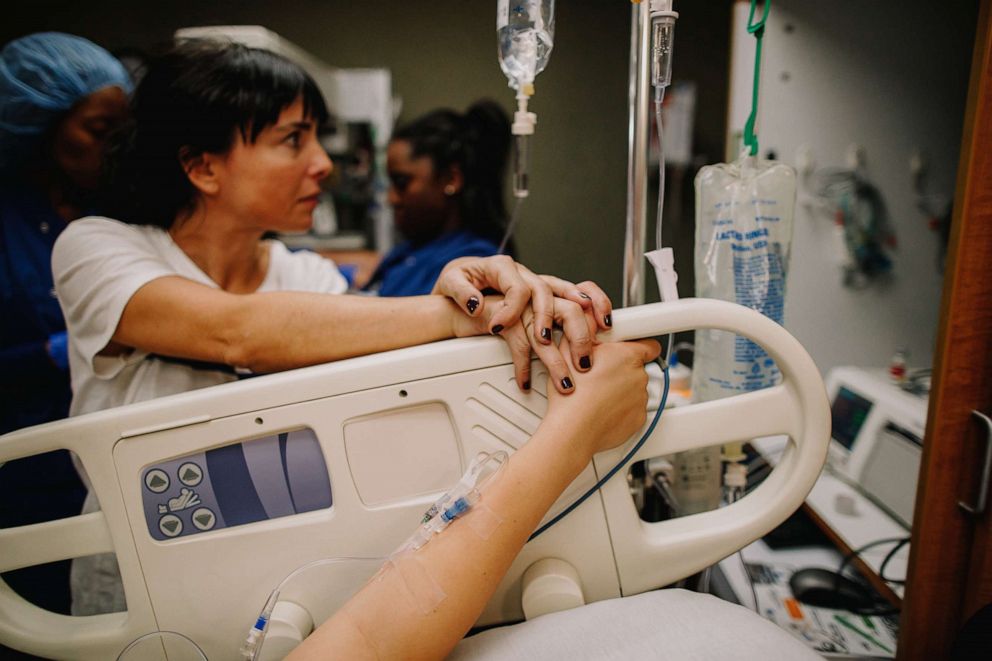 She said the subject of becoming a surrogate came up when the family had newborn photos taken.

MORE: Do little kids need 'toddler milk?': Here is what to know

"It had never crossed my mind, I really didn't know a whole lot about it," she said. "I realized then, that if my husband and I were done growing our family, I could be pregnant again and help someone else grow theirs through surrogacy. My husband agreed to support me and we found the agency who did an amazing job matching us to Olatz." 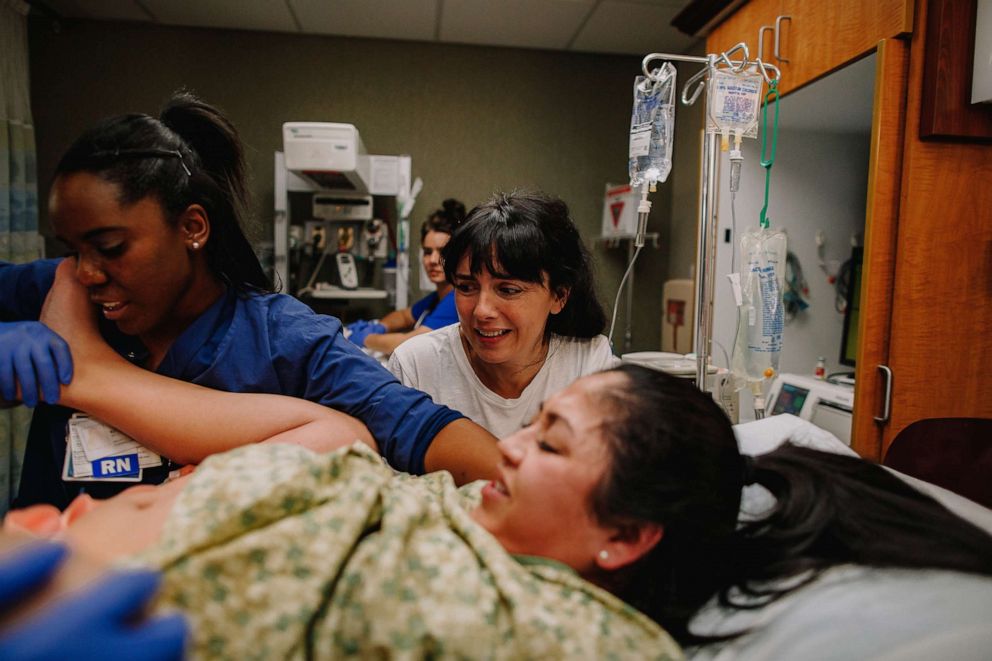 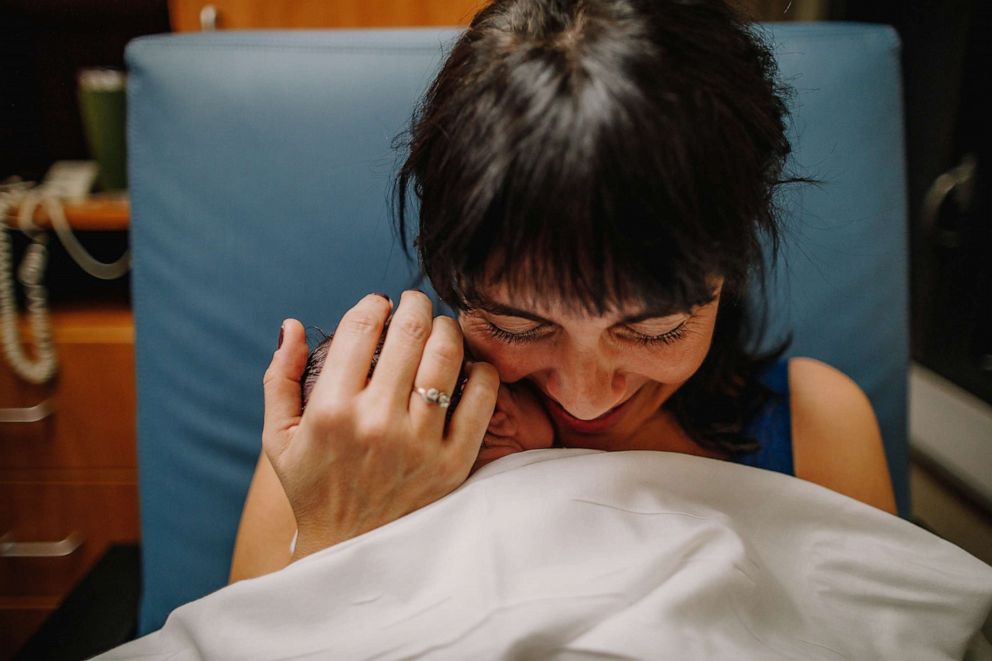 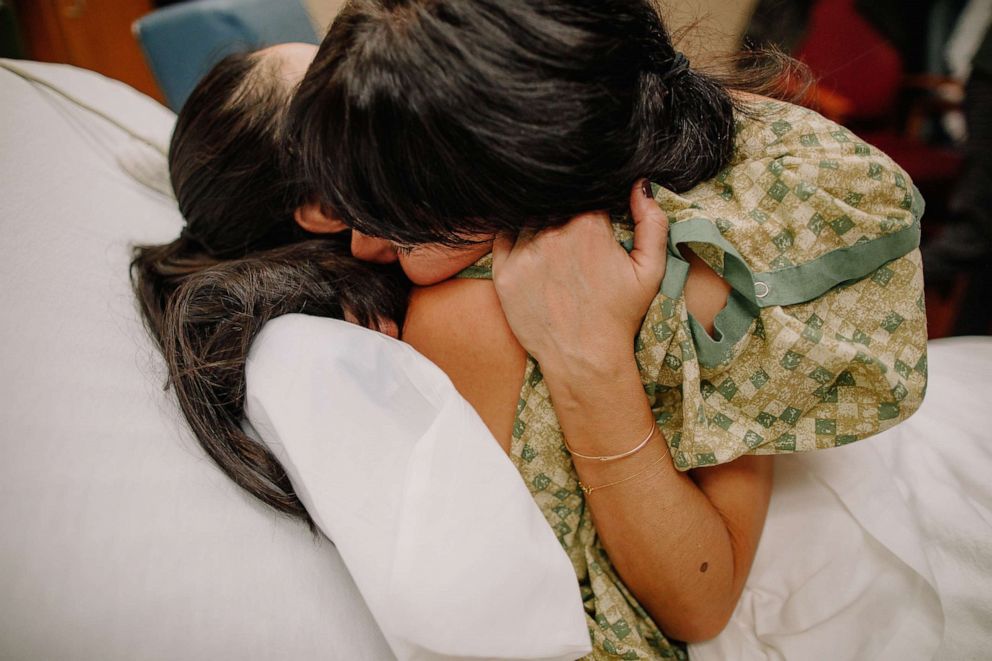 For Marinas, it was "a very long and hard path."

Her first step was securing a loan to pay for the surrogacy, she told "GMA."

MORE: Mom guilt: From one full-time working mom to another

"Most of my friends and family were happy with my decision, but not all agreed and [were] optimistic," she said. "Many people tend to judge and even the ones that wanted what's best for me had difficulties to see how important it was for me. If I had to do it again, I would definitely go for it a million times. It was probably the best decision of my life."

Getting to know each other

"Since I knew Celeste was going to be the surrogate mother, we started to talk regularly on the phone and got along well very quickly," Marinas said. "I had the chance to live with Celeste three weeks before giving birth and to be fully involved in her family daily life, which really allowed me to get to know her well, support her and share her feelings on a daily basis." 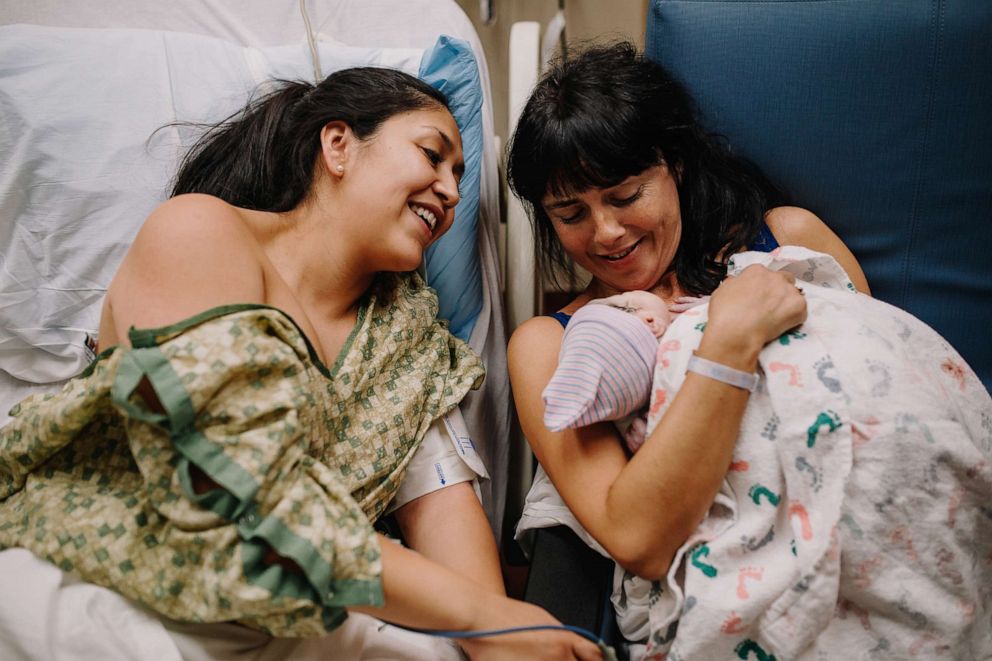 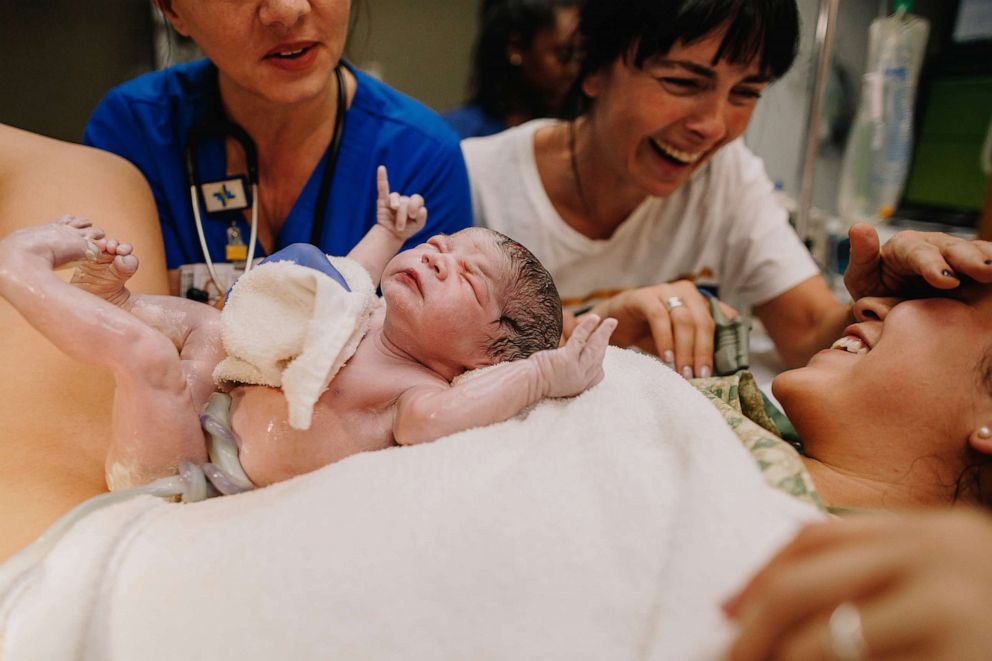 For Remediz, the connection came when the two women met.

"When we picked her up from the airport and she embraced me as if I was one of her own and I just knew I had made a friend for life," Remediz said. "From the beginning, Olatz has felt like family, she checked on me weekly and sometimes daily. She loves my kids like they were her family. She chose to arrive from Spain weeks early so that we could get to know each other and so she could bond with all of us. She and the baby are part of our family now. I feel like I can talk to her about anything. "

The emotional birth was captured by Stephanie Cabrera from Reborn From Within. Kala Marinas was born on Jan. 21, 2019.

"It was an extremely intense moment so difficult to describe, I cried and felt like I was giving birth myself, I had been waiting for this for so many years and it was finally becoming true, this baby that was just born was mine," said Marinas. "I was ecstatic. My mother was there too. It's been a very special moment that I'll never forget."

As the intended mother, Marinas spent every moment of labor with Remediz.

"Celeste is an amazing person that really took me with her and allowed me to live all those incredible moments with her," Marinas said. "Her generosity, her authenticity, her real will to make good really touched me. I feel extremely lucky to have been able to share all this moments with her and I am extremely thankful for it. "

For Remediz, the experience was "a relief."

"When they placed baby into the arms of my intended mother I just felt so elated and on cloud nine. I was so happy for her. I never felt sad about giving her back to mom. I felt like the baby's aunt or something but never like her mother. This journey has been one of the most fulfilling things I have ever done and has taught me so much."

For photographer Cabrera, the experience was eye-opening and will inspire her future work.

"My family and I will be traveling full time the next few years in our old restored Volkswagen bus, during this time I will be documenting various individuals during their prenatal, birth and postpartum process, she said.

"One of my biggest goals is to highlight all of the inspiring birth workers and organizations that greatly improve birth outcomes for everyone especially for people of color and low-income communities that are so often marginalized and at higher risk for maternal and infant mortality."