A Georgia mom is on a mission to spread joy and raise awareness after her 1-year-old son was diagnosed with uncombable hair syndrome, a hair disorder she’d never heard of until last year.

The boy’s mother, Katelyn Samples, told “Good Morning America” that a stranger messaged her last summer on Instagram after seeing a photo of her youngest son, Locklan Samples, and asked if he had been diagnosed with uncombable hair syndrome.

“At first, you see ‘syndrome’ and you're like, ‘Oh my gosh,’ like is something wrong with my baby? Is he in pain or something?” Samples recalled.

She added, “I just went in a tailspin and did a Google deep dive, called his pediatrician and the pediatrician even was like, ‘Hang on, let us look into this.’ They hadn't even heard of it. So they sent us to a specialist, a pediatric dermatologist at Emory in Atlanta and that's where we were able to get the diagnosis.” 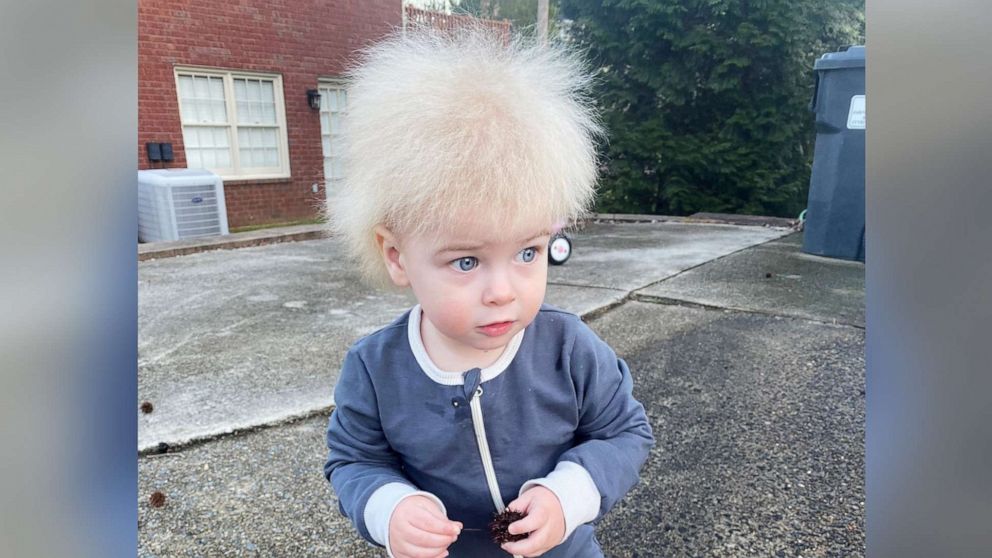 Courtesy of Katelyn Sample
1 year old Locklan Samples, who has a rare disorder called uncombable hair syndrome, is pictured in a family photo near Atlanta, Feb. 23, 2022.

What is uncombable hair syndrome?

Uncombable hair syndrome is a rare hair disorder and a genetic condition that usually affects children between the ages of three months to three years, although there have been reports of cases in kids up to age 12. According to the NIH, only about 100 cases have been reported in medical studies but experts say there could be more unreported cases.

“People might just be like, ‘Oh, my child has unruly hair or hair that's difficult to tame, but they might not have sought a medical professional, like a pediatrician or dermatologist to formally diagnose the condition,” Dr. Carol Cheng, a pediatric dermatologist at UCLA Health told “GMA.”

According to Dr. Cheng, children with uncombable hair syndrome, also called spun glass hair, can have hair that grows in all directions and their hair can be straw-colored, have a dull texture, or be hard to manage. 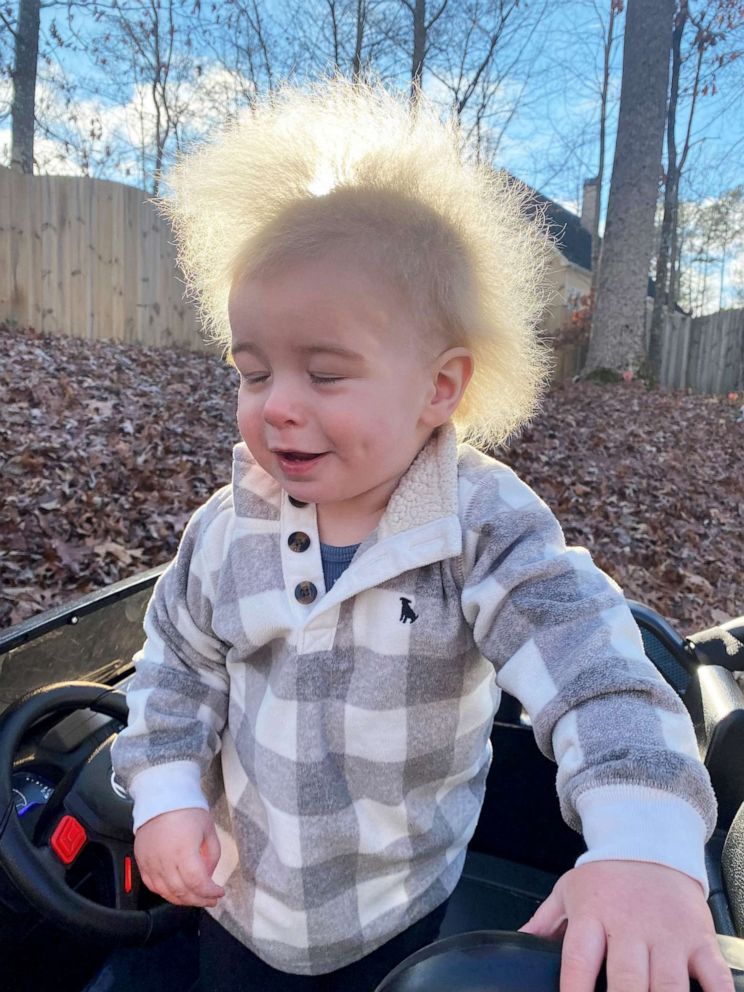 Courtesy of Katelyn Samples
Locklan Samples, who has a rare disorder called uncombable hair syndrome, is pictured in a family photo near Atlanta., Dec. 19, 2021. Katelyn Samples said Lochlan, her youngest son, has both a sweet and spicy personality.

A specialist can diagnose uncombable hair syndrome through a genetic test and an examination of a hair clipping through electron microscopy, a process that uses a special type of microscope.

“When you look under that microscope, you can see that instead of having hairs that are cylinder shape … the shaft of the hair is actually more in a triangular shape,” Dr. Cheng explained. “Within the triangle, there (are) these little grooves that go up and down the long axis of the hair shaft so that's why it makes it really uncombable.”

“To diagnose the condition, at least 50% of the hairs would have this abnormality, but not all the hairs have to be abnormal,” Dr. Cheng added.

For the genetic test, doctors would look for three specific genes that have been associated with the syndrome, she said. 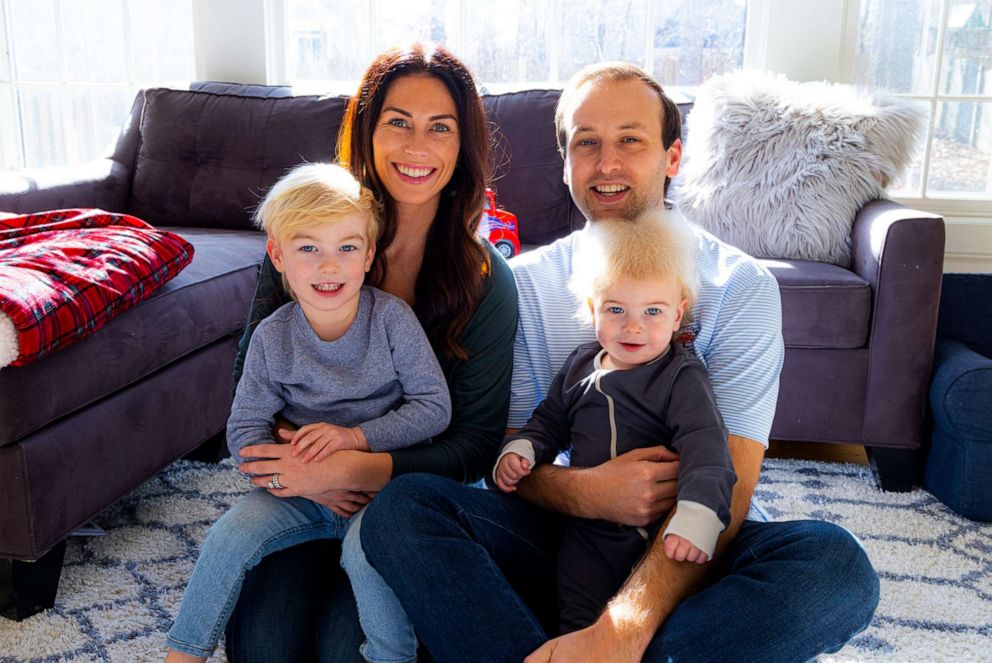 Courtesy of Katelyn Samples
The Samples family is pictured in their home outside of Atlanta, in Roswell, Ga. Youngest son, Locklan Samples, 1, has a rare disorder called uncombable hair syndrome.

“The three genes that were found are what we call an autosomal recessive condition, meaning that both the mom and the dad have to have one of these genes and pass it on to the child who's affected,” Dr. Cheng said. “It can also be inherited in what we call an autosomal dominant condition where only one of the parents has to have this genetic trait to pass on to their child.”

Despite the syndrome's name, Samples said she can still comb Locklan’s hair for now but she doesn’t need to do so often, and overall, it’s relatively low maintenance.

“It can get matted easily. It is very fragile. … It can get tangled and I do have to be careful," she said. "That would be an example of a time I actually would wash it because I very rarely wash his hair. Just doesn't need to be, it doesn't really get greasy.”

The mother of two said other people have been very curious about Locklan’s hair both in public and online. “We get a lot of comments about him looking like a dandelion and that's actually a very accurate description of appearance and how it feels," Samples said. "His hair is extremely soft, like a little baby chick. People will ask to touch it, which is fine with us, as long as people ask."

Samples has been sharing Locklan’s story and photos on Instagram since his diagnosis, In a post from October, she wrote that she wanted to do so in part “to spread some joy on the internet!”

“Our biggest message is to celebrate what makes you stand out and what makes you different and hopefully bring awareness to this uncombable hair syndrome and hopefully, we can get more information,” Samples said. “If you think your kid might have it, go inquire and ask questions and be your child's advocate.”

There are no formal treatments for uncombable hair syndrome and the hair abnormalities tend to resolve themselves as time goes on.