Some moms are opening up this July during Disability Pride Month and shining a light on a topic they feel gets overlooked and is often viewed negatively by others in society.

Natalie Hadley of Omaha, Nebraska, posted on LinkedIn in honor of her son Ranier, who lives with multiple disabilities in a group facility.

"July is Disability Pride Month. I am proud to love someone with multiple disabilities, my son, Ranier aka 'Rain.' Rain has a traumatic brain injury that resulted from being shaken by a daycare provider as an infant. He has come so far from a (mistaken) prognosis of being vegetative to being a loving, funny young man. He makes everyone he meets smile bigger. I love you, Rain! #ProudMama #DisabilityMatters #DisabilityPrideMonth," the 55-year-old mother of three wrote alongside a photo of herself with her 26-year-old son. 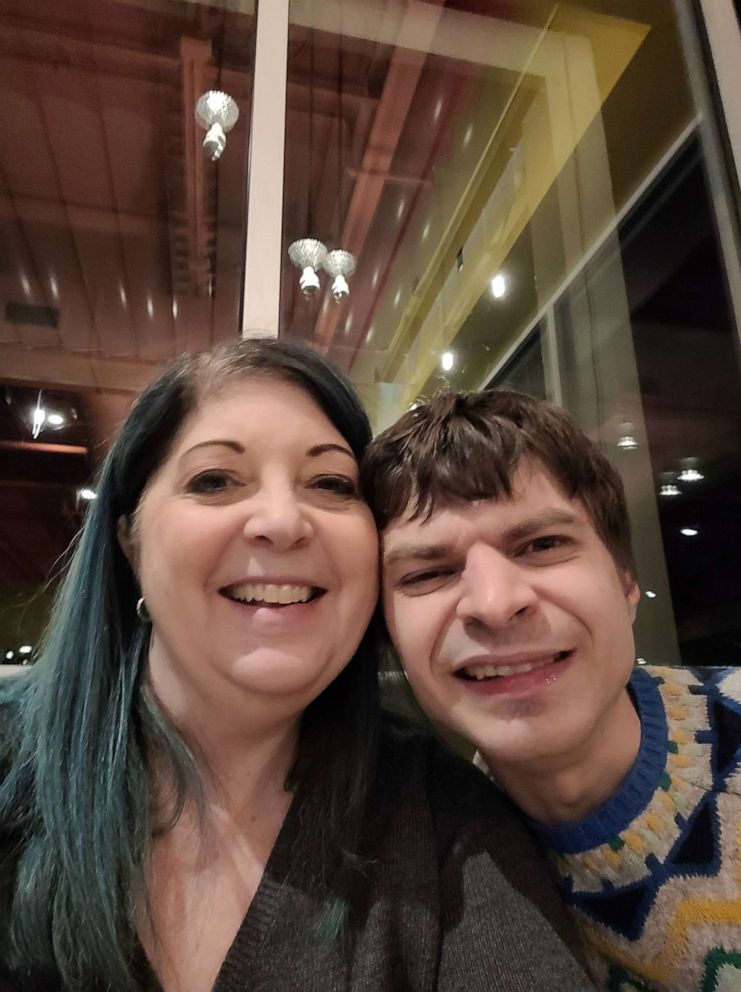 Courtesy of Natalie Hadley
Natalie Hadley and her son Ranier, now 26, who lives with multiple disabilities. Ranier was a victim of child abuse at the hands of a daycare provider when he was a baby.
Editor's Picks

Hadley told "Good Morning America" she wanted to share her story after seeing others post about Disability Pride Month because, unlike some with disabilities who can speak up for themselves, her son is unable to but deserves as much recognition. 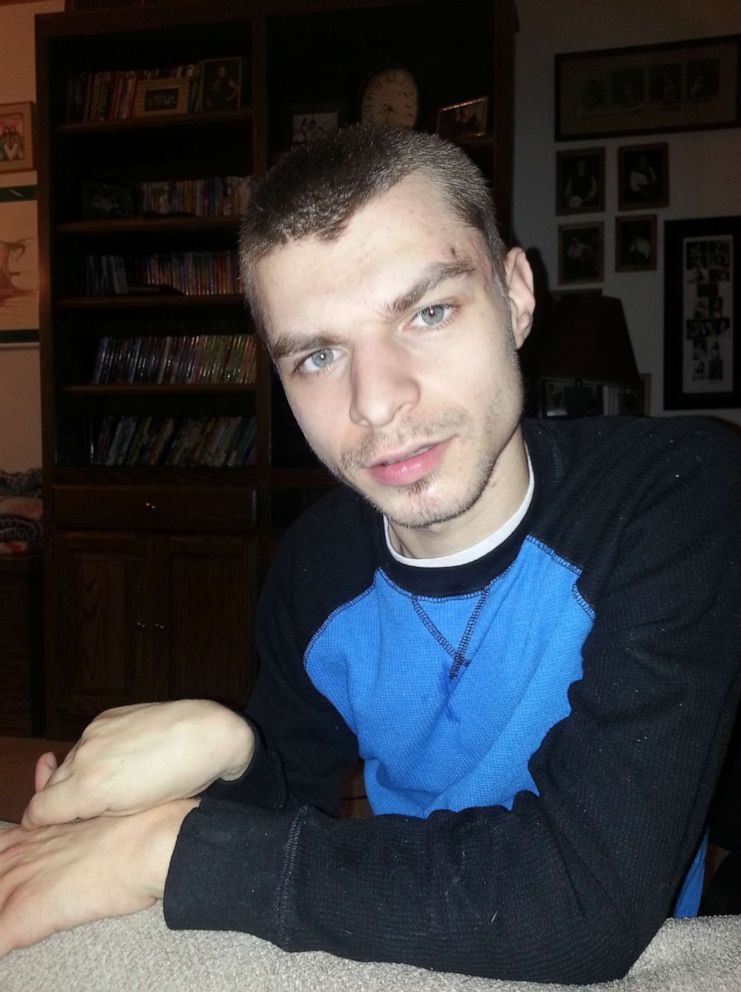 Nearly 41 million Americans live with a disability, according to data from the U.S. Census Bureau and on Tuesday, the U.S. will mark the 32nd anniversary of the Americans with Disabilities Act, which was signed into law on July 26, 1990. It protects the rights of and prohibits discrimination against people with disabilities.

Ranier Hadley, according to his mom, sustained a traumatic brain injury as a 3-month-old at the hands of a daycare provider. He developed shaken baby syndrome, a “severe form of physical child abuse,” as defined by the Centers for Disease Control and Prevention.

He also has partial paralysis, some of which affects his speech, as well as emotional control issues and cognitive and developmental delays, meaning he functions at about the level of a 3- or 4-year-old.

"Part of why I advocate, part of why I'm very public and open about being the mother of an adult son with disabilities is, I hope other people see that situation and take comfort from it, maybe get some strength from it," Hadley said.

Michelle Trites, a stay-at-home mom to 3-year-old Emma, said she also felt compelled to join in the social media conversation to raise awareness and respond to people who say they couldn't handle a situation like hers as someone living with a disability who is also a parent to a child with disabilities. 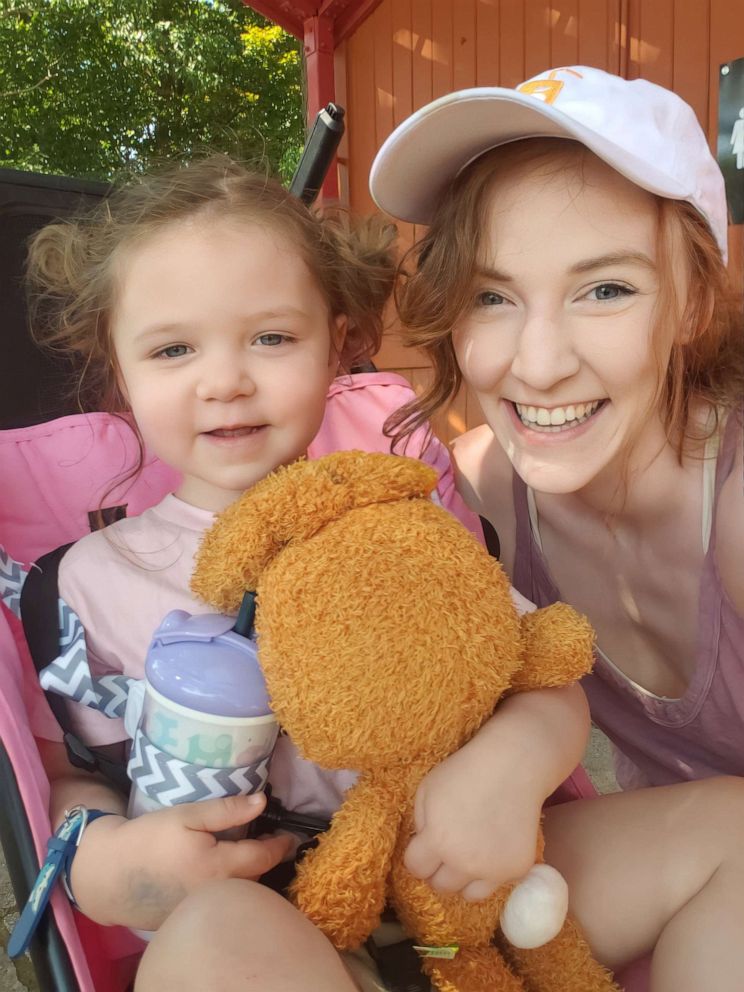 Courtesy of Michelle Trites
Michelle Trites describes her daughter as an energetic and "very funny" girl who loves to bounce on the trampoline.

"Some days' hard' doesn't even come close to how it feels. I wasn't given a choice. Instead, we were given diagnoses, medications, and therapies. Emma means the world to [my husband] Tyler and I and there is nothing we won't do to give her the best life for her," Trites, 28, wrote in part in an Instagram post.

Emma, according to her mom, was diagnosed with Type 1 diabetes at 12 months and then with autism last September.

"As a parent, and as a person with diabetes, it's not something you choose," she told "GMA." "When me and Tyler were expecting, we never imagined that our daughter would be getting two diagnoses within the first two years of her life." 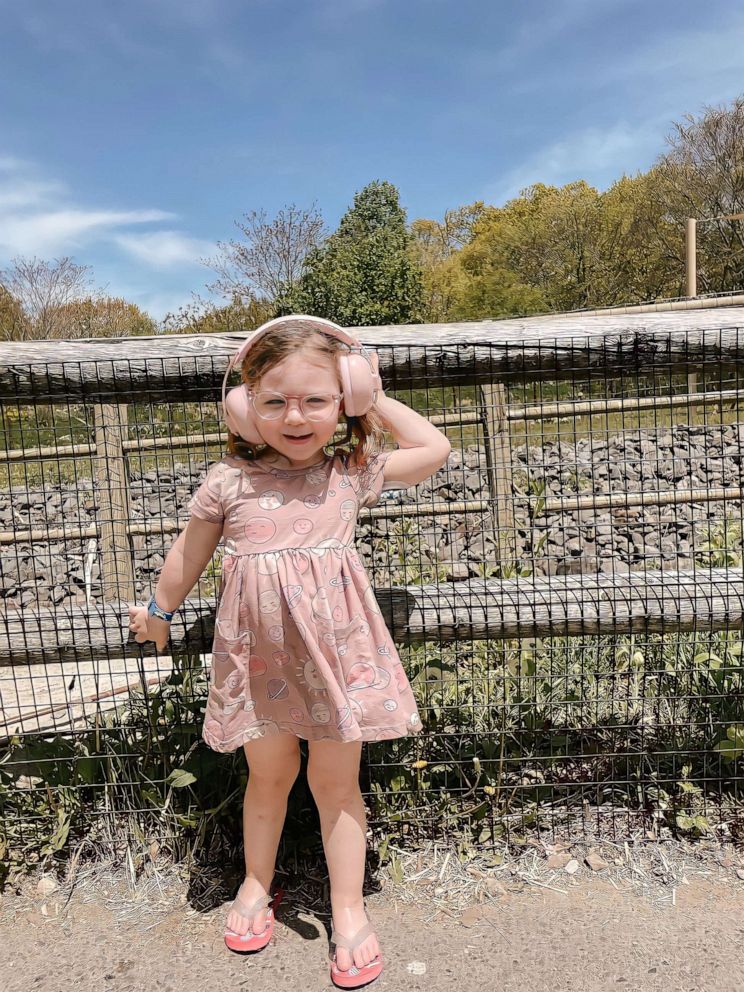 Courtesy of Michelle Trites
According to her mom, Emma, now 3, was diagnosed with Type 1 diabetes when she was 12 months old and with autism last September.

"I think one of the hardest things about disabilities and being someone with a disability or a parent to someone with a disability is the word 'disability' comes across to most people as negative or less than and it's not," Trites said. "It's a difference but it doesn't mean that you're less than someone else or that you can't do something. All disabilities are different and I think that people shouldn't be afraid of that word, and they shouldn't feel like that labels them as who they are."

This Disability Pride Month, Hadley wants others to think about how people with disabilities inhabit the world around us.

"I think we need to get more comfortable with people with disabilities. And I think we also need to be better about thinking ahead to how would a person with disabilities experience something, whether that's software, a community festival, making sure that our folks who make use of a wheelchair can access those things," Hadley said. 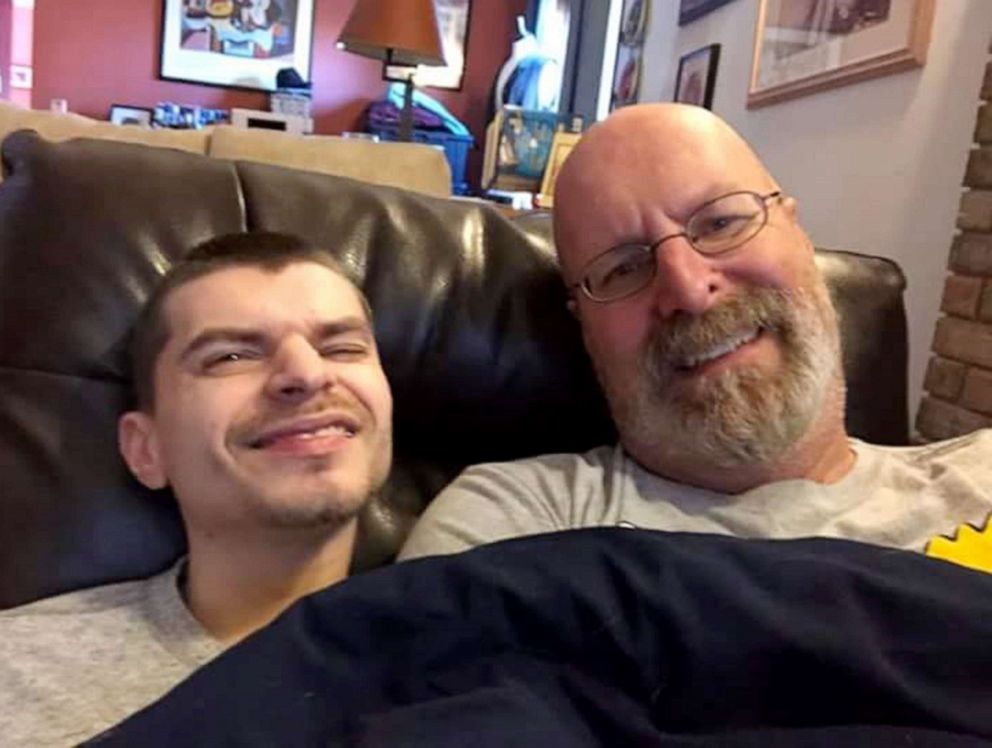 Courtesy of Natalie Hadley
Ranier with his dad, Richard Hadley, who made a documentary titled "Rain," focusing on his son's experience. 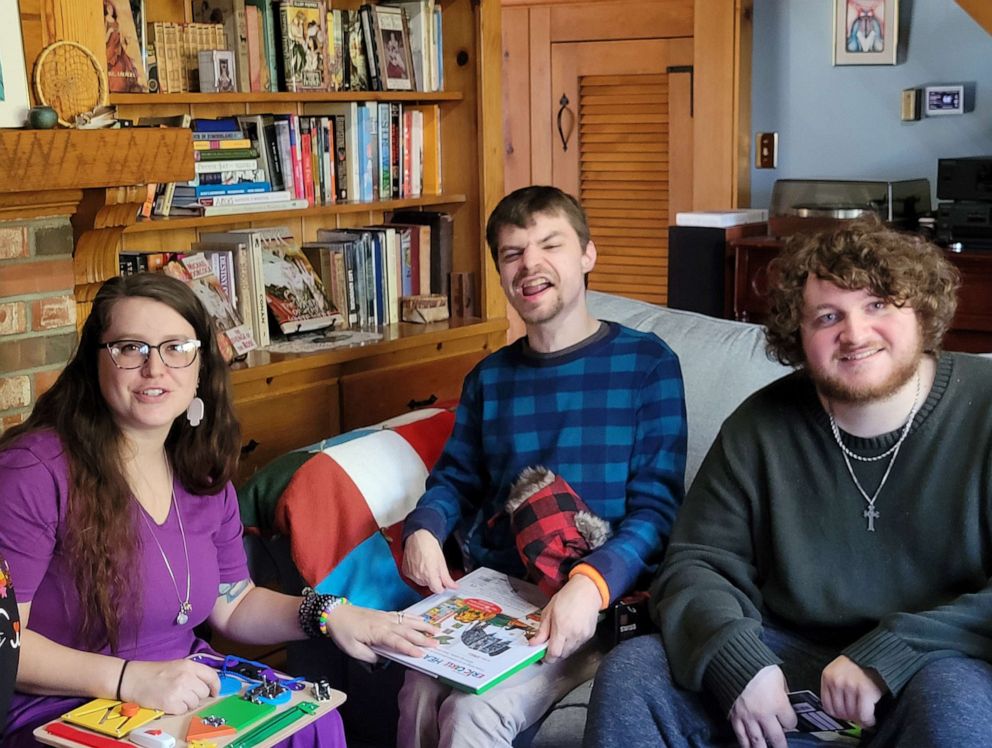 Courtesy of Natalie Hadley
Ranier Hadley (center) poses with his older sister Georgia and younger brother Noah in an undated family photo.
MORE: Movie theater aims to be more inclusive of those with sensory processing challenges

Trites said it's also a time not just to acknowledge but to embrace differences and it's a message she hopes her daughter will learn as she grows up. 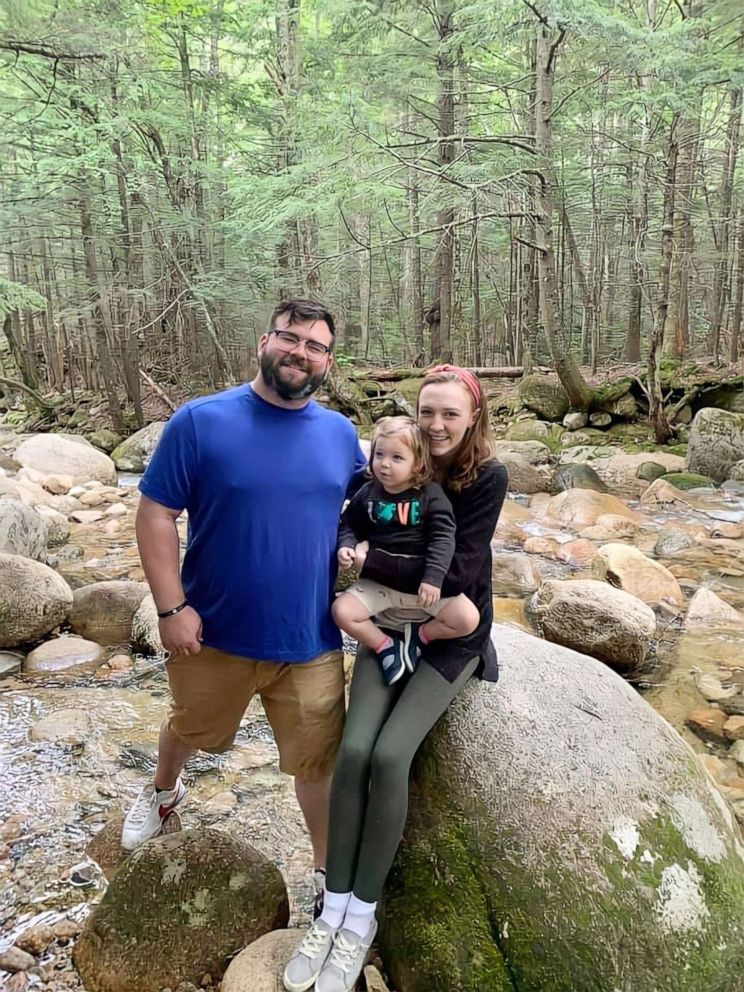 Courtesy of Michelle Trites
Michelle and Tyler Trites are the parents of a three-year-old daughter named Emma, who lives with Type 1 diabetes and autism.
MORE: Beauty influencer with disability aims to be the representation she never had

Trites, who shares Emma and her family's story through the Inspiring The Girls blog, hopes that talking about disabilities will continue to help others and build a community online that she's found to be supportive outside of her local New Hampshire community.