One woman was prepared for every aspect of her daughter's birth -- except for the location.

Emily Geller Hardman, 35, was 37 weeks pregnant when she attended a family wedding in Lancaster, Pennsylvania, with her husband, Travis Hardman. Still far enough out from her projected due date, she figured it was fine to attend and felt nothing out of the ordinary during the wedding. Just hours later, when they were back in their hotel room, however, the opera singer said her water broke. But she didn't rush to the hospital.

"The amniotic fluid was clear and there were no contractions," Hardman told "Good Morning America." "And this was a first-time labor for me. Statistically, most first-time labors are about 16 to 24 hours, so in my head we had plenty of time."

When Hardman woke up to her first contraction around 3 a.m., she knew it was time to go even if it meant giving birth in the car.

"In my head I was thinking that I've been preparing for this for three years," she said. "I can certainly do early labor in the car." 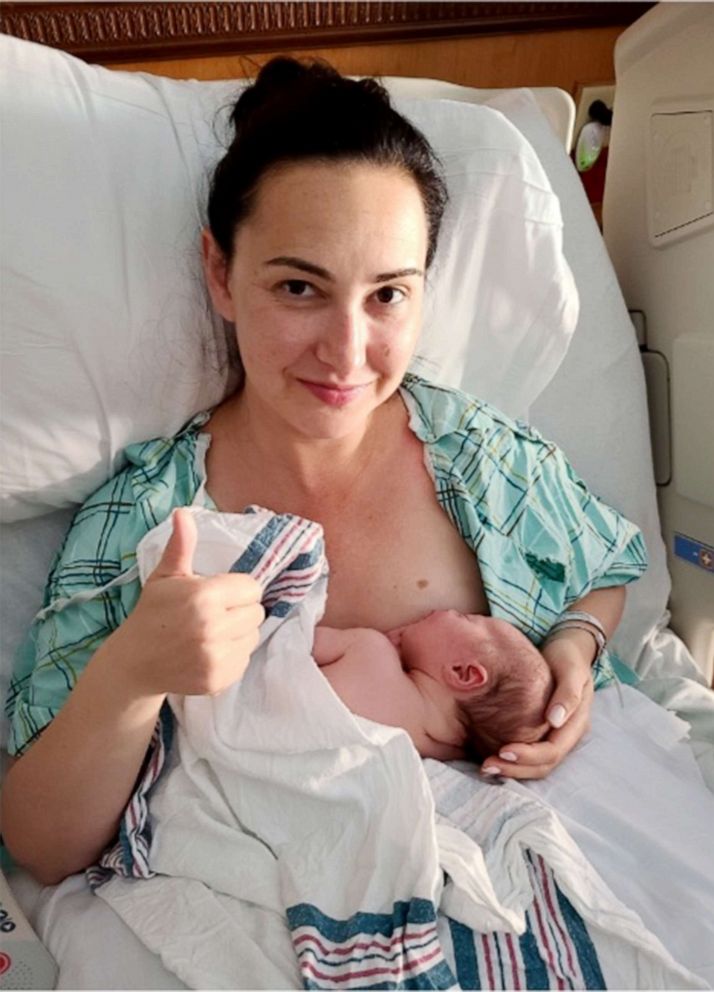 Hardman's firstborn, Wesley, 2, was born via cesarean delivery. She initially wanted to do a vaginal birth, but circumstances forced her into a C-section.

After what she described as a traumatic experience, she was determined to have an unmedicated vaginal birth at a hospital an hour away from their home in Briarcliff Manor, New York, with midwives and a doula on hand.

"I was very involved in the physiological birth world," Hardman said, adding that she read books, listened to podcasts and did prenatal exercises to prepare herself mentally and physically for a second birth on her terms.

Armed with just her knowledge, signals from her body and the GentleBirth meditation app, Hardman guided herself through labor while her husband drove.

"My husband's driving and the entire time I'm focusing on listening to the app to get me through each contraction," she recalled. "I was just riding the waves and hoping we were going to make it back. We still didn't realize how fast this was going."

MORE: Male doula aims to be an advocate for women during childbirthe

Around 5:30 a.m., they were able to pull over so Hardman could stand and stretch.

"At that point, once I stood up, I think gravity hit and I started bearing down," Hardman said. "My water starts leaking again. But I knew that we had to get back in the car and get to the hospital so I willed myself back into the backseat."

Hardman tried her best not to push so that she could hold on until they arrived at the hospital, but when her contractions started coming faster and even more intense, she knew she wouldn't be able to help it.

"This baby was coming out of me one way or another," she said. "I either needed to, for lack of a better word, get on board with what was happening and just allow my body to do what it was doing or I could fight it tooth and nail, which didn't seem like it was going to be helpful."

"I could feel myself bearing down and pushing," Hardman continued. "I instinctively just reached down because I'm feeling so much pressure and I feel the top of a baby's head starting to crown." 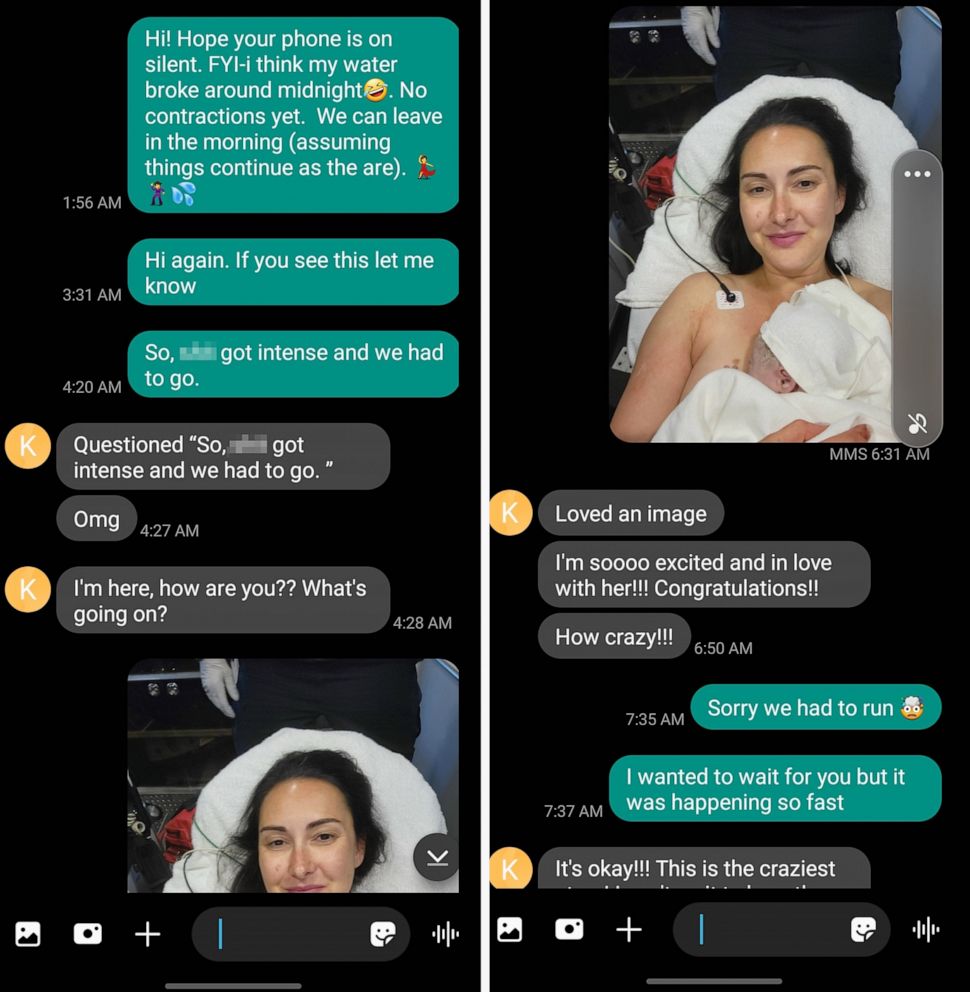 Courtesy Emily Geller Hardman
A screenshot shows a text conversation between Hardman and her sister-in-law Kate on May 15, 2021.

She told her husband to pull over, but there was nowhere for them to do so safely.

"He's trying to pull over anywhere he can and as he's doing that, we're still driving and her entire body just flies out in one contraction," Hardman said. "There was no pushing stage of her head slowly coming and then waiting for the next contraction and resting. It was just a one-shot deal -- she just flew out."

What Hardman described is a phenomenon known as fetal ejection reflex, in which the body "expels" a baby involuntarily without any forced pushing on the person's part. 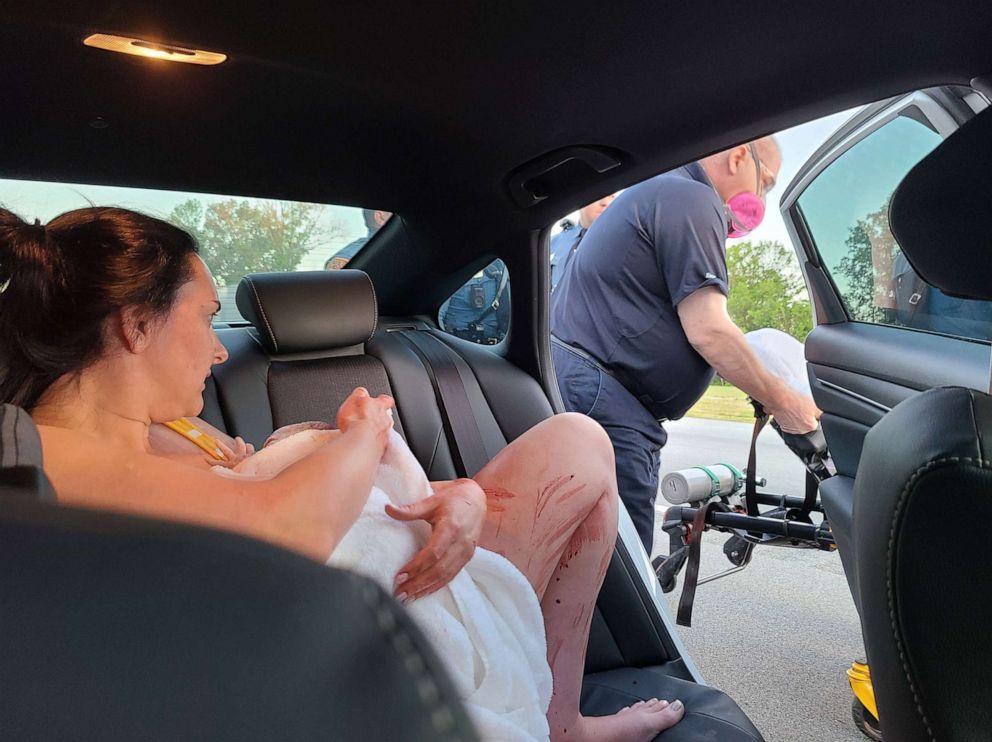 Despite the circumstances surrounding her daughter's birth, Hardman said the experience wasn't stressful. As an opera singer, she's used to high-stress situations and believes that experience, in addition to all the work she put in, helped her handle everything as smoothly as possible.

"You have to perform at a high level under stress, so you're used to those types of situations and having to focus on what you're doing and not how you're doing," Hardman said.

"I remember I felt relieved," she said of her feelings after giving birth to her daughter, Rosemary Claire. "I thought something like, 'I did it.' It was empowering and a very healing experience. I do feel very lucky."