A Texas family has nearly doubled in size after welcoming quadruplets this summer.

Gaby Hagler, 39, and Patrick Hagler, 50, found out at their 12-week ultrasound that they were expecting not one but four babies.

"We thought we were looking at two views of the same baby and then possibly four but the ultrasound tech was all excited and she's counting 'one, two, three, oh wait, no, no, wait, there's four,'" Gaby Hagler, a real estate broker, recalled to "Good Morning America."

"We're like, 'Four? Four what? Four limbs? Like what are we counting?' And she's like, 'Well, look, look up there. What do you see?' And there were four different babies doing completely different things. So it was very clear at that point that it was not multiple views of the same baby." 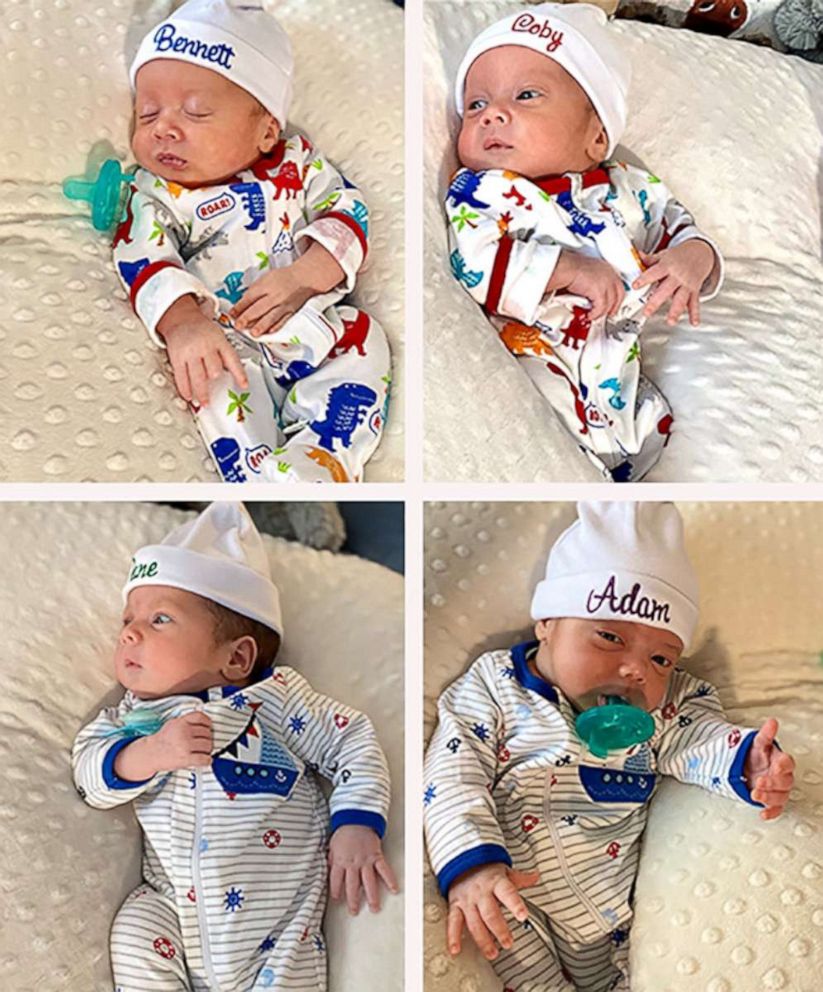 Courtesy of Gabriela and Patrick Hagler
Bennett, Coby, Dane and Adam Hagler are quadruplets who were born on June 22.
Editor's Picks

The couple said they were in "complete shock" at the news but after previously experiencing a miscarriage, they were excited to meet their rainbow babies.

Adam, Bennett, Coby, and Dane were born on June 22 at 34 weeks. The baby boys are fraternal quadruplets and their older siblings -- stepbrother Paxton, 12, stepsister Kalleigh, 13, and brother Sammy, 2 -- helped choose their names. 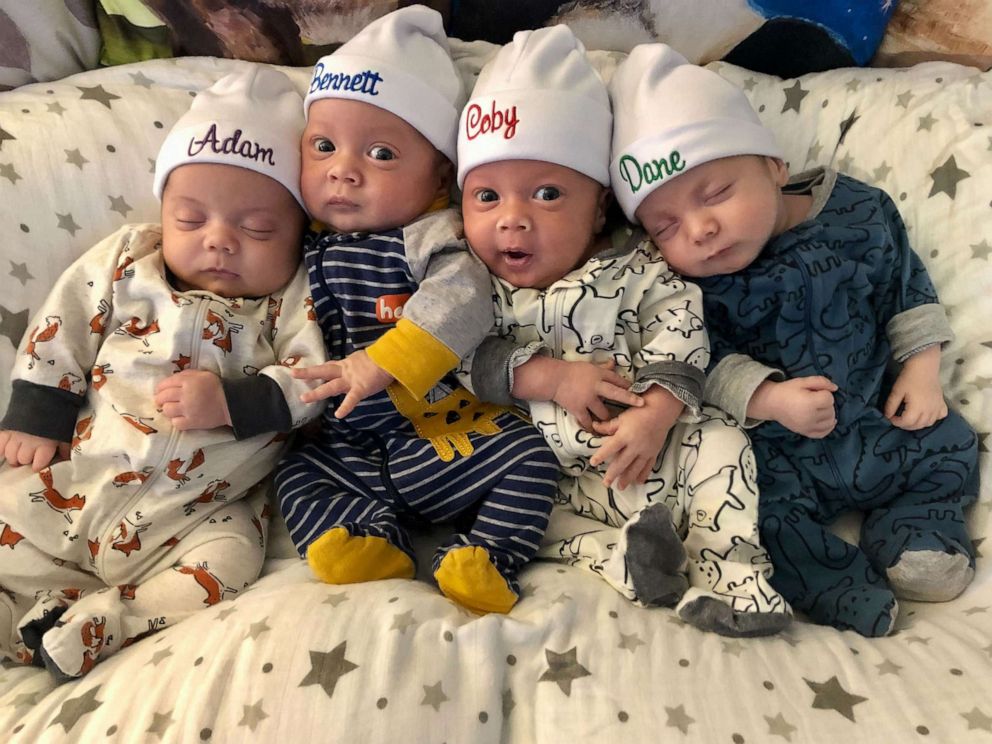 Courtesy of Gabriela and Patrick Hagler
The Hagler quadruplets were born in June and are nearly two months old.

"[The quadruplets] were in two separate NICUs for a couple of days and then the brothers all joined up in the intermediate-level NICU and then started being released to go home fairly quickly. So no complications with the babies, fortunately," Gaby Hagler said.

Even though the Haglers had only planned to have one more baby, they agree that the quadruplets have transformed their lives for the better.

"I just turned 50 so turning 50 with four little babies -- most people are becoming grandparents at 50 -- and so I don't know, I think it's energized me," Patrick Hagler, a marriage and family therapist, said.

"It's been certainly life-changing and a little bit scary, because we had financially planned for one more and that even took some planning and thinking about how we were going to do things," he continued, adding that they were fortunate enough to be able to dip into their retirement savings. "It completely blew up the whole financial plan but it's manageable. It's just a little bit daunting at first." 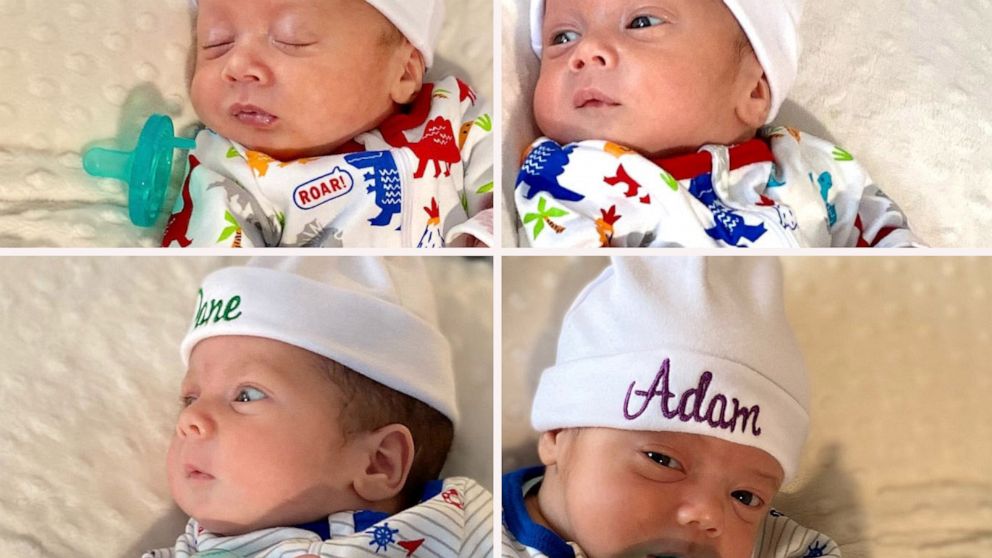 Courtesy of Gabriela and Patrick Hagler
Bennett, Coby, Dane and Adam Hagler are quadruplets who were born on June 22.
MORE: Parents reunite with newborn quadruplets after Texas ice storm keeps them apart

In addition to the financial changes, the Haglers have been figuring out their routine with the quadruplets as they continue to grow. Gaby Hagler estimated that they go through an average of 45 diapers, 95 wipes and anywhere between 12 to 24 bottles per day, with about nine hours dedicated each day to feeding, burping, changing and tending to the quadruplets' needs. 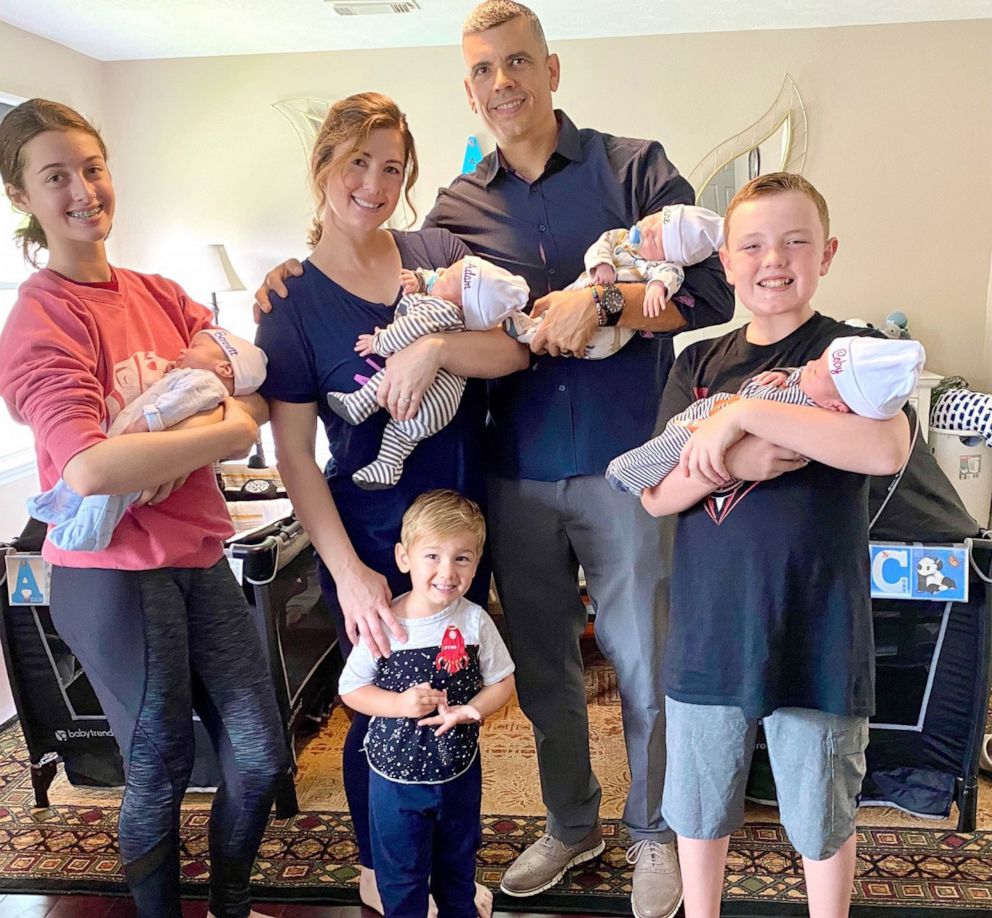 The Haglers say they've also assigned each newborn their own color and animal, which helps family members tell them apart. Adam has a blue and giraffe theme, Bennett was given a green and sloth theme, Coby is often dressed in a white and panda theme, and Dane has a gray and elephant theme.

"We realized that with the naming of the cribs and the way we have the cribs set up that that works for us pretty well. But the idea was to color code them and everyone gets their own color," Patrick Hagler said.

Gaby Hagler said the babies' personalities have started to emerge too, noting that Adam appears to be "the most mature," Bennett is now "the star of the show" and Coby is "the professional baby," who is always "on schedule." 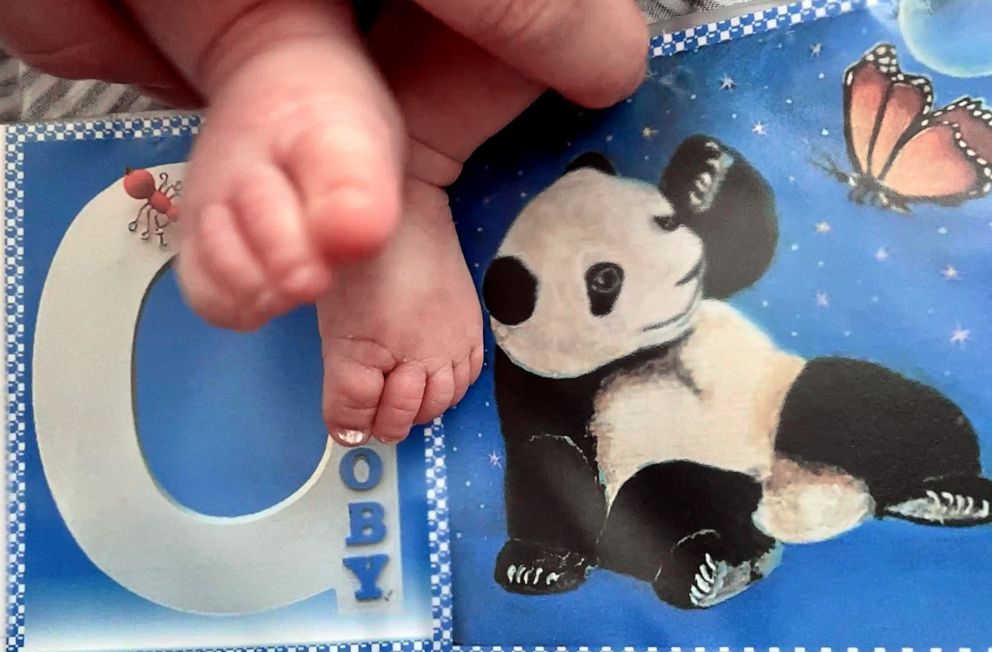 Courtesy of Gabriela and Patrick Hagler
Gaby and Patrick Hagler have tried several methods to ensure their quadruplets don't get mixed up, including painting each baby's toenail a different color.
MORE: Aunt shares genius way to tell her identical triplet nephews apart

The parents say they're grateful for the love and support from family and friends near and far, who've all rallied together to help them. They've also said the quadruplets' older siblings have stepped up to give them an extra hand as they've all settled in at home in Katy, Texas. 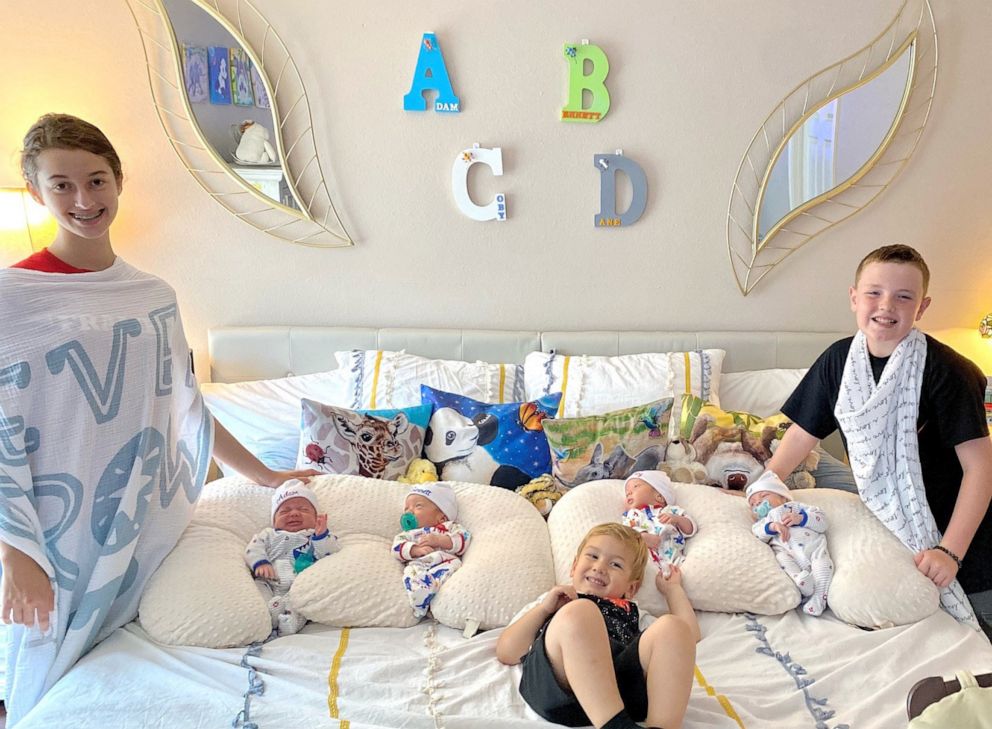 Courtesy of Gabriela and Patrick Hagler
The Hagler siblings consist of Kalleigh, 13, Paxton, 12, Sammy, 2, and the quadruplets Adam, Bennett, Coby, Dane, who are all nearly 2 months old.

"I think that the babies have been a real anchor for our family because we're a blended family. Paxton is my son from another relationship. Kalleigh is Gaby's daughter from another relationship. Sammy is ours together and so the babies have really brought everyone together and in just a really cohesive way. And having the older kids being able to participate in the way that they have has really strengthened the dynamic of the family," Patrick Hagler said.