Hawaiian cuisine is about much more than the delicious local dishes. The rich culture, respect for native ingredients and influence from other Asian cultures through the decades have created a spirit of generosity that's intrinsic to the islands' unique flavors and food.

Sheldon Simeon is a "through and through Hawaii-born chef" who has spent nearly 99% of his life living in the Aloha State, so his deep-rooted connection through cooking with family to professional kitchens, including his own acclaimed restaurants, makes him the perfect expert to answer the question: How do you define your culture's cuisine?

The 39-year-old Hilo-native and father of four who was born into a family of amazing cooks told "Good Morning America," "Early on, I was taught that we respect food to the utmost, the highest of high regards and that's always been part of my life."

"Hawaii cuisine is based upon its historical migration of people throughout the islands. The easiest way to describe Hawaii cuisine is to break it into two parts: Hawaiian cuisine is that of the first settlers and people who discovered this beautiful paradise and brought their plants and animals with them on long voyaging canoes. That's where you see ancient techniques like cooking underground in an imu and preservation of salt, the use of seaweeds and nuts to flavor their foods," he explained.

"The second part is Hawaii cuisine -- the next immigrants who came in to work on sugar cane and pineapple plantations," he continued. "Over a span of years we had the Japanese, Chinese, Korean, Portuguese, Filipino, Puerto Rican immigrants coming. They brought their culture, traditions and food that we're so lucky to have." 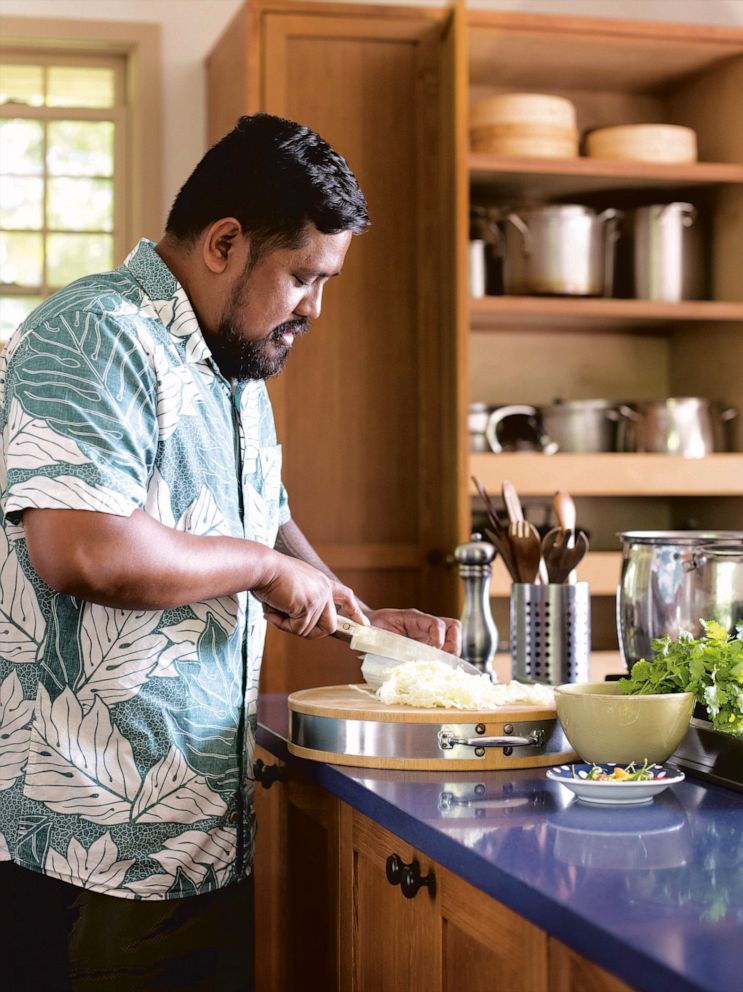 When asked to share one food that perfectly encapsulates the flavors of Hawaii, the first dish the chef and restaurateur said popped into his mind was poke: "It's the ultimate Hawaii cuisine. It's different when you have the fish from here, the seaweed from here, the salt from here. It just can't be replicated, I think."

While there have been many interpretations of the diced raw fish dish that he said was traditionally made with shoreline fish before fisherman were able to go in deeper water and catch ahi, Simeon explained, "It's one of those recipes that's evolved as ingredients came to the islands; it's changed. A lot of times now poke is slathered in soy sauce, sesame oil and sesame seeds, but those didn't arrive until Japanese [immigrants] brought those."

When it comes to his favorite comfort food, Simeon immediately chose saimin, which he described as a "humble noodle ramen that feels very Japanese -- but it's distinctively Hawaii with simple clear broth that's similar to dashi, with protein and noodles that are a lot more crunchier and chewy than ramen. It was actually my version of cereal. I never had cereal growing up -- I ate saimin." 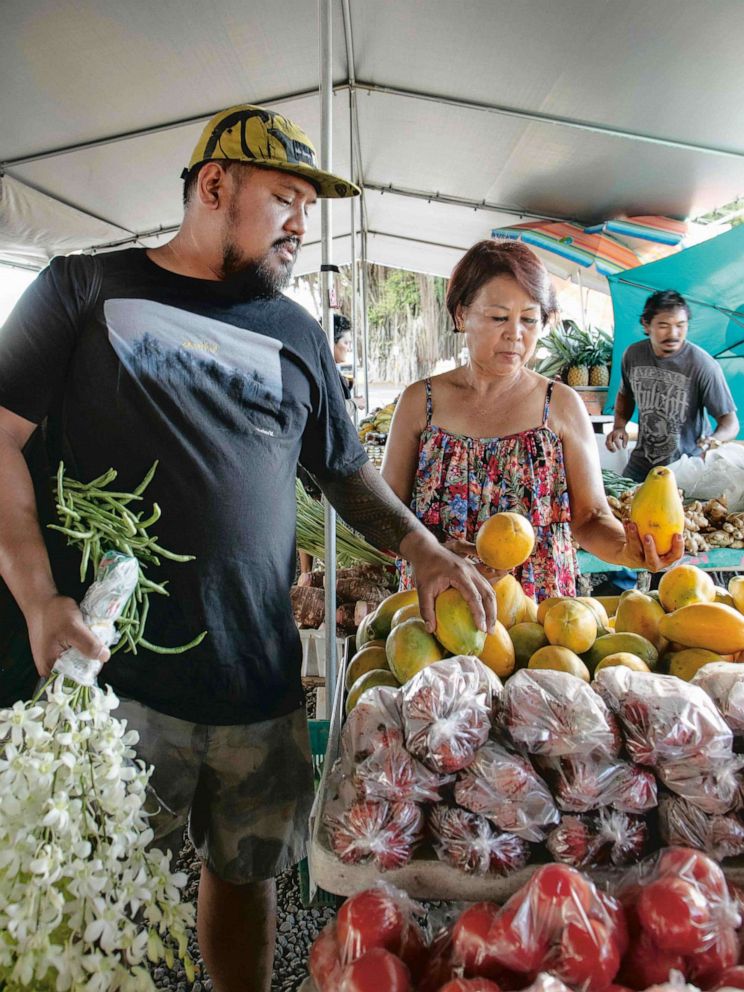 "We're a big Sunday morning eating type of family," he explained of the local food he cooks at home. "We love something that's simmering in a pot overnight and then finished with potatoes, cabbage, seasoned with fish sauce and black pepper. We love soup and rice, too. Especially, like Filipino culture we don't eat baby food, the first foods we feed our kids is some type of soup and rice."

"We also do a lot of grilling and I always take that opportunity knowing we're going to eat those grilled foods for the next three or four days and take advantage of burning that charcoal in the grill," he added with a laugh. "A grilled ribeye leftovers will turn into a chopped steak stir fry or grilled chicken will turn into a kimchee chicken sandwich for the next few days. My kids all love when we grill." 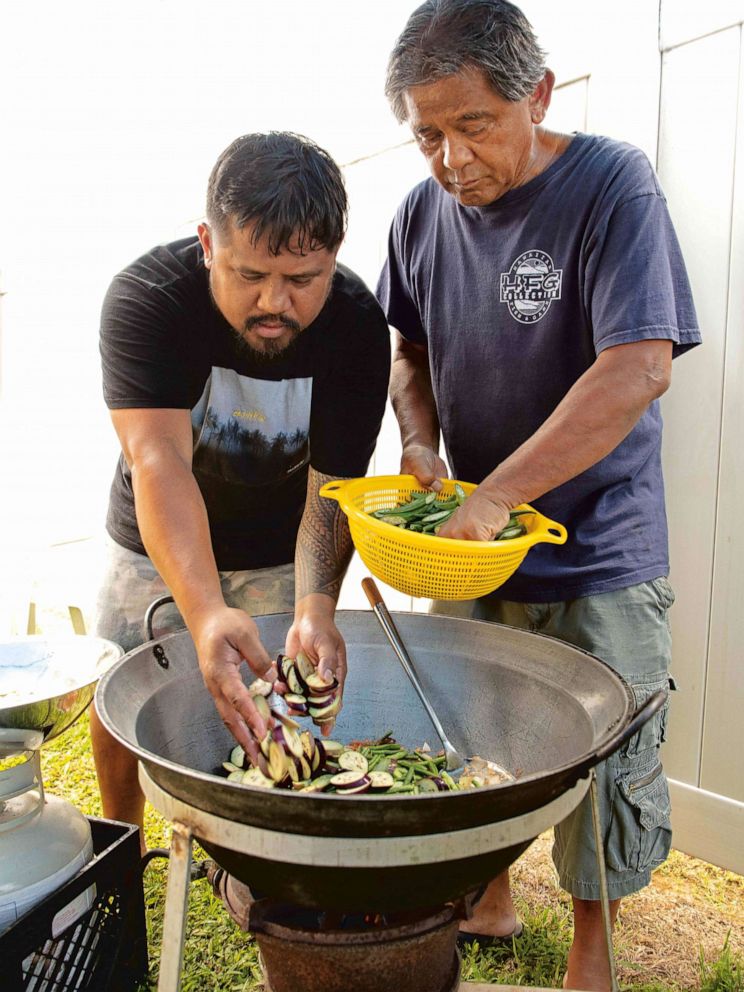 Kevin J. Miyazaki
Chef Sheldon Simeon and his dad cooking together as seen in his new cookbook, "Eat Real Hawaii."

Part of what makes food from Hawaii so unique is "the evolution of a dish that you can see through time," Simeon said.

"There's these pathways of food, you follow it and it changes. Food in Hawaii is not so different, but it is from if you were to follow back to where it came from just because these families try to pull on memories from home, but utilize ingredients that are available," he said. "The lines get kind of blurred. And after you do it for so long it does become tradition in a spot, but that tradition in Hawaii has taken the last 100 years." 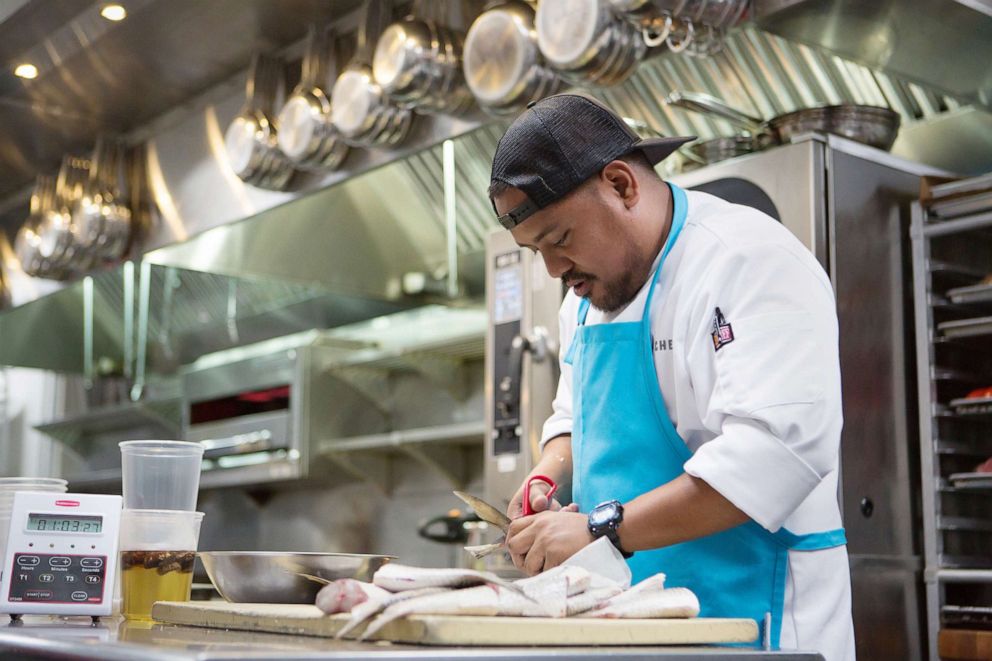 Bravo/NBCU Photo Bank/NBCUniversal via
Chef Sheldon Simeon prepares fish during a taping of "Top Chef," May 20, 2016.

The two-time "Top Chef" finalist, who won over judges and fans alike with traditional Hawaiian ingredients and techniques, recently tackled the next chapter in his storied culinary career with his debut cookbook: "Cook Real Hawai'i."

"Off the bat, I want to shout out Garrett Snyder, who is an amazing human being. This project wouldn't have the success it has and I wouldn't be able to put my story into context if it wasn't for that guy," he said of the food writer who co-authored the cookbook.

"I'm a hands-on working kind of guy, so a cookbook was daunting," Simeon said. "But after 'Top Chef,' traveling the country, I found myself having to explain what really is Hawaiian cuisine and people a lot of times have a narrow-minded view of what Hawaii cuisine is – whether it's the poke or tropical hula girls with Mai Tais and coconuts. I felt there was so much to be spoken about and here we have it."

Simeon said he loved this opportunity to showcase his stories, "like talk about my Korean neighbors or the Chinese lady who has lemons on top of her roof, the diners that serve loco moco -- and there hasn't been a significant cookbook to come out of Hawaii in a long time. We love these islands so much. I'm thankful every single day that I can be a chef here in Hawaii."

"All of this food seamlessly blends together," he said. "We celebrate each other's culture and respectfully be happy of your own ethnicity and also celebrate your neighbors."

The value of generosity and "ohana," or family, in Hawaiian culture is something that goes hand in hand with food.

"In my book you'll see these stories have an act of generosity. The culture was about celebrating each other and food was always respected in that way," Simeon said. "You make enough of something so that you can give to your neighbors; it's so cool to have that. Even my kids know now when we have extra eggplants in our garden we will snip a few and bring it over to our neighbors and then they cook a little bit and it returns back as spicy eggplant. It's just this ongoingness of generosity."

The Maui-based executive chef, who most recently opened Tin Roof, a new generation mom and pop shop with his wife and business partner Janice, said his own kids are starting to cook now.

"It's fun to see them realize that it's not as simple as putting something in the microwave, but I'm getting kind of scared because there will be onions everywhere and herbs from the garden and I'm just like, 'What did you make?'" he said. "But I have a rule that they can't graduate to other foods unless they learn how to properly cook an egg."

His 7-year-old son was the latest to crack the code, but when it comes to getting your children comfortable with the stove, he suggested, "Buy the most expensive pans too -- that nothing will stick on. Because they'll either put the heat on too high or forget it on the stove so you need a good pan that can take a beating." Plus, he said with a laugh, "Somehow when it's time to clean though they all scatter."

Check out even more other incredible profiles from Japanese sushi chefs to Filipino cuisine and Asian-owned food business here for AAPI Heritage Month.