Mrs. Butterworth's and Cream of Wheat are the latest brands to announce plans to reshape their image in the wake of racial protests still happening across the country.

Conagra Brands, the parent company of Mrs. Butterworth's, announced Wednesday the brand has begun a "complete brand and packaging review" of its syrup products, which critics say feature offensive phrases and imagery.

"The Mrs. Butterworth's brand, including its syrup packaging, is intended to evoke the images of a loving grandmother," Conagra said in a statement. "We stand in solidarity with our Black and Brown communities and we can see that our packaging may be interpreted in a way that is wholly inconsistent with our values."

"We understand that our actions help play an important role in eliminating racial bias and as a result, we have begun a complete brand and packaging review on Mrs. Butterworth's," the company said. "It's heartbreaking and unacceptable that racism and racial injustices exist around the world. We will be part of the solution. Let's work together to progress toward change." 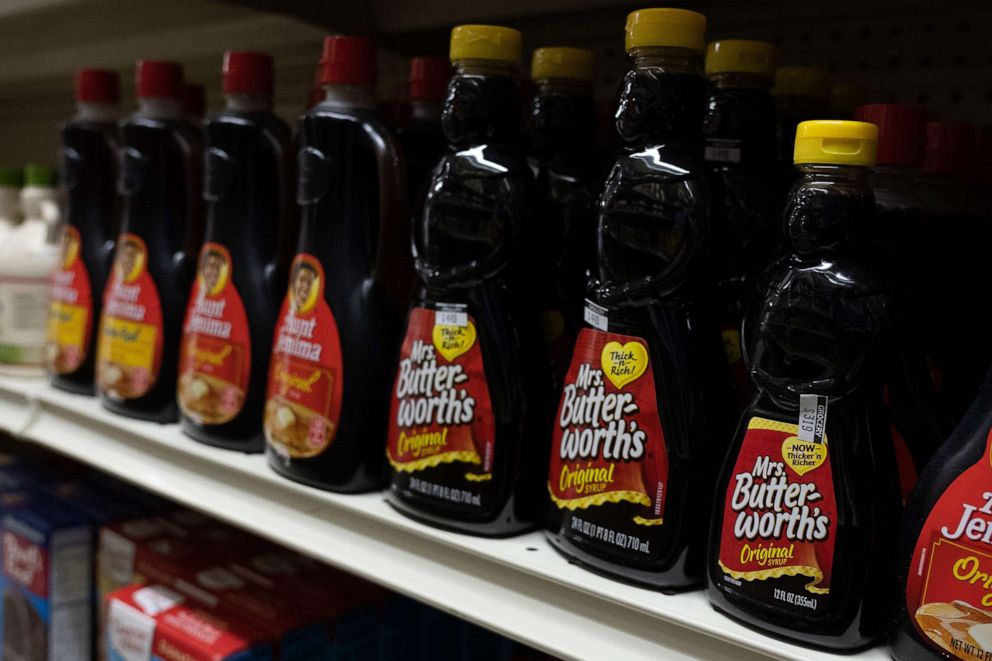 Cream of Wheat's parent company, B&G Foods, also announced Wednesday it would be "initiating an immediate review" of the brand's packaging, which features a smiling black man in a chef's uniform.

"We understand there are concerns regarding the Chef image, and we are committed to evaluating our packaging and will proactively take steps to ensure that we and our brands do not inadvertently contribute to systemic racism," B&G Foods said in a statement. "B&G Foods unequivocally stands against prejudice and injustice of any kind."

Aunt Jemima, the more than 130-year-old breakfast brand that also faced criticisms for being based on a racial stereotype, was the first to announce Wednesday that it plans to change its look.

The brand will be renamed and the image of Aunt Jemima will be removed from its packaging, PepsiCo, the parent company of The Quaker Oats Company, which owns Aunt Jemima, announced Wednesday.

"As we work to make progress toward racial equality through several initiatives, we also must take a hard look at our portfolio of brands and ensure they reflect our values and meet our consumers’ expectations,” Kristin Kroepfl, vice president and chief marketing officer of Quaker Foods North America, said in a statement. “We recognize Aunt Jemima’s origins are based on a racial stereotype."

"While work has been done over the years to update the brand in a manner intended to be appropriate and respectful, we realize those changes are not enough," she said. 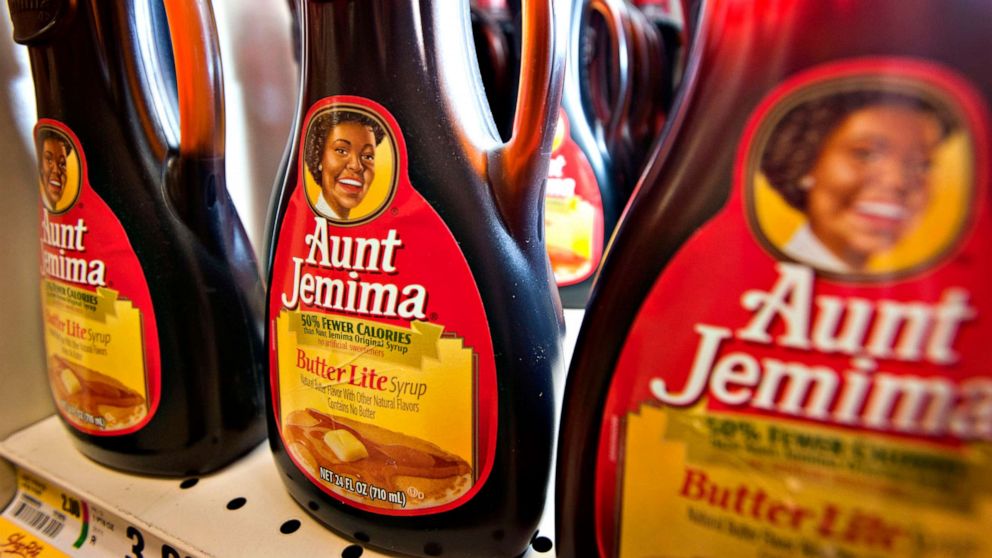 Bloomberg via Getty Images
Bottles of Aunt Jemima syrup are displayed for sale.

Customers will start to see Aunt Jemima's syrups, pancake mixes and other products without the image of Aunt Jemima later this year and a name change will be announced "at a later date," according to PepsiCo.

The company's decision was announced as protests continue to unfold across the country in the wake of the death of George Floyd, a black man who was killed on Memorial Day when a Minneapolis police officer knelt on his neck for nearly nine minutes.

The Aunt Jemima brand was started in 1889 by two men, Chris Rutt and Charles Underwood, who developed a ready pancake mix.

The company brought on a black woman, Anna Robinson, to portray Aunt Jemima starting in 1933. The character was later portrayed by actress Aylene Lewis in the 1950s and 60s.

In 1989, Aunt Jemima’s image evolved to what the company described as a “contemporary look” with pearl earrings and a lace collar.

PepsiCo acquired the Quaker Oats Company and the Aunt Jemima brand in 2001. The company describes the brand now as having “the goal of representing loving moms from diverse backgrounds who want the best for their families.”

There have been calls throughout the years to change the name of Aunt Jemima products, including a 2015 New York Times editorial entitled, "Can We Please, Finally, Get Rid of ‘Aunt Jemima’?"

"This Aunt Jemima logo was an outgrowth of Old South plantation nostalgia and romance grounded in an idea about the 'mammy,' a devoted and submissive servant who eagerly nurtured the children of her white master and mistress while neglecting her own," Riché Richardson, an associate professor in the Africana Studies and Research Center at Cornell University, wrote in the op-ed. "Visually, the plantation myth portrayed her as an asexual, plump black woman wearing a headscarf."

PepsiCo also said it plans to donate a minimum of $5 million over the next five years through the Aunt Jemima brand to "create meaningful, ongoing support and engagement in the Black community."

“We acknowledge the brand has not progressed enough to appropriately reflect the confidence, warmth and dignity that we would like it to stand for today,” said Kroepfl. “We are starting by removing the image and changing the name. We will continue the conversation by gathering diverse perspectives from both our organization and the Black community to further evolve the brand and make it one everyone can be proud to have in their pantry.”

Shortly after the Aunt Jemima move made news, Uncle Ben's, the rice maker owned by Mars Inc., also announced that it too will change its identity.

The company said in a statement Wednesday that it plans to "evolve the Uncle Ben's band." No details were given on timing or exact changes but the company said it is "evaluating all possibilities." 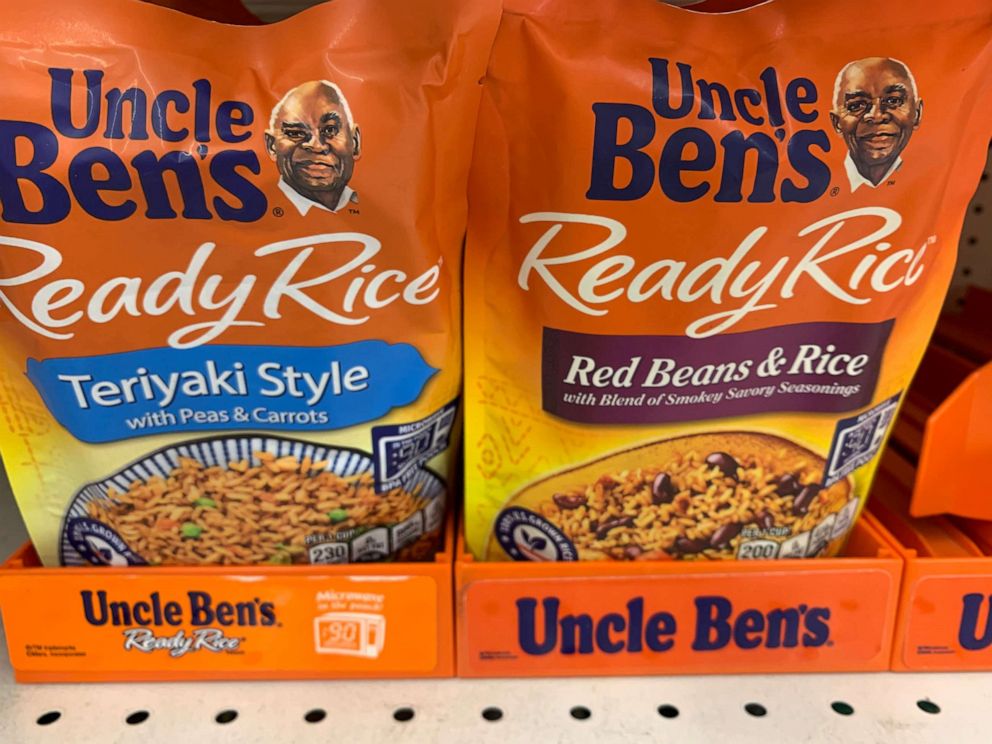 Eva Hambach/AFP via Getty Images
Bags of Uncle Ben's rice are seen on a store shelf on June 17, 2020 in Washington, D.C.

"As a global brand, we know we have a responsibility to take a stand in helping to put an end to racial bias and injustices," Mars said in a statement. "As we listen to the voices of consumers, especially in the Black community, and to the voices of our Associates worldwide, we recognize that now is the right time to evolve the Uncle Ben’s brand, including its visual brand identity, which we will do."

"Racism has no place in society. We stand in solidarity with the Black community, our Associates and our partners in the fight for social justice. We know to make the systemic change needed, it’s going to take a collective effort from all of us – individuals, communities and organizations of all sizes around the world," the statement added.