In the wake of George Floyd's death and protests calling for racial justice, former NFL star Emmanuel Acho is tackling tough conversations about race in America off the field.

"Welcome to the first of hopefully many episodes of 'Uncomfortable Conversations with a Black Man,'" said Acho in his first video, which premiered last week.

"White people have reached to me asking, 'How can I help? How can I join in? How can I stand with you?' So I've created this ... because in order to stand with us and people that look like me, you have to be educated on issues that pertain to me."

Joining Acho for a conversation in the most recent episode was A-lister Matthew McConaughey. The pair talked about the uncomfortable issues of racial injustice.

"I'm here ... to learn, share, listen, understand. Here to discuss some common ground between us, but also (be) exposed (to) the differences between us," McConaughey said. "I'm here to have conversation, hopefully promote more conversations, and, with the end goal being that we take the time we're in now [to] constructively turn a page in history through some righteous and justifiable change."

About 22 million people saw Acho's first episode of "Uncomfortable Conversations with a Black Man," and, since its debut last night on Acho's social media, more than 5 million have already seen the second video with McConaughey, according to Acho. 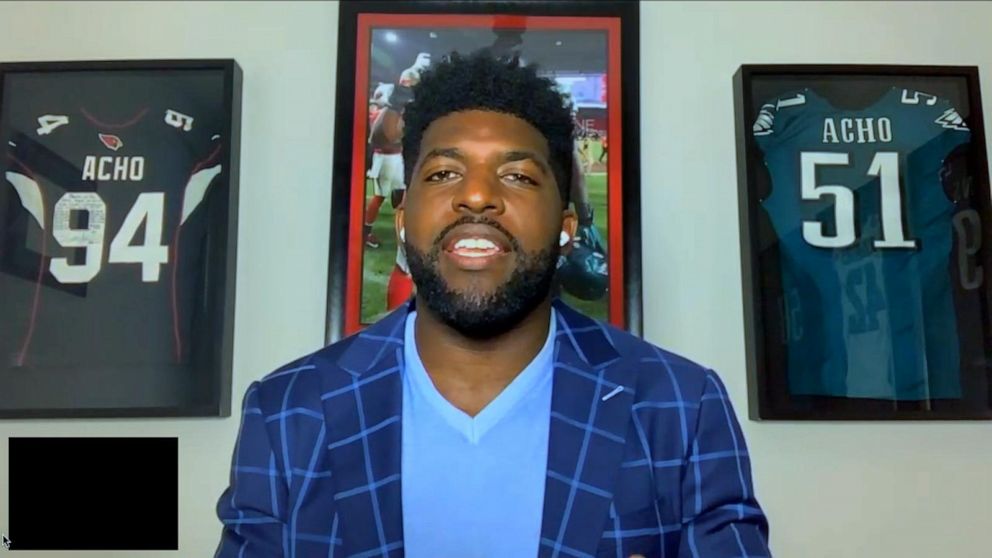 GMA
Emmanuel Acho is tackling tough conversations about race in America in his new YouTube series, "Uncomfortable Conversations with a Black Man."

Acho said the massive views mean "that hearts are open. Minds are ready to turn, lives are ready to be changed," to "GMA," on Wednesday.

"Although it's been far too long, at least the time appears to be on the horizon where we can see true change and the barrier, the racial divide between black people and white people, will no longer exist," he added. "At least it won't exist at the same potency in which it has existed before, so I'm so overjoyed."

As Acho and McConaughey continued, they touched on the importance of actually "living out" the lessons taught to children and the distinction between using the term "black" versus "African American."

"So it's black, as opposed to African American when we're referring to black people because, remember, not all black people are African Americans," Acho pointed out on "GMA." "Remember, black is just an adjective, culturally identifying to one's skin color, very similar to white ... The fact that so many of my white friends, brothers and sisters, are hesitant about using the word 'black,' imagine what that means subconsciously about how we felt about black people over the course of our lives."

"Imagine if we think that black is in some way, shape or form, a derogatory term. Imagine what that has told us. Imagine what is exuded and permeated in our mind of our society over the course of years," he added.

Acho said while listening to him facilitate these uncomfortable conversations is good, it's not enough. "It has to be taken to action."

"What I mean by that is it's not enough to now just allow certain racisms to exist. It's not enough to just listen. My goal was to start a dialogue so that my white brothers and sisters can listen, but now they need to speak" against racism, he said.

"I'm encouraged that our world will continue to coexist, but it starts with education and starts with exposure and continues as communication."