Square just released data about America's iconic dessert, and there's nothing too vanilla about this year's trendiest ice cream flavors.

According to the report, the five flavors that saw the most year-over-year growth in sales between 2018 and 2019 were horchata, "unicorn," sesame, salted caramel and whiskey.

(MORE: This female-founded ice cream shop's treats are what Instagram dreams are made of)

Horchata, which includes rice milk infused and hints of sweet cinnamon, a popular drink in Latin America, has evolved into a popular flavor in the U.S. It's seen 257% sales growth over the past year, becoming the number one trending flavor, according to Square. The growth seems to be tied to the awareness and how the Mexican culture has been embraced in the U.S.

"I think it's because of increased awareness of it and it's a favorite amongst Mexicans, so it makes sense that now more people are aware and exposed embrace it," said Fany Gerson, owner and founder of the popular New York City ice cream shop La Newyorkina. Plus, "It's delicious."

Unicorn-flavored ice cream -- which often includes heavy whipped cream, condensed milk, gel food coloring colors and vanilla extract -- has grown since Starbucks announced back in 2017 it was bringing a Unicorn Frappuccino to the menu. And Bronies -- superfans of My Little Pony -- could also be influencing the 100% growth in the U.S. for unicorn ice cream.

In the state of Nevada, per the report, unicorn has become the favorite flavor. Creamberry, a popular Las Vegas ice cream shop, has become an Instagram sensation with people from all across the world trying its unicorn/cotton candy-inspired ice cream. Creamberry has more than 60,000 followers on Instagram and has become one of those ice cream destinations that goes outside the ordinary.

(MORE: 5 extreme ice-cream shops in New York City that you must try before summer ends)

"The cotton candy has become our most popular flavor. Customers like the cotton candy because of the presentation and looks over the taste of the ice cream from what we've noticed and heard," said Minira, who identified herself as an owner of Creamberry.

Among the other trending flavors, sesame saw 86% increase over the past year, while salted caramel saw a 77% increase and a 58% jump for whiskey, according to the report.

On the flip side, a few flavors are getting a colder reception: hazelnut, bacon and honey are all trending downward, according to the report.

When buying flavors besides the ordinary "classics" such as vanilla and chocolate, customers tend to shy away from the condiments. The cone has come back to life as well, as more people tend to pick the cone over the cup when eating ice cream. 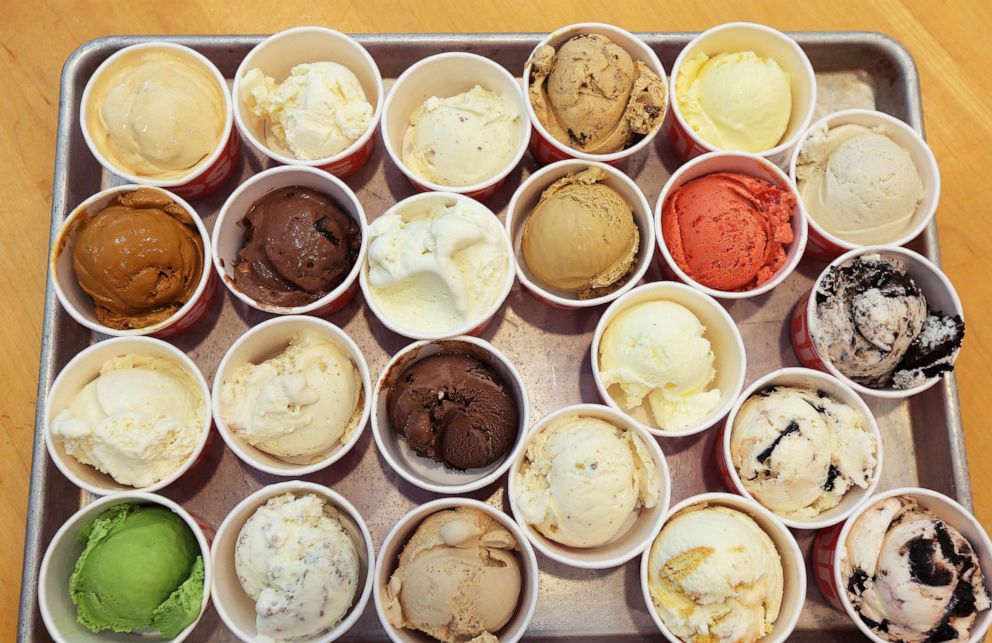 Boston Globe via Getty Images, FILE
In this file image, various flavors of ice cream are displayed at Toscanini's in Kendall Square in Cambridge, Mass., on May 23, 2018.

Vegan ice cream has become a trendy pick over the past couple of years with the increase in health awareness. The sales have increased over 220% from 2015 to 2018 and look to continue to grow, according to the Square report. The vegan category includes options such as ice cream made of coconut milk, almond milk and soy milk, as well as sorbet.

(MORE: Could you handle eating this massive ice cream sundae -- in freezing weather?)

And it's not just treats for humans seeing a uptick. Our four-legged friends are also partaking in more frozen treats, with the report noting dog ice cream steadily climbing from 2017-2018 with 55% more purchases.

During the yearly sales peak in July, chances are Vermont -- the home of Ben & Jerry's -- will enjoy the most ice cream, as it ranks the highest for when adjusted for consumption by population. Behind the Green Mountain State are Oregon, Hawaii, Montana and then Washington, D.C.

And the most popular times to indulge in ice cream? According to the report, lines form the longest during the weekends, and at 2 and 7 p.m. during the day.