Financial challenges could cast a shadow on the first holiday feast of the season, but there are some solutions for Americans looking to enjoy Thanksgiving on a budget.

Inflation is currently at 7.7% and prices on goods have continually crept upward in the food category, which rose 10.9% in the last year, according to the U.S. Bureau of Labor Statistics' latest Consumer Price Index report.

According to the latest numbers, food at home costs have risen 12.4% since November 2021, while the food away from home category -- restaurants and takeout, for example -- only rose 8.6%, leading Wells Fargo agricultural economists to suggest that this may be the year to dine out for Thanksgiving. 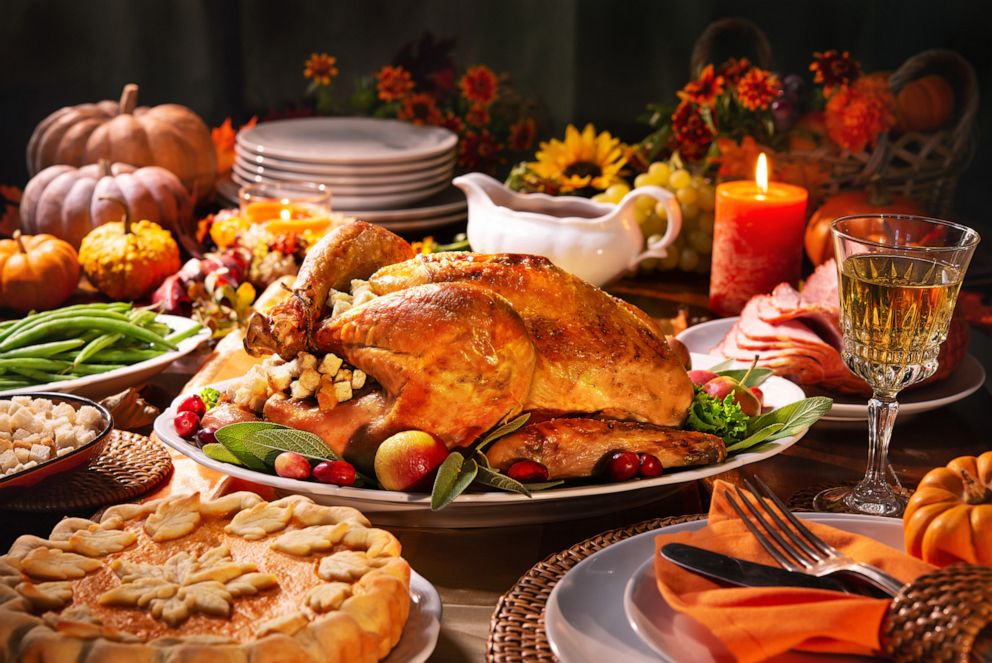 "That narrowing of the gap means some Thanksgiving dishes at your favorite restaurant are closer in price to your food at home which could save you time and energy," the experts wrote in a blog post for the bank weighing the pros and cons of the holiday costs. "In other words, you could spend about the same on a dish at a restaurant as you would preparing it at home."

"Good Morning America" turned to experts for additional insight to help consumers keep the food-centric holiday bill to a minimum.

According to a new Instacart survey conducted by The Harris Poll and shared with "GMA," nearly 67% of Americans who are planning to host or attend Thanksgiving have reported concerns over rising food costs.

The data also showed that of the 83% of Americans surveyed who plan to host the holiday dinner, 68% plan to cook it themselves and 84% of those hosts are looking for ways to reduce the cost.

Whatever your Thanksgiving plans, keep the following things in mind.

How much will turkey cost for Thanksgiving? 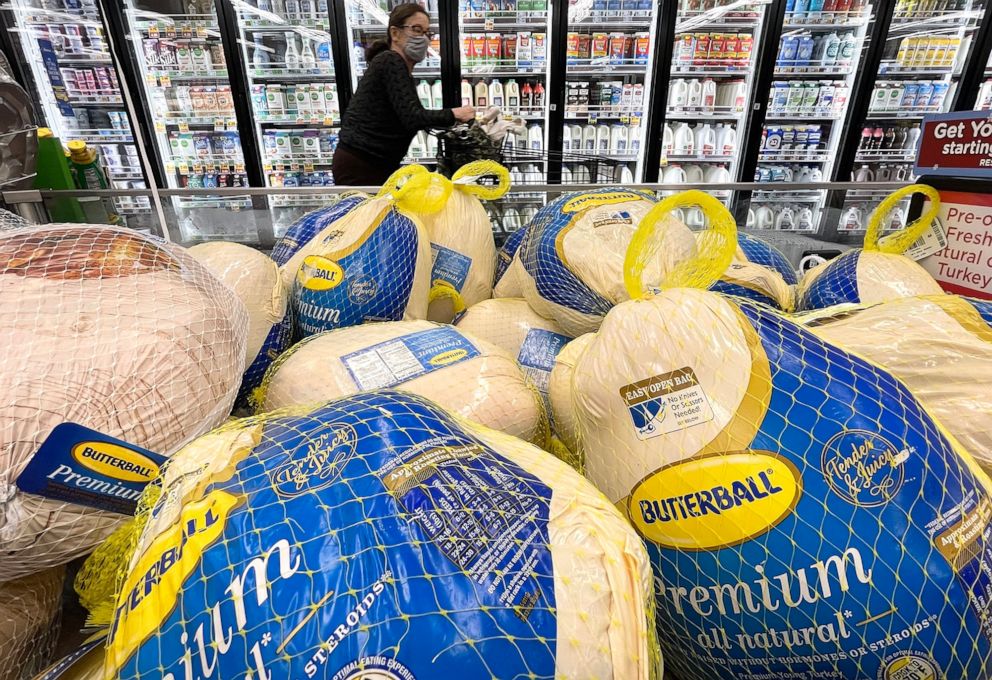 Mario Tama/Getty Images, FILE
A shopper walks past turkeys for sale in a grocery store ahead of the Thanksgiving holiday in Los Angeles, Nov. 11, 2021.

The U.S. Department of Agriculture reported a "broad price range" on frozen whole birds this season.

"Some retailers are beginning to offer lucrative priced whole turkeys, enticing the consumer to their doors," the agency stated.

Turkey was forecast to be 23% more expensive this year, according to the USDA, which suggested consumers cooking at home should buy their turkey early.

After new outbreaks of the Highly Pathogenic Avian Influenza (HPAI) last month, the USDA said "turkey production is lowered for the remainder of 2022 and the first half of 2023. As a result, turkey prices are up and production expectations have been lowered."

"While production has been well below typical levels this year as a result of HPAI, the storage data suggest that producers have prioritized building up supplies of whole hens in time for Thanksgiving," an October poultry outlook report stated.

What to cook instead of turkey this Thanksgiving 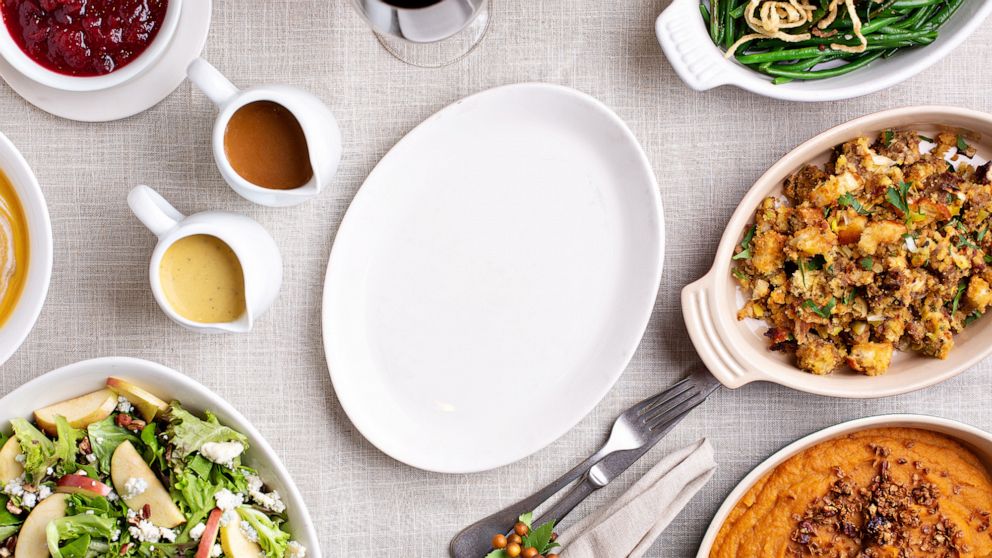 With the price of turkey per pound up nearly 28% from last year, according to the USDA, many hosts may decide to rethink the centerpiece poultry. While the initial thought may be chicken, keep in mind that due to a widespread avian flu outbreak that also affected those birds, prices may not be much more cost-effective.

That's no problem for the 66% of American eaters surveyed in a new food trends report from Campbell's that found side dishes reigned supreme over the main Thanksgiving entrée.

"In those cases and as a great way to cut back on costs, you can skip the full turkey and save money by simply serving turkey breasts, wings, or legs instead," she continued. "Alternatively, you can serve another more affordable protein like a chicken or Cornish hen to enjoy with all those delicious sides." 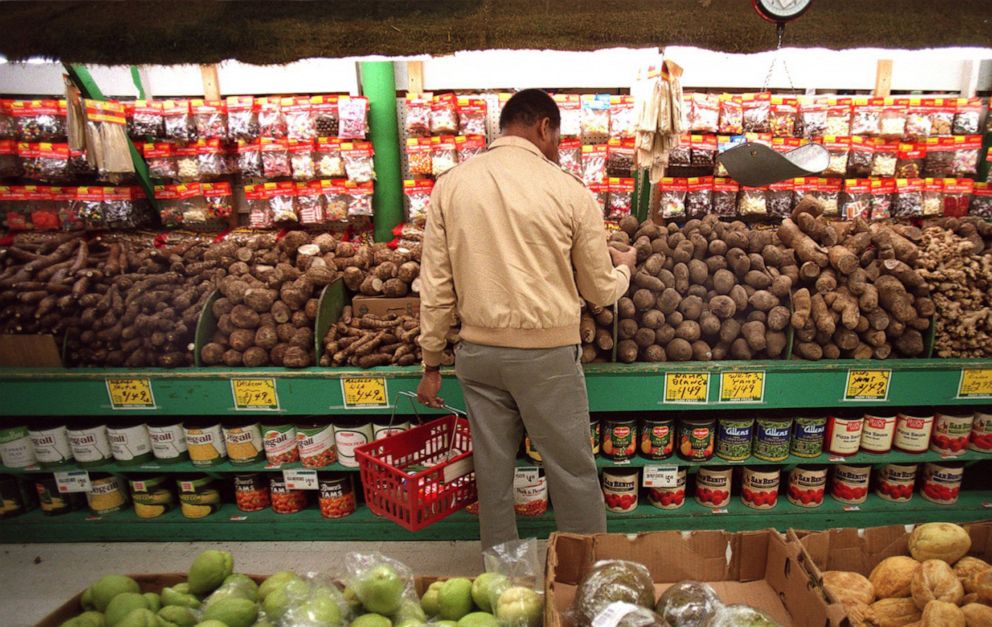 Boston Globe via Getty Images, FILE
A shopper inspects the yams while food shopping at in Boston, April 14, 2021.

Instacart found most customers shop on the platform the day before Thanksgiving, with a majority of those containing fewer items and last-minute or forgotten ingredients.

Additionally, shopping hits a peak on both Sundays in the two weeks prior to Thanksgiving.

"Place your orders or make a trip to the store Tuesday through Thursday the week before Thanksgiving because the middle of the week always sees the lightest amount of foot traffic," Romaniuk said. "Avoiding the busy weekends and Mondays will help ensure you're able to get everything you need on your Thanksgiving shopping list."

She also recommend people get a head start by shopping for non-perishable and frozen ingredients in early November.

"Starting early also allows you to take advantage of more sales and deals," she explained.

Ways to save on groceries this Thanksgiving

Mario Tama/Getty Images, FILE
A shopper walks past turkeys for sale in a grocery store ahead of the Thanksgiving holiday in Los Angeles, Nov. 11, 2021.

Romaniuk suggested finding and using coupons. "As you shop for the holidays, take note of which items are on sale and plan around some of those ingredients," she said.

"If you're someone who typically stocks up on pantry staples like pasta, soup stock, canned green beans, frozen veggies and fruits, and more over the past year and have yet to use them, now is the right time," she said. "Cut down on your Thanksgiving grocery bill by taking note of what you already have, and then make a list and be calculative when it comes to what and how much you need so you don't over-buy."

She continued, "Once you figure out what you actually need, creating a precise budget will help you stick within your means and avoid over-purchasing."

Below are the top 10 items that Instacart found were most purchased on the Wednesday before Thanksgiving.

Cheddar, more than any other item, was purchased the most on the Wednesday before Thanksgiving when home cooks are prepping dishes like mac and cheese, charcuterie boards or other dairy-forward dishes.